Restoration of a vintage Humanatone

I found a vintage Humanatone in a rather good shape, but totally oxidized. Since this model is very common (it dates from the 20-30's and is the most spread), I decided to practice a « hard » restoration on it, without much qualms.

The instrument was dark grey - oxidized nickel - except for the solderings, but the overal shape was good, and I just had to flatten a bit the mouth shield with a jeweller anvil and a small leather mallet.


The stampings were very crisp, and there are still evidences that this instrument was nickeled. The main concerns are two deep rust spots. One on the side of the air collector in the nose saddle, and one at the side of the air exit. These can be cleaned and stabilised, but there will still be some metal missing there.

The first step was a general cleaning, first with a bath in deoxidizing product (Rustyco), then with fine steel wool (0000) soaked with another product called MPU. The top layer of oxidation was removed this way. The most difficult was, as usual, the inside of the air collector.

I began to remove the coat of oxidized nickel with the steel wool, but it appeared to be very, very slow. It would have taken ages — it took me 2 hours only for the top of the air duct...


...So I opted for the power solution: deoxidization by electrolysis with an activator. I did it with an electro-pen powered by a DC supplier at 6V. The work went easy and efficient, and I reached the bare and vulnerable original tin.

The next step was to remove any trace of grease, including the one I brought by touching the nose flute with my fingers. The level needed is such that water doesn't form drops on the metal, but can be evenly spread on the surface. To achieve this task, I used again my electro-pen with a cleanser electrolyte. It was time to use gloves to manipulate the Hum'.

After finishing all tose cleanings and degreasing, the inside looks dull but totally free of rust. Also, all the rust has been removed from the damages spots. The metal has been digested, and won't grow back, but once protected, the disease sould be stopped.

Now that the Humanatone was totally desoxidized and degreased, the metal was bare and very vulnerable. If fact, as soon as it has dried, the oxidization started again. So, better not to wait to long before the plating.

By the past, I had practiced several electroplatings, with a correct result. But I've learned since that my nose flutes weren't prepared enough, and also that I didn't heat the electrolyte. Indeed, the nickel sulfate works far better and quicker when heated at around 140°F/60°C. More, the solution has really to be constantly stirred.

This time, I used my brand new magnetic hot plate stirrer (luxury!). The current was provided by my DC supply, set at 4.5V. This time, I used several nickel anods, instead of one only. I decided to set up my lab outside, to avoid to breath the gas emanations. My installation looked very professional and that's a sign of being on the right way :)


Heating time. I didn't want to push the current before a decent temperature of the electrolyte. I began when it reached around 120°F/50°C. On the picture below, one of the four big (square) nickel anods, hung by a titanium wire (titanium doesn't react and doesn't spread parasitic ions that would cover the nose flute). Those wires were linked together with external wires connected to the DC supply (Off at that moment). The Humanatone was directly hung by a crocodile clip, and linked to the power supply. 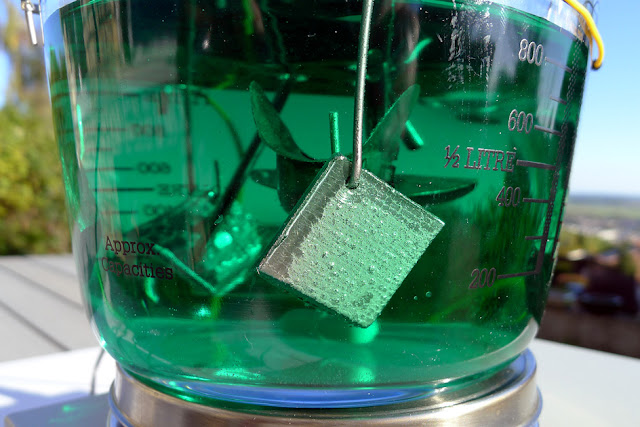 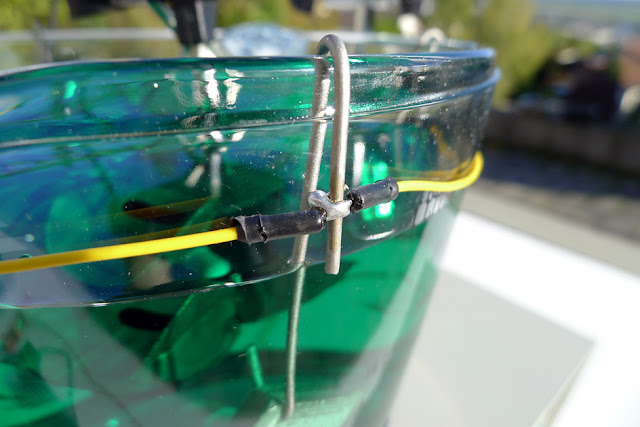 When the temperature got sufficient, I powered the supply, and fine bubbles (Get27 in champagne?) immediately formed. The process had begun.


I changed the nose flute position (I should say the crocodile clip position) every quarter of an hour and let the electroplating work for 2 hours. After the first 15 mn, the nickel coating was already easily visible, with its yellowish silver color (compared to the blueish silver one of the bare tin). And after 30 mn, the job seemed done. But I wanted to get a thick plating, so I did the job as planned, during 2 hours (it was too much, 90 mn would have been better).

After apllying the thick coat of nickel, it was time for the last buffing, with a metal polish and sealant. 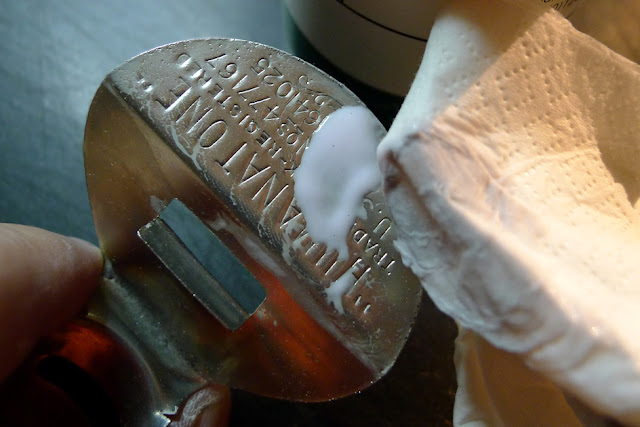 Well, the result is very satisfying. For sure, the spots were the metal has been digested by rust are still visible, as are the little flaws (scratches, etc.) that were on the flute when I got it. Also, I exagerated a bit on the plating time, and some tiny flaws appeared because of the excess of nickel... But all in all, this Humanatone is beautiful now, restored in its nickel coat, and protected for long.


For sure, the most satisfying and rewarding is to make a comparison Before/After... 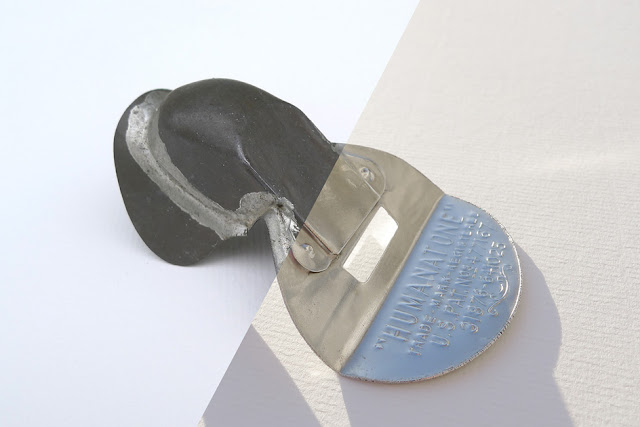 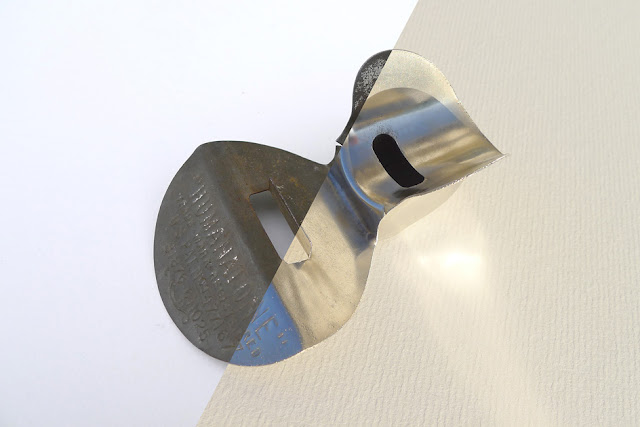