I lengthily hesitated. Should I keep the Cello-Phone in her state or clean it. The fact is that patina is part of the history and soul of an object. But regarding a metal object that oxydizes, the question is a bit different: Is the patina protective or destructive? Would it have been a vintage japanese lacquered bowl, I surely wouldn't have touched it. But in the case of the Cello-Phone, there were nasty traces of corrosion. 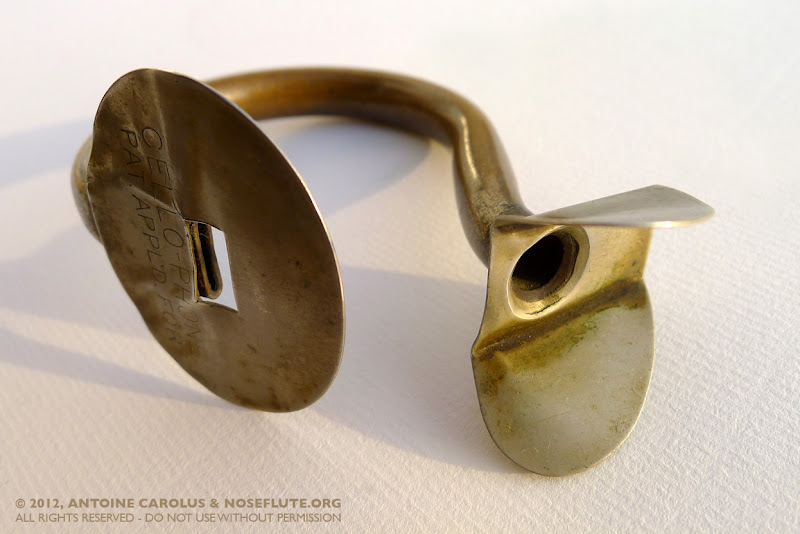 More, I noticed that the patina was actually a coat of tar, probably a mix of smokes and grease, becoming bogged with dust and crud. So, I took the decision to clean it. With tepid and soapy water first, then with diluted metal cleaning product. I also cleaned the inside of the tube with smoking pipe cleaners (scratchy then fluffy) and got deciliters of deep black liquid before getting clear water back. Finally, I buffed the instrument with a soft cloth, and applied lemon oil all over it (and inside).

What a discovery! Until then, I thought the Cello-Phone nose saddle and Mouth shield were made of brass... and they are nickel or nickel-plated pieces! I also thought that the long tube was tin made, plated with copper... no, no, no! It is a brass tube, which was probably electroplated with nickel, since traces still appear! Big big changes!

I stopped my "restoration" there. I do not intend to re-plate the nickel, nor restore the solderings. More would be too much. 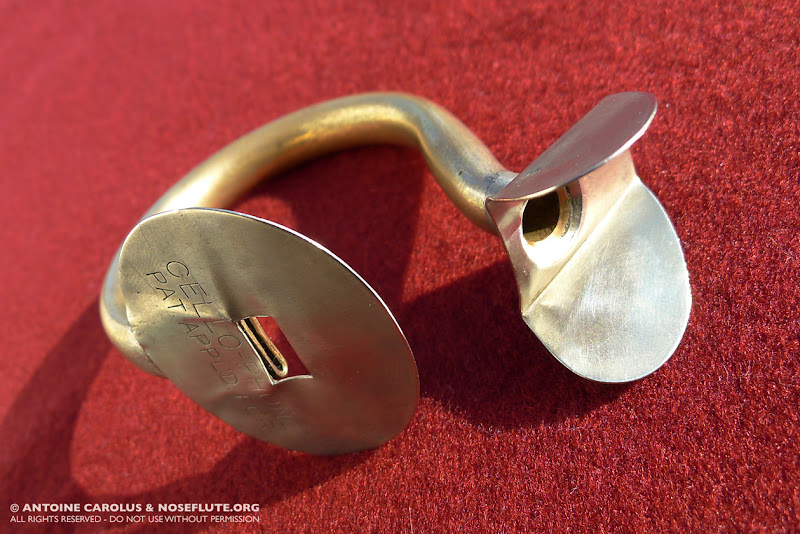 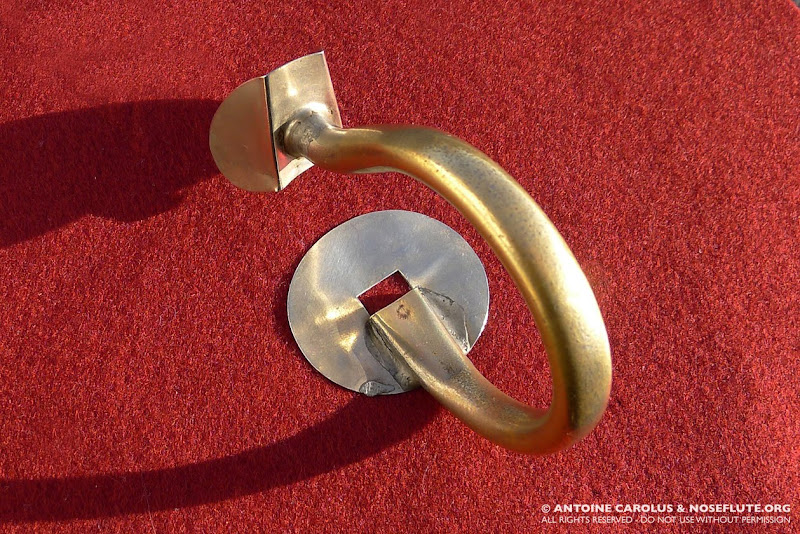 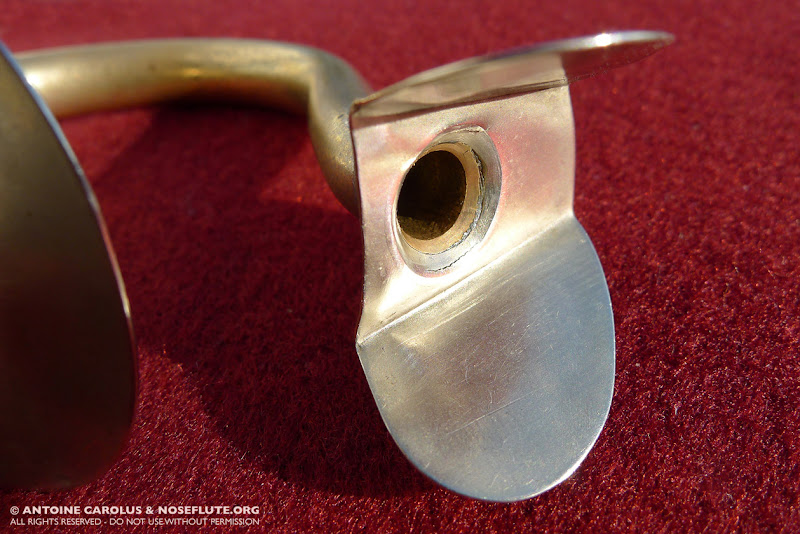 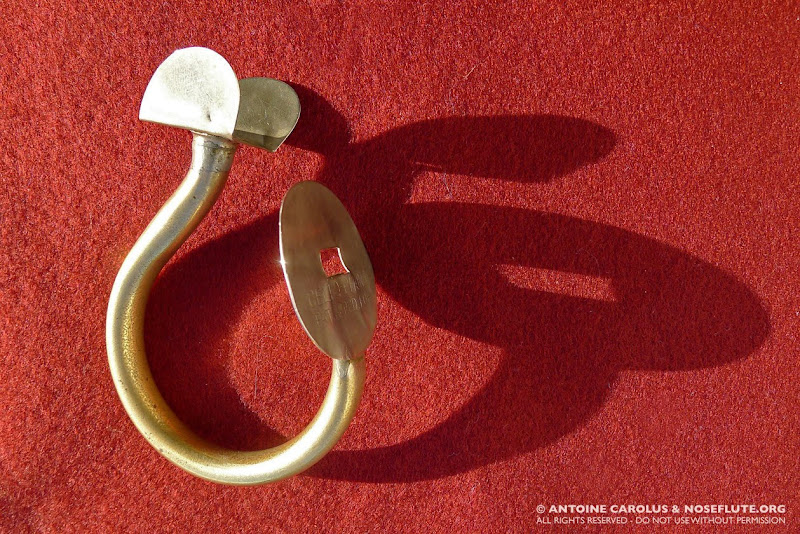 Needless to say that the playability has been greatly improved, probably thanks to the tube cleaning. The sound is still weak, dull and windy, but the bandwidth has enlarged and the attack got a bit sharper: 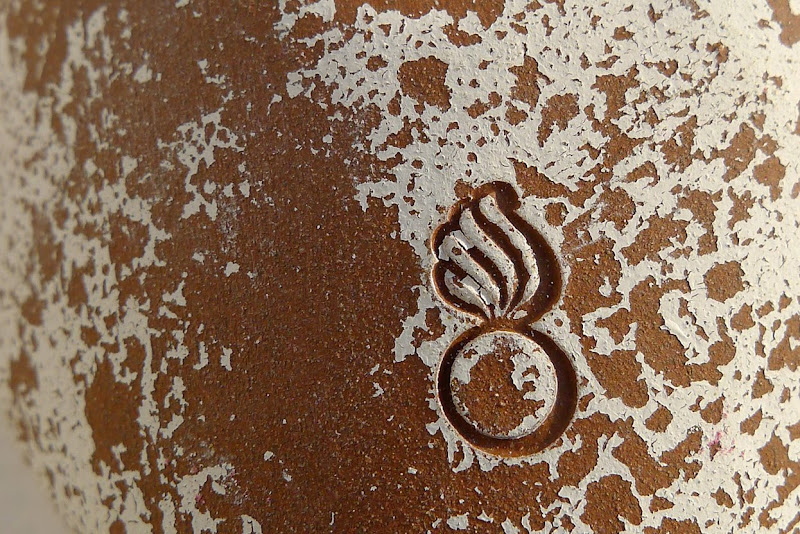 Some handmade clay Bocarinas™ that were used while designing the CAD modelling for the ABS version, by Chris Schuermans. Notice the variations of the mouth shield shape, from rounded edges to angled ones: 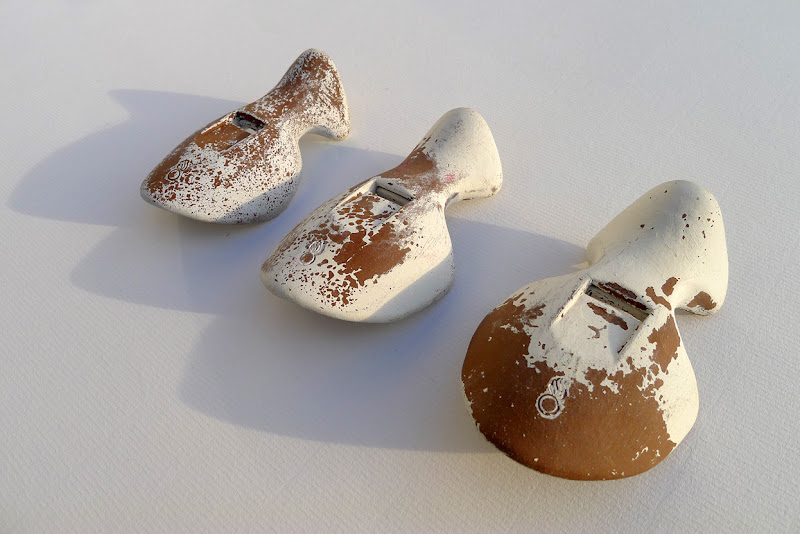 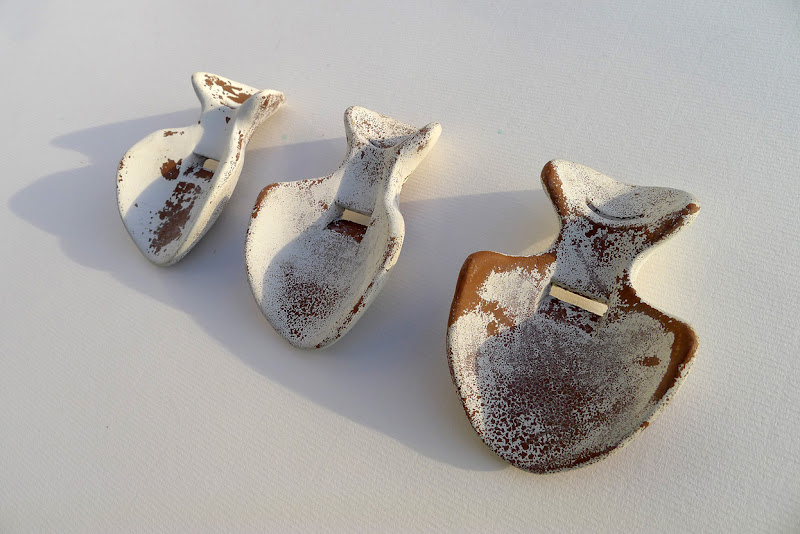 « They are plain terracotta that I painted to make them look more like plastic to get people’s opinions. Later I tried to burn away (fired to 1,000°C) the paint but it left a whitish residue – probably a mineral filler in the paint. »

Review: The Incredible and Mysterious Cello-Phone!

What does this thing do on a nose flute blog? Is this a vintage brass peg to hang your coat on a freshly painted wall? 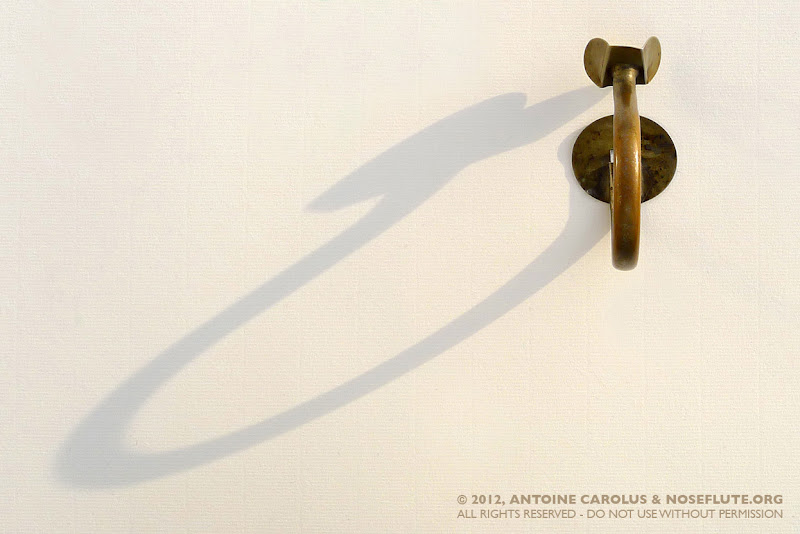 No no no... It is the most incredible nose flute ever built, the Cello-Phone!

I got it from Mr. Bruno Kampmann, President of the ACIMV (Association des Collectionneurs d'Instruments de Musique à Vent - check this post please), who kindly accepted to separate from it, in order to help completing the consistency of my collection. Real big thanks to Bruno!

It's been more than a year that I knew the Cello-Phone existence, and since then, have attempted many researches to find pieces of info about this nose flute. All went totally fruitless. Nobody has any clue about it, none had never met such an instrument. The only objective datum is stamped on the mouth shield: "PAT.APPL'D.FOR", meaning the Cello-Phone has an anglo-saxon origin.
Even this administrative form is of no help in dating precisely this UFO (unidentified Fipple Object!). 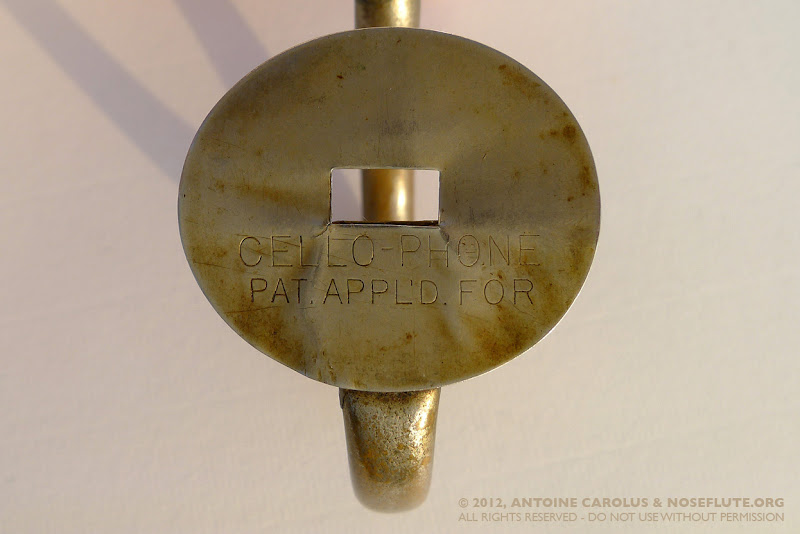 For sure, I searched patents through US, British, but also German, French, European databases, with IPC numbers or with loose keywords... Nothing. The name is unknown by antique newspapers and ads, and the internet is totally mute. Naught! Nichts! Rien! Nada!

The Cello-Phone is an incredible brass nose flute composed of 3 major parts: A nose saddle for collecting the air flow, a long tube as air duct, and a round mouth shield with a rectangular hole for fipple.

The nose saddle is an oval plate of brass that has been bent following its thirds to shape a rest. The air entrance is perfectly round and connected (soldered) to the tube. 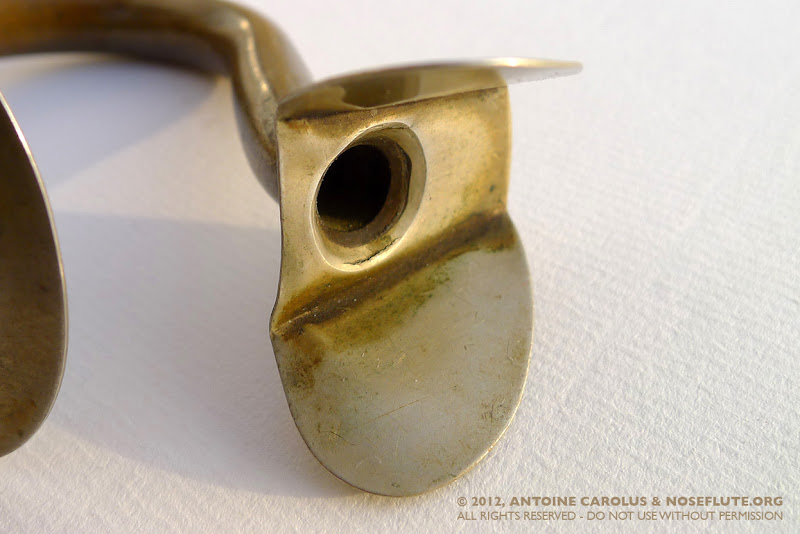 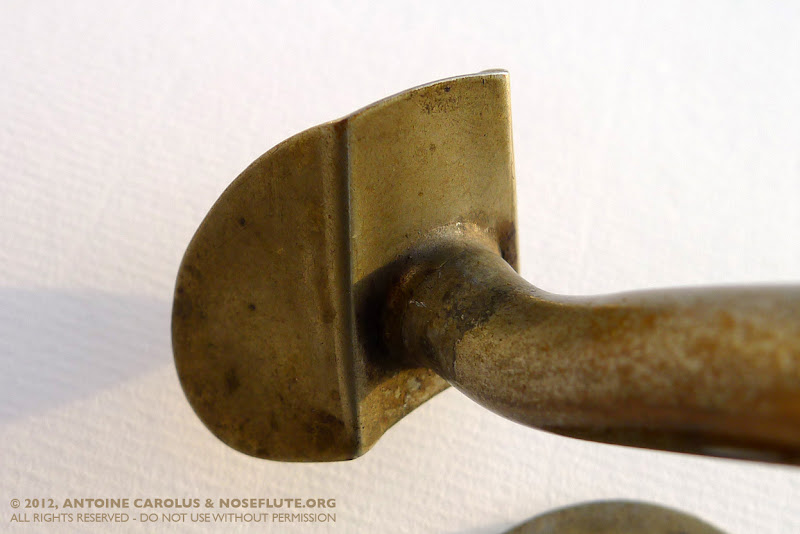 The air duct is the most stunning part of the flute. It seems to be made of iron, having been plated with copper, and is a long tube, rounded to follow an open circle (diameter 10mm, length 185mm). You already caught it: wheteher it's an air way, it's also a handle! 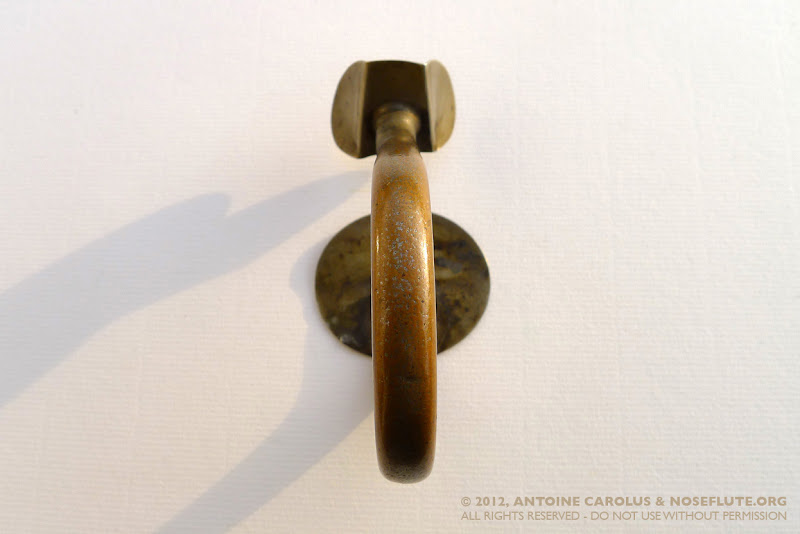 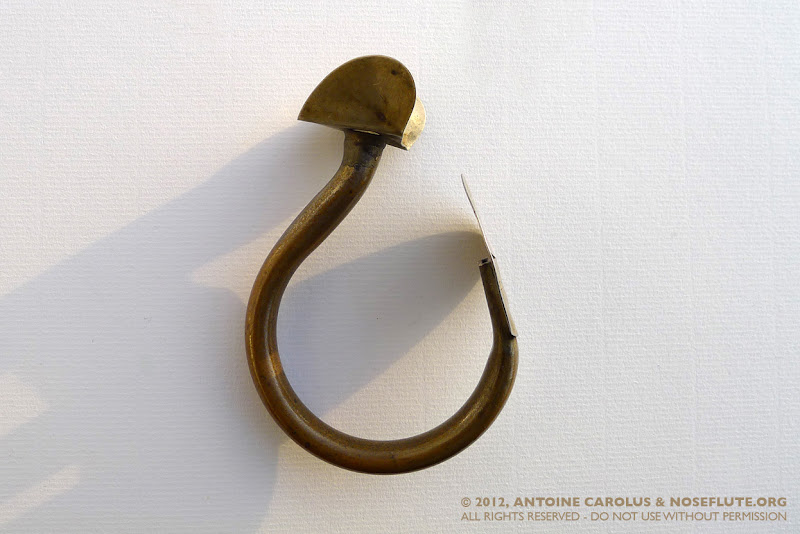 The tube has been flattened at the other end and soldered onto the shield, just under the mouth hole. 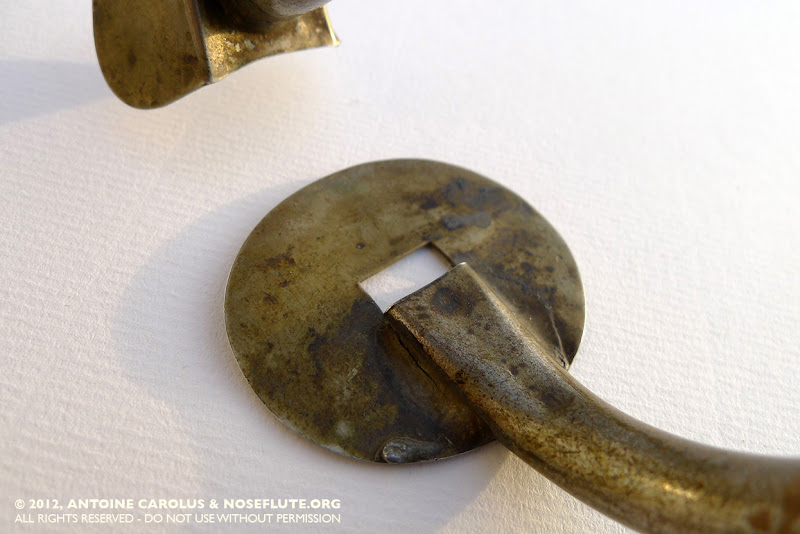 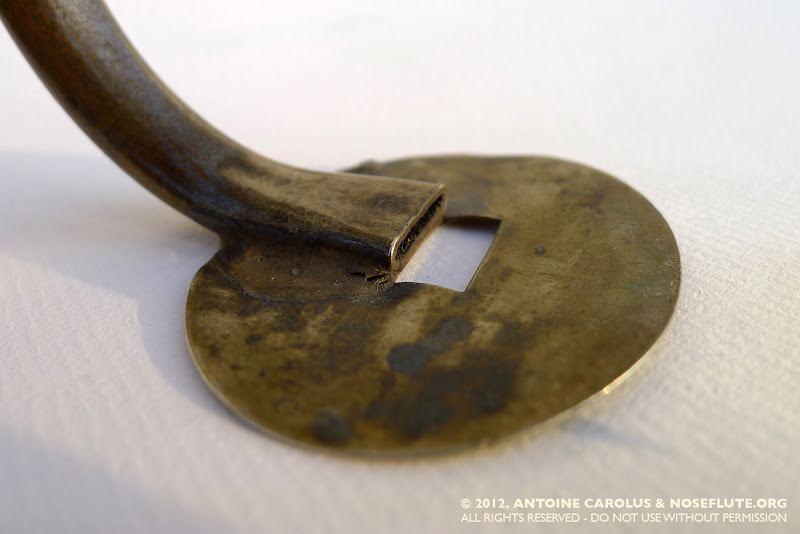 Indeed — and it's another Cello-Phone singularity – the fipple is positioned upside-down: because of the instrument configuration, the air flows upward to meet the labium! The mouth plate is round, not perfectly circular, but ellipsoidal. 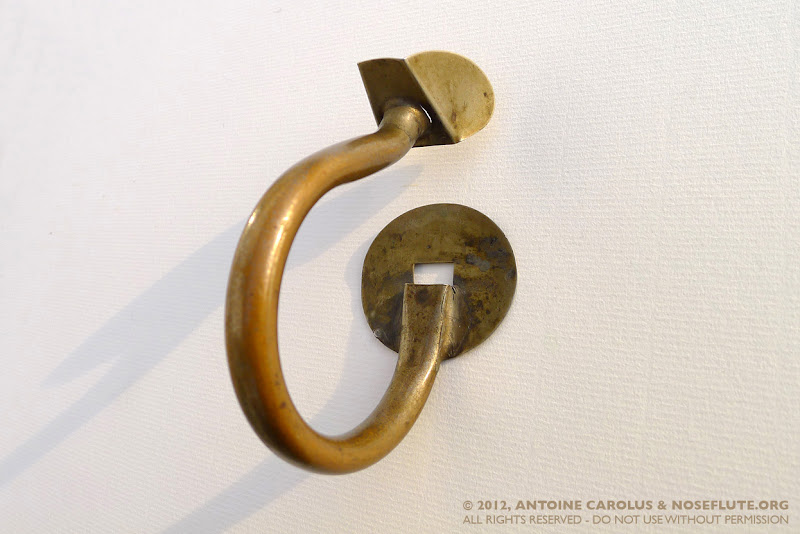 So, the Cello-Phone is a singular instrument. Brass and iron made, with a huge handle and a unique shape, a reversed labium... And those features cannot be linked to any another known instrument that would have helped for a datation.
However, it looks very antique. In the 1920's, for instance, all the metal nose flute had a rather similar shape. Made of stamped tin plate, they were more or less imitations of the leader: Humanatone. And the Humanatone shape was the fruit of some ergonomical, technical and producibility evolution: The 1891 Carter's Nasalette was strange, not very efficient and a bit uncomfortable. The 1899 Couchois' whistle corrected some of the Nasalette design flaws, and the 1903 (Stivers') Humanatone abandoned the mouth tube system for a comfortable mouth shield.

Contrarywise, the Cello-Phone looks totally out of the Humanatone "modern design" advances. However, it already offers a nose saddle (and not a hood) and a flat mouth shield. It is probably posterior to the Humanatone, but not much. I would risk to date the Cello-Phone from the 1910's, with no certainty though.

Where did its name come from? The instrument doesn't look nor sound like a cello. Might it have had some relation with a cell? Or with the name of its inventor? Was it a pun with the cellophane which was invented in 1908 [some nose flutes were produced in celluloid, but not before 1920]? 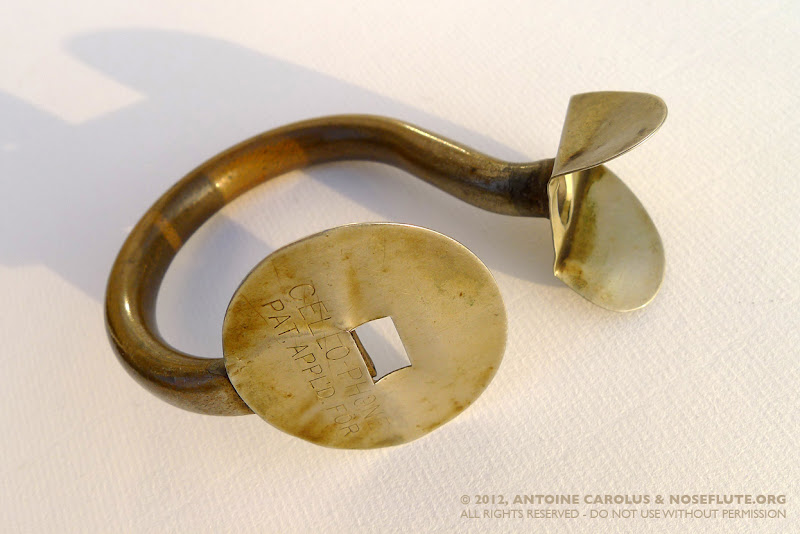 As an instrument, let's immediately say that the Cello-Phone is not a good nose flute, and this is the result of age, but also of several points of misconception.

The venerable instrument is torn is some places, notably at the junction of the nose rest with the tube. There is an small air leak from there. But the flow is also weakened because of the nose saddle shape itself. I could probably modify the wings angle to reduce the gaps, but won't certainly do it!

Then, the tube duct, as funny as it is as a handle, is a very bad choice on a musical point of view. The air has a so long way to go through before getting split by the labium, that there is no real compression by Venturi effect, and certainly no sound attack.

Finally, the tapered end of the air duct is not flat enough to produce a thin air blade.

All in all, the Cello-Phone is a weak nose flute producing a rather dull and windy sound. It is slow in response, and ranges its tonalities in a rather narrow bandwidth, with no low basses and no real sharps.

But on a historic point of view, the Cello-Phone is the most desirable nose flute, extremely rare and so singular! A must for a collector!

Here is a very short sound sample (I did my best with this difficult and ingrate instrument, but I wanted to shorten the pain :): 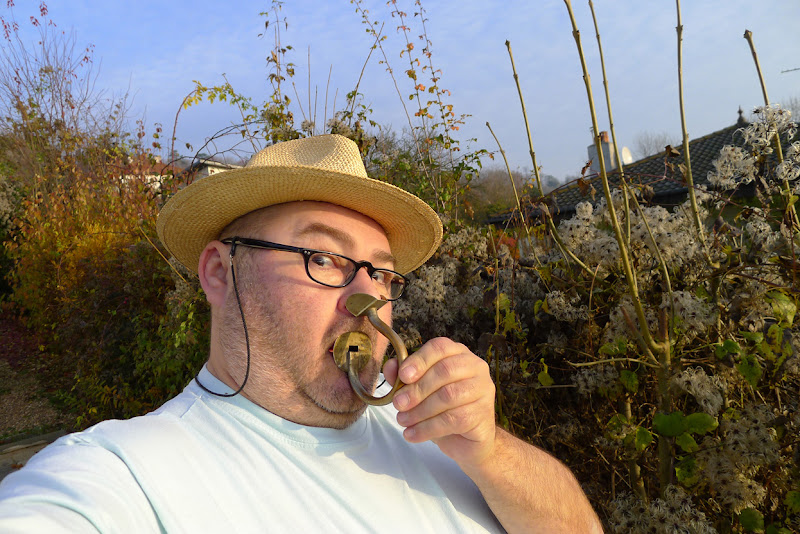 The Nose Flute Hall of Fame

The Nose Flute Hall of Fame is a virtual institution which goal is to celebrate nose flute producers', promoters' and performers' memory. It has been established 2012 and is administered by Noseflute.Org