There was (at least) one German metal flute which appeared in the end of the 20s or the beginning of the 30s. Very comparable to the original Humanatone, with very minor differences (the length of the mouth cap, the shape of air-duct wings and their fixing system, and the shape of the nostrils hole). 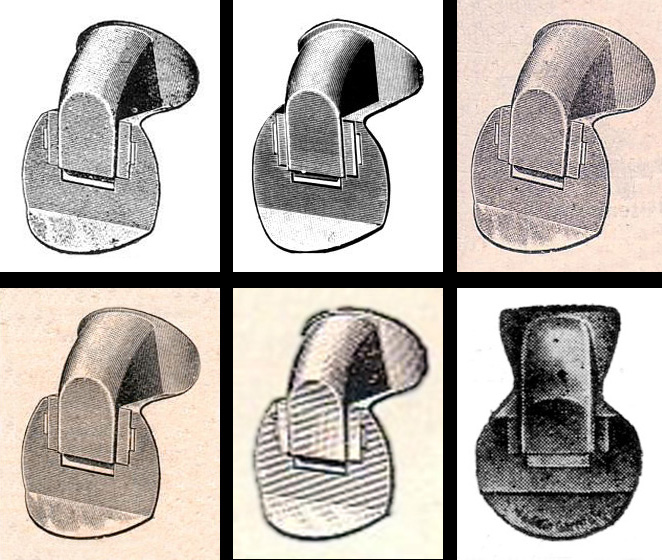 Here is the Gebrüder Schuster page : 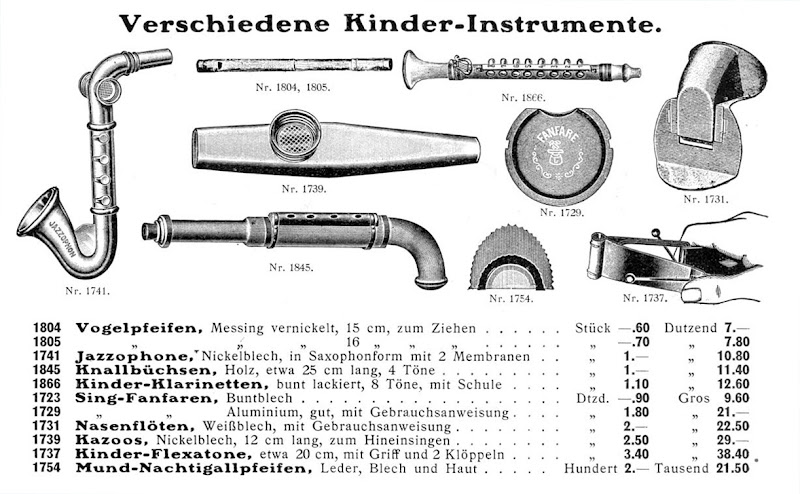 If you look closely at the Max Adler picture (the last of the 6-series), it will appear to you that something seems to be written on the base of the mouth cap.
The flat part of the air duct cap seems shorter than on the other drawings.

So, are there two different German nose flutes ?

Well, I have two old flutes which correspond exactly to the drawings. The first one, with no stamp on the mouth cap was sold to me in Danemark as "a german flute". The second one, shows a stamp "Made in Germany" and comes from USA.

I took all the measurements possible, and can affirm those 2 nose flutes are absolutely superimposable, on any point, except the stamping "Made in Germany".
I don't know if one is a later model, or if the stamped one was destined to abroad market... 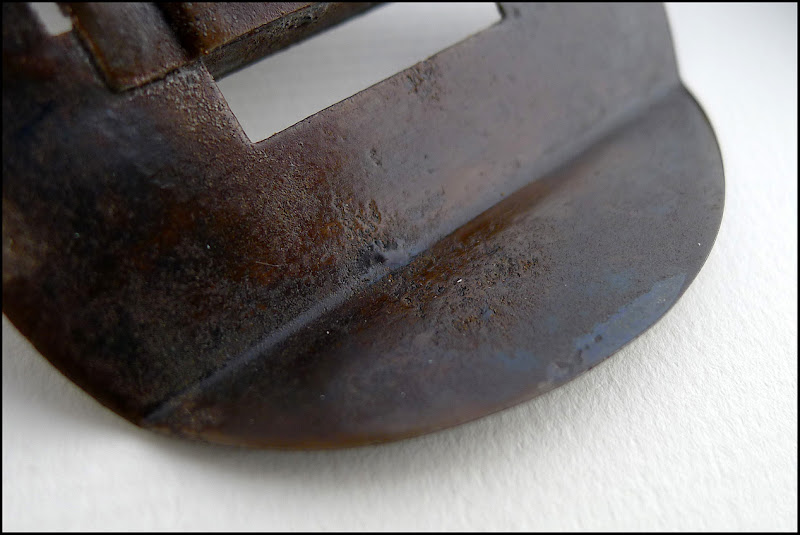 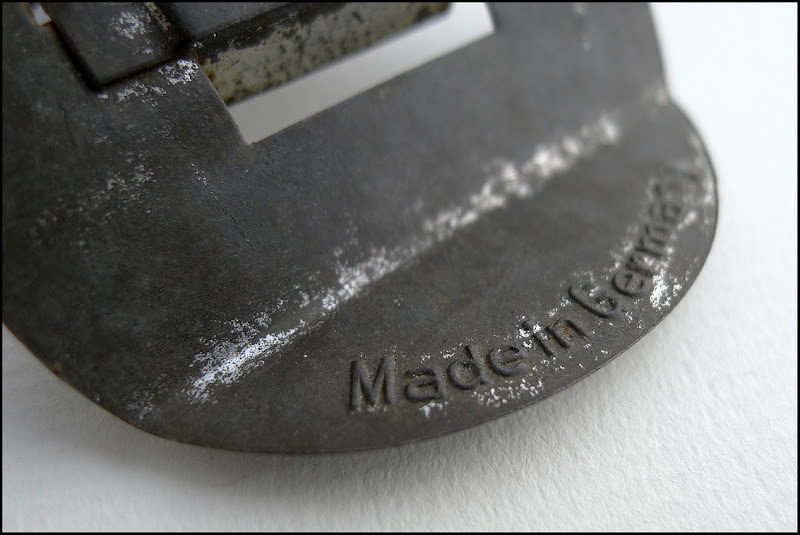 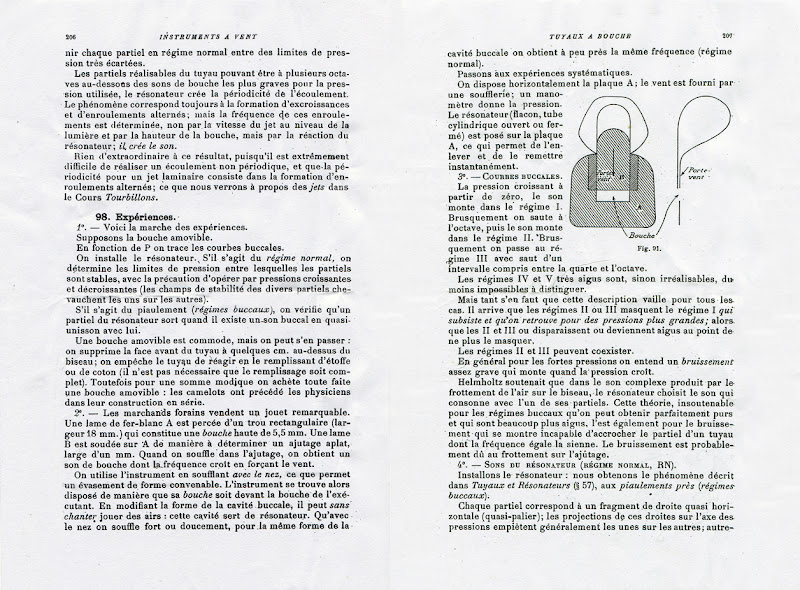 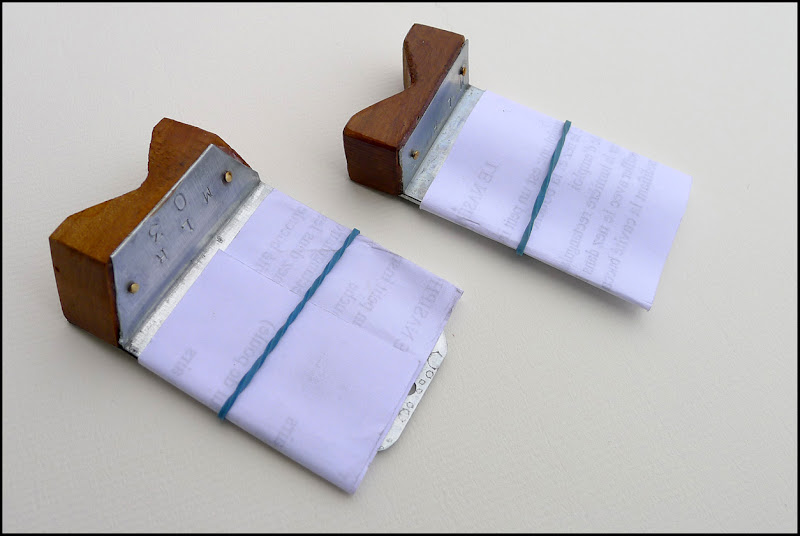 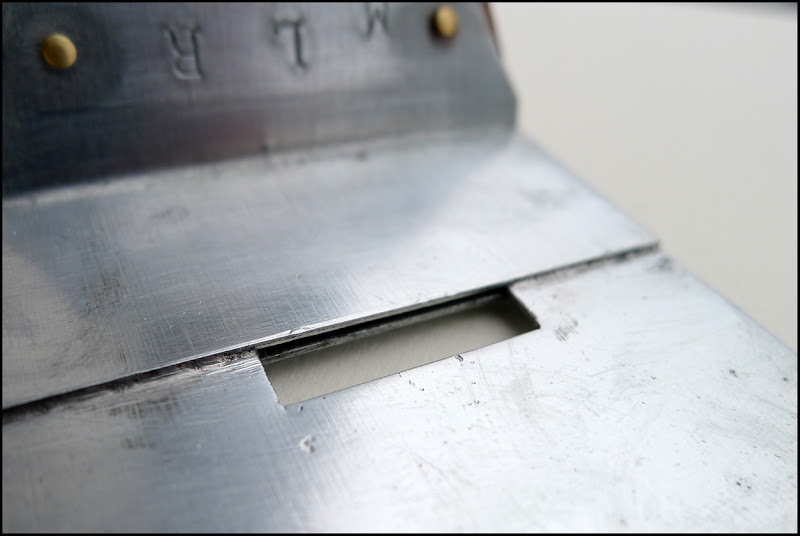 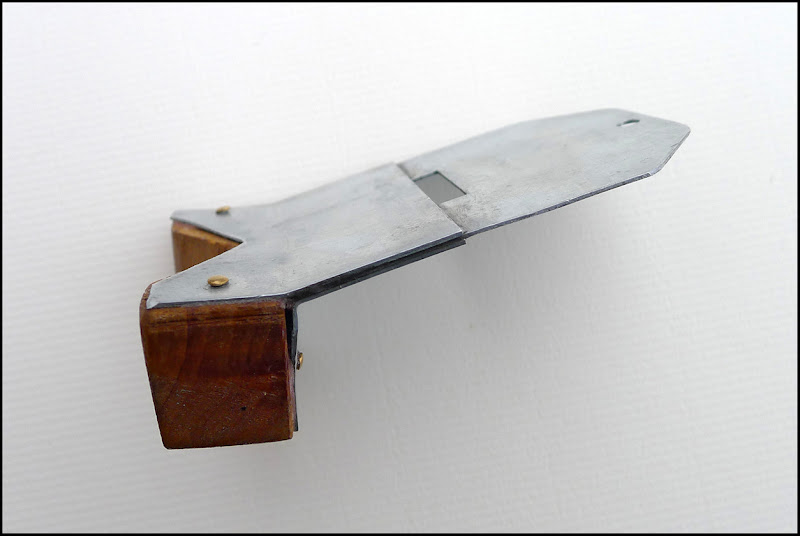 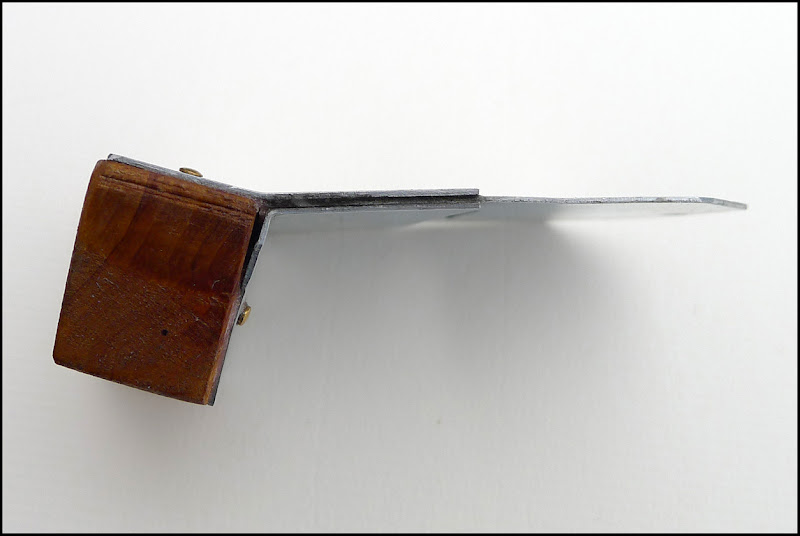 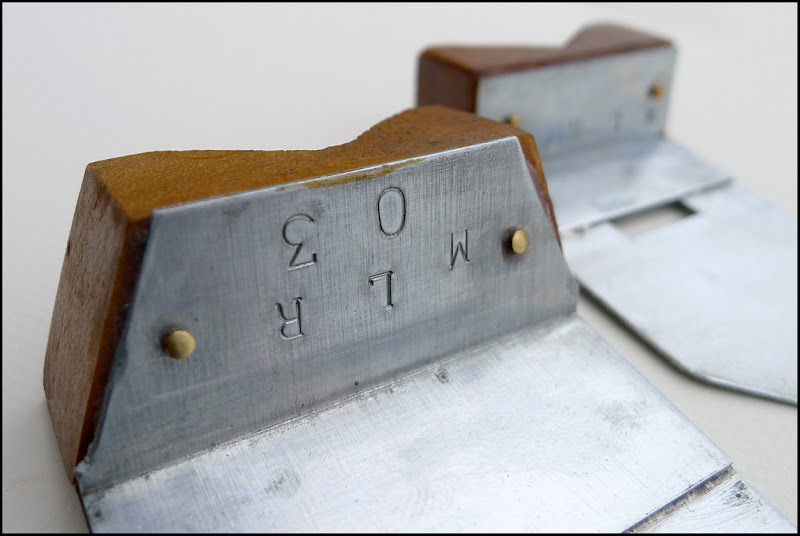 Mr. Mellier stopped making the Nasiphone...and told me he is out of stock now.
So, it has become a collector's object.
---
Publié par UkeHeidi à l'adresse 1:26 AM No comments:

Here is an excerpt of a documentary movie filmed in Berlin by Hajo Rubbert. Karl O. at the bandoneon, Bauchladen Berny at the nose flute and a third fellow at the barrel organ. Beautiful music, but unfortunately, the nose flute is difficult to hear, masked by the organ.

An interesting organization : the ACIMV

Founded in 1987, and thus ready to celebrate its 25 years of existence, the french Association des Collectionneurs d'instruments de musique à vent (ACIMV) is an non-profit organization which goal is to gather wind instruments collectors and enthusiasts, and to introduce « french instruments making and increasing knowledge on this subject ». But no chauvinism, since the organization is also interested in foreign instruments and collections...
His founder and president, Mr. Bruno Kampmann, told me that a third of the members are spread around the world, even as far as New Zealand.

The ACIMV has a blog with nice pictures of stunning instruments, and publishes a biannual paper bulletin called « Larigot » (from the name of an organ stop, coming itself from an old small flute name), plus an annual special catalog.

Checking the contents of Larigot past issues, I found four short articles dealing with nasal flutes :

- Larigot #27, Aug. 2001 : Le Vociphone : un gadget instrumental..., by Jacques Cools, which was the inaugural text dealing with nose flutes in Larigot and mainly exposed the belgian Vociphone (about which we'll post later).

- Larigot #29, Jul. 2002 : Les Flûtes nasales (suite), by Jeremy Montagu, trans. by B. Kampmann, which began to draw an inventory of modern nose flutes (with some tiny mistakes :) [Read a related article by J. Montagu published in English in FoRMHI bulletin (P. 7-9)]

With a very kind generosity, Mr. Kampmann authorized us to publish those whole pages, and provided the original files, with the color pictures. Thanks a lot to him, to the ACIMV, Larigot and the authors.

The most important one is probably the interpretation itself, i.e. the way a player appropriates the music he plays, incarnates it, in a coherent manner adapted to reveal its character and beauty. This is a matter of pure art, and we won't deal with it here and now.

The second important point is the beauty of the voice/sound itself, its purity and texture. In the case of the nose flute, this mostly depends on the instrument itself. But also on the voice ambitus (the range of accessible notes) and the breath length, which are really important in nosefluting. Master Mosurin seems to have infinitely deep lungs...

Another point we won't discuss here is the perfect pitch. This is as a matter of "ear" as a question of being accustomed to a specific nose flute, and being able to provide a real time perfect mouth/tongue move.

Finally, the ornaments. There are many kinds of ornaments in music playing, but the most adapted to nosefluting are the vibratos, tremolos and trills, which are often confused all together.

A Tremolo/tremolando (meaning tremble/trembling in italian) is an ornament in which the intensity (amplitude) of the note periodically varies around an average value.

A Vibrato (meaning vibrate in italian) is an ornament in which the sharpness (tonality) of the note periodically varies around an average value.

A Trill is an ornament in which the note rapidly alternates between to adjacent notes.

The classic and common plastic Humanatone provides a little airhole besides the mouth hole, that many people say themselves to be curious about. In the Humanatone patent (see here), Ernest Davis called it a "true tremolo" hole.

In fact, using this feature by alternatively closing and releasing the little hole, provides a kind of mix of a vibrato and a trill. Indeed, it is not a "true vibrato" since it provides an alternation between 2 notes (and not a variation "around" a note), and it is not neither a "true trill" since the gap between the 2 notes produced depends on the pitch of the original note : the gap is much bigger if the note is sharp (up to one tone), and almost not audible with a bass note. So, the gap is not controlled, and corresponds even less to a specific scale. Using this feature certainly provides a "trembling effect" though.

Now, what are the ways of producing tremolos, vibratos and trills with a nose flute ? There are 4 available means, more or less difficult to achieve :

Breath control is not easy. Being able to blow rapidly and alternatively strongly and weakly is difficult and needs a lot of practice. The Nosy Diva Miss Birdy Kuck is able to, as she masters the other following techniques... (so jealous I am!) Just check her crazy Valkyrie cover, or her Queen of the Night ... Well, breath control provides a "true tremolo".
Contrarywise, it's rather easy to alternatively blow-and-stop (air/no-air), thus provoking a hashed and discontinuous note.

Moving the flute is much easier. It needs some practice in order to get a rather smooth and regular action. It consists in pressing and releasing quickly and alternatively on the base of the flute. This technique provides a "true vibrato".
You can check a well performed sample of that finger technique in this video.

Moving the mouth : with this technique, the player alternatively pulls forward and backward his chin, pushing by that way the base of flute, and provoking the same effect than with "moving the flute", but by another physical mean.

Moving the tongue : the tongue can be moved according to several actions. Back and forth, or left-right-left... or up-down-up... applying different types of trembling effects. The 2 last moves (L/R and U/D) are really easy to perform widely, and provide a kind of "bird call" vibrato, with a huge gap between the bass and sharp notes. It's more difficult to avoid this large range, and to master a tiny and subtle vibrato.

Well, there is a subsidiary way, which is to alternately block and release the mouth hole with a finger, partly or entirely, but it provides no tremolo or vibrato, but a discontinuous note (pretty efficient for Morse code ?).

Trills ? They are produced with a typical tongue move (some kind of inflating it...) coupled with a soft breath control ... Impossible for me to describe precisely, since I do not master this technique. We need the Nosy Diva to reveal her secrets...
Publié par UkeHeidi à l'adresse 12:26 PM 1 comment:

Email ThisBlogThis!Share to TwitterShare to FacebookShare to Pinterest
Libellés : technicals, vibrato and tremolo

Japan is a paradisiac country, where you can find Humanatone vending machines ! In case of an urgent need to whistle, just drop ¥300 (a bit less that $4) and soothe your will to play, whenever your urge springs up. 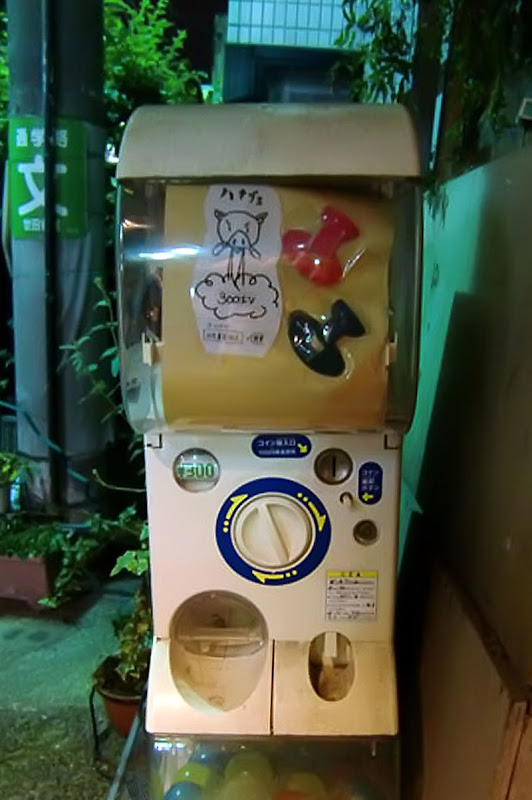 Here is a spanish patent (ES1004918), filed on Mar. 7 under the title "Flauta Nasal", 1988 and registered on Oct. 10 of the same year, by Uriarte Urbina and Antonia Maria, inventors, for the account of Papelaria Informal S.A., Donostia-San Sebastián, Guipúzcoa, in the autonomous community of the Basque Country.

No specific technical innovation in this nose flute, but a neat and efficient design though, with two huge lateral walls, sized largely over what's necessary. Why ? To help a better grip maybe ? Or more probably in the design gesture, making the profile of the flute looking like an elephant head. 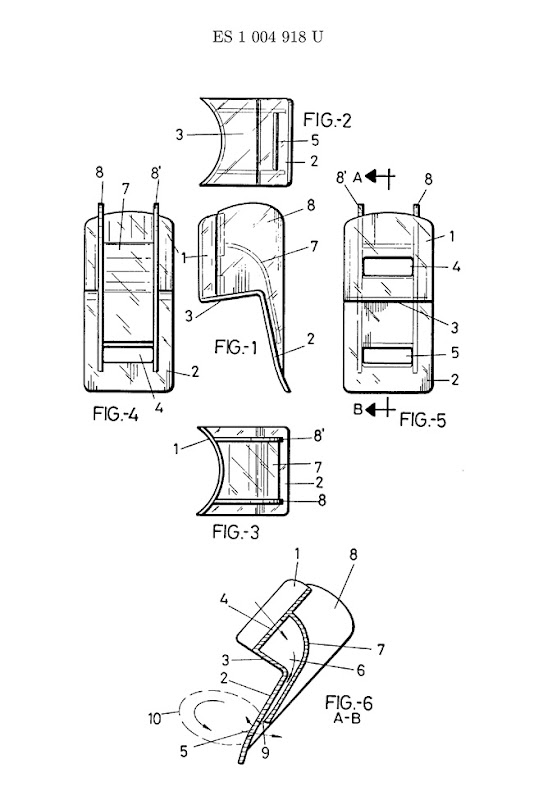 The Flauta Nasal is planned to be made in one piece, in cast plastics or composite material, but might be recovered by another material :