I just had the opportunity to buy some vintage "Swan logo" Weidlich & Lohse Nasenflöten, all the same color, never used ("New old stock"). The seller told me he found a bag full of them, in an old german warehouse that closed in the early 1980s. Compared to the other stuff left in the store, they should date, according to the seller from 1965-1975. My opinion is that they were probably produced between 1960-1970... 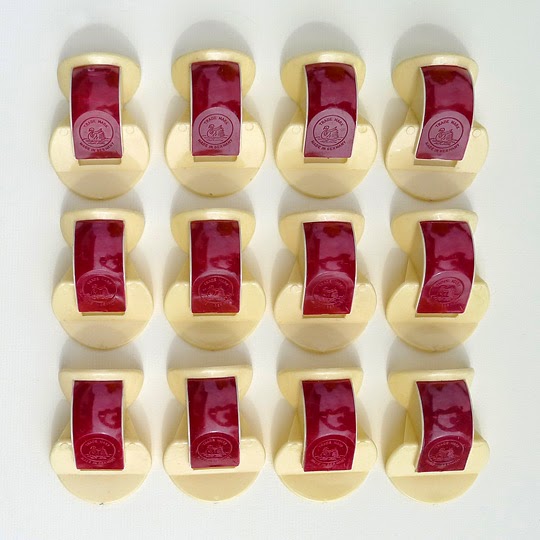 Don't they look like fresh Beetles waiting in front of the Volkswagen plant?

On a objective point of view, there should be no difference between a vintage and a modern Schwan nose flute: both are made of plastics and from the very same mould. So what? Do plastic nose flutes age and mature like wine or ukuleles? No. But if you take the time to look closer, there is a bunch of differences between "genuine" Weidlich & Lohse swan flutes and the current chinese production.

We previously had some discussions on this very topic on this blog, but I made some mistakes in the former posts. So it's time to make a new scan of our knowledge [please check here and here the former analysis]

Notably regarding the mould for chinese production, that I thought to be a copy of the genuine one: in fact, it's the german mould that is used in China. There are some tiny artefacts that were present originally on the W&L nose flute that still appear on the chinese one. For instance, these two tiny dents that were unintentional in the typo: 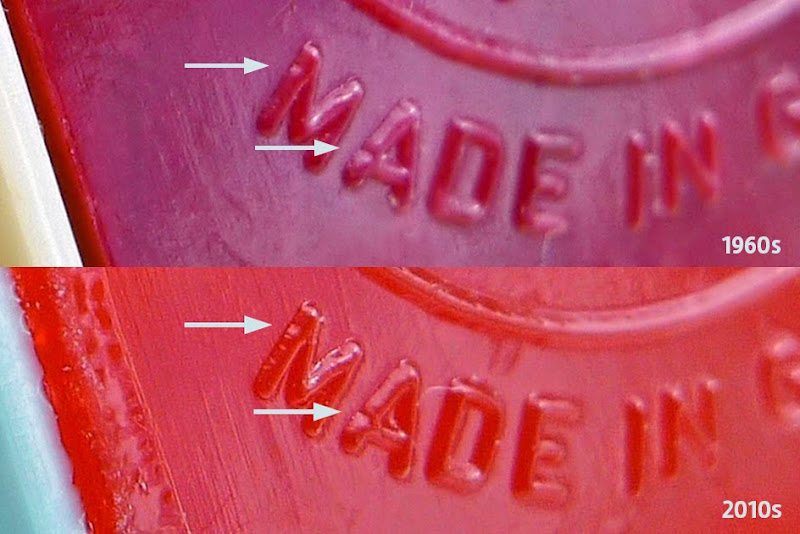 I used to think there were 3 different periods in the Schwan production, with an intermediate one between the original flutes and the chinese production. This is my first amendment: the were (at least) five! W & L closed their factory and (supposedly) left Göttingen at the end of 1959, probably in order to occupy a bigger manufacture (until then, they were based in a small workshop). But... I don't know if there were quality differences between the nose flutes produced in Golden age I and II: maybe the delocalisation didn't impact the production (same machines and moulds, same plastics...).

Also, I found there were 2 intermediate periods.


Catching at a glance the differences between a early production vintage Schwan and a modern chinese one is easy: the plastics and the quality of finitions have nothing to compare!

Now, the question is a bit more subtle to differenciate (and thus dating) a Nasenflöte from the intermediate periods. Let's scan the points of comparison. 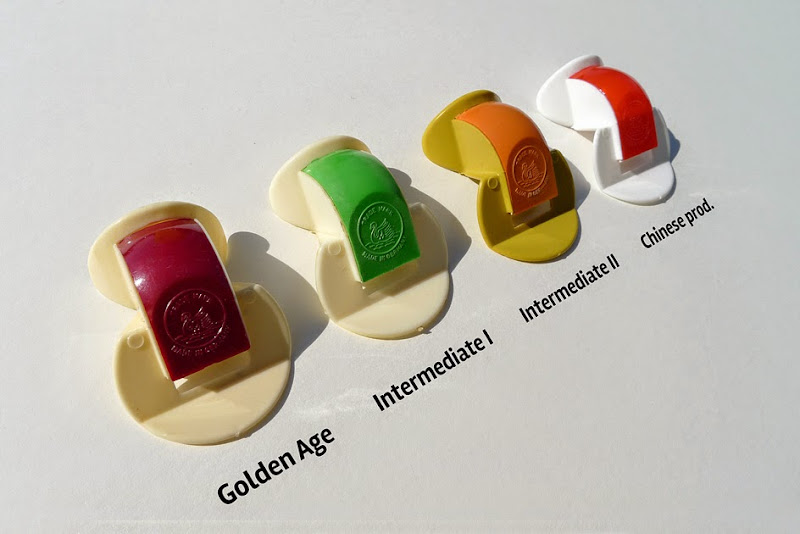 1 - Plastics
The plastic used for the german production was polystyrene (which is a good quality of material for sounding instruments). But there are several quality of PS(polystyrene), with different characteristic (sounding and resonance, weight, shrinking rate while cooling, ...), and the "intermediate periods" notably correspond to a change of PS type. If you could hold the different Schwan in your hands, it becomes obvious that the plastics are not the same. The Chinese production do not use PS at all, but probably Polypropylene (PP)or Polyethylene (PE).

Here is the weights measured on each model (again, I have only one type of "Golden age" flute, that I suppose to be GA II, without being 100% sure):


So, all of them weigh rather the same, with a slight difference for intermediate II. 0.3g (4% discrepancy) may look very few to ascertain a difference between InterI and InterII, but other points allow us to distinguish periods I and II, as we will see.

Here is the thickness measurements made with a Palmer at the same point of the flutes. This test helps to evaluate the plastic shrinkage (remember those flute were injected in the same mould) and thus, to determine if the plastic used is the same or not.


On the thickness test gives more visibility to discriminate between plastics. This time, the difference between InterI and InterII is huge: 33%! The same plastic injected in the same mould with the same process can't provide such a difference (Ask Mr. Schuermans!). This is the proof there really were (at least) two intermediate periods.

The ratio Weight/Thickness (kind of density test with no unit) increase the difference even more:


(With these figures, the InterII and the Chinese schwan look very similar, but are totally different on their visual aspect)

To differenciate the nose flute plastics, I like to use a sound test. It is very unscientific, but I think it tells a lot to any of us, because we have in mind the associations between sound and plastic quality. Here are samples, made at the same conditions: letting a nose flute falling on my desk from 10cm:

2 - Labium
Checking a Schwan labium is the easiest way (at a glance!) to determine which period the flute dates from, in association with a check of the "nose shield stigmata" (see next point).
Indeed, that the origin, the labium was obviously designed as a regular sharp angle, with an edge parallel to the line the mouth shield line. The mould, fresh and new in 1955 (and the good quality polystyrene injected there), was able to produce such sharp angle, with a clean result. But with the time and the millions of schwan nose flutes, the state of the mould deteriorated (I suppose the part that makes the labium is a moving part...) and the labia produced became more and more irregular. The edge of the labium lost more and more its parallelism to the shield line.
The degradation phenomenon is already visible at the Intermediate periods: a bit crappy but still parallel for InterI, crappy and with an angle at InterII, then really crappy and very unparallel and even not rectilinear in the Chinese production. 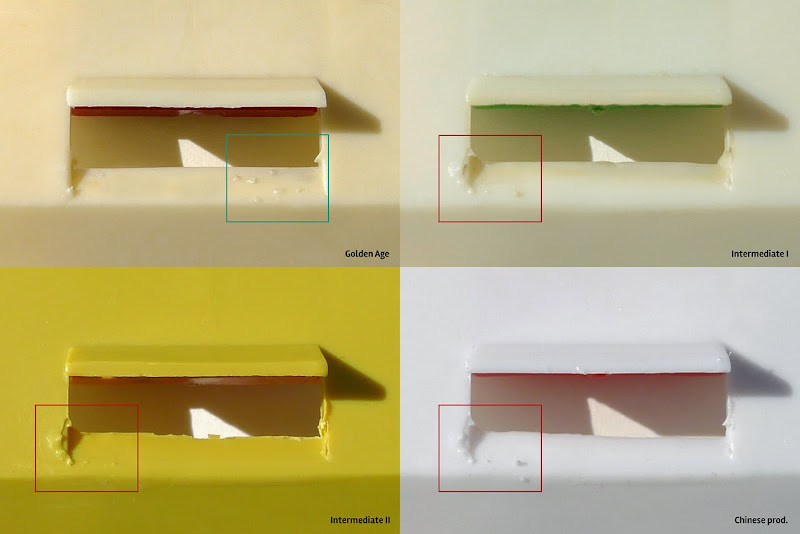 One point is interesting: the labium production small "stigmata" are *exactly* the same from intermediate periods until Chinese production. Same shape, and same 2 tiny pimples. But the Golden age flute, yet not exempt of this kind of stigmata, shows a totally different arrangement, with a group of pimples on the right side. I have no explanation. Such a constant distribution of pimples after the initial production is the sign of an artefact that didn't appear at random. Was it due to a change of production method?


3 - Nose shield
A second point can easily be looked over to help dating (in coordination with the labium check): the nose shield stigmata.
The inside of the Golden Age nose shield is perfect and clean of any stimata. Intermediate I too, but the top edge of the air entrance are not smooth anymore. Intermediate II has a very recognizable artefact: a tiny circular depression (corresponding to the location of a mould air-hole in the inside of the flute). InterII air hole is coarse edged too. And finally, the chinese nose shield is *systematically* torn by a tear-shape hole where the airway cover joins the nose shield (+coarse edges air hole)


4 - Venting points
I call them venting points, but I'm not sure they are; I talk of the 4mm diameter round shapes appearing twice in front of the Schwan, plus one hidden by the air cover. The air cover shows one too.


The concept of venting is simple: provide many pathways to allow trapped air and volatile gases to escape from the mold quickly and cleanly. The pathways should lead directly from the edge of the cavity image of the mold, or through ejector and/or core pin clearance holes, to the outside atmosphere surrounding the mold. These pathways need to be deep enough to let air and gases out easily, but not deep enough to allow the molten plastic to escape through them. http://www.plastictroubleshooter.com
As we can see in the picture below, the Golden Age schwan may have salient or concave venting points. On any Intermediate periods Schwan I know (including the Piet Visser's ones), the points are salient. And the chinese factory produce almost flat points, sometimes slightly convex, sometimes slightly depressed.

5 - Edges
As for the labium, the edges seem to get coarser and coarser with the time. The Golden Age ones are smooth and clean, and immediately from the first intermediate period, they become rough. The chinese ones look even worse because of the glue in excess that overflow the plastic and even make bubbles.

It is now possible to draw a Dating chart for the Schwan: 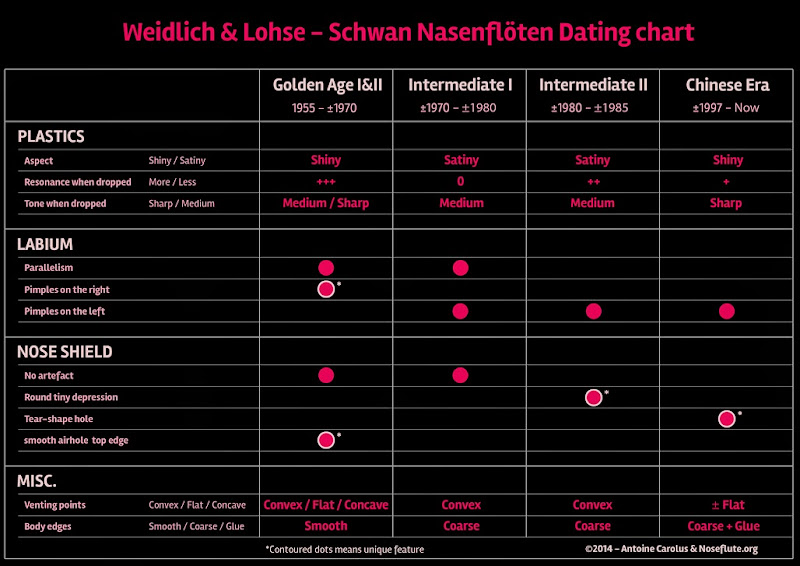