To enter the new season, here is a Haiku written by Maikel Mei:

« Autumn Leaves is a very famous jazz standard, most notably linked to one of my heroes, Chet Baker, who with his distinguished soft tone in trumpet & vocal actually was quite popular in Japan. Autumn leaves obviously represent the colouring on the trees, preferably in one of those wonderful Japanese gardens, but also means that winter is around the corner, as the beauty of autumn makes place and gives way... 'Autumn leaves' also literally means 'Autumn goes away'. ('leaves' is then used as a verb, 'to leave'). When Autumn has gone, winter comes. Winter symbolises the end of life itself, the last stage of someone's life. The nose flute is traditionally played at life's end, at funerals and wakes. However, the nose flute is also played during courting and wedding ceremonies. Nose flute play therefore covers and marks all important stages of life. After Winter there will be a new beginning: there will be another Spring. This haiku contains the traditional number of phonetic sounds (morae), not words or syllables. To me, the used phonetic sounds of the words sound in keeping with the atmosphere of Autumn and the last quiet, beautiful day before the weather turns really nasty. The haiku can be read in many ways as each line can be combined in whichever order. It was intended to be as sparse yet as meaningful as possible at the same time. It depends on the reader what to see in it.

« Blowing not only means the wind blowing and the brass or wind instrument being played, but also messing something up, giving something away, which autumn does in a quiet way, such kitchen sink drama!!! The leaves are being blown off the trees and the song is being blown on the horn and in this case the nose flute; it could also imply that the wind/sound coming from the wind instrument makes the leaves fall off the tree...! Another meaning: the wind goes right through the nose flute, making wind tones, the very earliest of wind instruments, often hung in trees(!); this is regarded as the 'voice of the spirits'.... The leaves possibly cover the nose flute as they fall on the ground, and methaphorically, it means that the season has come to an end, being put away, stored, 'the party's over'. Also, the song on the noseflute marks the end..., as in my poem 'Last goodbye'. Actually, it ends in exactly these 4 words. 'On the  nose flute also means that it is written on the nose flute as a tribute on the noseflute and written to be played on the nose flute as well.... DEEEEEEEP;-) »
Publié par UkeHeidi à l'adresse 8:12 AM No comments:

While waiting for their iPhone 5...

... they are playing the nose flute! 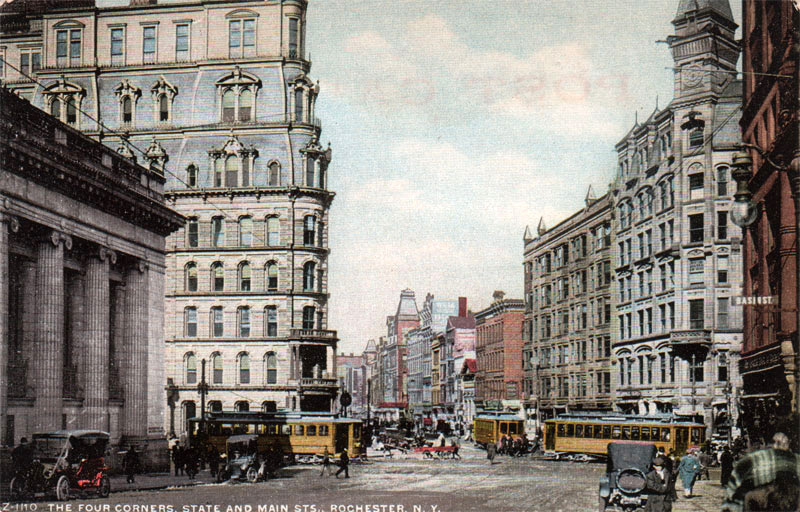 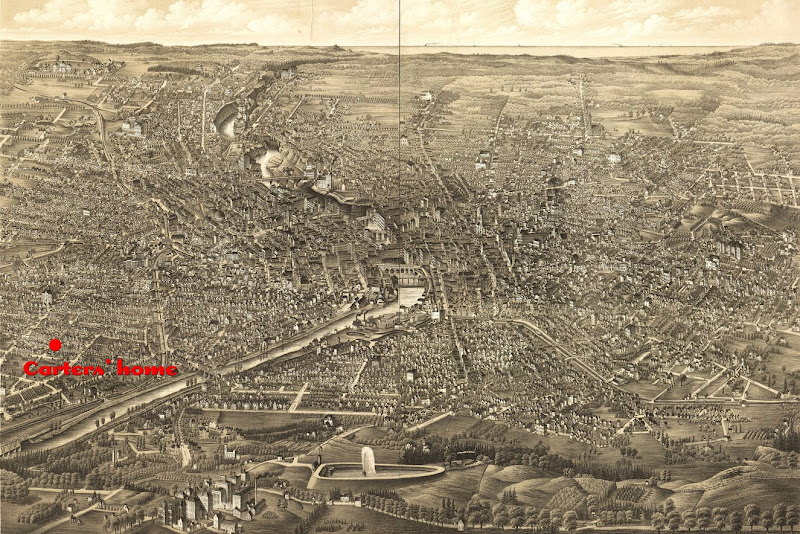 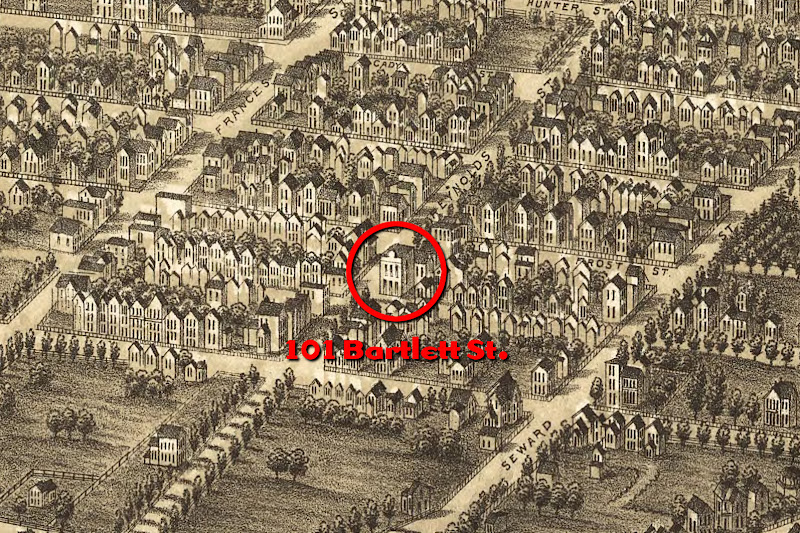 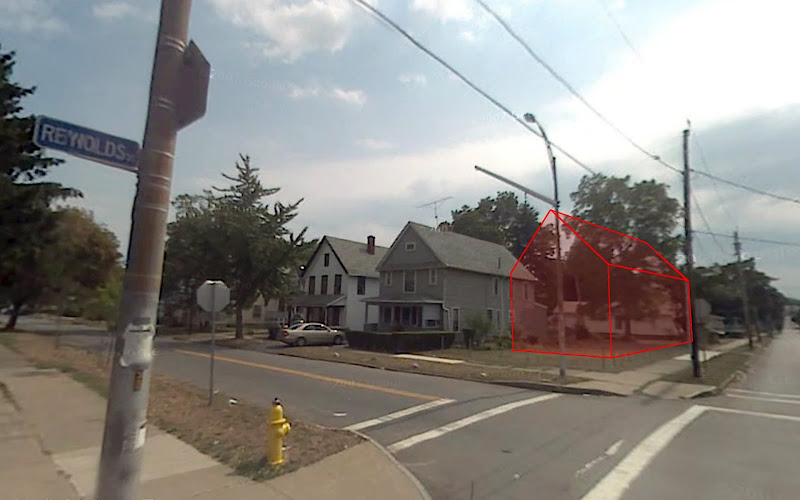 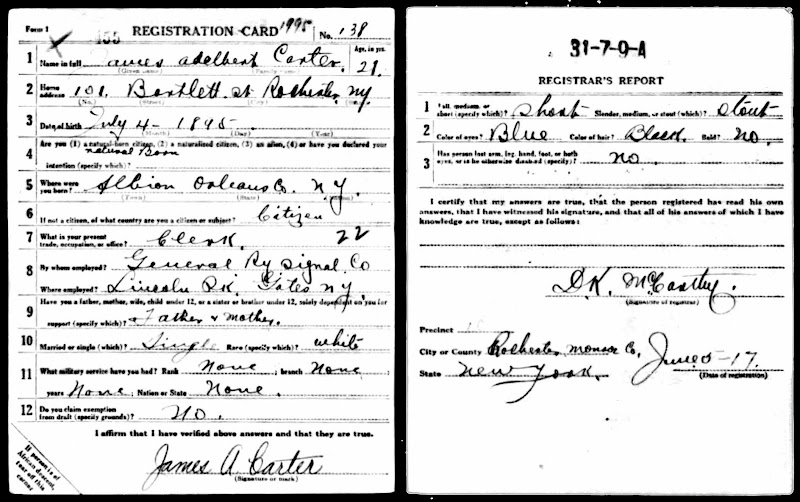 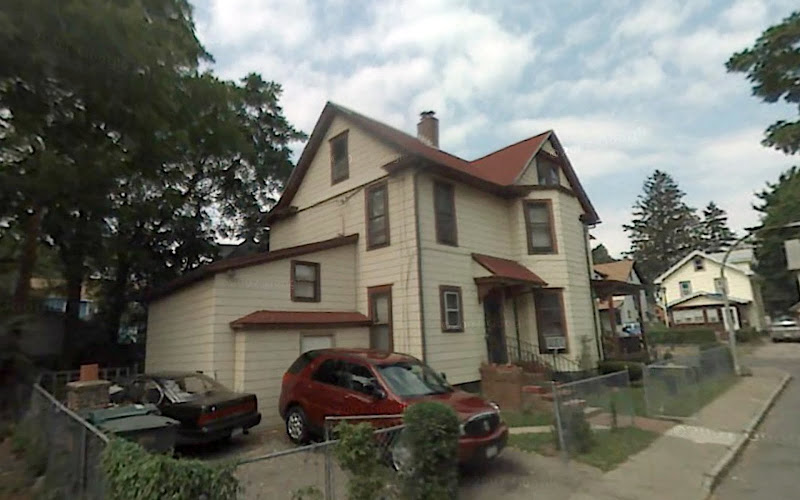 The NHK (Nihon Hanabue Kyokai), nose flute fellowship of the Hanshin, is very active. Many meetings, rehearsals and public performances. And this morning, it appeared on Yomiuri TV, for a presentation.
Unfortunately the emcee doesn't manifestly know how to play a nose flute, and tries to blow her Bocarina like a whistle :) Then the NHK plays a sweet melody!
Thanks to Mr. Hisaaki Matsui for sharing this video.

Our friend Hanabue114 on stage for a public performance, in Iwaki (Fukushima Prefecture). Well, much less disco than when he plays in his home! :)

With his new money, Carter, on his mid fourties, probably felt he was ready to get married, and in 1895, William G. Carter wedded Elizabeth M. O'Brien.

That is also in 1895 (4th of July), that William and Elizabeth have a son : James Adelbert [this mean the child was conceived before marriage :) ]

The 1900 census sheet is interesting, because we learn that the Carters live in Main street. Albion Main street is - as it indicated by its name - the biggest and longest street of the town. However, 2 families before having made the survey at the Carters, the enquirer was in Liberty Street, and 5 families later, he is in Orchard street.
This helps to locate the Carters' home at the very North end of Main street, near the Erie Canal.

The following map dates of 1880, and in 1900, almost any building of this very part of Main street has been skimmed over and rebuilt in the 1880s. However, the environment stayed the same : 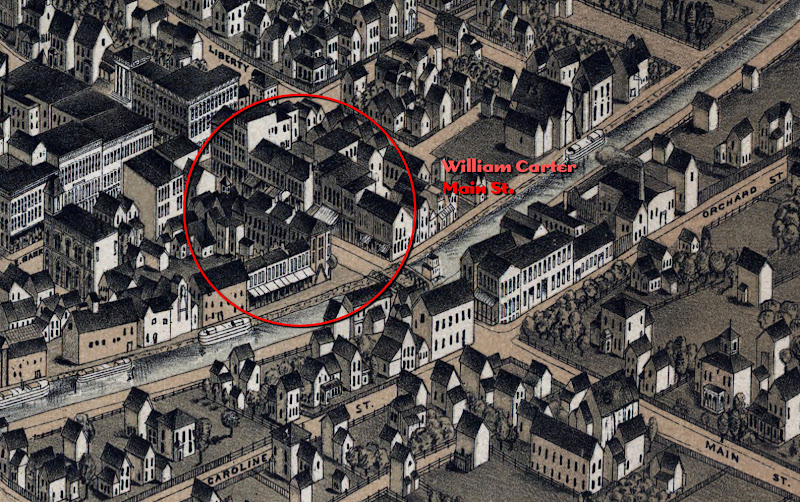 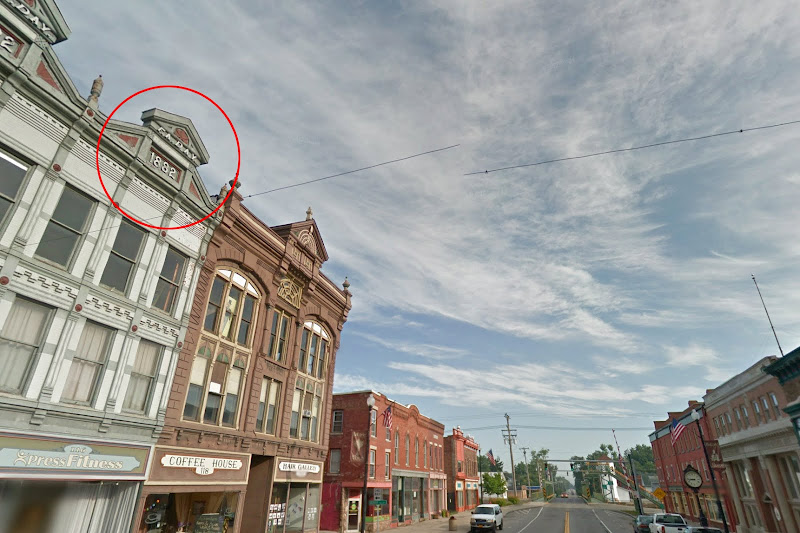 In 1905, the census sheet notes that William Carter is Tinsmith (at home) and in the type of activity box, adds (o.a.). I suppose it means "own activity". So, Carter works on his own and at his home. He has no shop, and I assume he is a kind of subcontractor of one or several shops/craftsmen in Albion.
Also, the census shows that Elizabeth is also milliner at home, but in the activity box, we can read Emp., meaning that Mrs Carter works for a clothing shop.

1908 is a very informative year for us. Indeed, the only Albion City directory available in the archives dates of that year, and it is also more or less the year that several postcards of Albion were published.

What is bizarre in the directory, is that William doesn't appear anywhere. Contrarywise, Elizabeth is listed twice in the regular list, as a milliner, but also through the advertisment she published! She is associated with Mrs. Julia Kirby, and their shop is located at the 1st floor of the 55 Main Street. 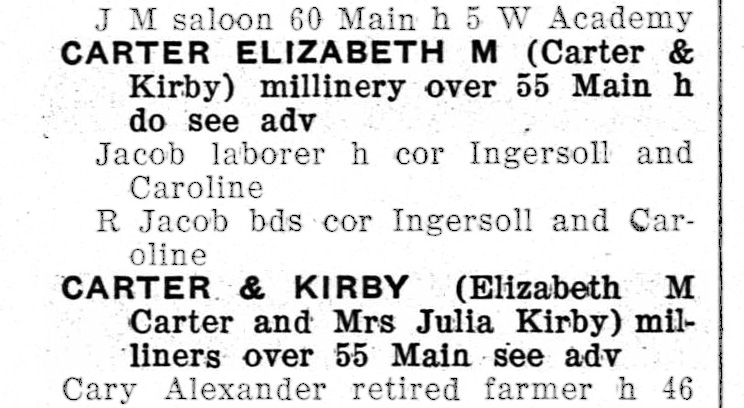 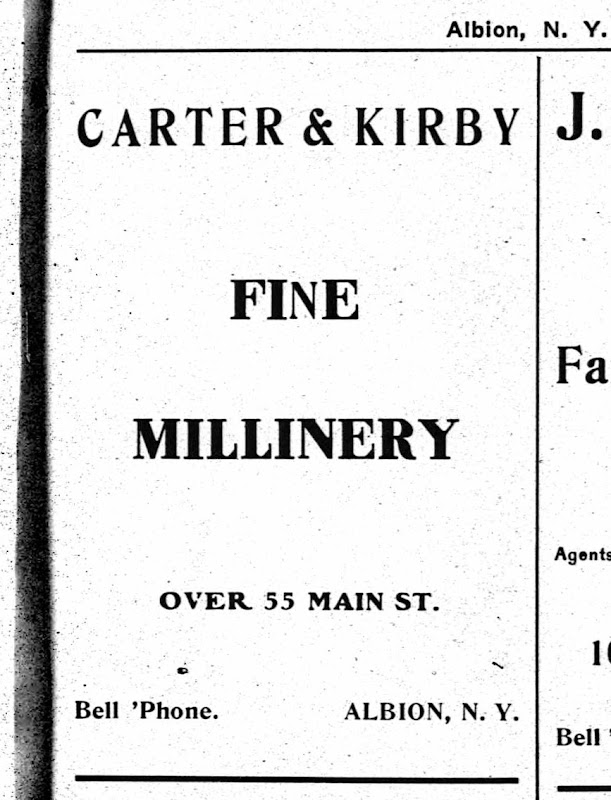 Elizabeth appears a fourth time in the directory, as 1st Vice-President of the St Joseph lodge. St Joseph is the cathotlic parish and is lead by the Rev. Francis Sullivan. On the postcard below, we even can see the Rev. Sullivan on the flight of steps of his parsonage, and the building on the left is (probably) the school of the Carter's children. 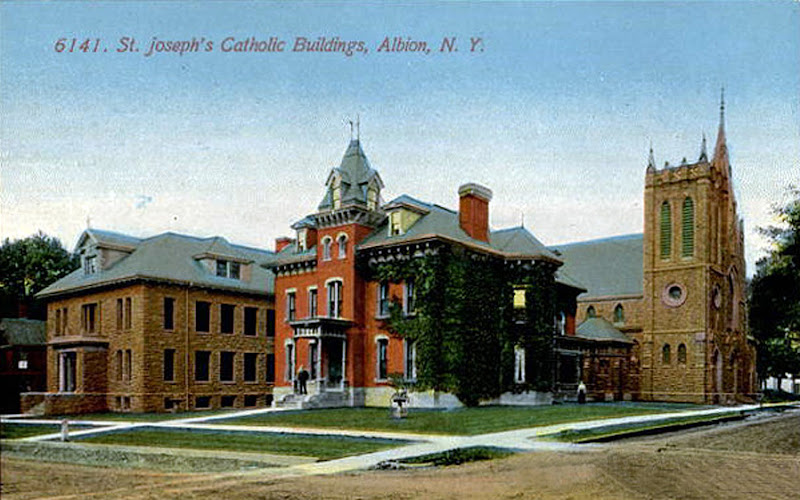 It is not immediately possible to locate the 55 main street on a current Albion map, since the street numbers have totally changed since. But I checked any line of the directory (!) and crossing it with the Street directory page, a "souvenir book" dating of 1905 and some postcards, I have been able to draw this 1908 map, with the shops and their owner/tenant. 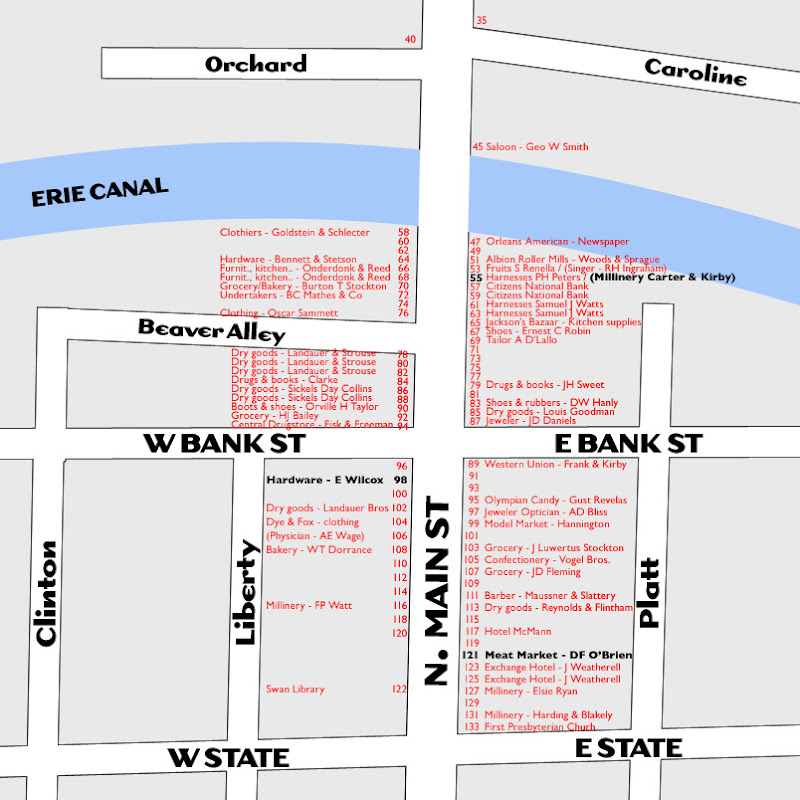 So, the Carter living and working at the 55 (the ground level being occupied by Peter H. Peters, a harness maker), it became possible to show you their place. The first floor probably for Elizabeth's millinery shop (with the 2 white shades), and the second for William's workshop and Carter's home (currently the #125). 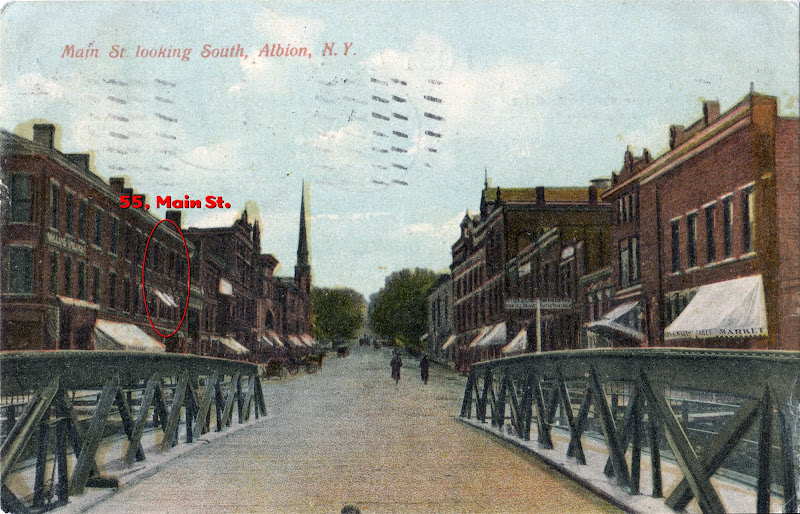 In the City Directory, we also learn that Daniel O'Brien's (Elizabeth's brother) shop, the Meat Market, is located 121 Main St., that is, exactly next to the Hotel McMann (probably the one where William was living when bachelor, and invented the Nasalette). 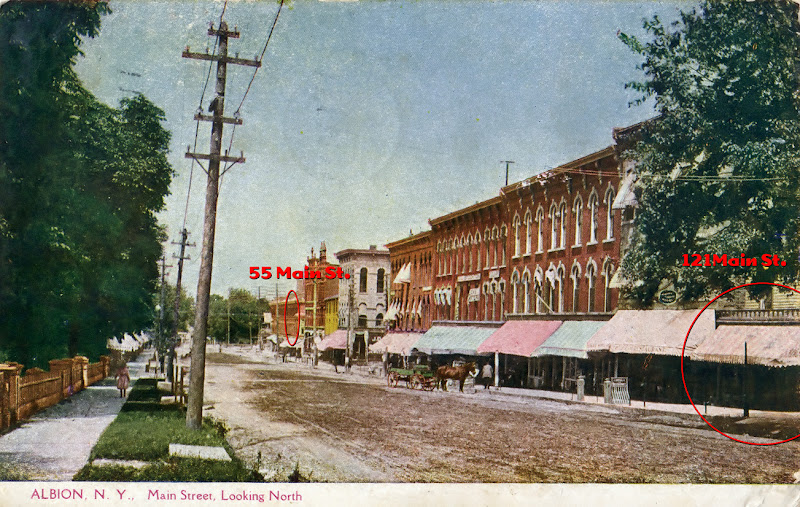 The Hotel McMann, now The Gurney's Olde Coach Inn, in which the Nose Flute may have been invented (just besides the small Meat Market of Carter's future brother-in-law): 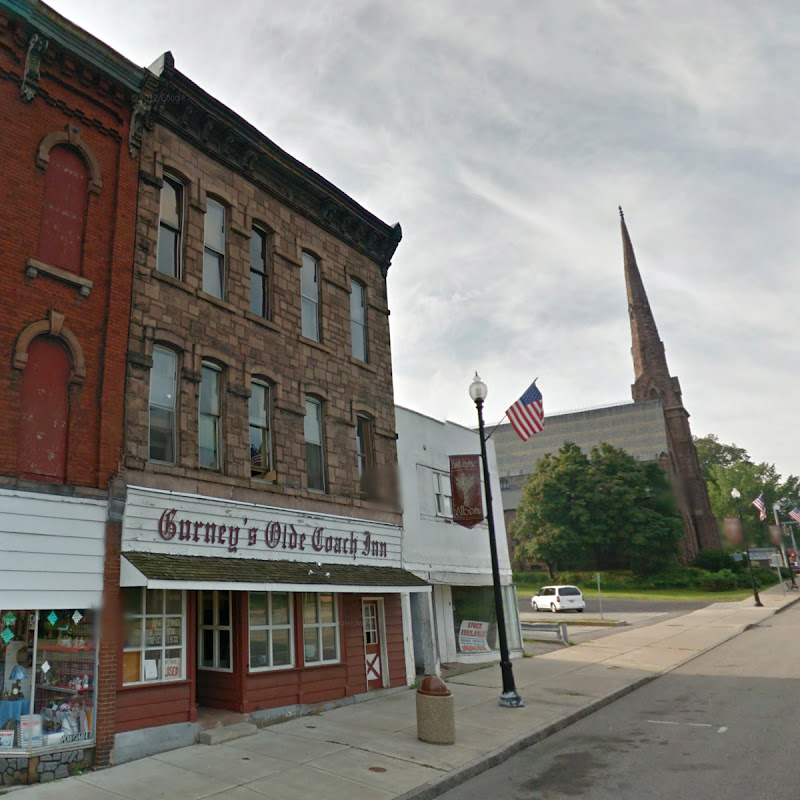 Another interesting fact (for obsessed people like me) is this one : On an early picture, not dated but probably around 1900 or maybe earlier), we can see the shop located at 98 Main St. This shop is hold by Mr Eugene W. Wilcox, and is a hardware store. 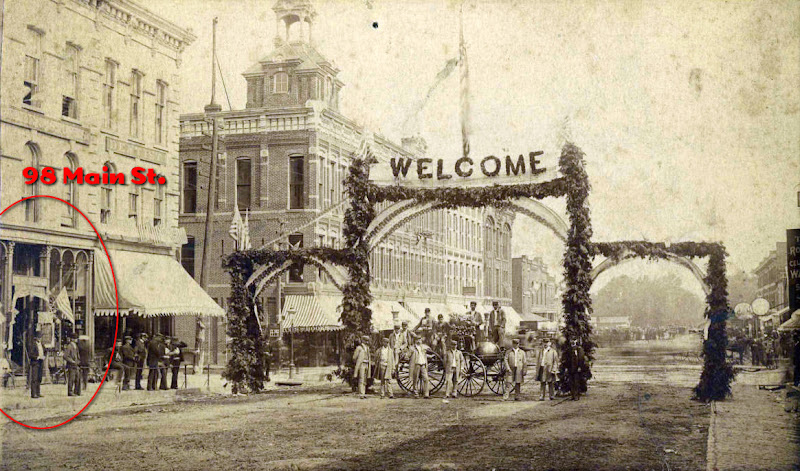 Mr. Wilcox is an eminent member of the Executive Comittee of the Albion Chamber of Commerce, and is not all a tinsmith or a craftsman. He is a merchant. Here in 1905 : 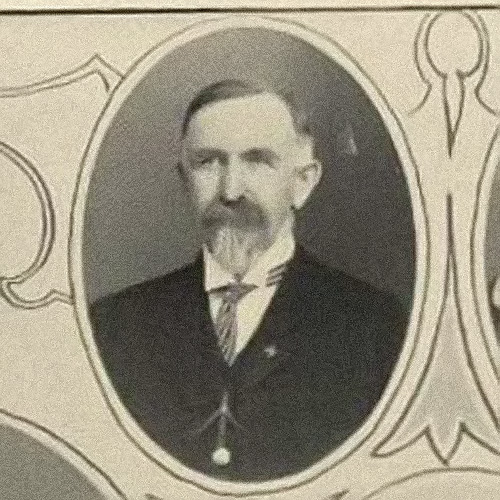 Now, in 1907-08, the front of the shop has changed. E.W. Wilcox is still the owner, but an extra sign has been added. With just a little effort, we can read "TINSMITH" on it. 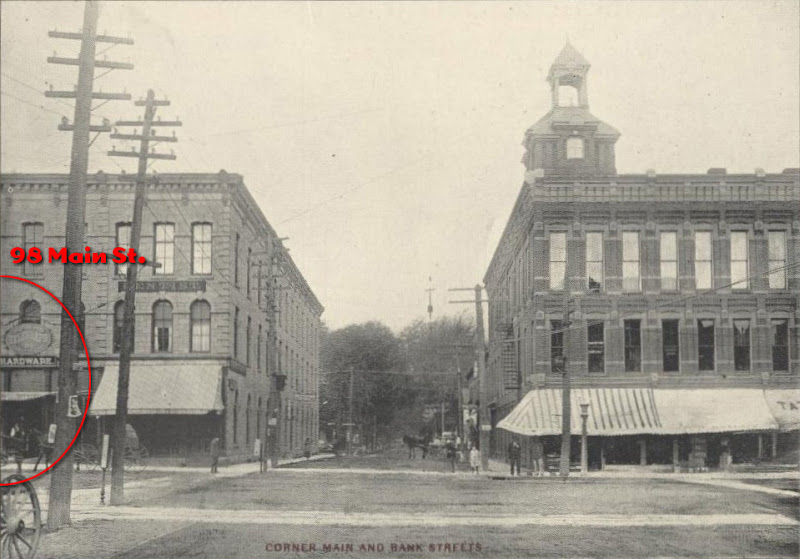 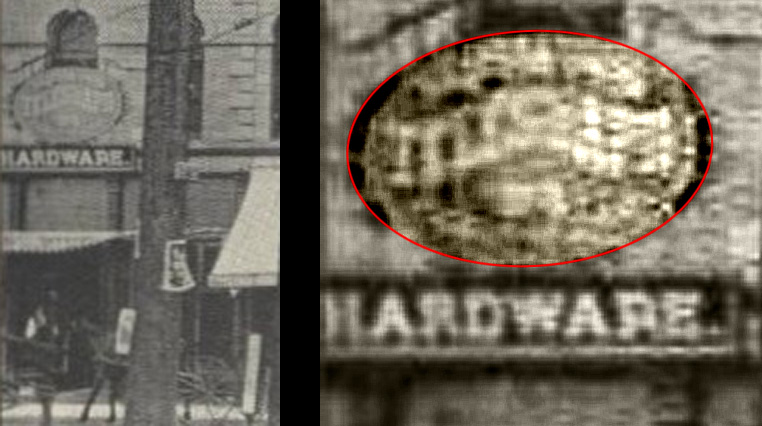 So, in 1908, Wilcox is able to accept orders of tincraft. And being not himself a tinsmith, he certainly had to subcontract the business... You see my point?

The shop still exists, and is still a hardware shop: 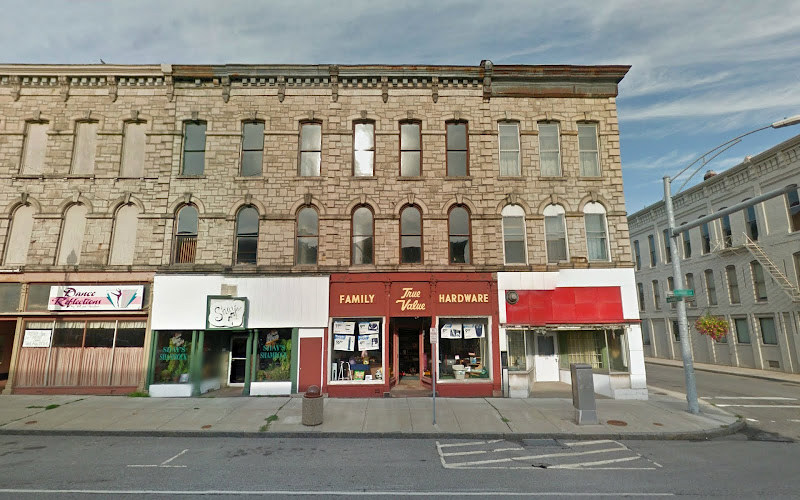 In 1909, the Carters moved to Rochester.