Kiyoshi Suzuki (スズキ キヨシ) is a Japanese musician, specialized in African percussions, an instrument maker, a music teacher and lecturer, and a performance organizer. His wife Sachie Tomioka (トミオカ サチエ) is a designer and an aromatherapy instructor. Both are very involved in environmental and human causes, and form the Kiyoshism studio, or On-lak Ichiba ("music market").

On their website (and here translated by Goggle), you can read all about their activities, and discover the instruments Suzuki makes and sells : percussions, Kalimbas, "shala-shalas" and... nose flutes.

The particularity of Kiyoshi's instruments is that they all use a funny, colored and recycled supplementary percussion system : flattened beer caps used as little cymbals! Even the On-lak nose flutes (おんらく) wear their little beer cap, coming from a Japanese, Indonesian, Hawaiian, Indonesian... beer bottle. 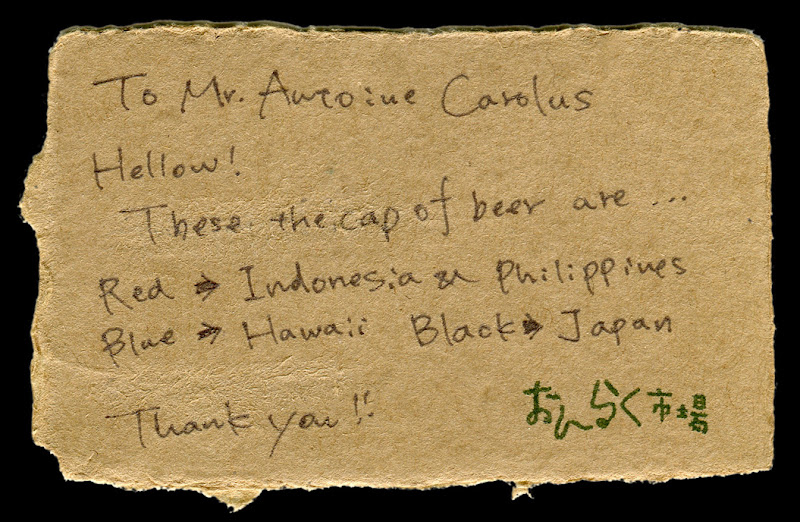 
- When did you begin to make nose flutes, and why ?
I began to make them about 5 years ago.
I think ... the nose flutes is "a barrier-free musical instrument". It is a communication tool, so funny and so amazing !


- How did you get the idea of adding beer caps, and why ?
The cause of that is the sound object "Okan Shala-shala." ”Okan Shala-shala” is a Kiyoshi's original item. The Japanese meaning of "Okan" is beer caps. It's a like a tambourine, and makes a sound of good noise.


- What is the meaning of the name "On-Lak" ?
We are a husband and wife unit. Kiyoshi is a musician (Percussion & Kalimba player). Tommy is a designer.
Our unit name is "On-Lak Ichiba".

The Japanese' meaning of "On-Lak" is "music".

"On" meaning is  sound.
"Lak"means "enjoy, comfortable, etc."
The Japanese meaning of "Ichiba" is "market (PARCO)".
We enjoy music !!! 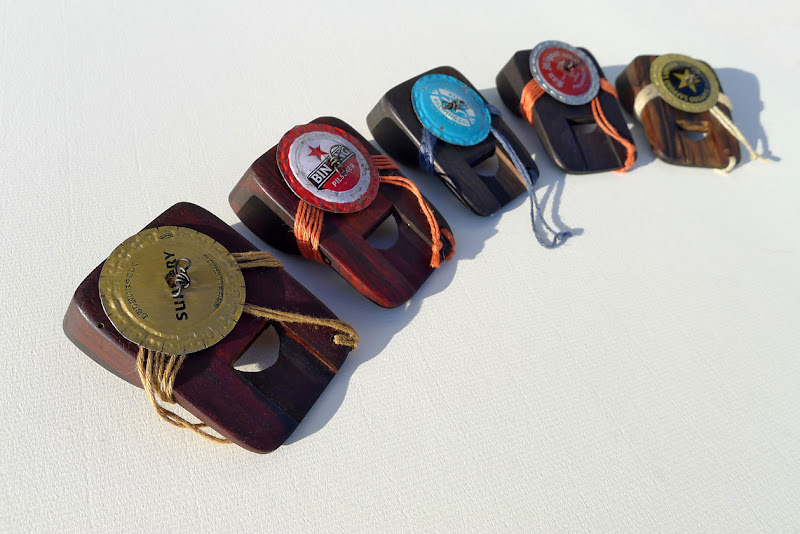 The On-lak nose flute
I tried to find to get one by the past, but did not succeed because the one I looked for was on Amazon.co.jp, and without a Japanese postal address, it is not possible to order from this seller. But recently, I had the luck to become friend with ShowNoseFlute, this young, fine and gentle hanabue player, and we decided to make a exchange of nose flute, since he was interested by some western ones.

So, thanks to Show, I received my first On-lak. And as a greedy collector, looking for info about it, I finally discovered the original On-lak website, and was able to... order more! (very easily, sending a english email with my colour choices at info[at]kiyoshism.com, and paying with Paypal). 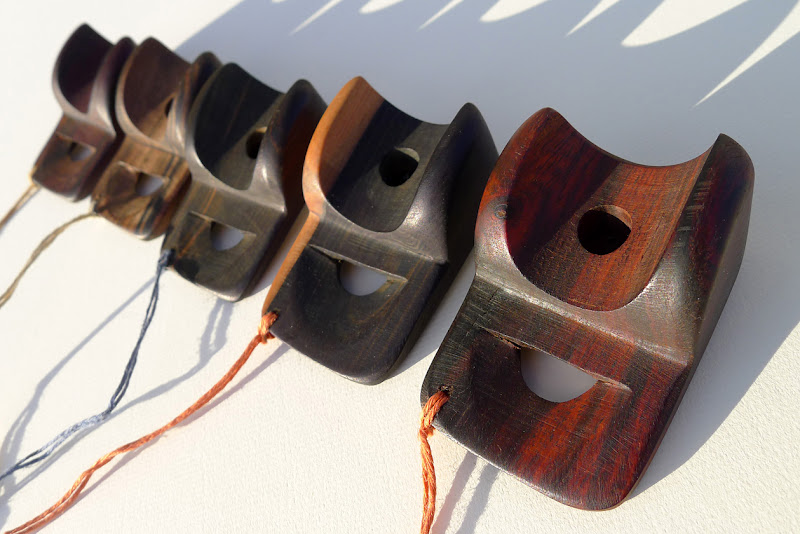 The On-lak is a vietnamese type nose flute, as we know them, made in quite good grade rosewood (some show the very recognizable light-dark patterns), and, as we already know, are very playable with a nice sound (some difficulties, though, for noses with hard cartilage coming low under the base of the nose, because of the position of the air entrance on the flute). 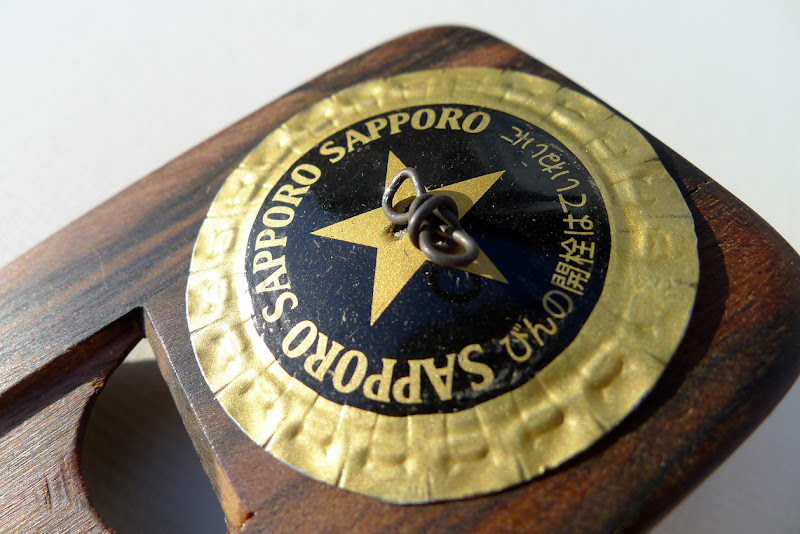 But the On-lak is a very funny instrument with its "Okan" soft percussion cymbal. How to play it ? Well, there is a user-manual that is provided with the flute, which says (thanks to Show for the translation) :

« Sandwich the nose flute between thumb and middle finger, and put the index finger on the crown cymbals. Fit nose on dent of the top (see photo). » 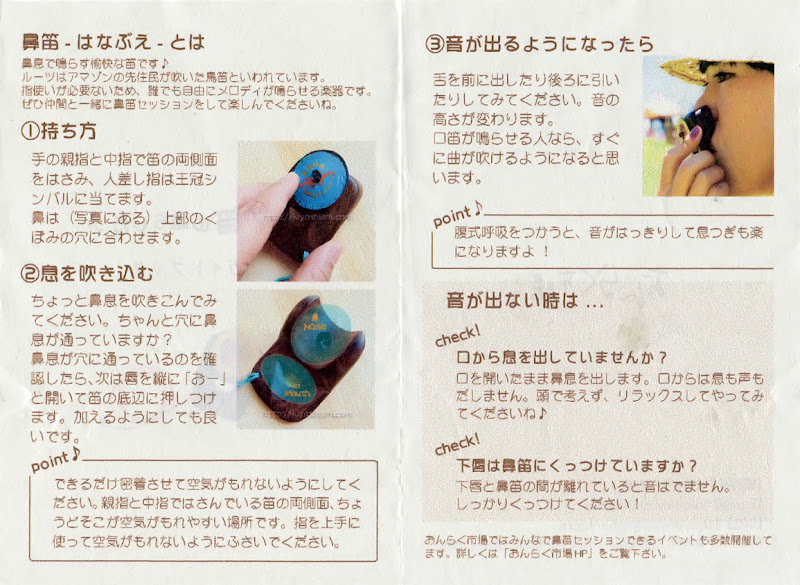 So, the right use is to shake and tap cymbal, according to your skill and imagination, with the index, while you blow the flute. Or you can use it as a flute only, and then use it as a shaker. Let's say the percussive sound is not very loud, as you can expect from a single beer cap smashing a small piece of wood, but for a solitary playing or before a microphone, the okan will do the thing!

You can hear the okan effect in this recording by ShowNoseFlute, in which he uses different nose flutes : the percussion sounds come from his On-lak flute.

And I made a little stupid and quick video for you (and you already know that I'm not a good player...) :


So, if you look for a funny and original nose flute, just choose the colour you like for the cymbal and for the cord, and ask Mr. Kiyoshi!

Orders at info[at]kiyoshism.com (replace [at] by @, for sure)

The On-lak Ichiba Youtube channel (many kalimba and performance videos)

Here is a recent video showing the Helgoländer Schule Lehrer Band (at the Schulzentrum Helgolander Straße, in Bremen, DE) with a quite nicely played nose flute bluesy solo. The song is Ain't No Sunshine, by Bill Withers (1971), and the nose flute appears at 1'46".

Secret Archives of the Vatican is a British « transglobal breakbeat dub science music » band. Many of their pieces use sound collages, and the titles often are a joke or word game related to references.

In their album Reformation, there is a piece played with a bağlama (turkish lute) and a nose flute. It is a very short and light piece (21s) called « Careful with that noseflute, Louis », which obviously references the famous and psychedelic « Careful with that axe, Eugene », by the Pink Floyd (Ummagumma album).

In the bağlama part, I can recognize the very hypnotic « Ötme Bülbül » ("Don't sing, Nightingale"), a classic Açik song.

On his official webpage, he is presented like this : « Charly “the city mouse” Fasano is a poet and story-teller from Denver, Colorado. He has performed and opened up for bands like Lucero, Drag the River, The Queers, Crime in Stereo, Mark Mallman, Tim Barry, Cory Branan and more. He is the co-founder of cassette tape and book label – Fast Geek Press/Analog Empire, Pretend You Can Reab audio zine, and Dumb Guy’s Brother Presents. He has released a vinyl ep, a CD, two cassette tapes and two books of poems. ... »

But Charles Fasano is also a photographer, a film-maker, an engraver (beautiful linocuts on his site...) and a painter. Well... let's say that Charly is a complete artist. I don't know how to qualify his art, some kind of underground travel with reminiscences of the Beat Generation, very urban, rather black. [many songs/poem readings to listen to, download for free or buy here, and I encourage you to, because there are many jewels laying there. Try "Three Bachelors" or "Bus One" ...]

But as a painter, Charly has just issued a series dedicated to nose flutes, and is about to show his work in an exhibition in Denver (CO), during the month of March : 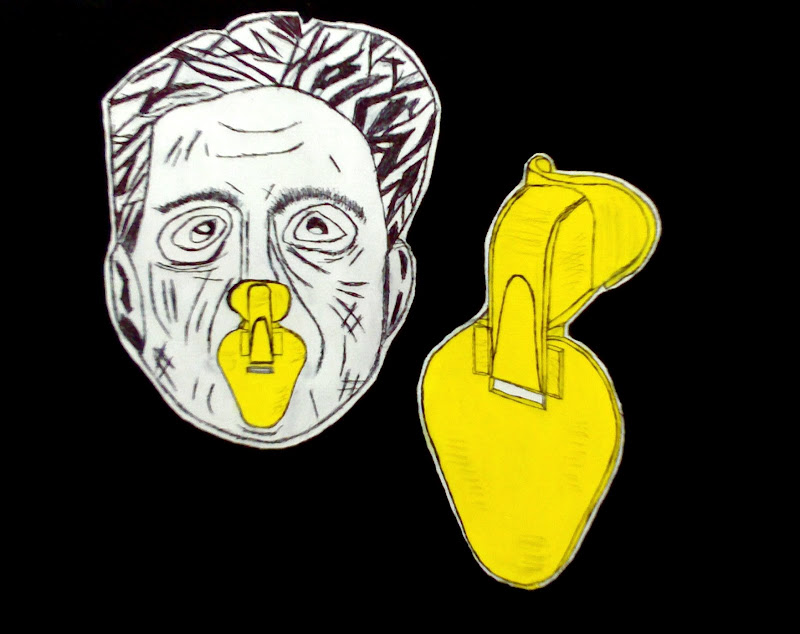 As far as I know, this is a world premiere ! Charles Fasano is probably the first painter showing a series dedicated to our noble instrument... How did it happen ?

« I have always been fascinated by unique items, people and situations and use them as inspiration for my poetry, short films, and paintings. The nose flute, to me, is one of the most interesting items I have discovered. When we moved back to Denver, I started playing along to Cheap Trick songs while I read your website and discovered a small world of folks that have a passion for it. I started going to parties, bars and concerts around Denver asking my friends what they thought the Humanatone was on first impression. I received so many funny responses from part of an asthma inhaler to baby pacifier. Other answers were generally inappropriate.
The idea for the painting series came from a kind of spontaneous and dream like sequence of images involving the nose flute in unique situations. Kind of like a comic book I guess. » 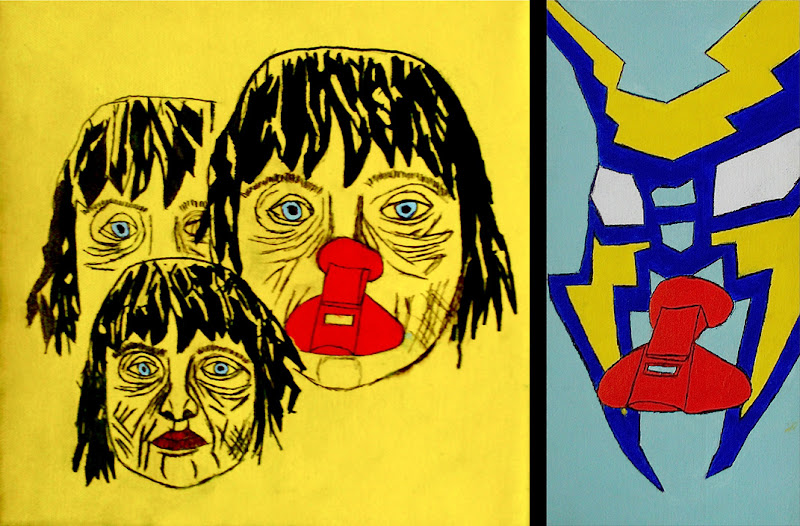 Portraicts with a nose flute stuck on the face or scenes with Humanatones flying in the air like butterflies, dancing with fans or telephones, very colorful on black backgrounds. For those who are not lucky enough to live in Denver, Charly has generously made an e-book with his 21 paintings. Here it is : 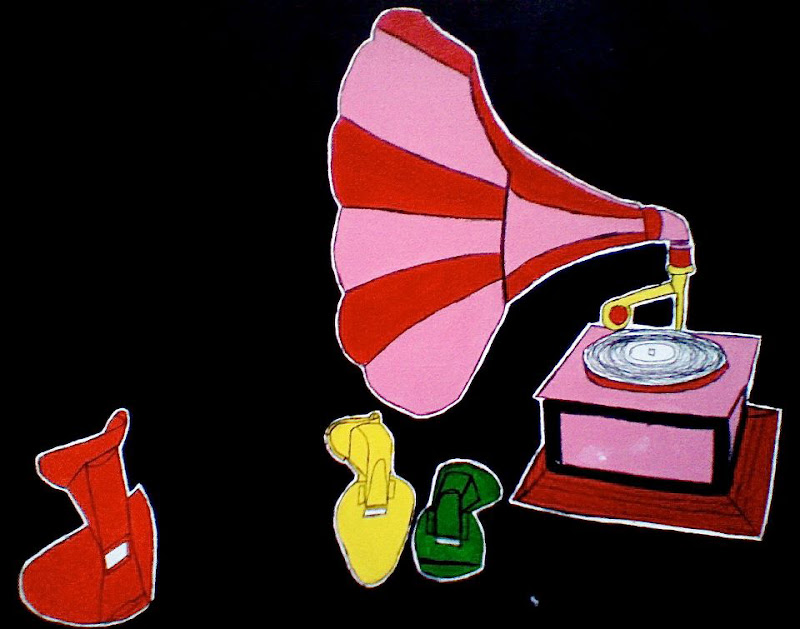 Email ThisBlogThis!Share to TwitterShare to FacebookShare to Pinterest
Libellés : events, Humanatone, United States of A.

We already knew some different ways to get a vibrato with the nose flute; By moving the tongue, the mouth, the flute itself or by a breath control.
But in this video, Mr. Mark Sepic used another radical technique : shaking the glottis!