Nasi-Flauto: What? A Nose Flute before Carter?

Incidentally, I found a news in Brooklyn Daily Eagle, dated of July 6, 1890, and relating the invention of a nose flute in Italy, by il Signor Filippo Atô of Bari! What ? A nose flute in 1890, one year before William Carter filed his patent, and two before its registration ??

A nose flute, maybe, but maybe not "our" type of nose flute, since the "urban type" of nose flutes would not allow to smoke a cigar while playing, but who knows... Maybe a narrow cigarillo could be inserted in the mouth hole, and a musician could alternatively smoke and play... I needed to find more.

…and even earlier, in June: 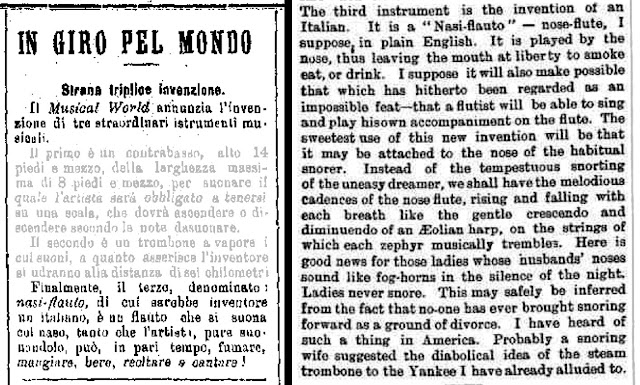 So, not only Mr. Filippo Atô was able to smoke a cigar while playing his nose flute, but also to eat, to drink and to sing. This sounded weird, and impossible to do with a buccal pitched nose flute.

However two points are interesting. First, the journalist at Somerset Free Press immediately imagines an anti-snoring use for the instrument. But more important: the news had quite a big repercussion and was diffused in many countries (Italy, for sure, but also United Kingdom, USA and Australia).

We also learn that the news is originated from the Musical World, the most reknown (if not the only) musical newspaper in the world at this time. It was based in London.

After many searches, I finally found the right issue of the Musical World, dated of 14th of june, 1890. What a coincidence! it is the 14Th of June... 1892 – two years later to the day – that Carter's patent was registered! 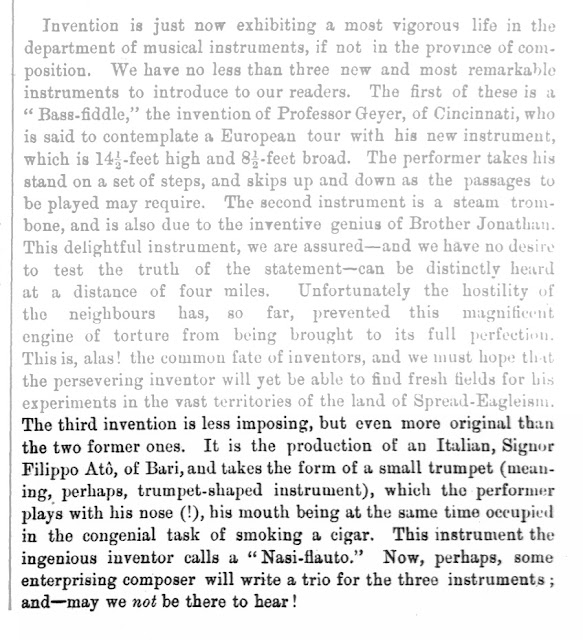 No doubt possible anymore! Filippo Atô's instrument is trumpet shaped! It was definitely not a "urban type" nose flute, and was very certainly pitched by the fingers.

But one thing stays very interesting. We never had any clue about what gave to William Carter the idea of inventing the nose flute... This might be the answer. Indeed, the news was spread all over the world, and I found it in two newspapers published in the NY state. In the NY newspapers, there are no much more details than an instrument played with the nose, the mouth being thus left free. With no drawing, nothing evoking the trumpet shape, and this, just one year before Carter filed his patent...

May we set the hypothesis that Carter got aware of this instrument and decided to invent his own ? 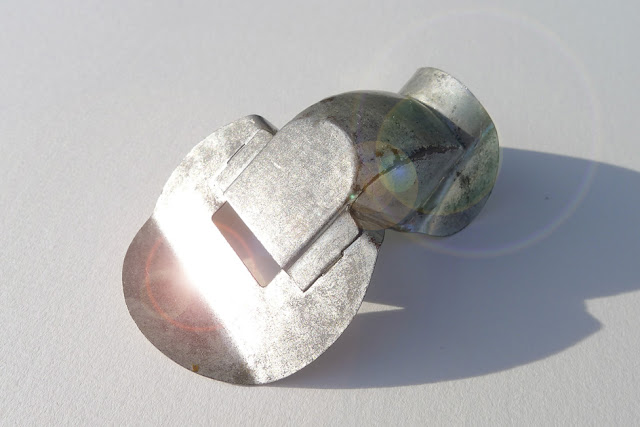 I recently found a beautiful PABRU nos... let's start it all over : Recently, a beautiful PABRU nose flute found me! Indeed, I was contacted by the owner of this flute, who was about to throw it in the garbage, but finally felt the duty of making a search about this instrument, and was driven to this blog. Uff!

I know the existence of only one other PABRU nose flute, and it is part of the Metropolitan Museum of Art collection, in New York. The Met website doesn't show any picture of the flute, just a notice that allows to identify it through the trademark:

The nose flute we got from Mr. Lance Baker is beautifully preserved, and — that's very precious to us – has a known history... Mr. Baker kindly took the time to write it down for our greatest pleasure:


What we know about the Paul Brunner “PABRU” stamped nose flute and how it may have arrived in the United States.

This instrument was found in a box of various possession of my great aunt, Ruth E. Werner, who was born in Hamburg, Iowa. Miss Werner came from a long line of Werners, who migrated from Hamburg, Germany and settled in the Hamburg, Iowa area and surrounding communities of the American Midwest. We suspect this PABRU nose flute may have traveled with one of these family members that migrated from Germany. Miss Ruth E. Werner passed away in 1995 at the age of 92.

We know that she enjoyed music, playing the piano, guitar, violin, and ukulele. So to find this item among her possessions, and understanding that it was a musical instrument was not a surprise.

An interesting find, that could have ended in disaster!

While going through the last of her possession in August of 2017, this PABRU nose flute was discovered, and I knew it had some significance, as the PABRU name and trademark symbol was stamped on it, but more importantly the words “Made In Germany” as well. However, I assumed it may have been part of some other item, or was a small piece of some larger fixture which had been thrown out already. Thus, not knowing what it was, I was very close to throwing it in the trash bin.

In one last effort to find out what this item was, I searched the PABRU name extensively on the Internet, and stumbled across this website, Noseflute.org !!! Success – the mystery was solved, and a great German musical instrument was saved from the trash-bin.

Provided from the estate of Ruth E. Werner.
In care of her great-nephew Lance A. Baker of Mesa, Arizona.

I just had to pratice a gentle ultrasonic cleaning, redress and flatten the "double bend" that is often found on vintage nose flutes, and which is the result of players who wanted to adapt the shape to their own physiognomony. Then I applied a thin coat of "jade oil" (this protective mineral oil). 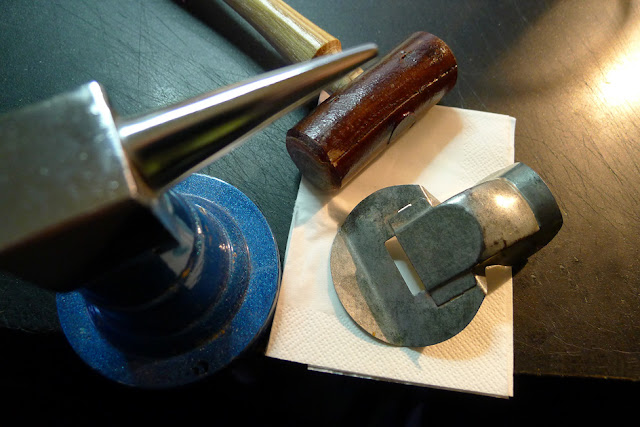 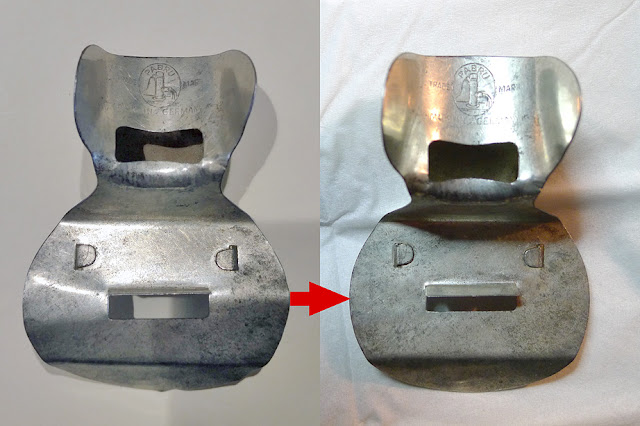 The instrument itself is a very typical German vintage nose flute, with rectangle flaps without rivets, but with an end bent and inserted in a slit. 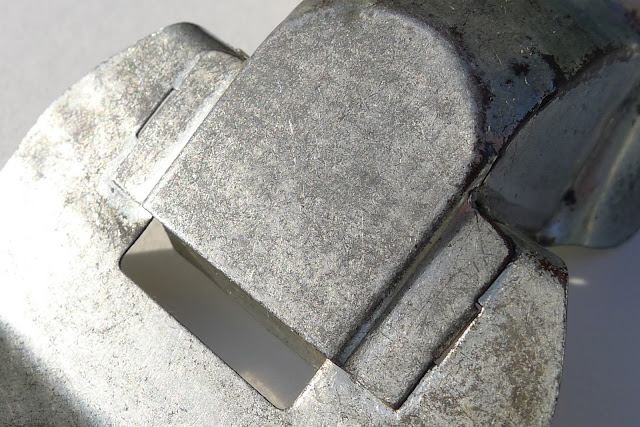 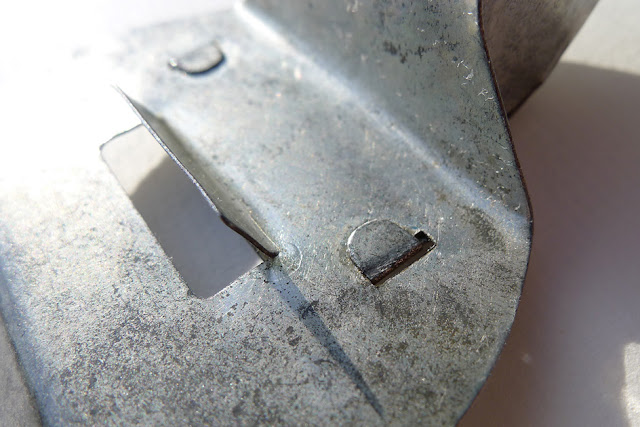 Our sample is in a stunning good condition, with its original nickel plating very well preserved. There are no rust spots, but only wears on the corners.


And have a look inside: most of the nickel plating is still there, which is very rare, as this place generally is a nest of rust for many vintage nose flutes! 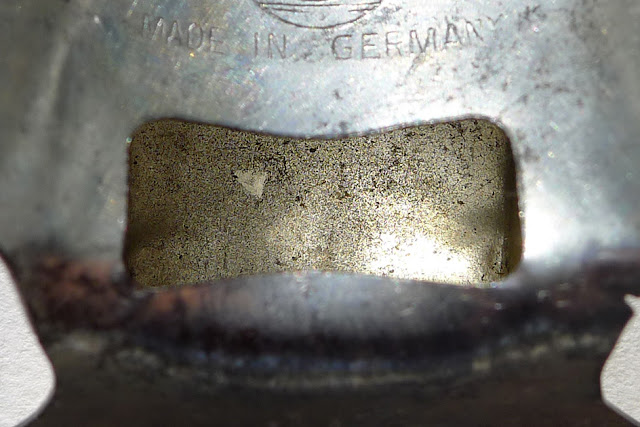 The global shape of the PABRU is smaller than the Humanatone, yet comparable to the generic Nasenflöten that were available in German catalogs. I first thought that these were "unbranded" PABRUs, but a quick comparison show that I was wrong.

The comparison with a Humanatone is stunning as it is obvious the two instruments are absolutely different! The Humanaone is taller and more narrow, has a longer airway, a bigger mouth shield, and for sure, a different closing system, with rivets stamped on the flaps.


But the comparison with a generic German Nasenflöte – the ones from the Meinel & Herold, Gebrüder Schuster, Max Adler... catalogs – is very interesting too. The half bottoms of the flutes are similar, same shape, same flaps, ... But the tops are very different, with a large collar around the nose craddle on the PABRU, while almost nonexistent on the generic ones. Also, the shape of the nose hole is different. So, the generic Geman Nasenflöte *was not* an unbranded PABRU.

Now, take a look at the beautiful stamping with the trademark, described as « an oval enclosing a water pump flanked by "Trade Mark"; (Beneath the oval stamped) "Made in Germany" »... 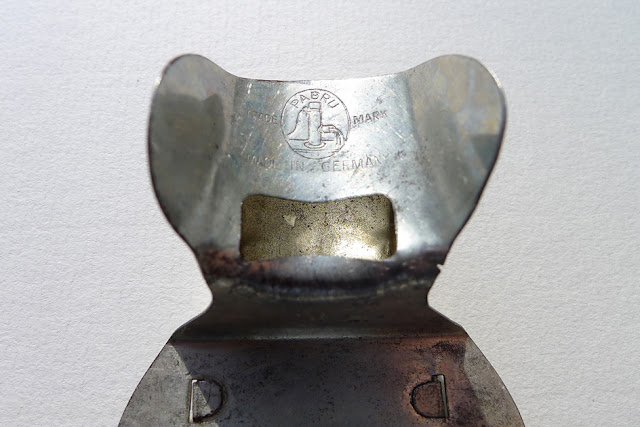 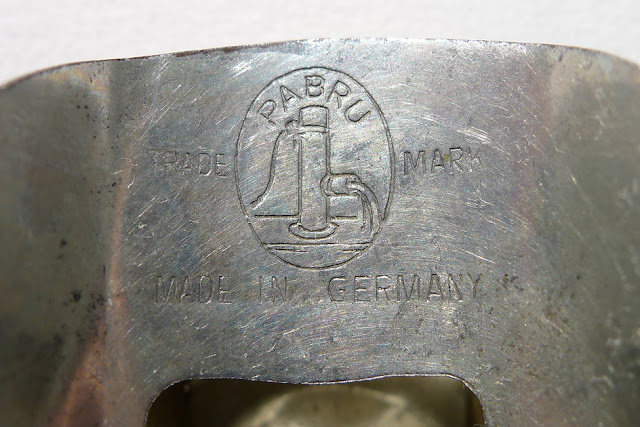 The brand is stamped in an unusual yet very logical place, the nose hood. It's the first time I see a nose flute with the mark on this part. It shows a "water pump" and was stamped on any "PABRU" instrument and was a multiple rebus! 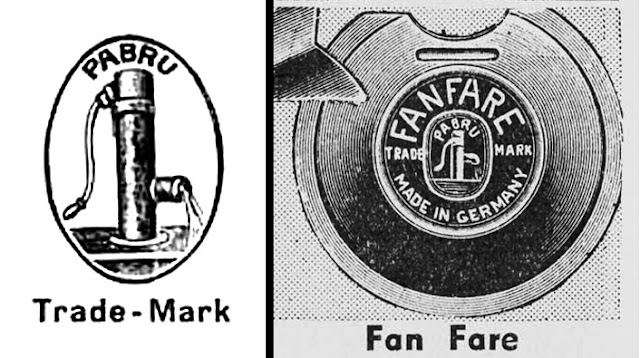 Indeed, the brand PABRU is the abbreviation of the name of the founder and owner of the company: Paul Brunner. And « Brunner » is very close to « Brunnen », which means... « fountain », or « source » in German!

More, Paul Brunner's manufacture was settled in a German region very near Czechia, the Vogtlandkreis (the area for wind musical instruments companies at this time), and particularly in Reichenbach, then in the small town of Brunndöbra, suburb of Klingenthal. The Brunndöbra is the little river that becomes the Döbra after it is joined by the Steindöbra. So, the name Brunndöbra means « the source of the Döbra ».

His own name and his town name: really two good reasons for Paul Brunner to chose a fountain as his logo!

It seems that Paul Brunner began his activities in 1923. In 1925 he is settled in Reichenbach, 10 miles from Klingenthal. Was the company already named PABRU ? Has it already a water pump as emblem ? 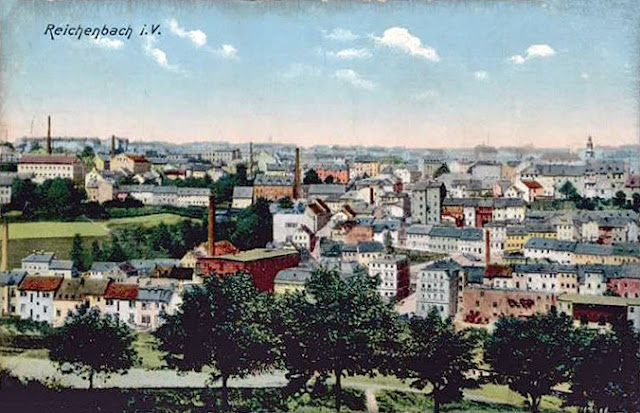 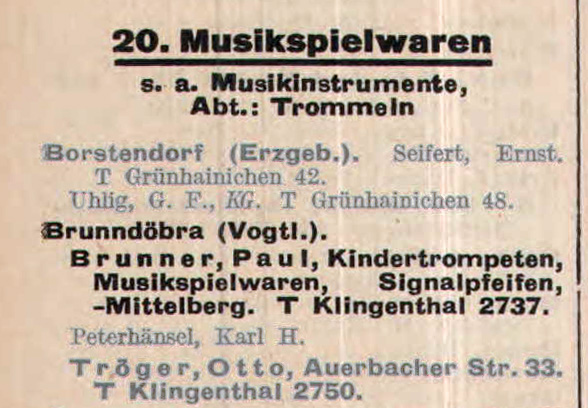 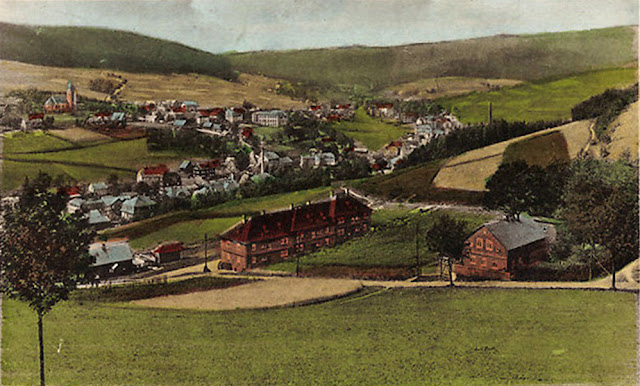 Some PABRU instruments are present in the 1938 Johnson Smith & Co. novelty catalog (USA), in which we can see the kazoos that are findable in Brunner's own catalog. In the same page of the Johnson Smith, there is an advertisement for the Magic Flute – aka the Humanatone – which was the monopolistic nose flute in the USA. So, to answer Mr. Lance Baker: I really doubt that the PABRU Nasenflöte has ever been sold on the American continent. 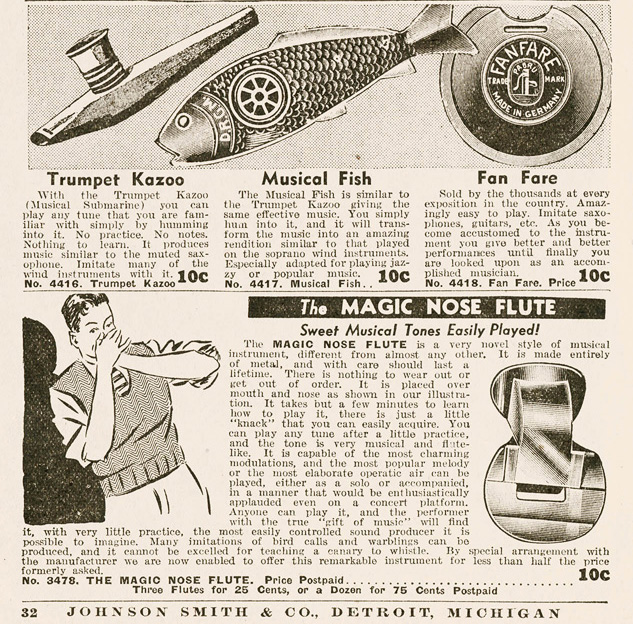 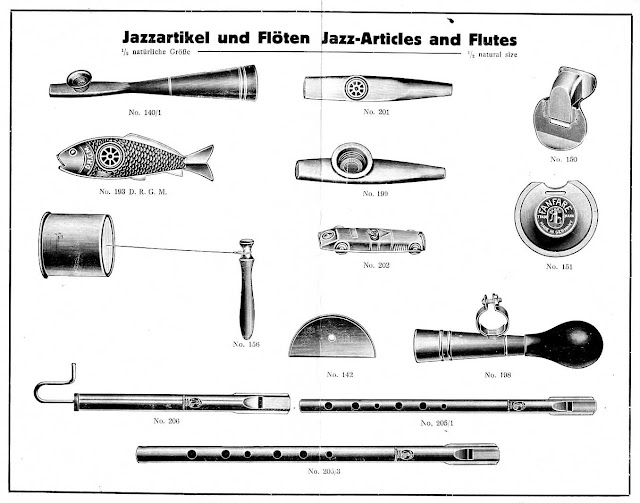 The last trace of the PABRU company I found dates of 1950, in the Johnson Smith & Co. catalog, but still without the nose flute. 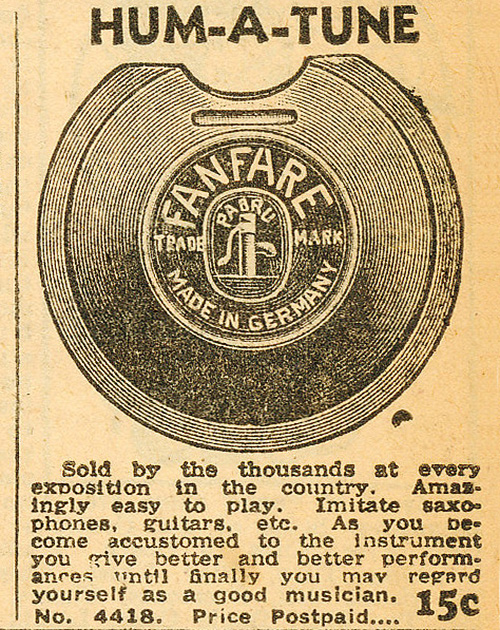 The last appearance I know of a Nasenflöte in a German musical instrument catalog dates of 1936 (Meinel und Herold), and it seems that the small instrument has been declared not welcome anymore (by authorities?).

Finally, remember that Brunndöbra was also the place where Otto Weidlich was settled (since 1873), and that he was the grandfather (or father?) of Kurt Weidlich, who patented and launched the "Schwan logo" plastic Nasenflöte in 1954, in Göttingen (DE), in association with Günter Lohse [please see this post] 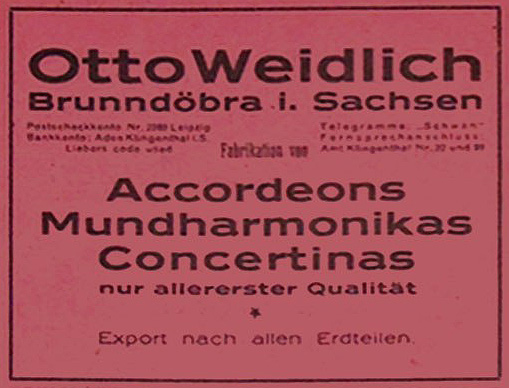 To complete this very long article, I would like to thank Mr. Lance Baker for having provided a beautiful PABRU Nasenflöte to our little museum, and also all the info and help he was able to supply. Did Miss Ruth E. Werner buy this instrument before 1935 ? It is likely (according to Mr. Baker). So, Paul Brunner should have used the « water pump trademark » before settling in Brunndöbra, and this nose flute should come Reichenbach.