A funny performance, but with a skilful playing, by sensei Mosurin. I don't know what exactly is the little puppet, but she does like to dance on the rhythm.

I recently had the great opportunity to purchase an old tin nose flute from Scott B., a gentleman living in North Carolina. There was no difficulty at all in identifying the instrument, since it has a very perculiar shape and is stamped with... its name. Many thanks to Scott for having helped me building the collection: the Magic Flute is a real milestone in nose flute history. 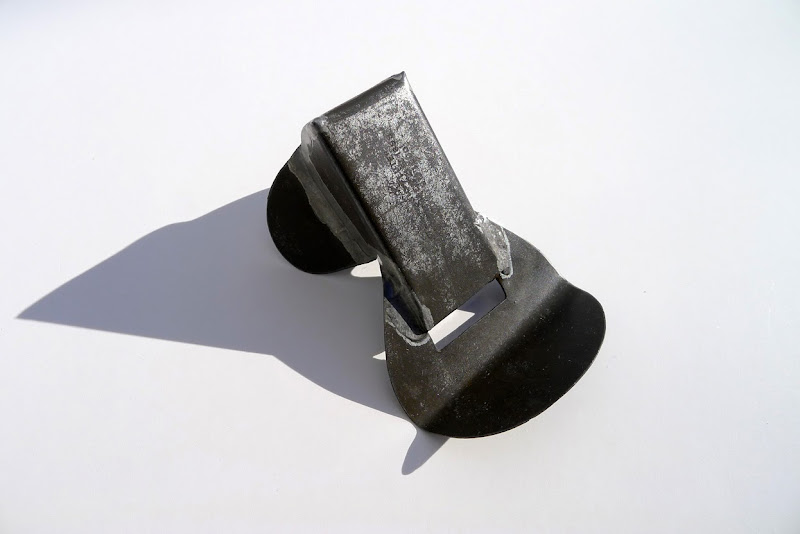 This nose flute is easily recognizable by the right angle formed by the top of its air duct. Another typical feature of this instrument is the vertical rectangle shape that has had been cut for the air entrance (remember that this cut is an horizontal oval on a metal Humanatone). Also, and due to its construction, the two nose wings are convex into the nose shield, while they are concave on other models where they form a nose cup. 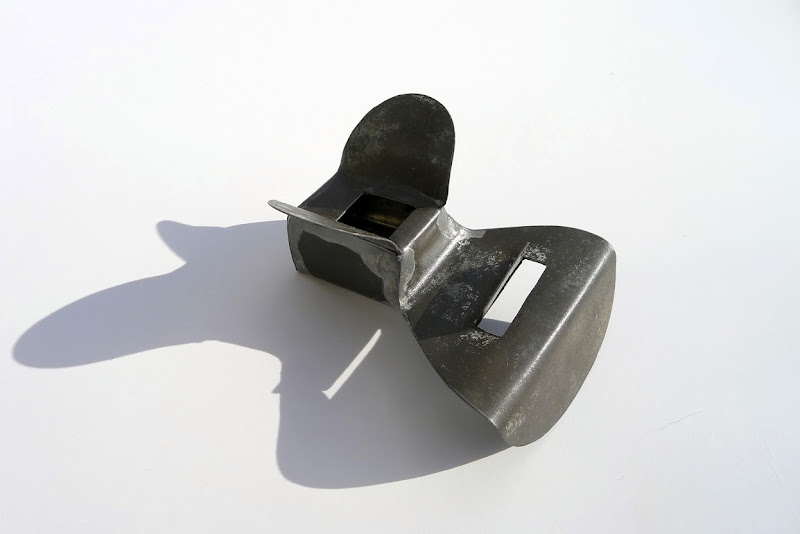 So, let's say that the Magic Flute is very different from an early Humanatone, but only for the top half, since the mouth shields are very comparable. It is interesting to see both intruments together to make obvious the differences: 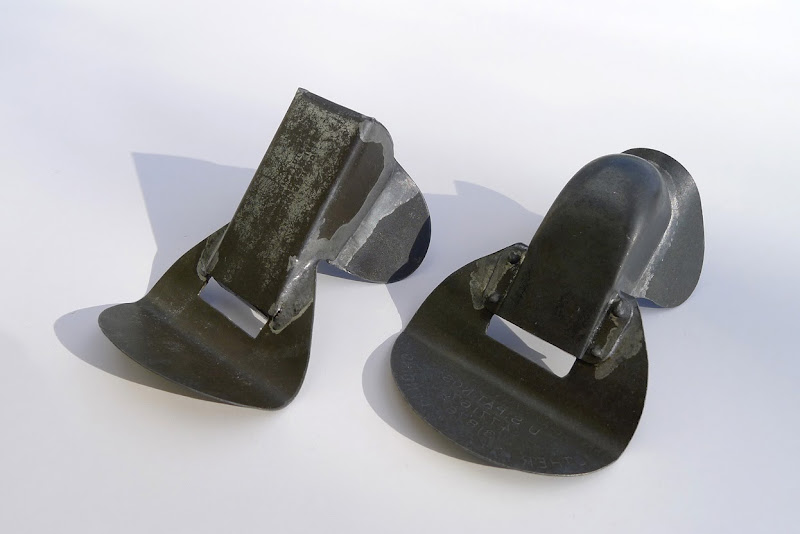 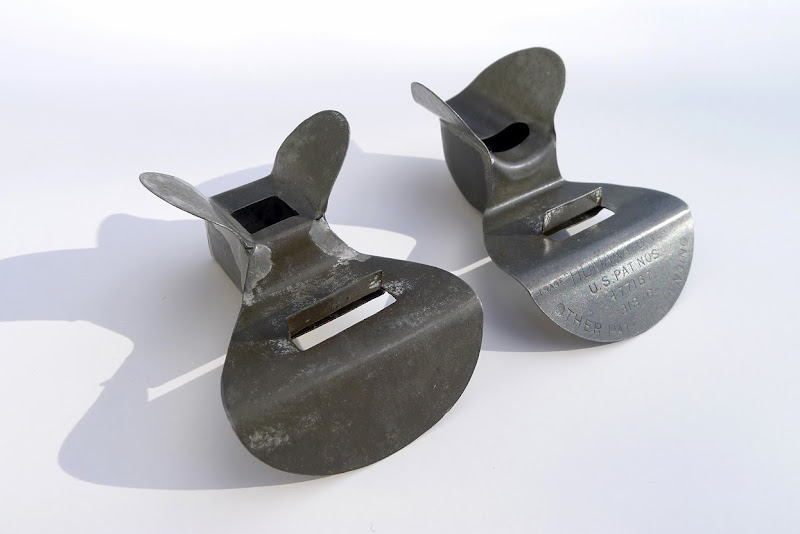 But most peculiar characteristic of the Magic Flute is that it was made with only one piece of tin plate. As far as I know, it is the only manufactured metal nose flute that has ever been made from only one piece at the stamping press. I designed for you the template of the flat instrument : 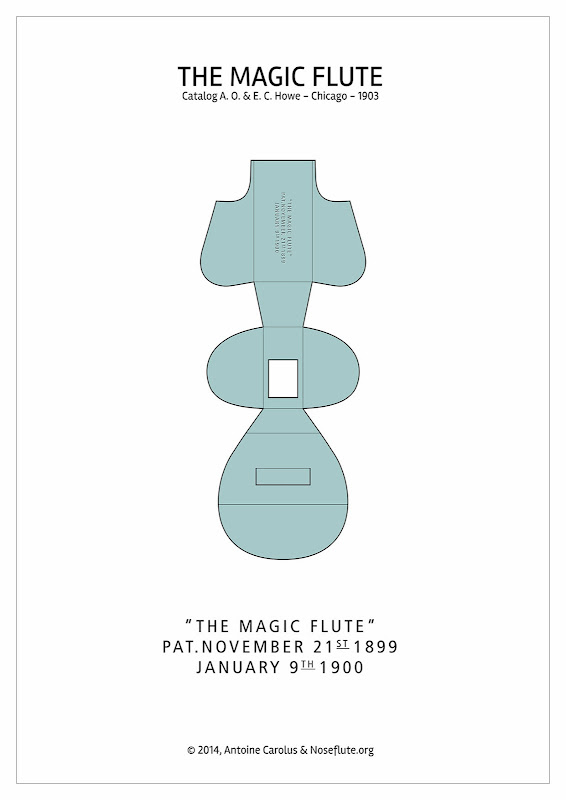 The Magic Flute production was frugal in metal plate, since the pattern interlocking is nicely efficient: 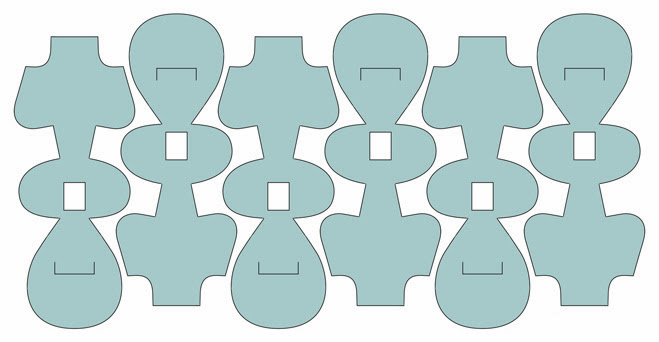 The Magic Flute appeared (for the 1st time?) in the music instruments Howe catalog, in Chicago, 1903 issue (which means a probable 1902 printing), meaning its production is prior to the Stivers' Humanatone [July 1903] (but the brand "Humanatone" is earlier: 1893-94).

On the other hand, the Magic Flute is stamped on the air duct cover: 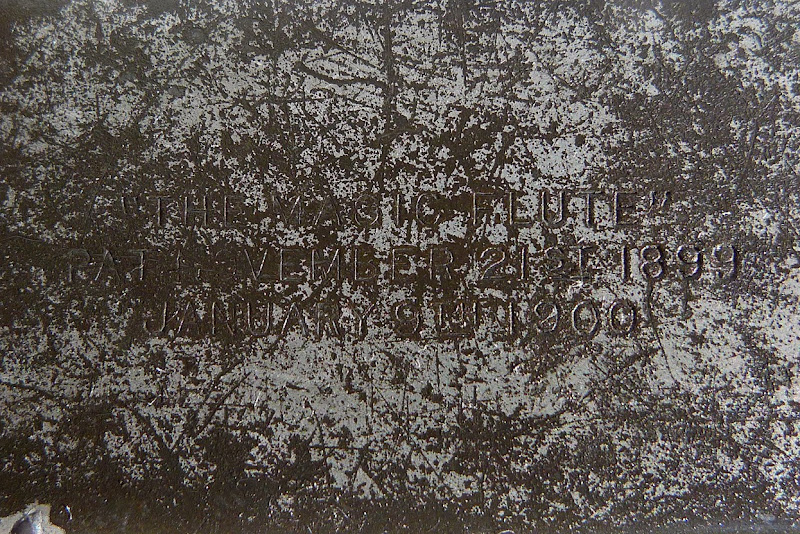 Since we know that the Couchois' whistle was really produced, the Magic Flute was the third model of nose flute ever manufactured (afaik), just before the Humanatone. We may state that the order of appearance was:

And according to this, we are able to specify that the Magic Flute was the first nose flute with a mouth shield, invention that became typical of any metal or plastic nose flute (metal Humanatone, Wunderflöte, plastic Humanatone, Schwann, Bocarina...). It was also the very first model proposing a lip rest (that is still in use on the Schwann model).

My hypothesis - but whether I already possess "sparse pieces of evidence", I built no real "historical proof" yet - is that William Carter launched his nose flute under the name Humanatone (the patent name was "Nasalette") at the Chicago Columbus fair in 1893 (there is a 1894 record of the Brand Humanatone, plus a late testimony in a 1922 journal of the presence of the Humanatone at the fair). Chicago Fair is where Couchois (piano seller) discovered the instrument, then built his own in New York, which clearly is an improvement derivating from the original Nasalette. Did he buy/use the brand Humanatone? It is likely, because a 1905 testimony state that Couchois , as a "fakir", was playing and selling Humanatones "4 or 5 years ago", that is, in 1900-1901. This is the moment when Couchois' nose flutes are manufactured. Can we imagine that Garrett Couchois would have produced his own nose flute but sold another one? Certainly not. So his own should have been named "Humanatone".
Then, in 1902, the Magic Flute is issued, stamped with Couchois' patents numbers. (Was it produced by Couchois too? I have no idea on that point). What is sure is that the next year, the Stivers bought the rights from Carter's and Couchois' patents, and registered the trademark Humanatone. But that's not all: they also bought the brand Magic Flute (check my evidence here). It is more than likely that the shape of the Humanatone was an improvement of the Magic Flute model (but the Humanatone is stamped with Carter's and Couchois' pat. numbers). Then, both the brands Humanatone and Magic (Nose) Flute were used to sell the same instrument, depending on the "sales target" (Humanatone as an instrument, Magic Flute as a toy), and finally with no regards on the type of public anymore. In 1943, Fred Gretsch bought the name Humanatone and associated it to another model of nose flute, the plastic injected one, patented by Ernest W. Davis in 1940.

One last word, and maybe the most important. The Magic Flute was a good instrument, with a precise and powerful sound! Here is a short sound sample: