It's been a long time I want to make a post with the incredible nose flutes I received from Miss Chisato Nakamoto. I already published some photos in Dec. 2014, but since, I had ordered from her the frog hanabue that was already made, and on special order a chameleon for me, and the cat Mr. Schubert for the Nosy Diva.

A very sad event occured before I published the pictures of those great nose flutes, and I didn't want to cause more pain to the Diva, whose beloved Schubert had joined the angels paradise. Now, I feel that it's possible without causing too much more pain.

So, I received a beautiful parcel, containing three little treasures: 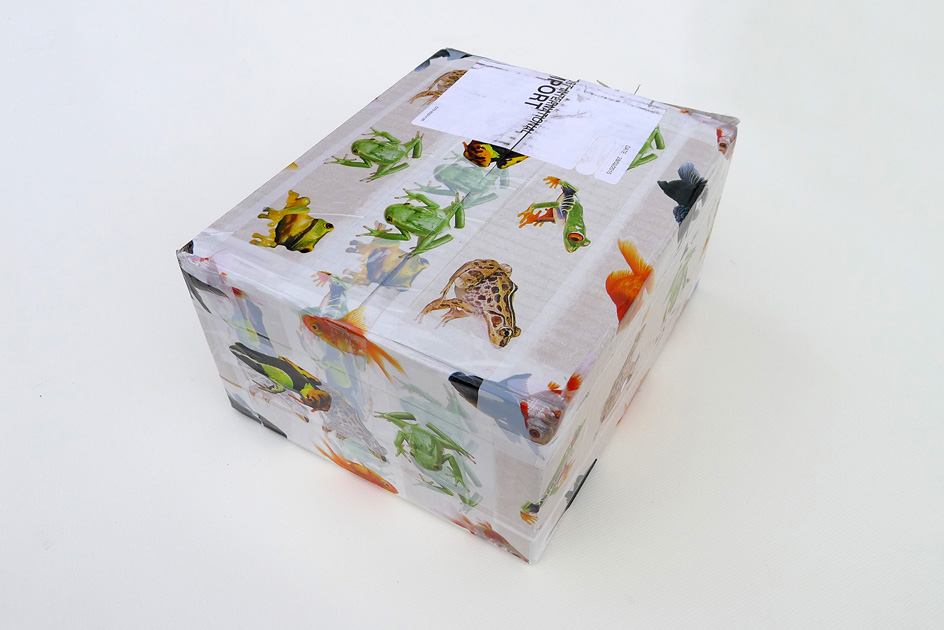 The Frog was already made, and I already posted a picture of it. I found it so lovely and beautiful, that I ordered it. It is a really stunning nose flute, because it is piece of art as much as a good instrument!

What looks very impressive to me, besides the resemblance – including the idea of a wet skin, the delicate toes or the sweet and peaceful eyes – is the way Chisato was able to keep a real frog's shape, whilst modifying it with the purpose to make a comfortable nose flute. Particularly the underside of the head, which became the nose saddle, should have been a real challenge... and the response to it is stunning.

The Chameleon is a special order. Here again, it was a challenge. How to turn a chameleon into a nose flute ? Where to put the intake ? Where to set the fipple ?...

The quality of the grained skin and the color shades, the bloated gluey tongue, ready to catch a fly, the tiny sharp white teeth, the shiny black eye... every detail show the great art and skill of Chisato Nakamoto.

Franz Schubert was the most sweet and gentle cat in the world. He also was a great singer. I sent some pictures of him to Chisato Nakamoto, who did a great job here too. The Nosy Diva and the old little 'Schubi' got thrilled by the nose flute. Look at that:

I suppose that the difficulty was notably coming from the prominence of a cat face compared to the relative flatness of a nose flute. Anyway, the Schubert nose flute is a success!

Mr. Schubert was very nosy with with the Schubert nose flute!

To show you how great — besides being beautiful – nose flute Miss Chisato Nakatomo made, here are some videos we made. Both are kind of archives, dating of more than a year. And we miss Mr. Schubert very much.

The Don McNeill's Breakfast Club was a radio variety show, that ran from 1933 to 1968, at early morning.

Amongst the artists performing in the program, 'Archie Sweet', allegedly the Breakfast Club 'janitor' in 1943-44, was a one-man band. He proclaimed himself the 'World's Greatest One-Man Ban', and was challenged in a 'murderous musical struggle' by 'Panhandle Pete', with Paul Whiteman as commentator.

Lincoln Sunday Journal, Anniston Star and Indianapolis Star of the 5th and 6th of March, 1944 : 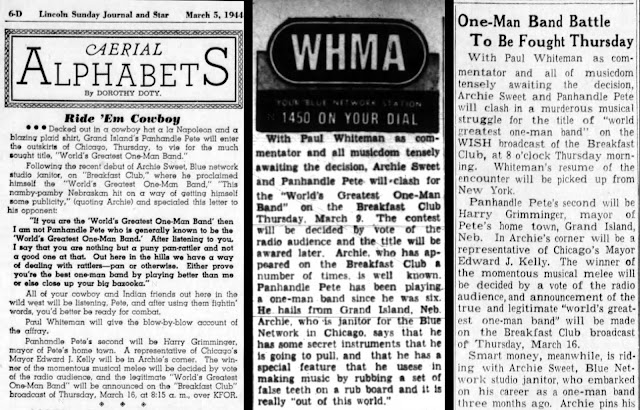 What is interesting for us is that Archie Sweet « hopes on victory on the humanaphone » (sic): 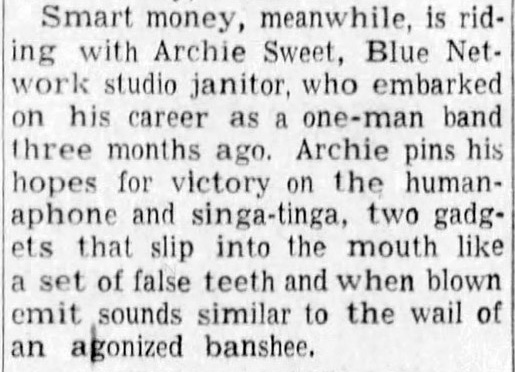 We don't know what is a 'singa-tinga'(a jews harp?), but the so-called 'Humanaphone' was definitely a 'Humanatone'! It was even one of the first plastic Humanatones, produced by Gretsch since (Autumn?) 1943. Indeed, we found a photo of Archie Sweet. It is very rare to find vintage pictures showing nose flute players with their instrument, so we are glad! 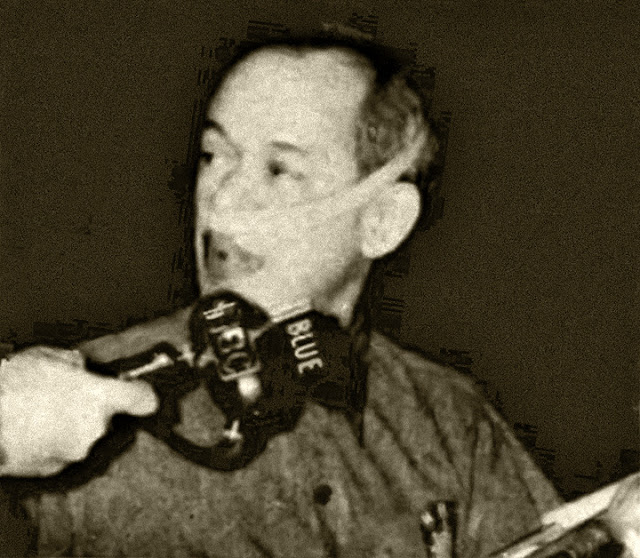 This post is the sequel of News from Korea - Part I : New Patents

If you ever look for Korean nose flutes (코피리 - 'kopili'), you'll probably find traditional long flutes, or some modern performers playing a classic flute with their nose, or other joyful experiments, as in this commercial for a nasal spray. But you should not find many 'buccal driven' (what I call 'urban') nose flutes. Well, this was right up until ten years ago, or so.

Indeed, Mr. 장광현 ('Jang Gwanghyeon'), author of the patents we presented in the Part I, has been crafting modern nose flutes since around 2005... And beautiful and funny ones!

As you can see on the very last picture, a lot amongst Jang Gwanghyeon's nose flutes have a slidable duct cover, and this might explain the assertion « Conventional nose flute includes (...) a throttle », as seen in Part I.

I don't know much about Mr. Jang Gwanghyeon, not only because of the poor translation available online for the Korean language, but also because the name 장광현 looks to be rather common there. Anyway, Jang Gwanghyeon is not only gifted with his hands, he is also an inventor and a business man, as his three nose flute patents demonstrate, and a humanist, as we'll see below. 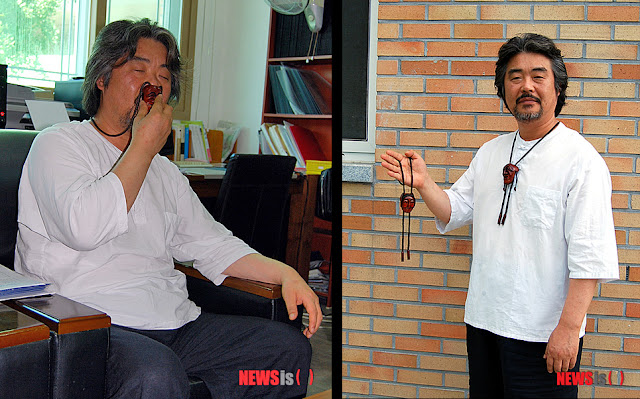 So, Jang Gwanghyeon filed several patents, and it was not just for fun, as you can expect it. Apparently last February, a manufactured nose flute model appeared on the market, shaped as in the last patent (KR1015458350000), available in four version, the Koroa™, ('코로아'), after a trademark registered Sep. 2014: 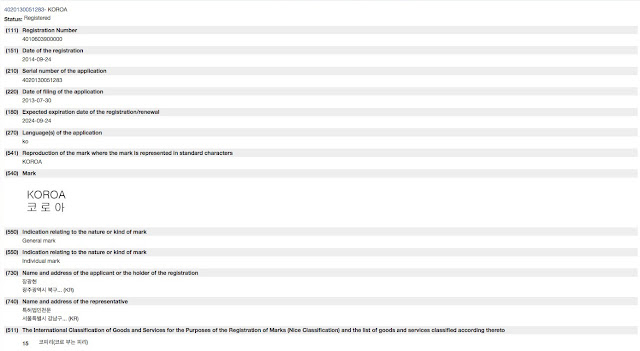 « The name of this product is widely used to ride the wind Korean nose is called Roa (KOROA) resembling Korea (KOREA). » [Google translate]

Well, not sure to understand the Google gibberish, but I know that "Ko" ('코') means nose. And maybe did I understand that 'Roa' means 'wind wave'. So 'Koroa' would say something like 'nose wind surfer' ... plus the pun Koroa/Korea.

Here are the different Koroa™ nose flutes. But as you can see, 2 or 3 month after their launch on koroa21.com, they all are sold out!:

4 different versions called Little Prince ('어린왕자'), More Beautiful than Flowers ('꽃보다아름다운'), Inner World ('내면의세계') and Love Forever ('사랑은언제나'). Each nose flute is (was) sold in a box, with a CD, a pouch, a strap and a cleaning cloth. As you can see also, the Koroa™ is inset with a costume gemstone.

Again, I didn't understand all the content of the texts I passed through Google translate, but I understood that Mr. Jang Gwanghyeon has a humanist/humanitarian purpose in the mind when creating the Koroa™. He explains that nose flutes can be an educational tool and a link between people from different cultures.

[Google gibberish]: « To transcend religious and cultural knowledge through the nose and think that would be a cultural product whose ages anyone can get a response.

(...) « Race, language, and readily available beyond all cultures, co-products Loa will play the role of mediator to symbolize love and peace to the network means connecting the world do not even pay for one price without a doubt ...»

« More specifically, the practice is to tell you the date of this sleep condition to participate in the sales and business co-Loa is part of the corporate name of the company to participate directly appointed as royalties to help disadvantaged in their donation or UNHCR. » 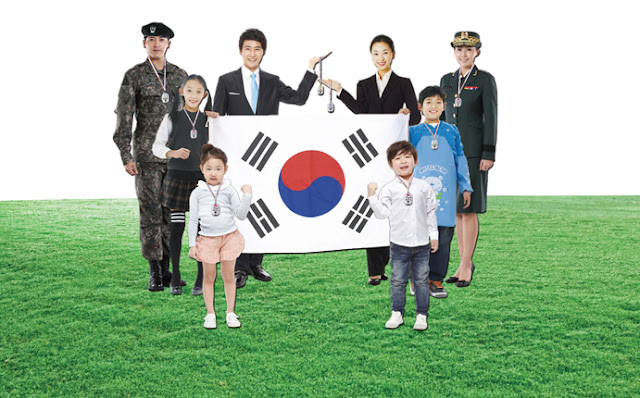 Ypu can see some videos of Mr. Jang Gwanghyeon playing his nose flute on his Facebook page: here and here.

Here is the 'official' video on Gwanghyun Jang's Youtube channel: