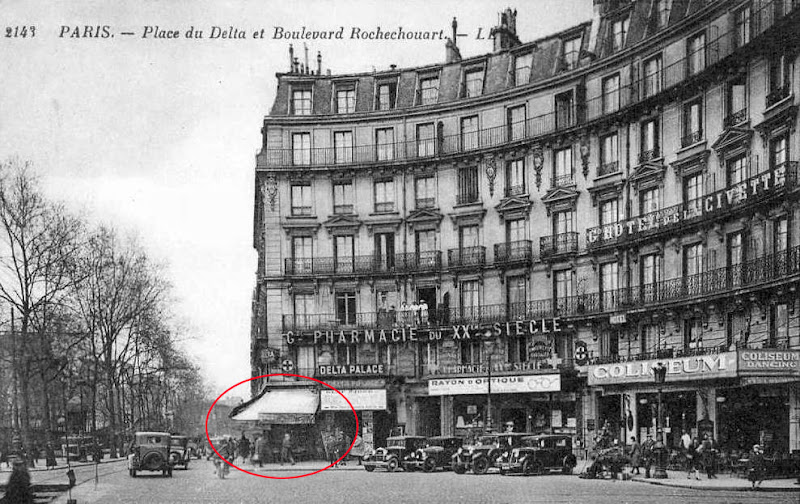 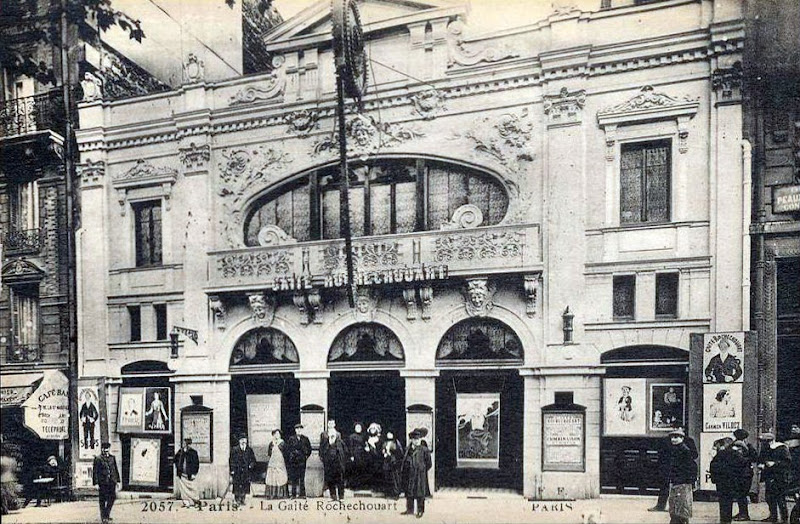 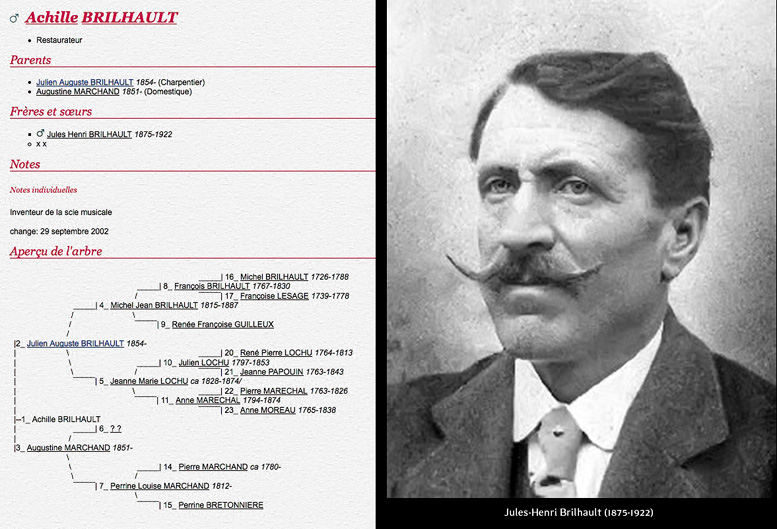 A rather psychedelic video by Albaire68 on DailyMotion. It is called Mozart Flûte à Nez (Mozart Nose Flute) and shows the musician playing Ah! Vous dirai-je, Maman, by Mozart, on his guitar and nose flute. Nicely played!

End of December were published two press articles by Annica Müllenberg and about Hans Christian Klüver, aka Mister Swing, and the Trio Royal. And thus... two great articles about Nasenflöte playing!

The first one was published Dec. 29 in the Weser Kurier: 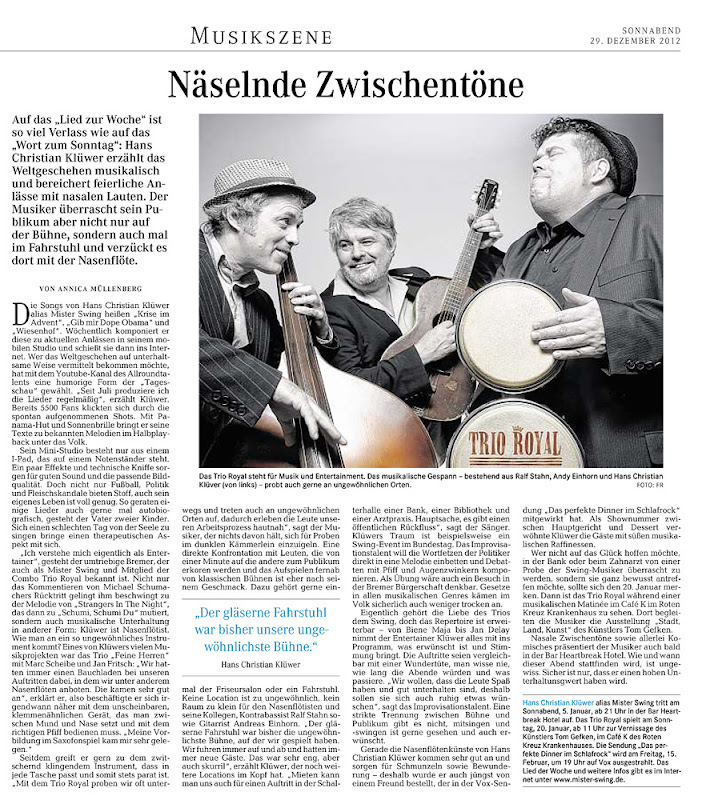 The second article was published the next day (Dec. 30) in the Bremer Anzeiger : 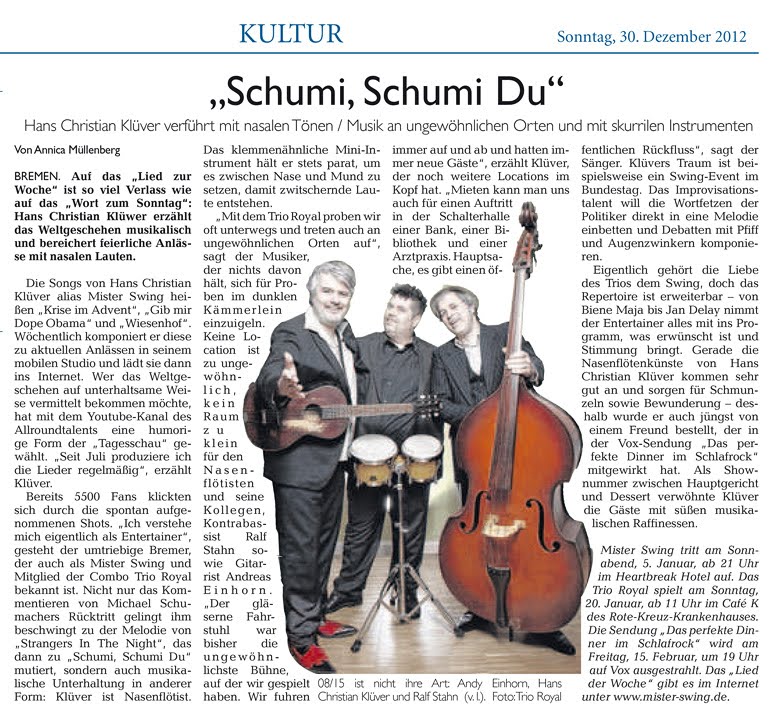 [Sequel of the post: Dutch advertisements - Part I: The Colonies]

It is not possible neither to be affirmative about the appearance year of the first nose flutes in the Netherlands, mainland. I found much fewer advertisements in the newspapers than in Dutch Indonesia, and I suppose the explanation is that they were more specifically localised in musical or toys catalogues, which might have been less spread in the colonies.

While the first neusfluit ad found in the indonesian papers dates of 1923, I found none in mainland press before 1927. It's a music instrument shop of Maastricht, selling nose flutes for Saint Nicholas Day. Next year, also for the same celebration, nose flutes are to be sold in Amsterdam, in a stationery.

And that's almost all. Only ads for Saint Nicholas Day. However, nose flutes are not totally absent of the press. They are found in "want ads", like in this 1928 one... 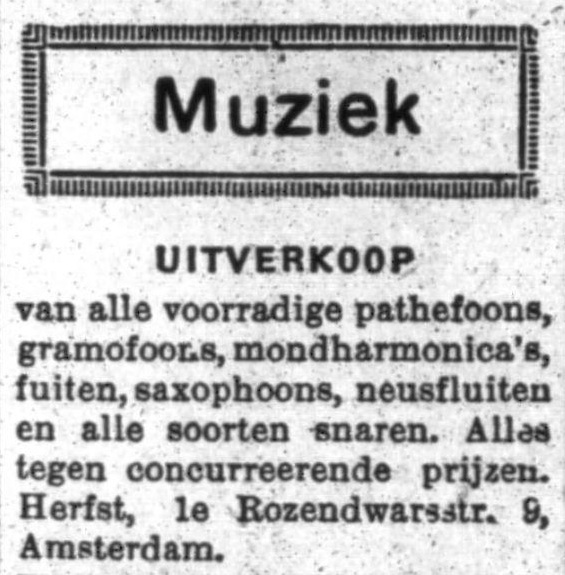 Neusfluiten also appear in stories, serial novels or reports on jazz music. Rarely, they make an apparition in the back pages, like in the following article published on 10th of February, 1939, in the Leeuwarder Nieuwsblad: 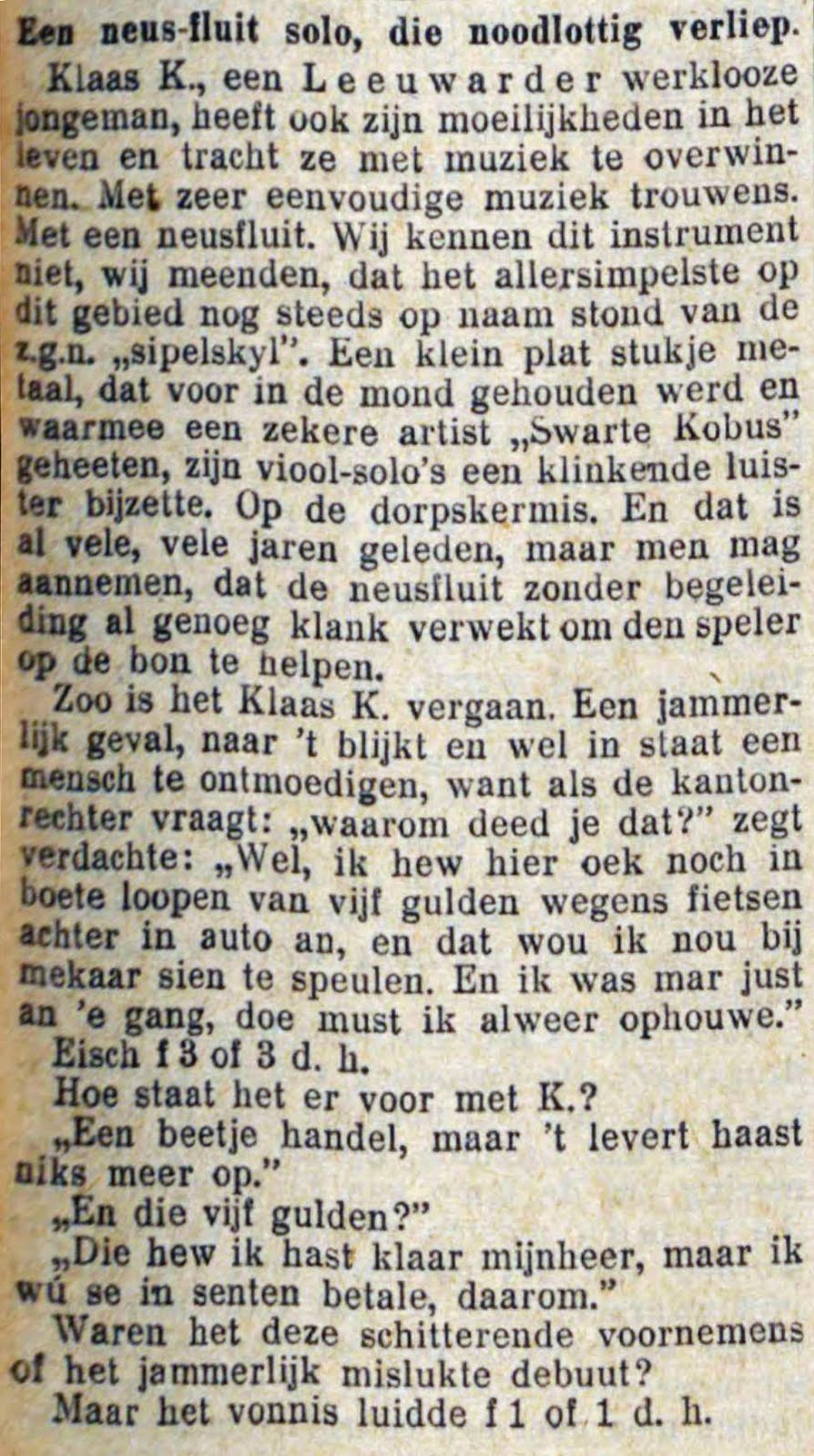 Mr. Maikel Mei had the gentleness to translate this little gem for us, thanks a lot to him!:

[The original article contains Frisian as well as slang from Leeuwarden, the capital of Friesland, in the north of the Netherlands.]

Klaas K., an unemployed young man from Leeuwarden, tries to overcome his difficulties in life by playing music. He uses very simple means to do so, a nose flute. We never heard of this instrument and had always thought that the simplest of musical instruments was the so-called “onion-peel”. That was a small, flat piece of metal held inside the front of the mouth, which was used by a certain artist called “Black-haired Kobus” to accompany his violin solos at fun fairs in the area, many years ago. Even without accompaniment the nose flute itself makes enough noise to fine its player. [It is suggested here that busking was illegal].

This is exactly what happened to Klaas K., apparently a sad case. When the judge asks him “Why did you do it?” the defendant states “Well, I also had a fine left to pay here of 5 Florins, for riding my bicycle in the slipstream of a car, and I just decided to make that money by busking. I had only just started when I already had to quit again.” Charge: 3 Florins or 3 days in jail. How is K. doing today? “Just a tiny little bit of trade, but the yield is only very small these days.” “And those 5 Florins?” “I nearly have them, your honour, but I wanted to pay them in cents, that’s why.” Whether it was this wonderful resolution or his unfortunate and unsuccessful debut on the nose flute, the sentence was 1 Florin or 1 day in jail.

Dutch advertisements - Part I: The Colonies

Finding out when the first nose flutes were available in the Netherlands is a difficult if not impossible task. However, at least we can date when they (first?) appeared in the newspaper advertisments.

I found many ads selling neusfluiten in the dutch press, and was surprised to discover the first ones were published in the colonies. Indeed, the Kingdom of the Netherlands had colonized numerous regions of Southeast Asia, where the locals were used to play traditional nose flutes. Well, the metal nose flutes sold there were destined to the conquerors, not to the natives.

The first ad I found dates of June 30, 1923, and was published in the Bataviaasch Nieuwsblad. The shop — Toko "De Leeuw"— was based in Weltevreden (Jakarta). 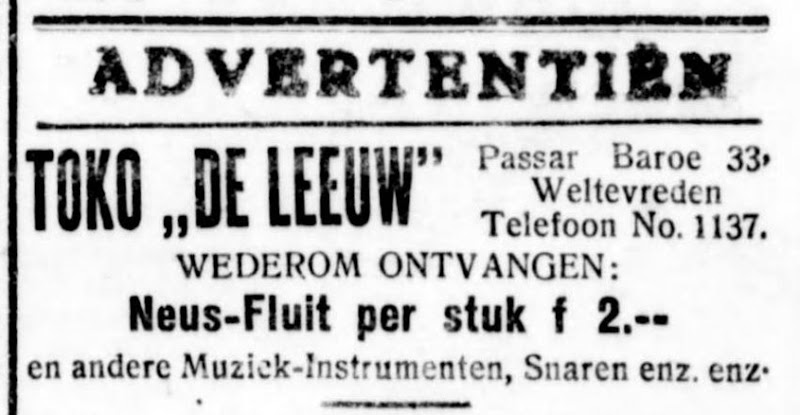 While the is no proof the item was a metal "urban type" neusfluit in this 1923 ad (it could have been a silingut or a mongurali, why not?), there is, on the other hand, no doubt that the nose flutes sold by W. Naessens & Co. in 1924 in Batavia (Jakarta), were of the modern type: they are announced after modern songs or sorted among other Jazz instruments (trumpets, xylophones, jazz-flutes, etc.) 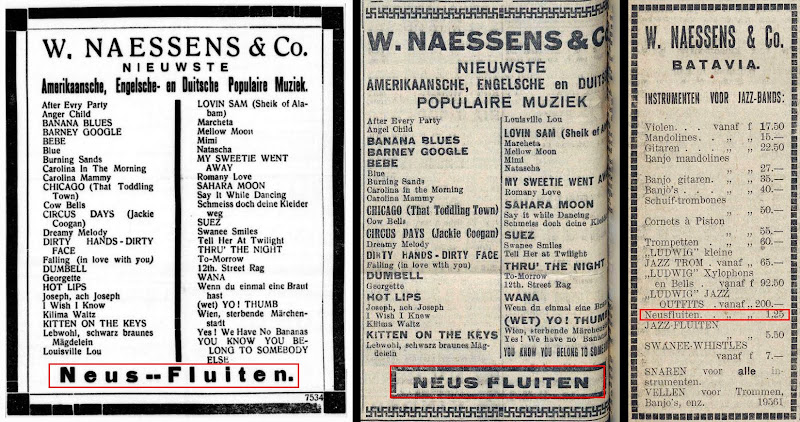 The following ad, first published Oct. 16, 1925 in De Indische Courant (Indonesia) is very interesting by several points. First, it shows a drawing of the flute. But more, the flute is displayed beside another item — the Fanfare sing-shalm: both of these instruments (and their drawings!) coming directly from the early 1920's Max Adler international catalogue.
Note that the nose flute has no upper lip rest, and thus, looks very very similar (no evidence it is it, however) to the Wunderflöte (first version, the Goldstein's one). 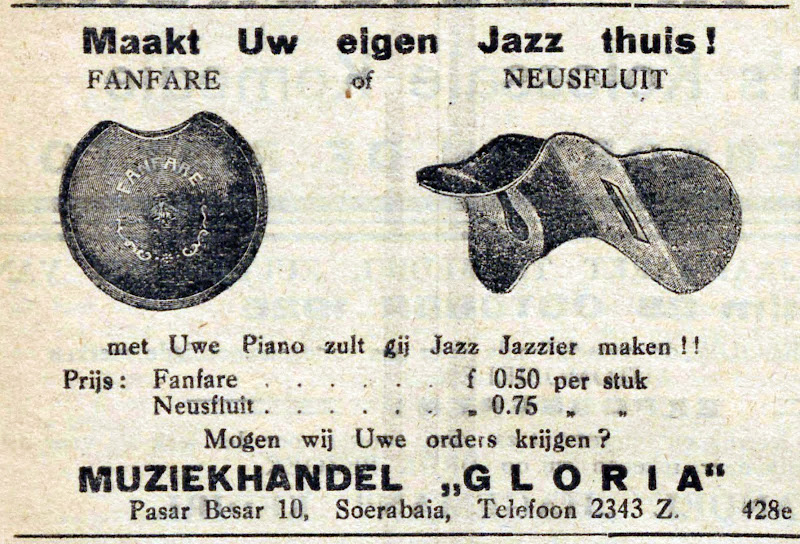 The first version of the Wunderflöte: 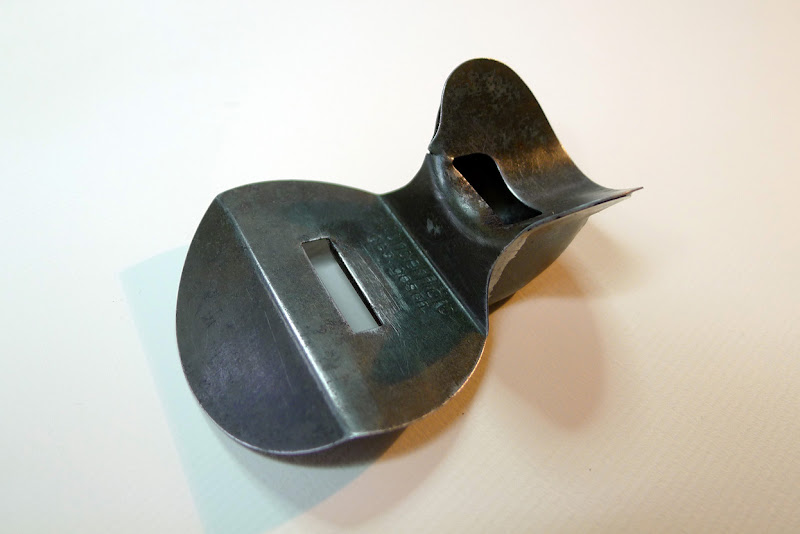 The Bataviaasch Nieuwsblad continuously hosted advertisements for neusfluiten, by different competitors. However, there is no doubt they all were selling the same items, coming from the Max Adler catalogue.
Following, ads from 1925 and 1927. In the 1927 one, it is written "Neusfluit: met handvat (nieuwste)" meaning "Nose flute: with handle (newest)"! What was this "new" nose flute with a handle? I do not know the 1927 Max Adler catalogue but, as far as I know, any nasenflöte available in german catalogues from 1925 and until (at least) 1936 were the ones made in Brunndöbra by Paul Brunner. And had no handle.
The only nose flute I know with a handle is the Cello-Phone. Was that the description of this English or American instrument? I would be surprised of that...

(Note that the Fanfare whistle was a product by Paul Brunner) 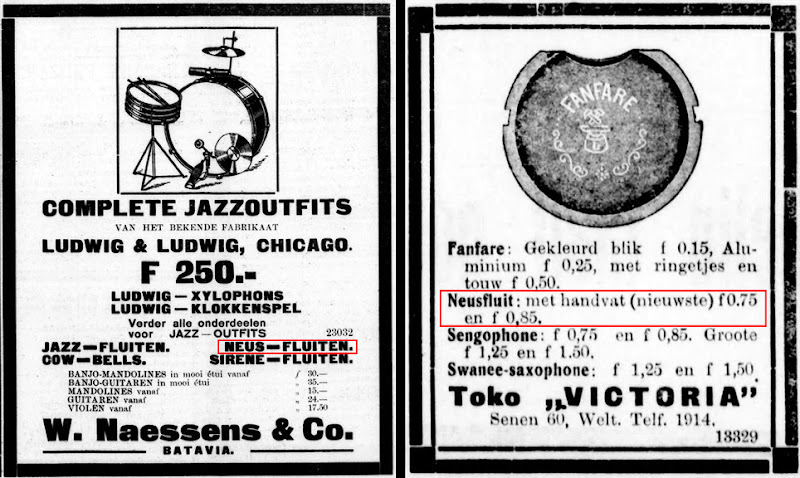 In 1929, the flame for nose flutes was not extinguished in the colonies, and De Algemeene Muziekhandel Stiphout announced in De Sumatra Post that the shop had received again some stock. 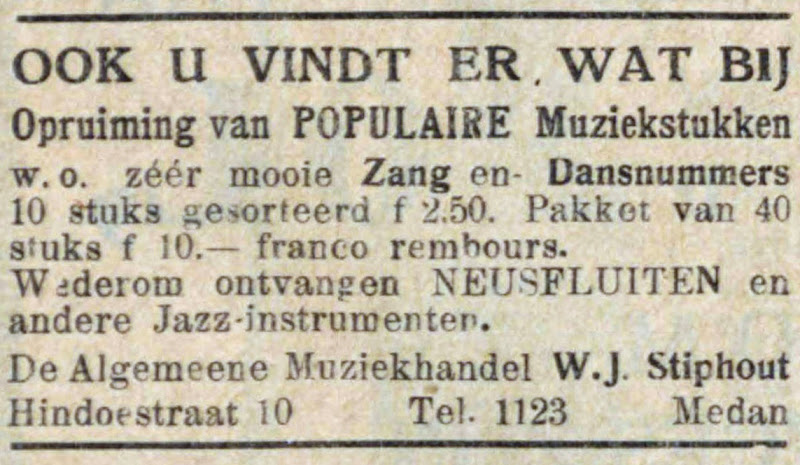 The rhythm of ads for nose flutes decreased then, but those didn't totally disappear. Here in June 1937 (De Indische Courant) and for Saint Nicholas Day 1938 (Soerabaijasch Handelsblad, Surabaya): 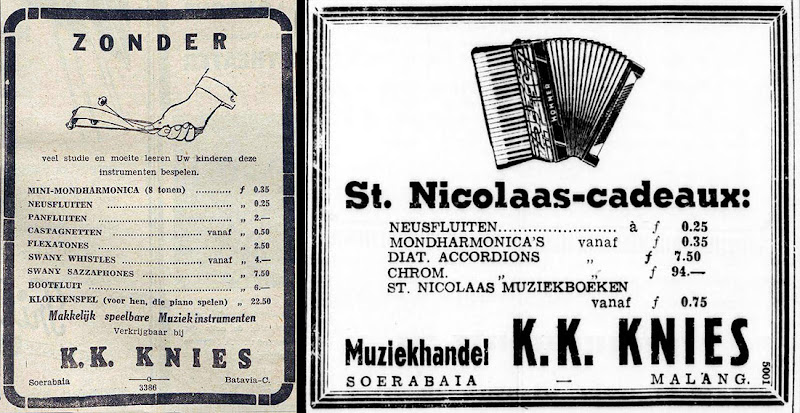 As in any Western country, the metallic early nose flute sales stopped then. Gretsch launched the polystyrene Humanatone that was especially packed to be sent to the Boys at war.

Surprinsingly, on Dec. 3, 1953, the Java-Bode newspaper published an advertisement for neusfluiten, as gifts for Saint Nicholas Day. Were they plastic Humanatones? Probably. Or maybe the flat metal one produced in Japan? 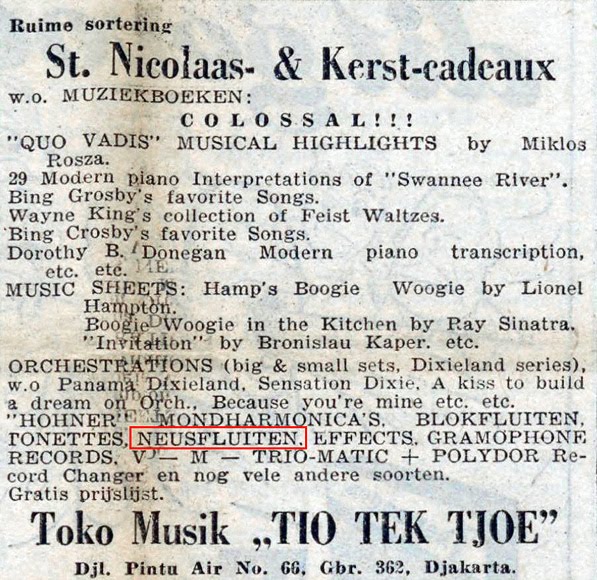 Sensei Mosurin, the master player and only specifically nose flute professional player in the world, has just released a series of 5 new videos recorded at the YaYa Bar, in Ebisu (Shibuya, Tōkyō, Japan). Any of them is a pearl of pure sound. You can watch (and listen to!) them on Mosurin Youtube channel.

Here is one of them, The Tennessee Waltz: