Great and innovative musician, Roland Kirk (Aug.7, 1935 - Dec.5, 1977) pioneered many jazz techniques, like circular breathing, playing up to three saxophones at once, simultaneously playing the flute and singing... He is also famous for his nosefluting, as we can read in many records captions.

But as you know, there is a huge difference between playing a nose flute and blowing a flute with the nose. So far, I haven't found any picture of Roland Kirk with a Humanatone, and more, I saw several pictures of Kirk playing a recorder applied on of his nostrils, while regularly blowing a transverse flute. Something quite impressive, but not related to the little urban instrument which is the topic of this blog.

So, reading things like « Beyond being a fine (traditional) flute player, Rahsaan was the undisputed king of the nose flute » was annoying me a little. 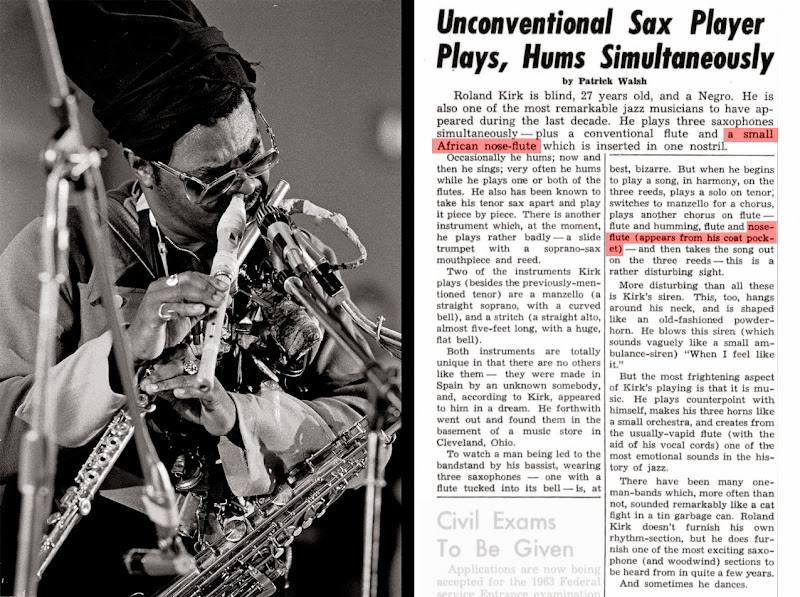 But sometimes, in the forums or in the magazines, a "nose whistle" was mentioned. And you cannot mix a flute up with a whistle. I found this article of the Muhlenberg Weekly (Sept. 27, 1962), saying "nose flute (appears from his coat pocket)". Nobody can hide a recorder in a coat pocket, but a Humanatone, yes. However, the headline of the article was mentioning a "small African nose flute". So, what to think?

I spent hours listening to Roland Kirk recordings, trying to discern a nose flute between other flutes, saxes, drums, ... Then I received the light!! an urban nose flute needs the nose and the mouth to be played, and nobody could play a Humanatone while playing another wind instrument. So, if there was urban nose flute in Kirk's recordings, it should be easily audible, and monotonal.

Indeed, I finally found 3 tunes with nose flute, and there are certainly many more in Kirk's works. And as expected, these occurences are very short (because Roland Kirk had to leave all his other instruments to play some notes, no fun...). They are used for a kind of rythmic signal, but they are bi-tonal, as if Kirk played 2 nose flutes at the same time: in this case, they must have been those small African nose flutes (pipe shaped and fingered) mentioned in the Muhlenberg Weekly, and not some urban and buccal pitched instrument. And why "nose" flute? Just because the audience laughs at those moments (and also because it's specified in the captions)

Here are the excerpts (sorry to cut these exceptional performances, but I had to, not to infringe copyrights):

Roland Kirk was one of the greatest jazz flautist, no doubt about that. Probably the most innovative. But did he play the urban nose flute? I really seeked for the answer to this question, and still found no evidence. If someone reading this blog had a picture or a recording proving Rahsaan Roland Kirk played a Humanatone or so, we would be glad to induct him to the Nose Flute Hall of Fame, but without, we can't.
Publié par UkeHeidi à l'adresse 10:44 AM 5 comments:

Email ThisBlogThis!Share to TwitterShare to FacebookShare to Pinterest
Libellés : controversies, sound samples, United States of A.

A series of new-old Humanatone ads.

I found new Humanatone advertisements dating of 1910 and 1911, all published in the Billboard.

The two first ones were published in the same issue, July 1910 (pages 16 and 115). The texts are indentical, but the layout and typo are a bit different (note the None genuine without trade-mark caption printed on the left border of the second one, that doesn't appear on the first ad.)

The other ones are more interesting. They were published in September 1911 (P. 109) and December 1911 (P. 83). Published in the Billboard, they are dedicated to professionals (music shops). First, they show the cool drawing of a concertist before a captivated audience, that we already saw on a user manual (check here). On those ad, the drawing has been redesigned (black tuxedo, more shadows on the stage, smaller but closer audience, etc.)

And more, the last one precises the gross price: $4.50, that is 3.125¢ per one piece! So cheap! And according to the September ad which tells a sample price fixed at 27¢, we can imagine the proportional huge benefit made by the retailer...

Email ThisBlogThis!Share to TwitterShare to FacebookShare to Pinterest
Libellés : ads, archives, drawings and paintings, Humanatone, prices, United States of A.

Mister Hiroshi Tachibana, aka tcbnhrs on Youtube, is primarily a Shakuhachi player, but had became a nose flute fan and experimenter. This Summer, Hiroshi went again on Mont Fuji to record videos.

Here is one - a Janis Joplin "Summertime" cover. About it, Mr. Tachibana wrote: I've copied the singing of Janis Joplin by effective use of portamento. I think, portamento is an excellent method that should be further utilized in the nose flute.

You can watch the two other videos here and here.

A New Simmy in the Collection!

Thanks to Piet Visser, famous whistle collector from the Netherlands, I had the opportunity to trade for a new Simmy. The first I got (also from Piet Visser) was dressed with soft colors: cream and pale blue. This new one is a bit more punk, with a milky pink dress and a flashy yellow apron!

We still know nothing about Simmy. We suppose it is German, from the 1950s, because its details appear very similar to the Weidlich and Lohse (Schwan). Simmy looks less "finalized" than the Schwan, but W&L's patent show the Schwan, which shape comes directly from the Brunndöbra Nasenflöten... So, Simmy should logically be later that the 1955 Schwan...
But... all the Simmies we know were found in the Netherlands, and they may have been found as gift in washing powder packs. 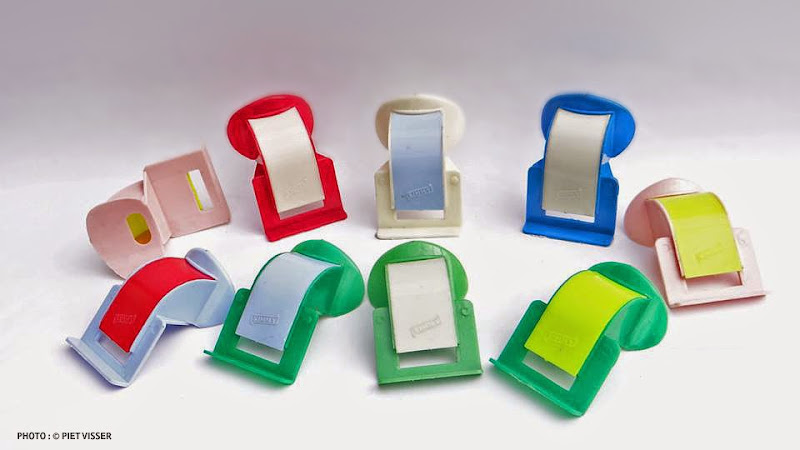 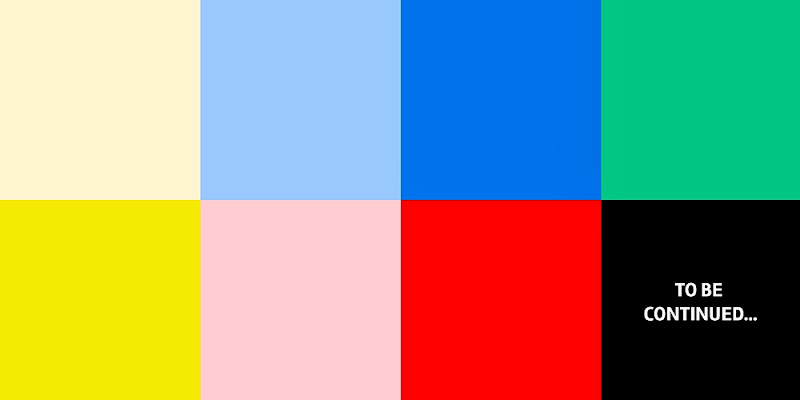 And the flimsy logo:

A new tool is currently beta-tested at Google: Ngram Viewer. Drawing from the huge book database Google has scanned, the Ngram service is able to chart the occurrences of a word or expression between the two dates you have specified. More, it is able to compare several words, and offers many parameters to be set. Of course, I tried with "nose flute". 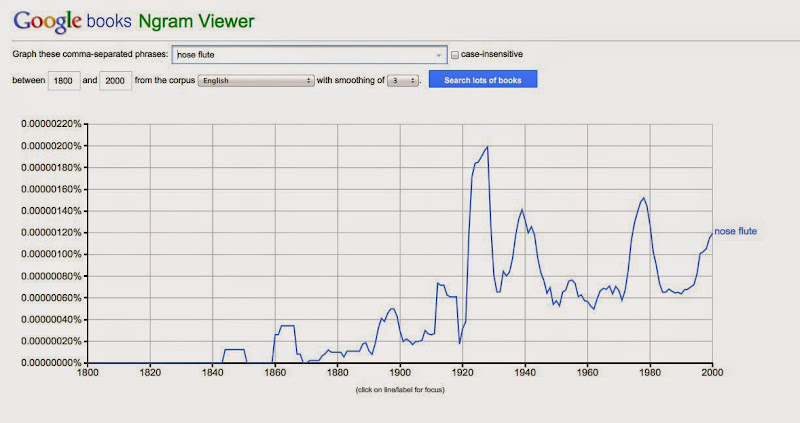 By default, the tool proposes a "smoothing" (of the curve) of 3, which helps to profile the trends. On the nose flute Ngram, we can see a global increase of the occurences, with some peaks. Of course, the graphic includes the many native nose flutes that we can't substract easily from the results. However, the peaks stay significant.

On the left chart (1900-1950), the ±1915 peak corresponds to some revival in the interest in native flutes, as for the ±1940 one. But the central one, around the years 1925 is well fed by the numerous advertisements for the Humanatone and the Magic Nose Flute.

On the right chart (1950-2000), there is a remarkable peak around 1977. I checked the books of this period, to understand what happened. The explanation wears a name : Roland Kirk, who died in 1977 at the top of his art and glory. As you can see, the peak took off from earlier.

Now, another interesting feature is the comparison with other expressions. I tried with nose flute, kazoo and slide whistle. They were invented in a 60 years timeframe: kazoo (1852), Nose flute (1892), Slide whistle (1910). Until 1940, the kazoo occurences graphic stays under the nose flute line, but then after, it blasts and reaches the sky! Why didn't nose flutes get such a success? 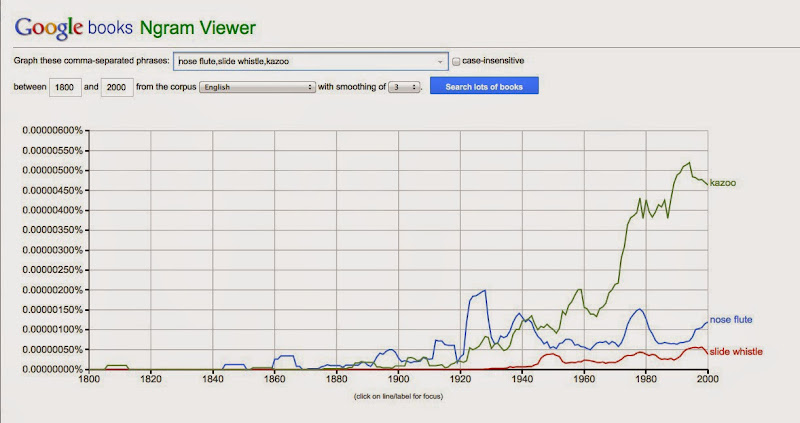