This time, no hesitation, it is a Jew's harp and other funny gizmos on the desk: 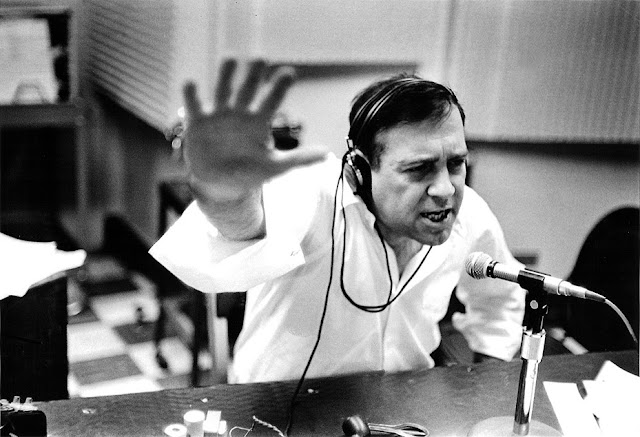 This is probably the funniest part of this series of posts: Jean Shepherd playing along real commercials. And very often, his playing sounds like a comment turning the message into derision. How could the advertisers have accepted that? Incredible. Well, this funny practice stopped in 1966. The main targets were cigarettes and beers, but there were a few other victims.

What's laying on the papers? is it a Jew's harp, a Humanatone or something else?: 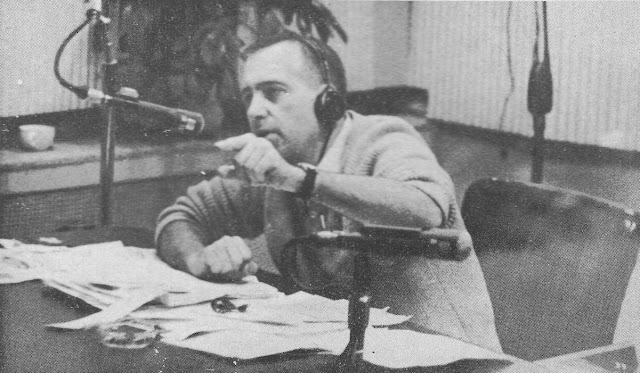 What I mean by 'Compositions' are kind of improvisations Jean Shepherd generally played on several instruments (playing along over his own recordings, sometimes re-using the same). Most of the time, you can recognize percussions, kazoo, nose flute...

Those musical experiments are very interesting, even though Jean Shepherd didn't hesitate to play them again and again. At the beginning, I wondered what was the very sharp instrument Shep used for the melody: was it a tin whistle? No, there were slidings... Was it a syringe flute? No, too fast and too precise. Then I understood it was a nose flute. A pre-recorded nose flute that was accelerated! (I made a test slowing and pitching it down, and I confirmed the nose flute). Then Jean Shepherd either played along live nose flute on it, or even read the commercials...

Jean Shepherd and the Nose Flute - Part I

On Wikipedia, on Jean Shepherd's page, it is written:

« On some of his broadcasts he played parts of recordings of such novelty songs as "The Bear Missed the Train" (a parody of the Yiddish ballad "Bei Mir Bist Du Schoen") and "The Sheik of Araby". Sometimes Shepherd would accompany the recordings by playing the Jew's harp, nose flute, or kazoo, and occasionally even by thumping his knuckles on his head. »

I already posted about the famous radio storyteller Jean Shepherd (see here), but I wanted to go further. I'm not going to deal with his life and career (better check the numerous pages about him), but to focus, as you can imagine, on the nose flute side of his work. Many of his programs were available on the Net, but I was a bit reluctant before the mountain to be climbed... 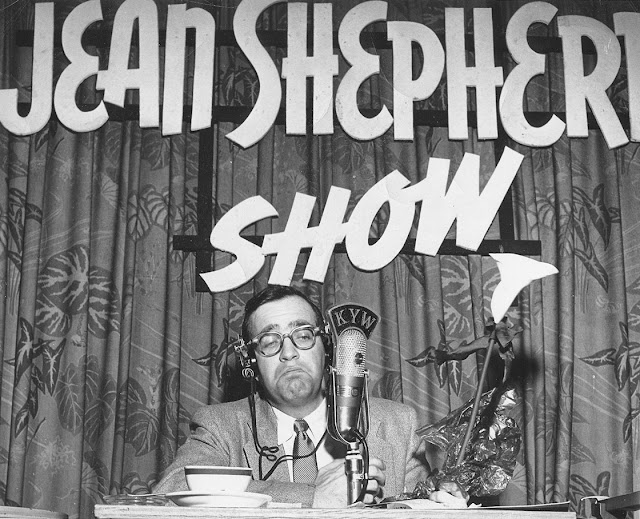 But we did it, I sacrificed myself for you! I downloaded the 1,236 files I found (from Archive.org, OldTimeRadioDownloads.com, and FlickLives.com). Just take a look at Year 1972 on archive.org, and you will understand what it could be to check all programs available from 1959 to 1977. I wrote 'available', because FlickLives.com has done a census of 3,076 of them...

Most of the files I downloaded are 45' long (kind of 900 hours of broadcasting), and I couldn't spend such time in listening all of them. So I did the craziest job possible (I mean a job that really turns you mad, enters your dreams at night, etc.): I 'scanned' the 1,236 files. That is, I listened to a very short sound signal every 20 sec. It took me about 20 hours staying concentrated in order to detect any nose flute playing while clicking like a woodpecker (I calculated: some 120,000 clicks and some headaches:). Crazy work, but the crop is there!

For sure I have probably missed some short nose flute appearances... Yes. Is it a problem ? No. In the table I made, the figures are probably not exact, but I think they are correct relatively to each other: they draw a global picture. So, was Jean Shepherd a 'Jew's harp, nose flute, and kazoo' player ? 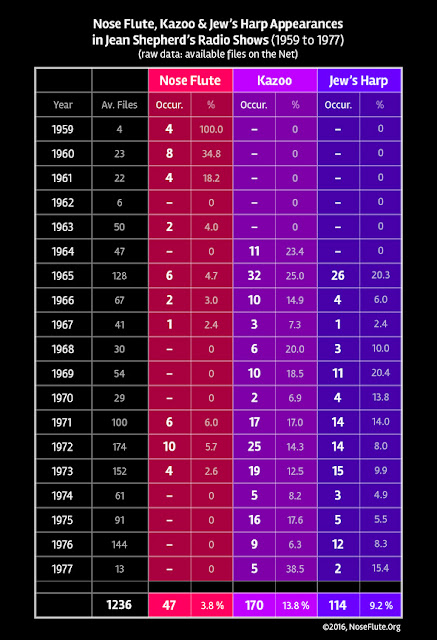 Anyway, I was able to sort the 'nose flute files' in several categories:

This is not the funniest category, but as you can hear, the last (1966) clip show the use of reverb. The first clip, from 1959, should really be the first one with nose flute, since Shep introduces it:

Playing along a record was an amusement that seems to have pleased a lot Jean Shepherd. Mostly Jazz (News Orleans, Jug bands, Ragtime...)…

…, and even a classical theme ('Bahn frei by Eduard Strauss, the Shepherd show theme) 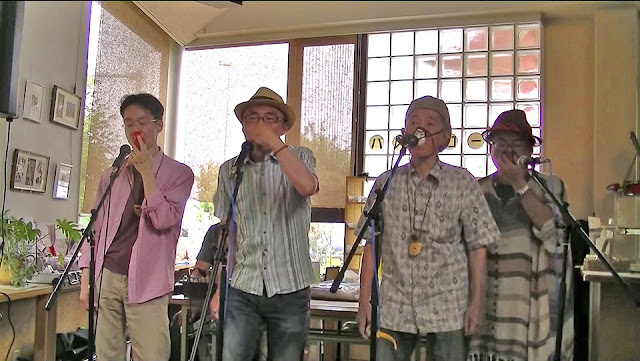 A nice video made by a joyful quartet at Tsurugashima Nose Flute Exhibition! The musicians are members of the "Nerima Nose Flute Friends" association ('日本鼻笛協会 練馬友の会'). Their YT channel is here.