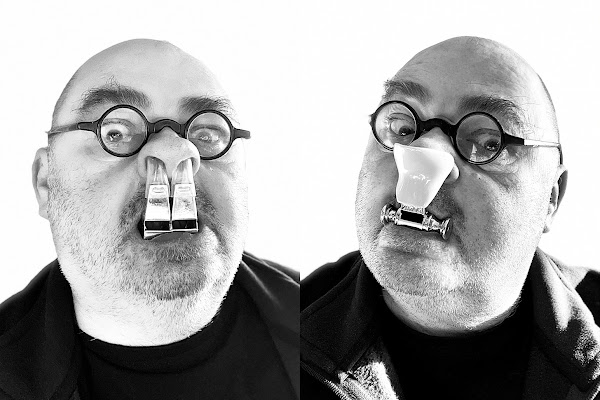 A pair of cheap referee whistles, welded together, bored, sanded and buffed, with silicone tubes as nose inserts. Not very ergonomic, but powerful (and so elegant when plugged in the nose!) 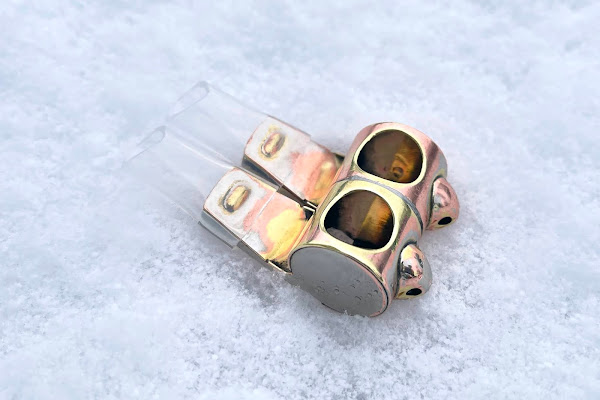 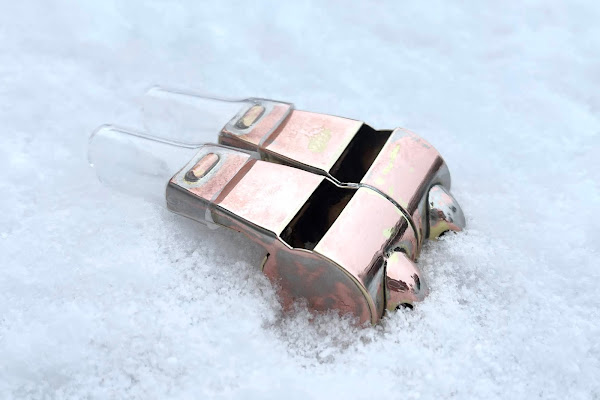 Email ThisBlogThis!Share to TwitterShare to FacebookShare to Pinterest
Libellés : Fix and build, hands-free, home made

Made with a Bocarina® nose hood and a Acme® Samba whistle, which belly was bored (1/2 inch). Needs a good air flow (as any whistle), but works fine! 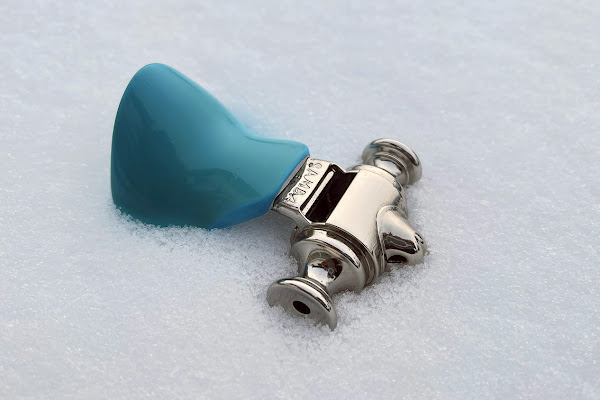 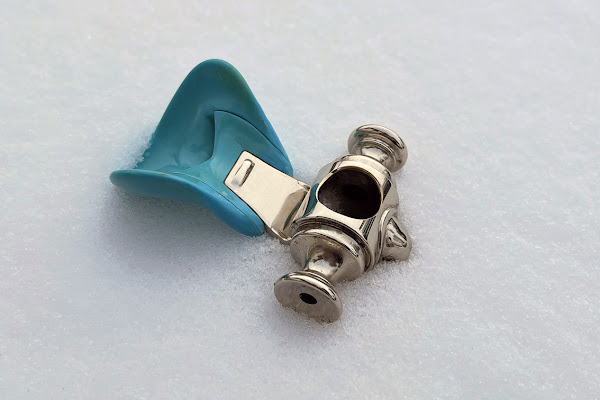 Email ThisBlogThis!Share to TwitterShare to FacebookShare to Pinterest
Libellés : Fix and build, home made

There's no doubt 2021 will easily be better than 2020. Noseflute.org addresses you and your relatives its best wishes for the New Year, health and happiness, for sure, and also many joyful nosefluting moments ! 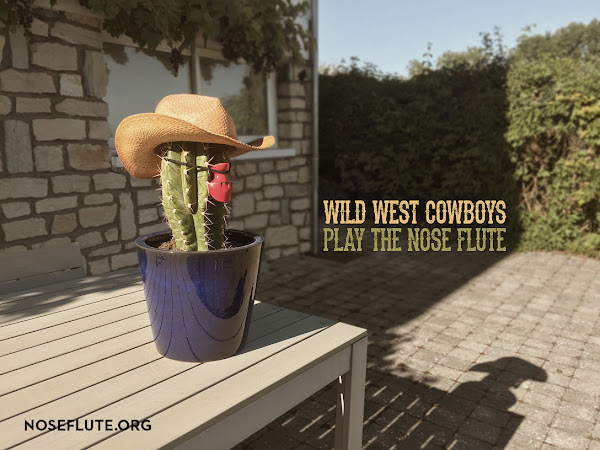 Email ThisBlogThis!Share to TwitterShare to FacebookShare to Pinterest
Libellés : events 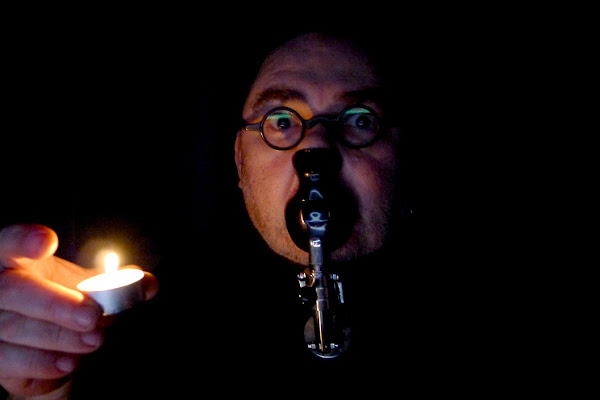 As we saw it earlier, whether the 1870's were the years for William Carter to settle in Albion, the 1880's were the time for comforting his position in the Albion society. But, besides his commitment in the Fire company, in the Odd Fellows lodge and also lightly in politics (Democrats), William Carter remains a modest tinsmith, employed at George Waterman store. On the other hand, William's brother – James – who started as simple tinsmith too, has reached success and fortune with his patents. There is no doubt that William tried to follow his brother's model...

How did William Carter get the idea of a nose flute ? This is a mystery, but we know that he was musician. Also, we discovered a news from the Musical World journal in 1890, about an alleged nose flute - the 'Nasi-flauto' – that was diffused all over the world, including in (at least 2) newspapers of the NY state. Actually, it was a kind of trumpet blown with the nose, but it is possible that Carter got aware of that and worked at the design of a 'real' nose flute.

The other question was "how a simple tinsmith managed to file a patent". Bill Carter may have asked advices to his brother, or totally acted by himself. Indeed, I found many (really a lot) of advertisements for agencies proposing their help to file patents. Here are some ads for Munn & Co., the company that William Carter hired for the Nasalette patent. The first (left) one dates of November 1888 and was published in The Progressive Youth: 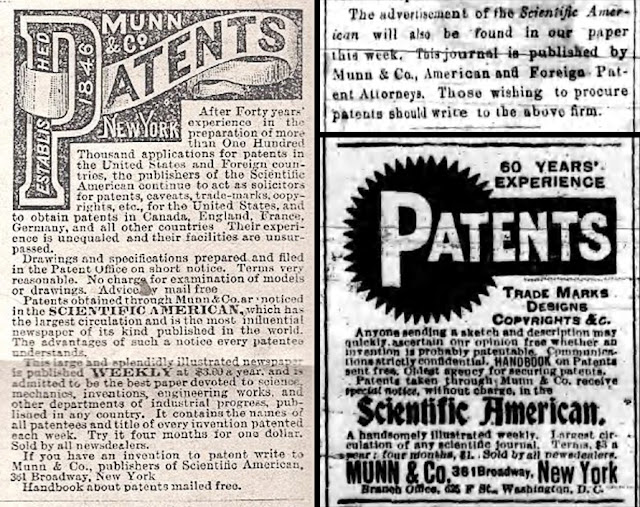 William Carter filed his patent on November 19, 1891 (it was registered June 14, 1892), and some of the names appearing on the document are familiar in Albion:

J.A. Bergstom was a journalist of the Scientific American magazine, and H. Munn was the attorney owner of the agency. I'm not sure about C. Sedwick, who might have been a NY judge.

Orleans Republican office. By courtesy of the Orleans County Department of History 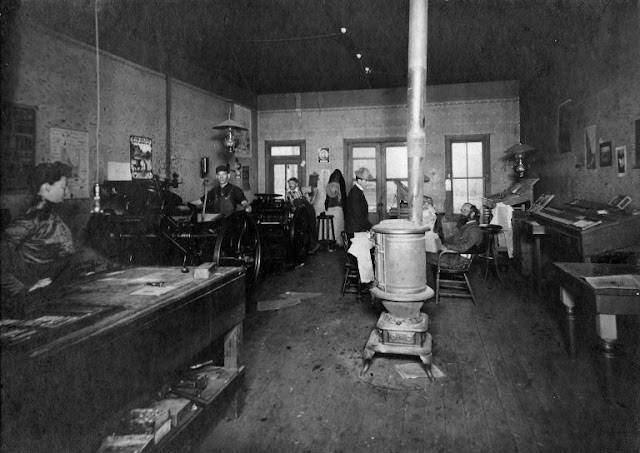 At the time of the patent, and according to Mr. Matt. Ballard, Bill Carter was living Park Street.
« One of the directories I have shows William living at 28 W. Park Street, I presume before he married Lizzie. » This address should concur with the district numbered D4-P-3:

This address – which is the other place where Carter may have invented the nose flute, besides the Waterman store where he worked – is interesting. Indeed, it was located at the current place of St Joseph (catholic) church and parish. The church was built in 1896, but before that, in 1890, it was the private property of Mrs. Clara Stafford. Mr. Ballard wrote an article which retraces the history of this parcel, and in which we can read that it was including « [a] brick dwelling house, [a] brick barn, and [a]brick tenant house». This last "tenant house" is certainly where Carter was living. 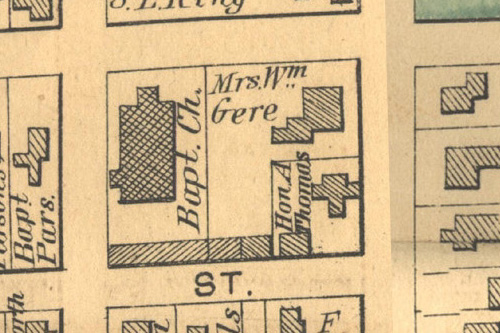 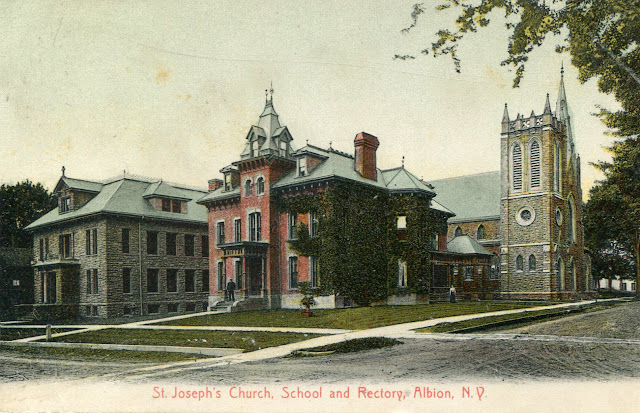 So, did William Carter design the Nasalette at home or at work? Probably both. Drawings at home, maybe also some tests (he had been "tinsmisth at home" so he should still have had some tools with him. But also likely at Waterman store, at his workshop, after the work or during some free time. Anyway, both buildings do not exist anymore.

The patent is registered on June 14, 1892, and several newspapers mention it. 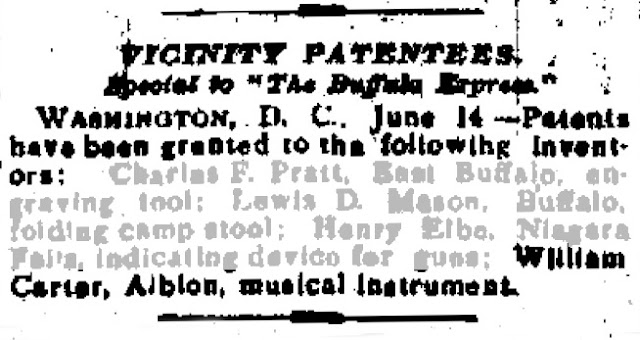 William Carter sold his patent (we'll get the evidence later, in 1901, at the occasion of the Pan-Am exposition – see below). When was that and who bought it ? On the last question, there is no certainty, but it should be Garrett John Couchois, the wealthy piano dealer, music composer and publisher. And since a nose flute called "Humanatone" was present at 1893 Columbus World's fair, the patent should have been sold in second half of 1892, or at maximum very early 1893 (the time to be registered, but also the time to get nose flutes manufactured for the Fair).
The amount of the deal is not excatly known. It was "a good sum, but not $2,000" (see below, point 3.)

Elizabeth was born around 1862 (she's 16 years younger than William) [check here], and she's milliner. In 1890 she bought her first millinery shop, in association with Ms. Krank.

The shop is located East Bank st., upstairs, "over the old post office". It will remain there until August 1899.

In 1898, William and Elizabeth have a second child, Mary Louise, born on 21st of July, and in 1900, another daughter, Mabel Elizabeth, born on the 1st of June.

In 1899 Lizzie installed her workshop at 53-55 North Main street, in the Day Block, over Landauer & Strouse store, and it is likely that this building was also the Carter's home (we are at least sure, thanks to the census sheet, that they live in North Main street (check here)). The building is almost facing Geo. Waterman's store, on the other side of the street. 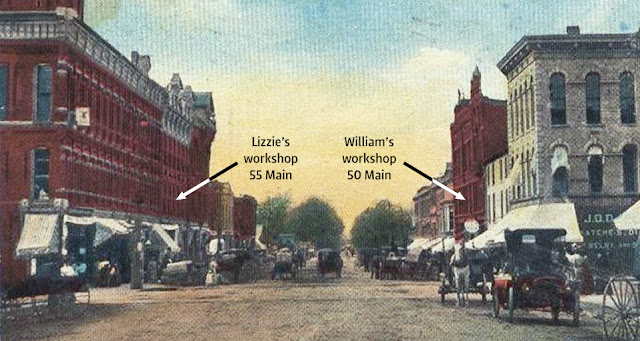 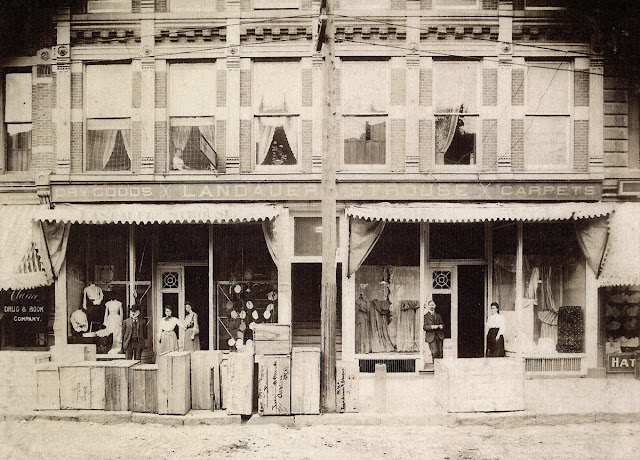 We don't know when this photo was taken... but there is a child at the 2nd floor window. Could it be a young Carter?: 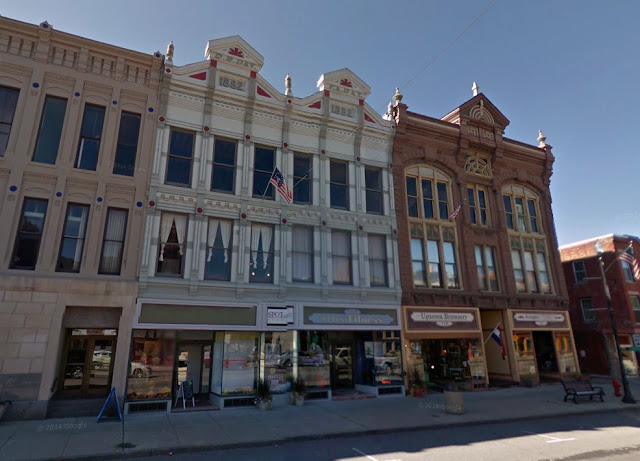 1901 is the year of a huge firemen convention in Albion, gathering 10,000 men in uniform. For sure, the Albion Hook and Ladder company took part in the event.

The Parade, seen from Bank st. The photographer should have been in between the Orleans Hotel and the Village Hall: 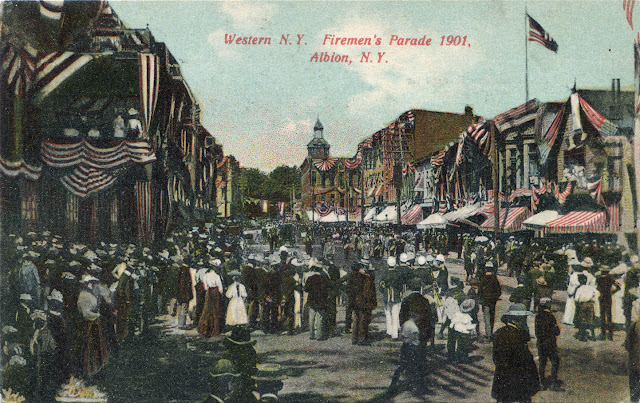 While the "Humanatone" (the rebranded Carter's Nasalette) was launched in Chicago World's fair in 1893, it seems it made a big hit at 1901 Buffalo Pan Am exposition. Was Couchois the patent holder who had a booth at the Pan Am expo ? Anyway, the nose flute was sold by thousands! As we saw earlier, Carter might have sold his patent for about $2,000.

Notice that the instrument is called a "flute whistle". And a week later:

40,000! That's a great success for a new small instrument towards which some people still stay reluctant nowadays. Also, it is very surprising that 9 years after Carter sold his patent, the newspapers still argue about the amount (FYI, the "Lance" was The Albion Free Lance, another newspaper)

The Pan Am Fair was the place of assassination of the president McKinley, on the 6th of September. But besides this drama, a small incident happened in November, at the Fair closing day. A crowd rushed down in the Midway alley and made some damages: 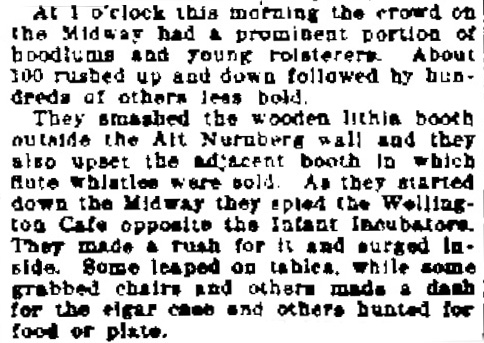 So, the nose flute booth was adjacent to a Lithia seller, outside "Alt Nürnberg" wall. As any american world's fairs, the Buffalo exposition had a "Midway" alley, with very popular shops and attractions, besides the official majestuous palaces, halls and buildings.

Bird's eye view: the Midway is in the top-left corner: 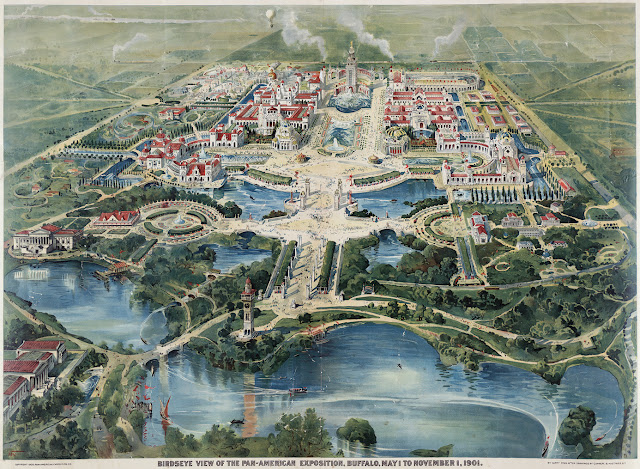 Lithia were mineral water, supposed to cure many diseases and troubles. There were many brands, notably the Buffalo Lithia Water. 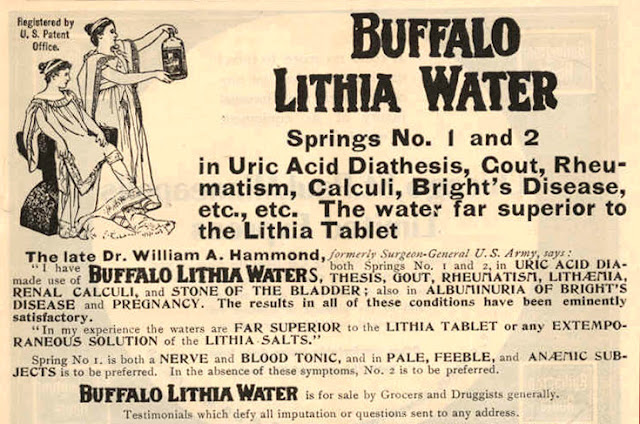 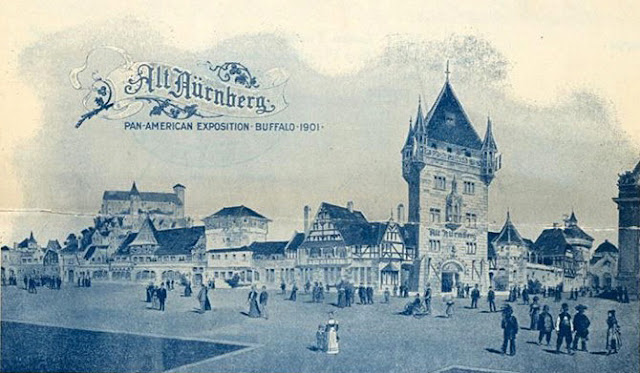 Here is a picture of Alt Nürnberg entrance door. On the right side, we can see two wooden booths. One is covered with advertisement posters and is undoubtedly the lithia booth. So, the other one, touching the Nürnberg wall, is the nose flute stand! 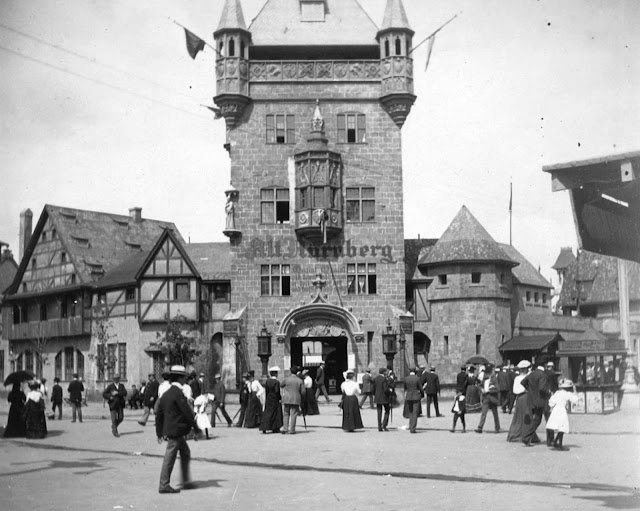 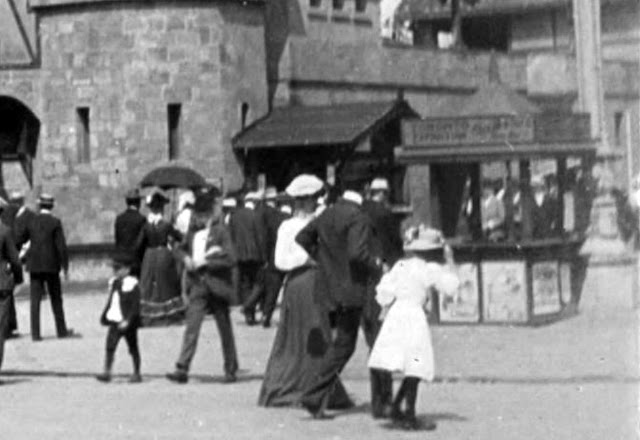 Unfortunately, there are many people in front of it, and the picture definition does not offer to distinguish more details...

In 1903, William Carter has filed another patent. He would not earn more money with the Nasalette/Humanatone, and still following his brother's track, worked on a 'more serious and useful' device, a heater to be attached to stove pipes. I didn't find the patent record, and it is probable that it never got registered by the Patent office. However Carter had the radiators built by the Bromley Foundry Co. (Albion) and sold them during many years. We also learn that the radiator was endorsed by the clergy! 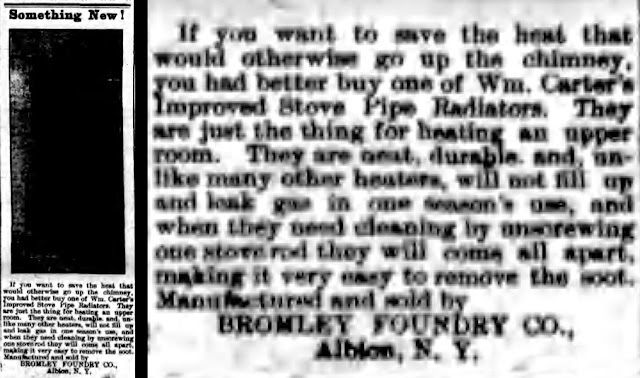 The 1906 paper clip teaches us that the radiators are sold by William Carter at the 55 Main st., over Landauer & Strouse store, on the same floor as Lizzie millinery. Indeed, william does not work for Geo. Waterman anymore, and is back a "tinsmith at home", as the 1905 census noted:

Lizzie is reported as a milliner "at home", but contrarywise to William who has the status "O.A." ('own activity'), she is noted as an employee ('Emp'). This is a bit bit weird. In 1903, Lizzie was looking for an apprentice. There is also a verse of a poem – The Brownie's visit to Albion – dedicated to her shop.

In fact, in 1906, Lizzie Carter sold part of her interests to Ms. Kirby (a friend of her at St Joseph parish, where Lizzie is 1st Vice-president of LCBA). Lizzie is probably preparing the Carters move from Albion to Rochester (in 1909), and is now the employee of her future successor. Indeed, the new worshop is named Kirby and Carter (not the inverse). 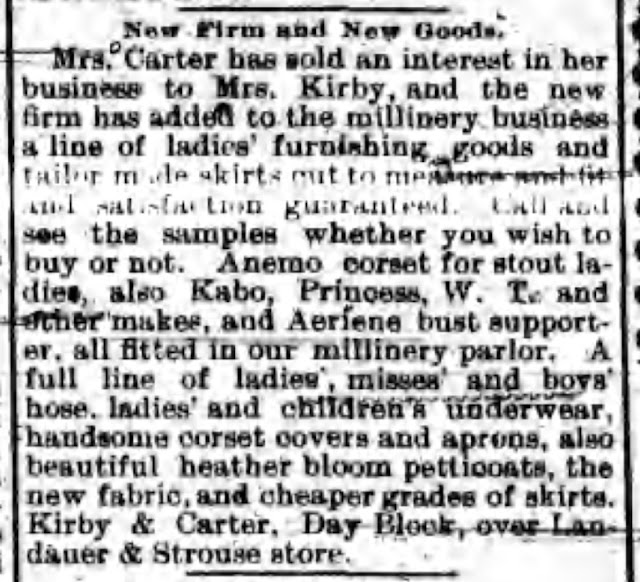 An newspaper article is published in 1906, remembering the "old days" of the Hook and Ladder company, in which William is mentioned. He is 60 years old now, and had given his 1st assistant place to younger firemen. But he's still member of the YAH&L Co., and is elected fire warden in 1907. The same year, he's recalled at a banquet, for his evolutions on the ladders! 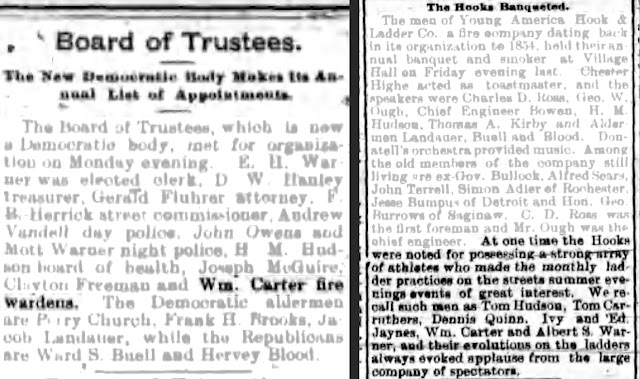 Less than a week after the banquet, his brother James passed away:

In August, an interesting series of concerts is given in Albion and neighbourhood, by the Sunny South Minstrels, among which William's son Adelbert (12 y.o.) played/sung a little scene called "School Days", then concluded the show with ... a flute solo! Was this a nose flute solo ? 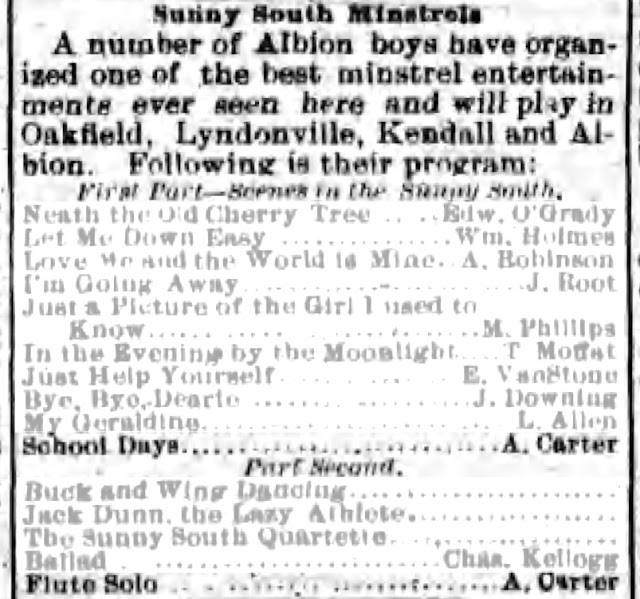 The Carters left Albion for Rochester in 1909 (their story there has been published here).

However, William and Lizzie came back regularly to Albion, visiting (Lizzie's) relatives, friends or the annual county fair:

Albion county fair, around 1910. By courtesy of the Orleans County Department of History 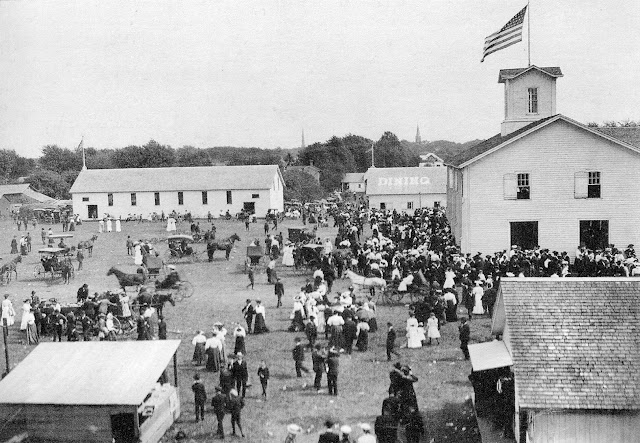