A video by Shoko Mihira 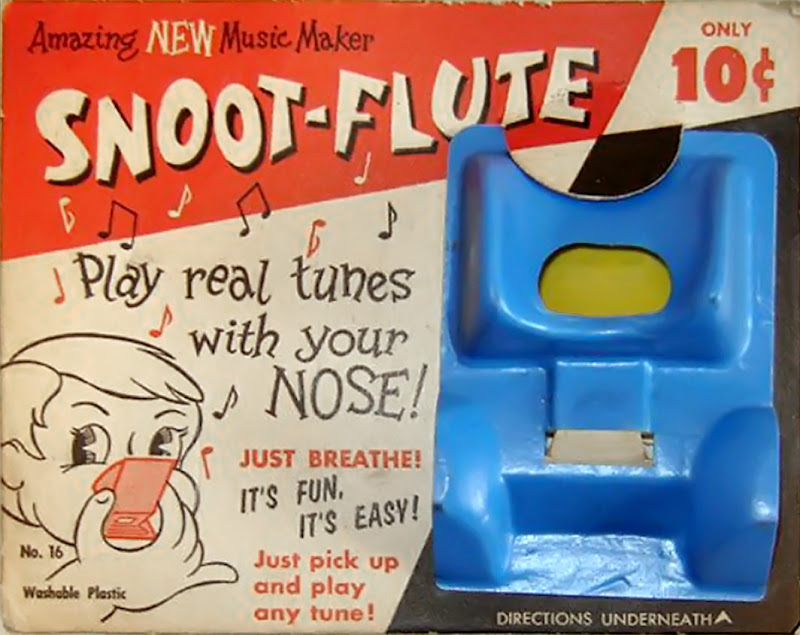 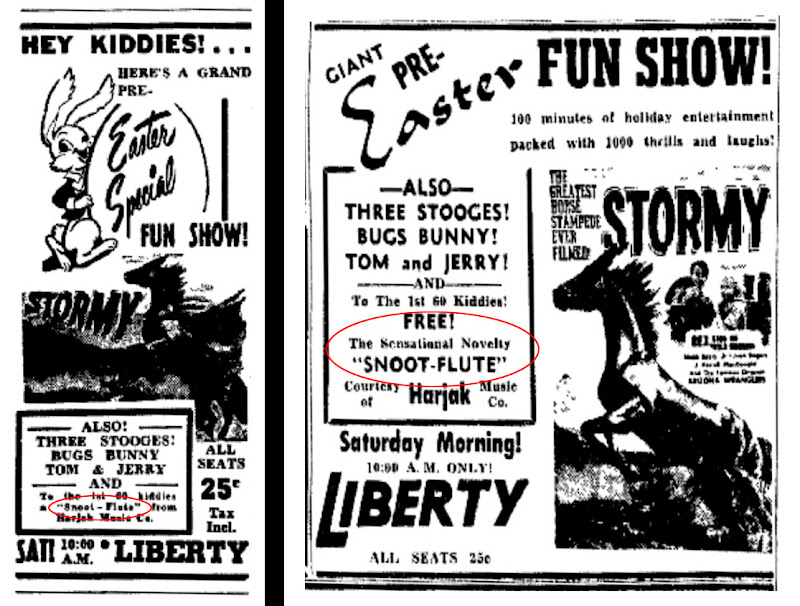 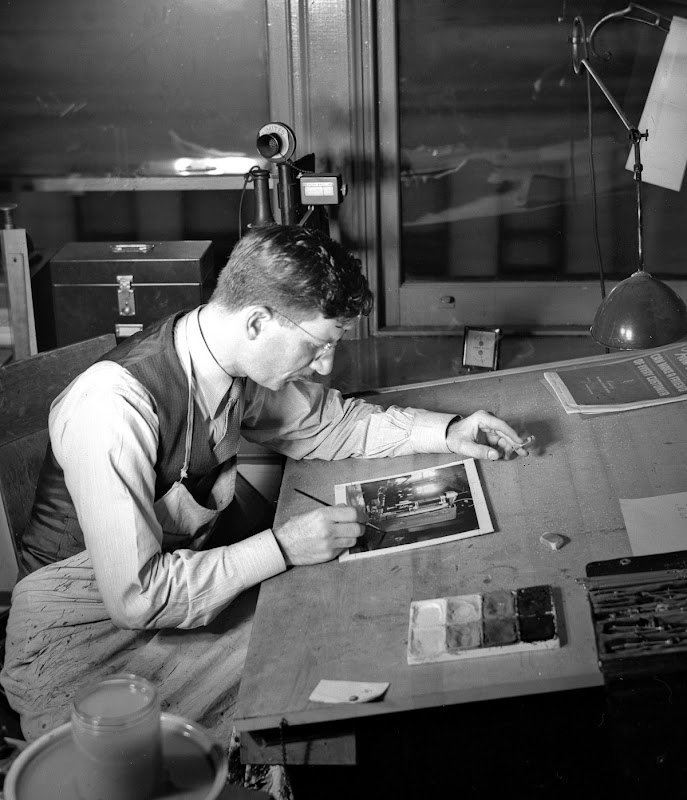 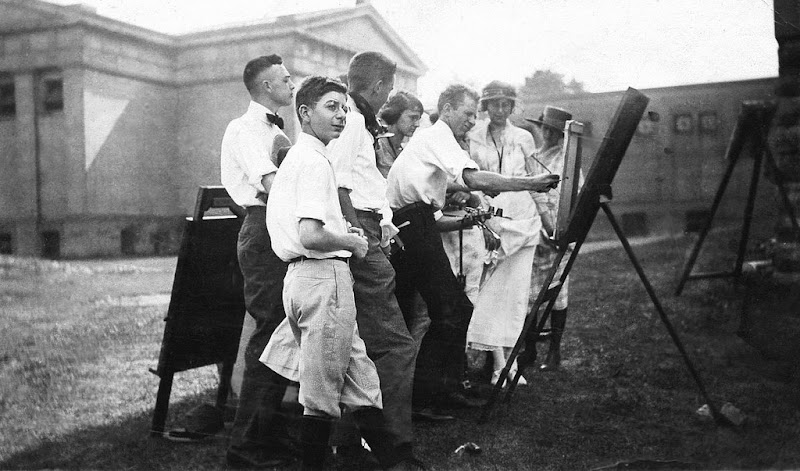 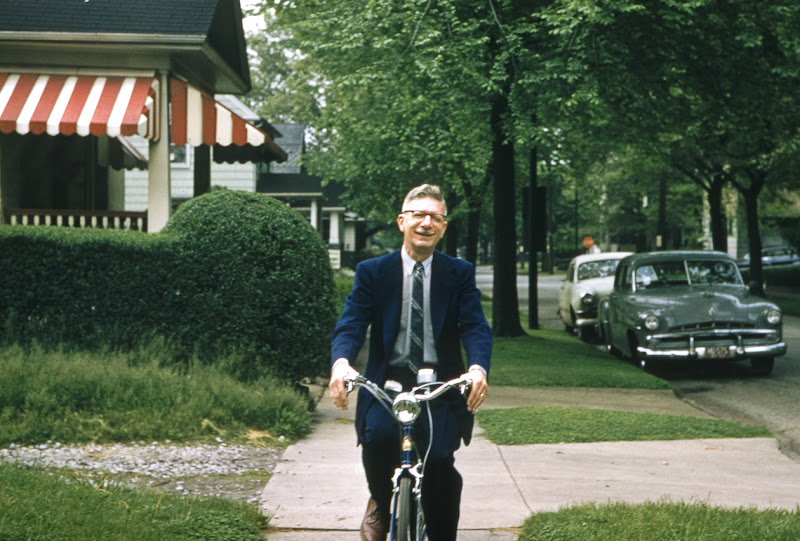 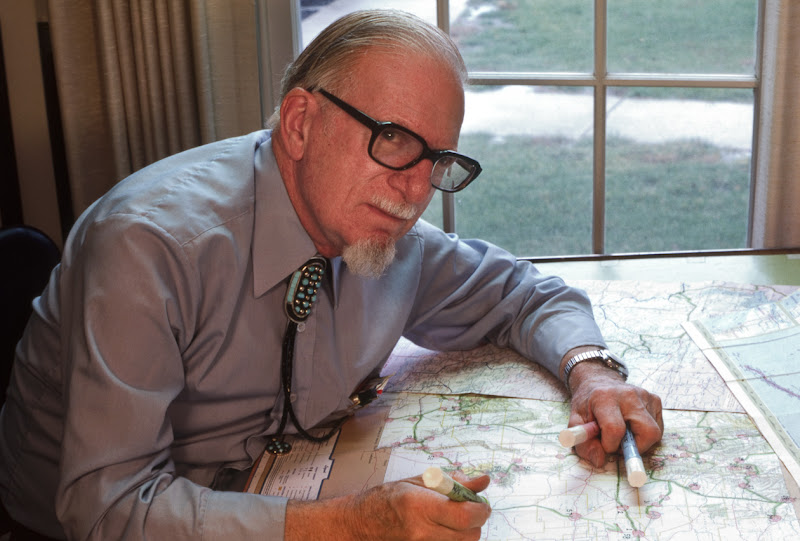 A live performance by our friend Floyd Blue (floydbluethereal) at Bischofsplatz in Mainz (DE), with the AllesUke-Orchestra. Only the first song, Bull Doze Blues was played with the Nasenflöte.

Patents give no more info that what we published in Part I, but fortunately, local newspapers and census sheets do.

What stood for the "W", in "Ernest W. Davis" ? William? Walter? Wayne? Wilbur?
There is one and only place where I found it : the Town Records book of the city of Boston, MA. So, Ernest Winfield Davis was born in Boston, on March 19, 1881.

The next year, Ernest was born, and in August 1883, it's the turn of the young Alice.
The Davis family moved later to Chicago, and the occupation of Luther will become "Engineer Stationary".

We know, from the patents, that Ernest lived in Forest River and Oak Park, Cook district, in West neighborhood of Chicago.

The two first "Ernest W. Davis" of Oak Park/Forest River entries I found date from 1895 - Ernest is already 14 - and deals with Tilton School graduation. The first one teach us that he interpreted Douglas Club Two Step (1894) by George Schleiffarth (1848-1921), as a commencement exercise. So, the boy was already musician and played the piano (according to the sheet music).
The second article tells that Davis has decided to continue his studies. 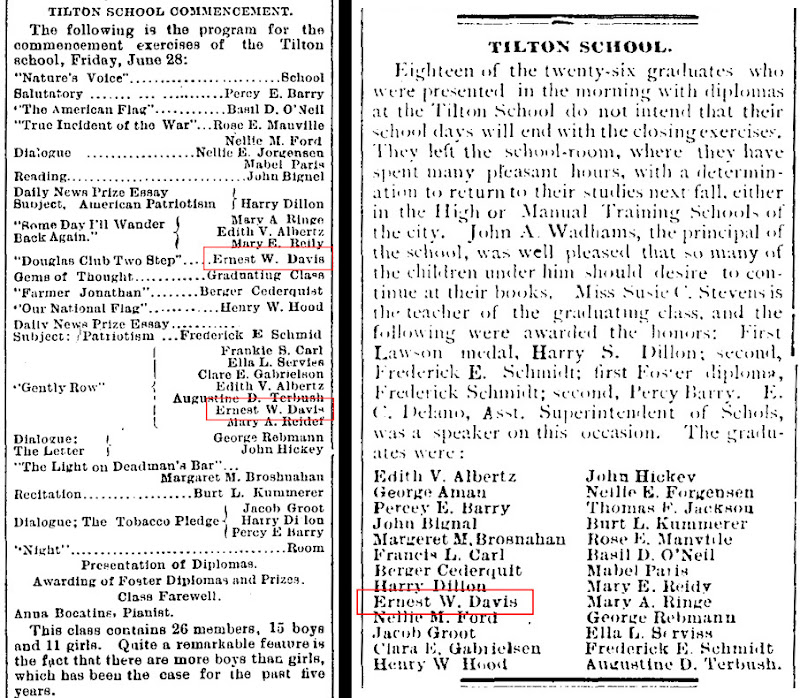 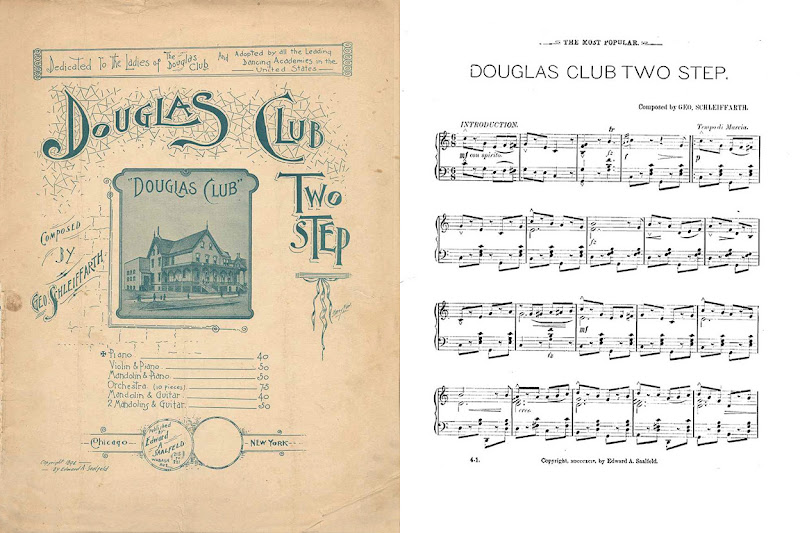 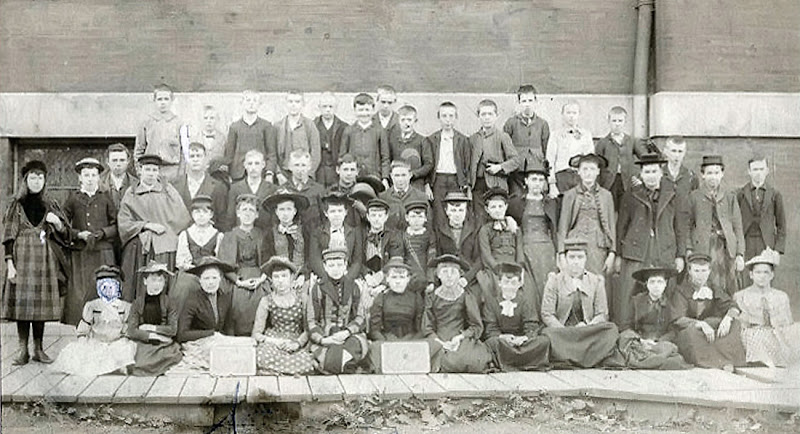 Then, no news from Ernest Winfield Davis until 1900. His older sister has disappeared from the census (married?). Ernest lives at his parents home in Chicago, with his youngest sister Alice, and work as a clerk.

In 1910, Ernest has become Head of the family, hosting his father Luther (64), who has become "Electric Engineer". What happened to the mother Ella B.? We know she's still living. But another name is written on the census sheet "Davis Mary C." as "mother"... Did the Davis parents divorce and Luther re-married with Mary? Probably.

The Davis live in Marion St., Oak Park (West of Chicago). They have a 7 years old daughter, Ruth Estelle, and they host Fred W. Ashler, Anita's father (certainly after his wife Ivana's death). 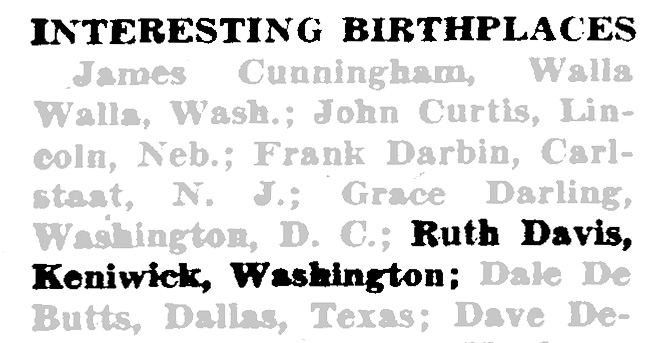 Ruth Estelle is a very good student, and besides the school, she's scout girl, member of Troop 12 and of the Citizen Troop of Oak Park district. It's a pleasure to notice she's fond of wind instruments (she plays the bugle) and physics :

Occasionally, Ernest W. is involved in his daughter scouting activities... as a singer : 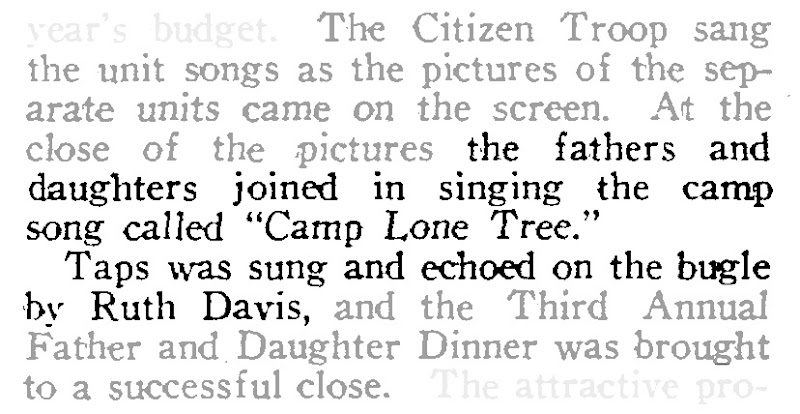 But when at university, Ruth Estelle is more interested in dancing and parties with her friends, notably a certain C. Byron (sometimes Barney) Flinn, whom name is always printed just besides hers (hehe!), and who'll become her husband after 1937 and before 1940, according to her name (Oak Leaves, Apr. 8 1937 and Aug 29, 1940). On Aug. 29, 1940, Ruth Flinn is invited to one of her High School friend : 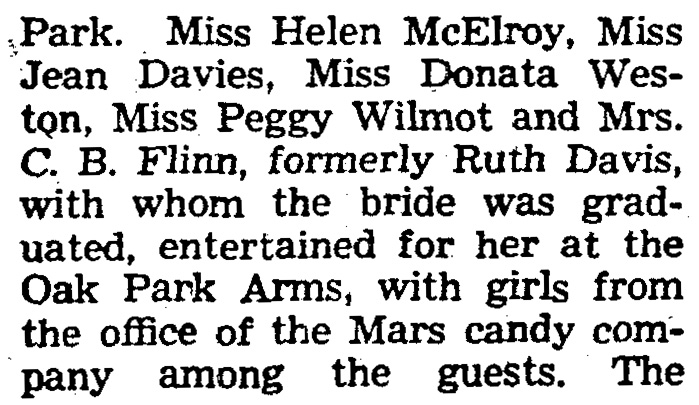 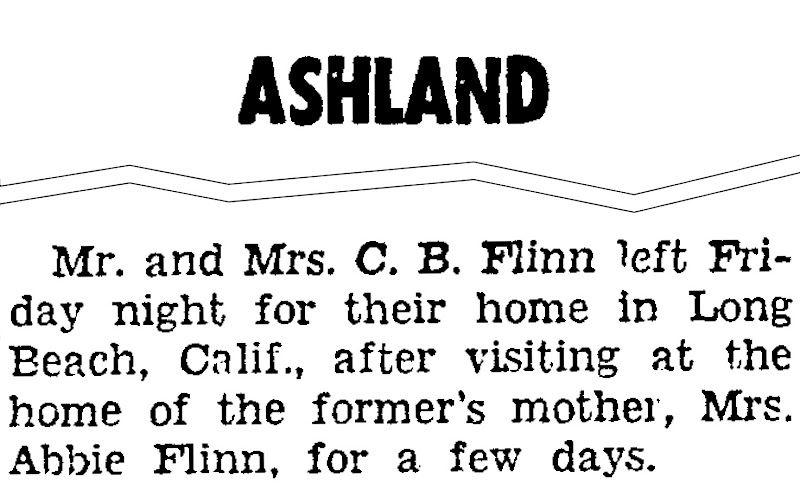 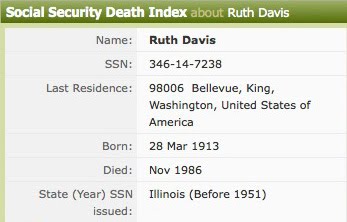 
In 1933, Ernest is 51, works for Stewart-Wagner, and has already applied for 63 patents... He regularly receives awards for his inventions. He is married with Hannah(Anita) C., who's member of a circle of Forest River Presbyterian church and of the Forest River Women's Club. We don't know much about Anita, but thanks to the "Social Affairs" chronicle of the Oak Leaves newspaper, we are aware of the Davis' holidays, hobbies and residential address... 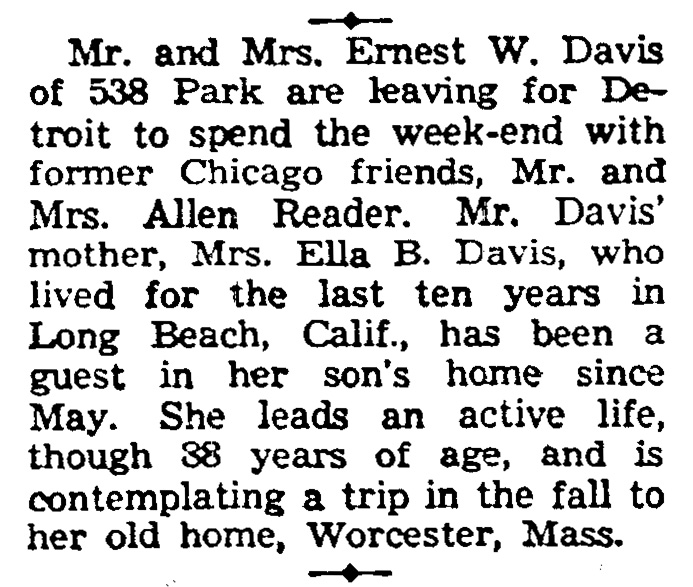 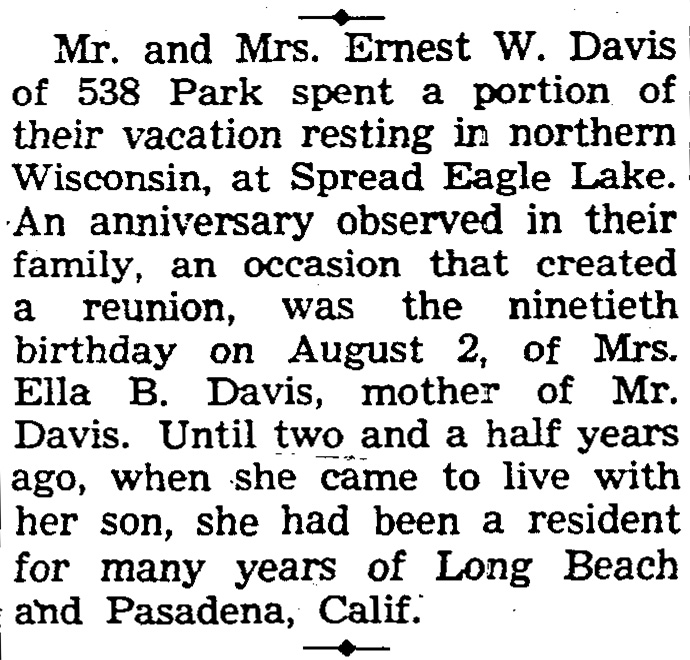 Indeed, as learned in this last newspaper article, Ella B. left Illinois in 1928 for California, where she lived 10 years, before to come back to Oak Park and live her last years at her son. She passed away on 14th of August 1944, at the age of 96. 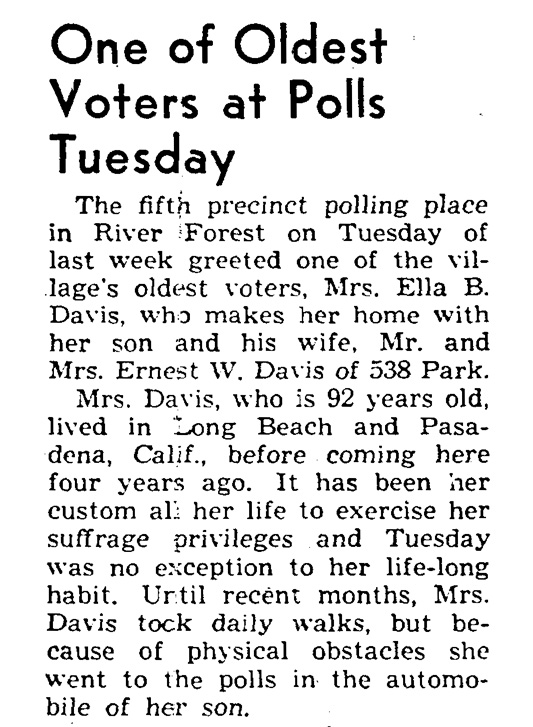 After his daughter's wedding and his mother's death, another event left Ernest W. totally alone : Anita's death, which happened on 24th of May, 1948 : 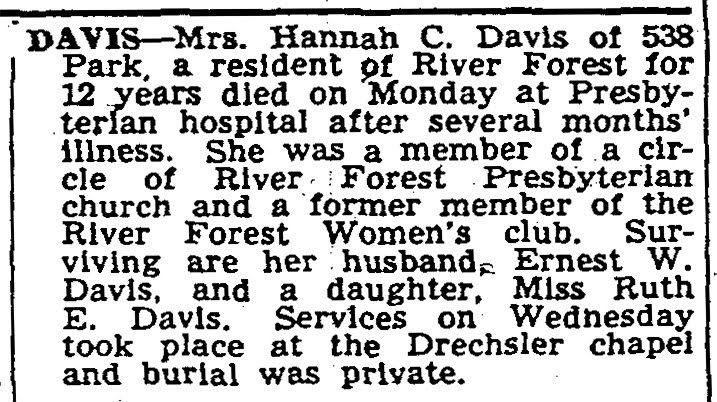 Daughter married and away, wife and mother dead, were probably the reasons which made Ernest W. move from his big house to a smaller one. Indeed, thanks to the very inquisitive newspapers, we can even precisely trace Ernest's homes, and we can notice he moved from Park Avenue to Washington after Anita's death.

I don't know when exactly Ernest retired, but it was probably around 1950, after his last patents were filed.

In november 1965, Ernest Winfield Davis passed away at the age of 84, after a life of work, rich of 132 patents, among which the plastic Humanatone one. 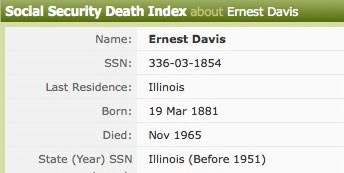 One last thing : in 1893, at the Columbus Chicago Fair, the first metal nose flute was presented. Ernest is 12 and (probably) lives already in Chicago. In the 1920s, several Jug Bands of Louisville came to play nose flute in Chicago. Ernest is in his thirties. He is musician, engineer... His first professional wishes were turned to entertainment. Is it so astonishing he drew the plastic Humanatone in 1939/40 ?

Ernest Winfield Davis is elected to The Nose Flute Hall of Fame !