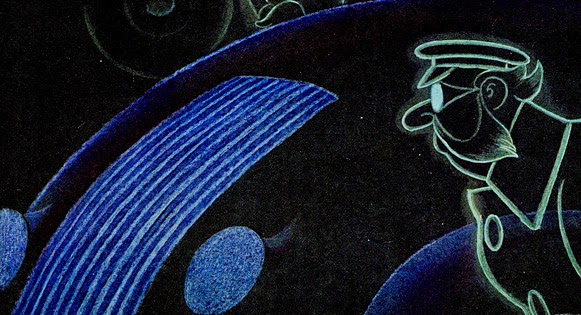 In the January 12, 1935 issue of the New Yorker magazine, a long article (PP44-49) (called "Onward and upward with the Arts - Life of the party" and signed by Robert M. Coates) was devoted to the glory of the Johnson Smith company, whose catalog of novelties the author had just been studying. The 1935 issue of the J.S. catalog should have been a ±560 pages book, proposing to send you thousands of items. The authors deals with a dozen of those novelties, among them the Magic Nose Flute: 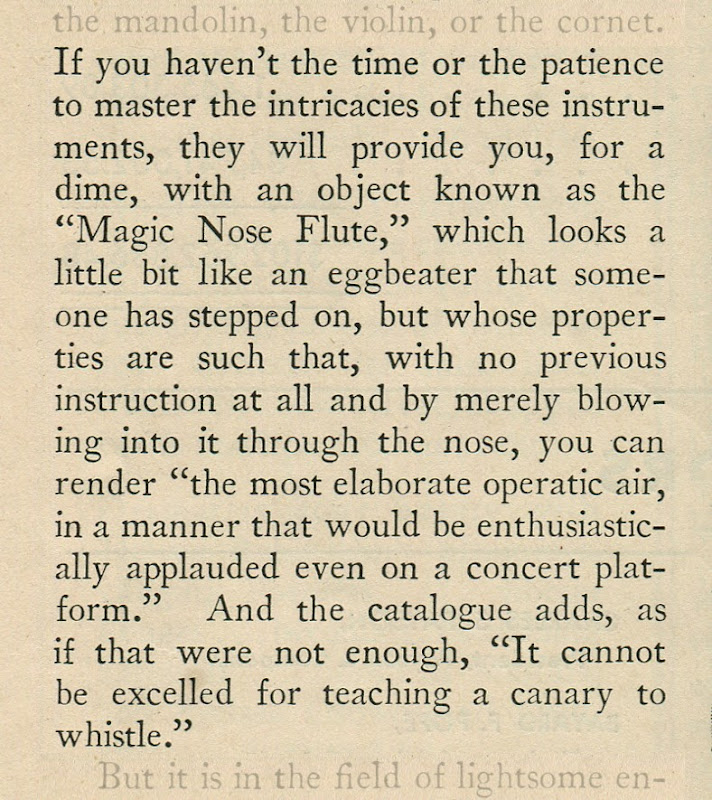 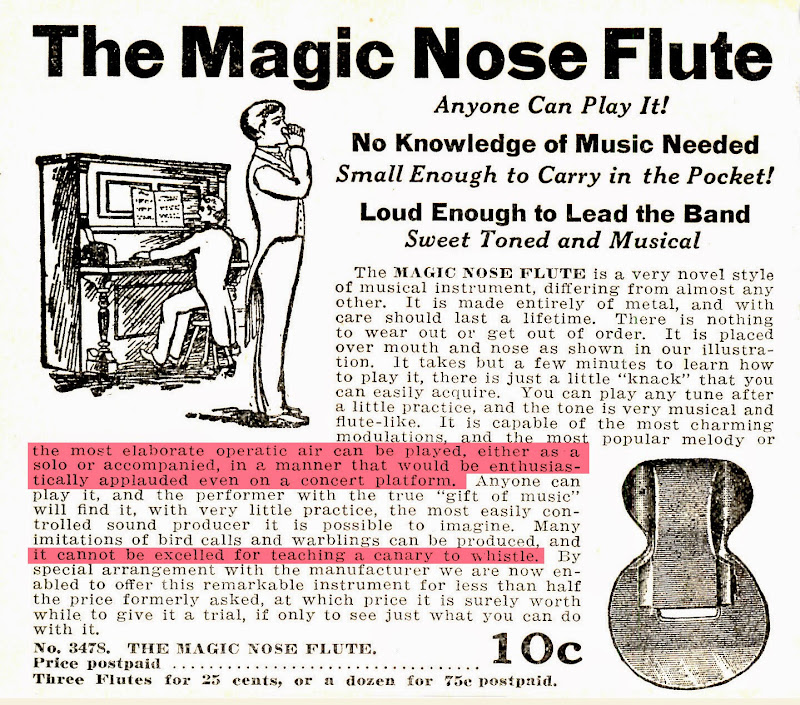 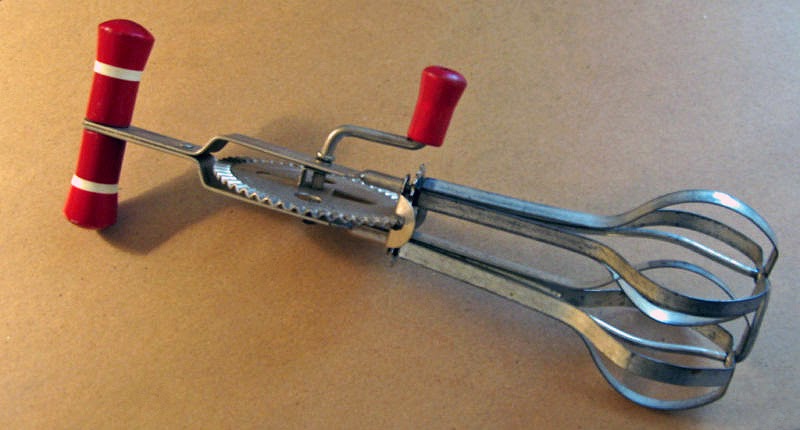 As far as we now, there has been 4 concertos composed for nose flute:

Concerto for Nose Flute and Muted Saxophone (1926?)
George Antheil (1900-1959), performed by Edmund Dulac (1882-1953)
George Antheil was a very famous composer in the Avant-Garde years. When in Paris, he was used to frequenting James Joyce, Ezra Pound, Man Ray, Erik Satie, Fernand Léger and many other. His most famous work is Ballet Mécanique. 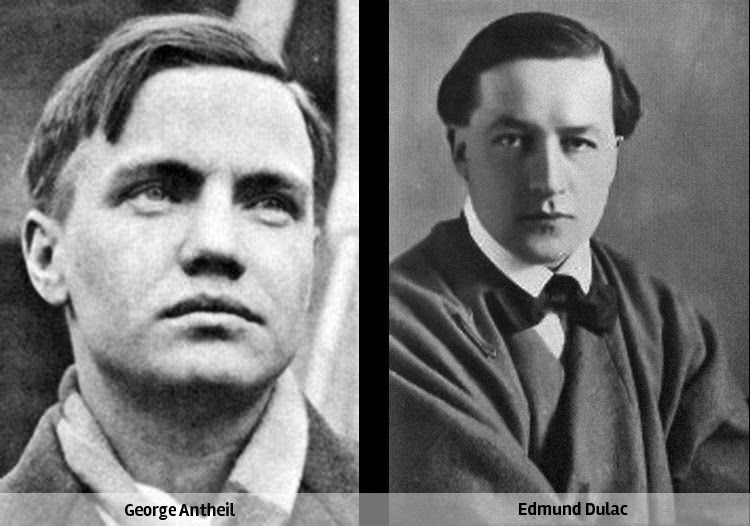 Edmund Dulac was a french (British naturalised in 1912) famous illustrator. Besides his orientalist drawing and paintings for books, he also created stamps, notably the ones with king George VI effigy or this great one to commemorate the Coronation of Queen Elizabeth II. But Edmund Dulac was also a nose flute player, who performed in many occasions. Unfortunately for us, it appeared quickly in our research that Mr. Dulac was used to playing traditional kinds of nose flutes, notably from Malay Archipelago.

In June 1926, Mr. Dulac performed the Concerto for Nose Flute and Muted Saxophone, composed by George Antheil. We didn't find the music sheet.

Gross Concerto for Divers Flutes (1961)
Peter Schickele (born in 1935), with the pseudonym P.D.Q. Bach
Peter Schickele is the famous American composer who invented the fictional and humorous character of P.D.Q. Bach, alleged last J.S. Bach's son. The whole P.D.Q.'s story has been published in 1976 by Schickele, in a hilarious book: The Definitive Biography of P.D.Q. Bach

In the book, the nose flute is said to appear in P.D.Q.'s musical life through Thomas "Peeping Tom" Pollex, a young nose flute virtuoso. Soon after, Bach's "only forgotten son" composed the Gross Concerto. 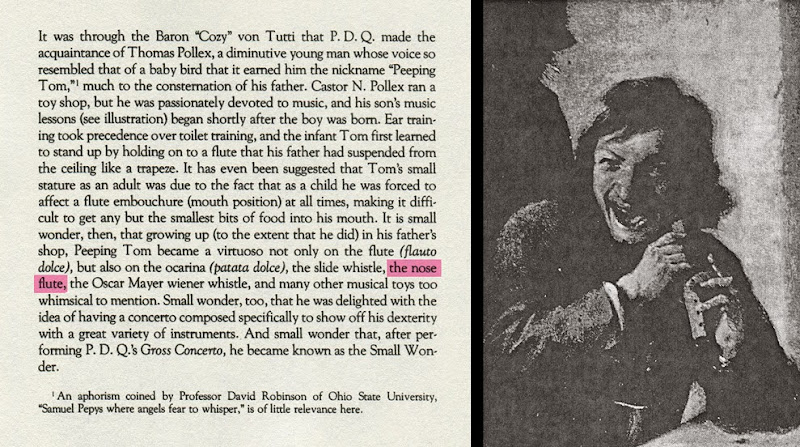 In the section dedicated to P.D.Q.'s works, a double page exposes the Gross Concerto history and the "divers flutes" used to perform it. And at the right bottom corner of the picture, we can see a plastic Humanatone. 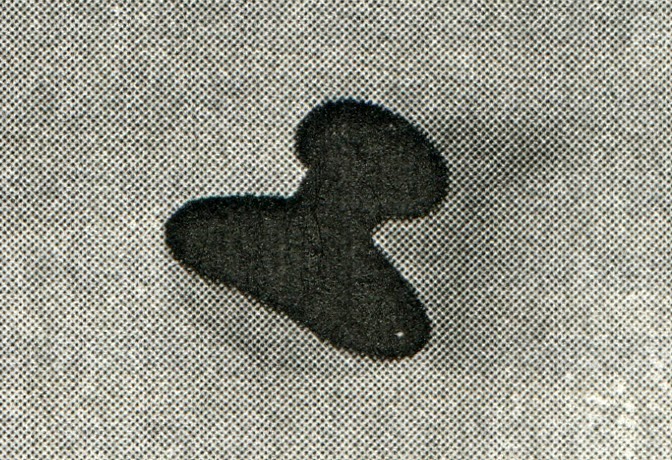 And in the book glossary, a small article describes the nose flute with a certain dose of humour:

But as usual in Peter Schickele's work, while P.D.Q. Bach's story is fictional, the Gross Concerto is real. It is a real concerto composed in 1961 and performed many times (and at least until 1993) by Schickele's ensemble, with the composer playing himself the "divers flutes". 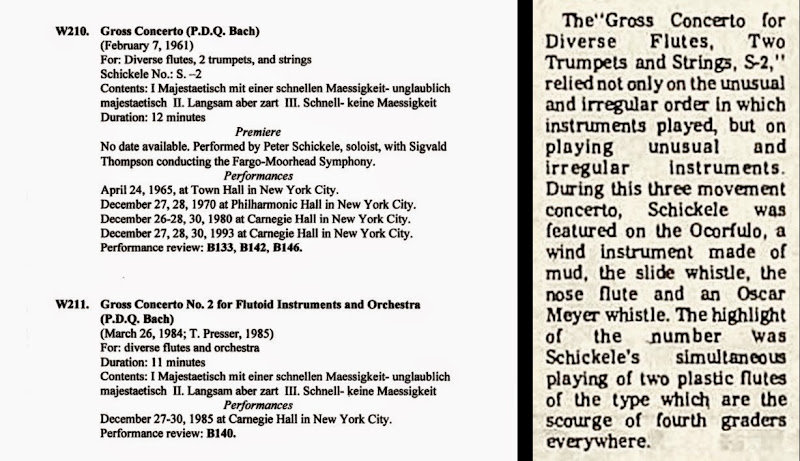 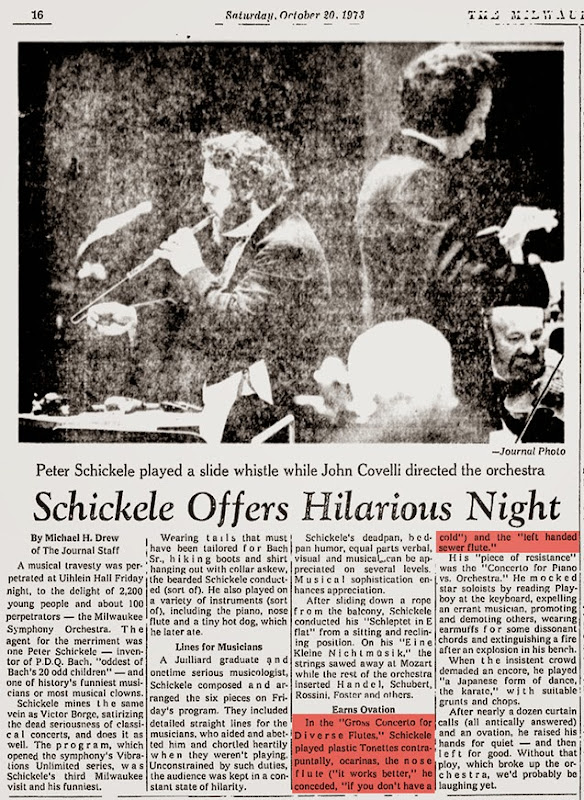 I have not been able to find a recording of one of those performances, nor a video. In the DVD The Abduction of Figaro (by P. Schickele), the bonus contains very short excerpts of the Gross Concerto, but none with the maestro at the nose flute. But then, the bonus features a 1972 interview of Peter Schickele by Gordon Hunt for his TV program Hour Glass (Canadian Broadcasting Corp.).

A real archive, with Peter Schickele presenting the nose flute principle, with a shiny red Humanatone in his hand.

Note that the Gross Concerto is not the only work featuring a nose flute in Schickele's work. At least another piece, from the CD Portrait of P.D.Q. Bach (Vanguard ed.), named Angus Dei (no typo there:) is played with many instruments including nose flutes. Anyway, I was not able to clearly discern their notes in the ensemble.

Concerto for Bassoon and Nose Whistle (1966)
Warrick L. Carter (born in 1942)
This is the most mysterious nose flute concerto: I don't know nothing about it. Its composer, Dr. Warrick L. Carter made a great career. Starting with musical teaching and composing at University of Maryand in the late 1960's, Dr. Carter successively became Dean of Faculty and Provost at Berklee College of Music, Director of Entertainment Arts at Walt Disney Entertainment, President of Columbia College in 2000, among many other functions. 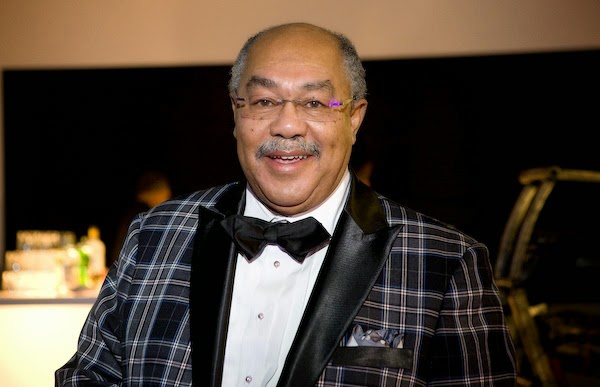 According to his biography published on Answers.com, Warrick Carter composed a Concerto for Bassoon and Nose Whistle in 1966. I tried to reach Dr. Carter to get more info, but nobody answered my requests to be put in touch with him...

Concerto Pomposo (2000)
Ulrich Nehls (born in 1959), with the pseudonym Jean-Marie Hottetotte
I will not much say about this concerto since I already did in this post.

Let's just say that the Concerto Pomposo is the most documented concerto for nose flute. Indeed, not only Ulrich Nehls generously published the sheets on imslp.org (and thus in public domain), answered all of our questions about this work, but the concerto was performed by the Brethren Bass ensemble, but also by Kentucky T. Dutchersmith and the Maple City Chamber Orchestra: 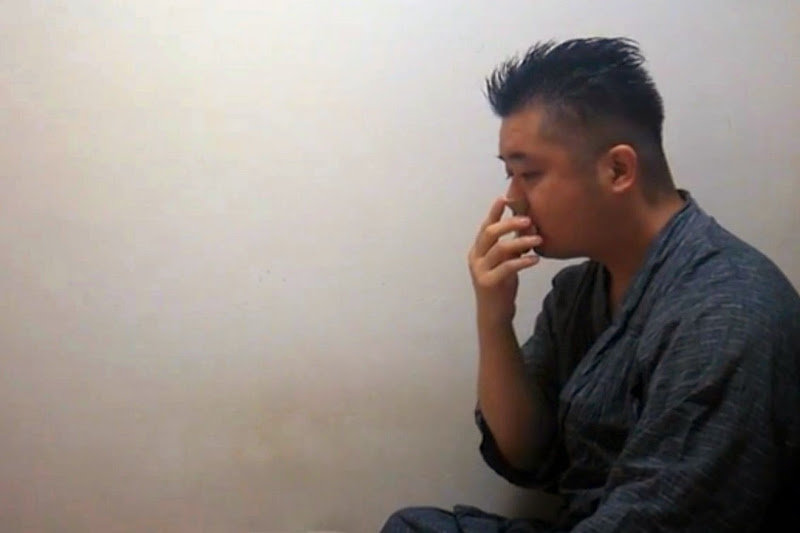 It had been unfair that we didn't post yet a video about Mr. Hideki Arai, a Japanese noseflutist who has posted no less than 21 nose flute videos over a year. Mr. Arai plays classical music themes, but also what one could call "standards" (El Condor Pasa, Evening Primrose, ...). Apparently, Mr. Arai plays a ceramic Bocarina™.
The accuracy of his playing is astonishing, and he has a very peculiar sound, with (maybe a bit too much?) vibrato (produced by nose flute quivering). His videos are very recognizable, humble, always framed the same way on a white background and played with no background music. Really worth watching them.


All the other videos on Hideki Arai's Youtube channel 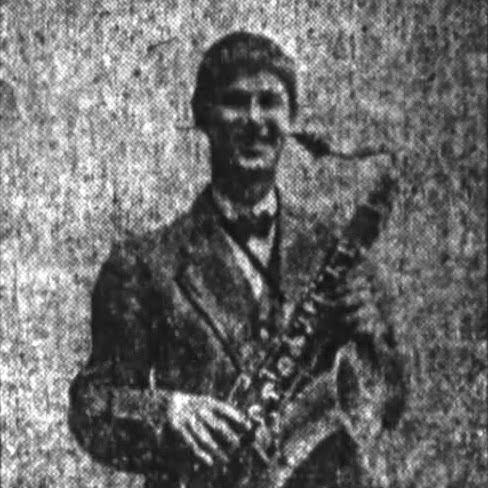 Harry Batchelor, was a saxophonist who performed in the 1910s a musical and comical show with a certain success. On the Vaudeville theaters scenes, his show "The Musical Rube" (as he got nicknamed) was a mix of music and imitations. He was a talented muti-instrumentist, mainly focused on the alto saxophone, but also playing tenor sax, clarinet, banjo, ocarina and « nose whistle ». 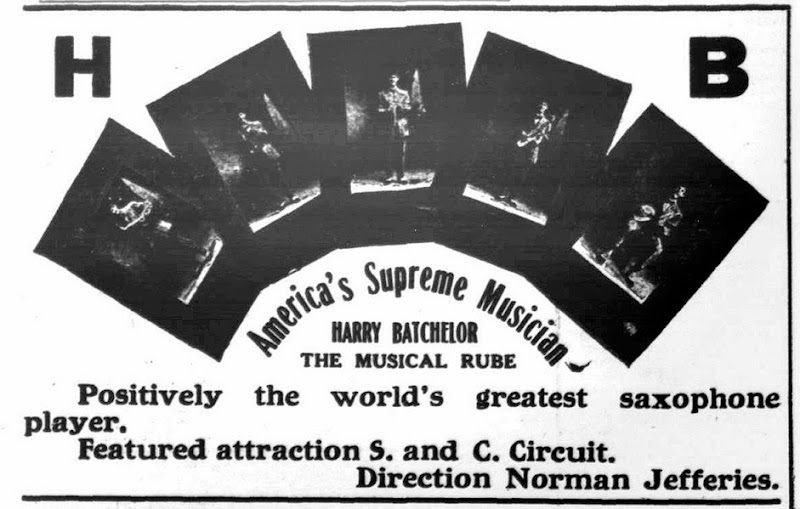 Apparently, Harry was active and famous from around 1906 (the popular saxophone "wave") and until 1917. Did he leave for war then? I found no other mentions in the newspapers after June.
Alas, no picture with the nose flute... 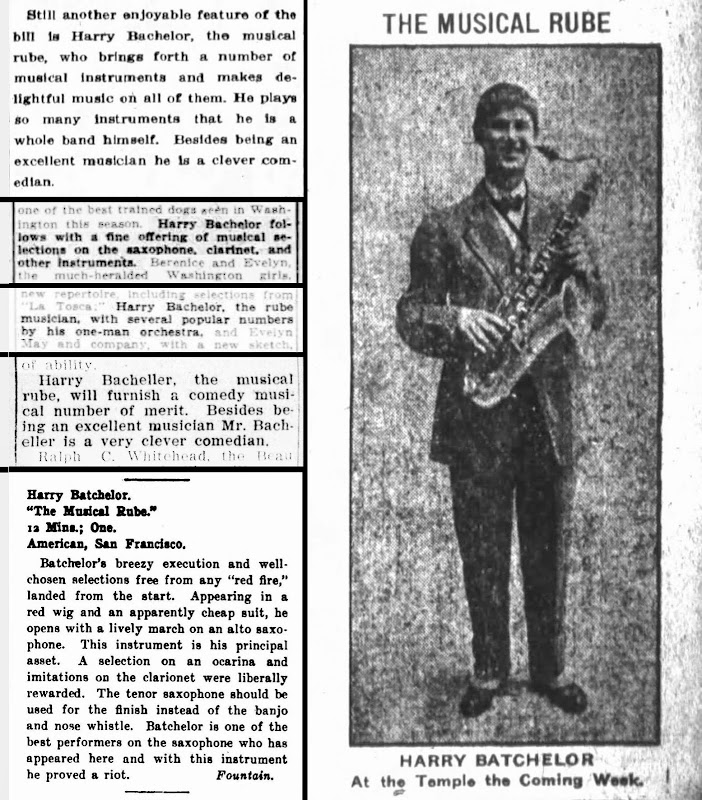