The pure sound of Tetsuyuki Sudare

Mr. Tetsuyuki Sudare is the owner of the online shop Temiruya, where you can order the clay nose flutes made by the potter-craftsman Hiroaki Sasaki. But Tetsuyuki Sudare is also a very fine nose flute player! In this fresh video, he whistles a tune with a very clear and precise sound... Beautiful! The video is a part of The Story behind the Confidential History of the Nose Flute by the NHK (Japanese TV and radio channels).

About the clay nose flutes by Hiroaki Sasaki, you may like to read this post. You can order them from Temiruya.

Is there a cooler stand ?

Is there a cooler stand than the one shown in this video ? High tech articulations, very solid... It could probably support a tuba! Well, the player is a doctor, the video belongs to channel dedicated to orthodontics, and maybe the stand is usually used for a dentistry device... Note that the lady at the end of the video has got beautiful teeth.
Thanks to Brian F. for having shared the link!

Email ThisBlogThis!Share to TwitterShare to FacebookShare to Pinterest
Libellés : hands-free, United States of A., videos

Bocarina™ part V : The Ones you'll never have... 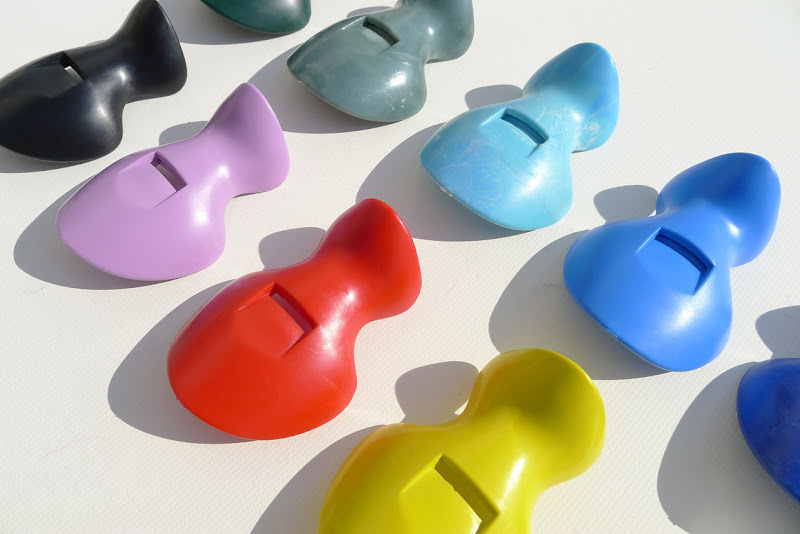 No, you'll never have them, because they don't exist, and probably never will. These are collector items, witnesses of the beginnings of the production, tests, rejects and « interim » solutions. Different colors, plastics, methods and improvements on the mould... You can shout and cry, supplicate and roll on the floor, you'll never have them. Well... if you order a batch of 10,000, a deal would probably be possible :)

Chris Schuermans, inventor and designer of the Bocarina™, answered a new series of questions we asked him, regarding those production tests. 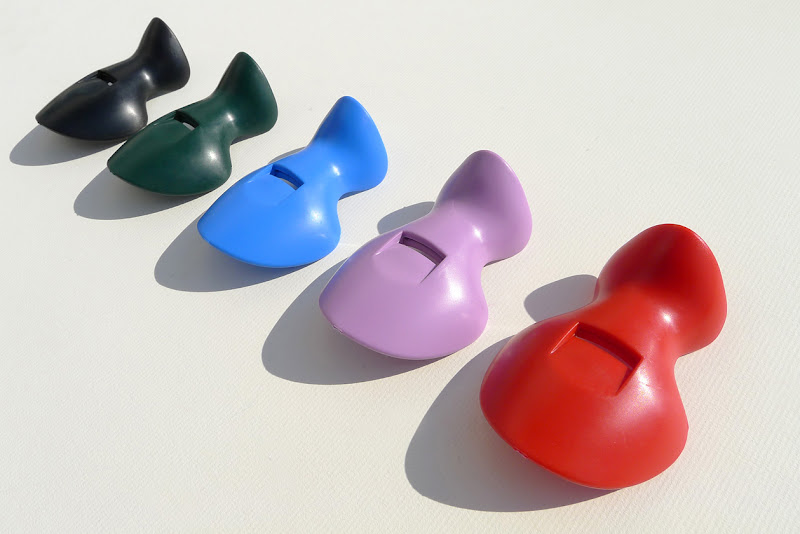 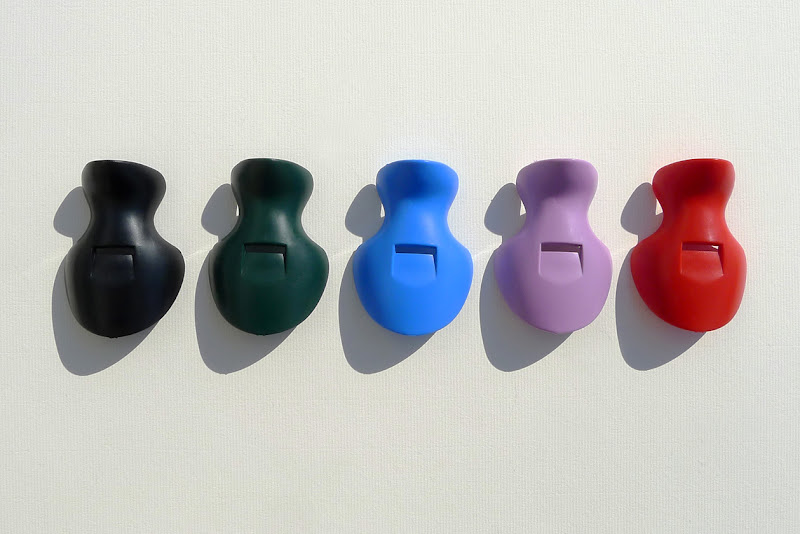 - Why did you begin with Polypropylene? Was it a matter of cost?
- The tool maker could not solve the problem of the flow marks (crappy skin and/or wavy labium [see below]) on the surface of the Bocarina™ when ABS plastic was used. He modified the injection point again and again, but it didn’t work. I was eager to start marketing the Bocarina™ and had a big festival (Aardklop) coming up, so the toolmaker suggested that we use Polypropylene because it has better flow characteristics and it does not have a smooth surface like ABS, so it won’t show the flow problems. This was only an interim solution. The cost of both plastics is about the same.

Example of the « crappy skin and wavy labium » flaw on the first ABS batch : 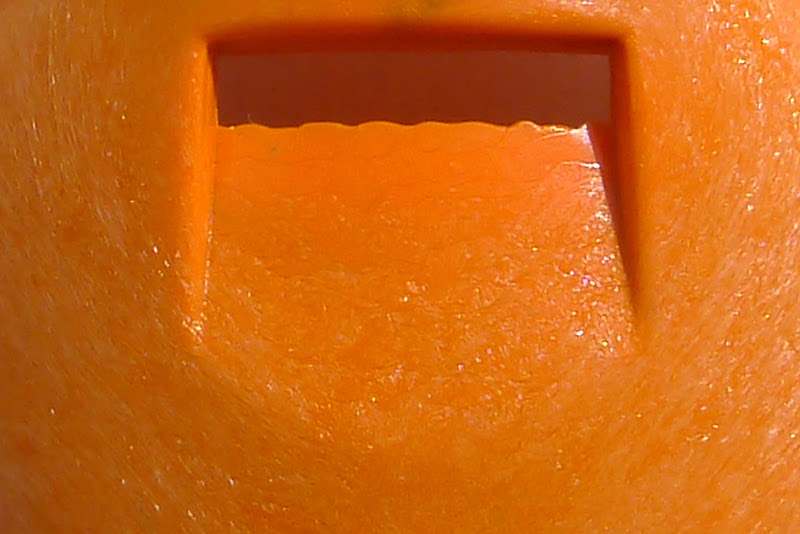 And here, a comparison of the original and final injection points on ABS Bocarinas™:

- Since the mould is the same, why are the Polypropylene flutes better for high tones ?
- Interestingly, plastics have specific shrinkage/expansion coefficients. ABS shrinks +/- 1% whereas Polypropylene shrinks about 1.5% The shrinkage of the labium window and the air passage affects the overall performance of the instrument.

- Why did you stop and turn to ABS?
- The mould was designed for ABS production.
The toolmaker solved the problem of the flow marks by changing the injection point to the inside bottom of the Bocarina™ and also by installing a hot runner into the mould. A hot runner is a heated duct/pipe to facilitate the flow of plastic to the injection point on the mould (Yet strangely there is water circulating in the structure of the mould to keep it cool. This assists in reducing the production time (cycle time: mould closed to open)). 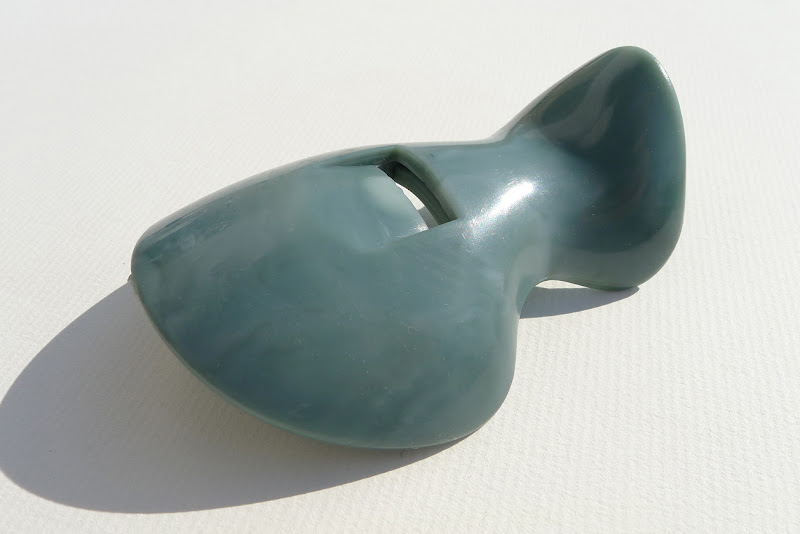 - Were the 2-colored Bocarinas the results of experiments or the transition between batches of different colors ?
- Moulds are tested with leftover material and yes, the bicolour is the result of the transition of one colour to the next. I had some really interesting ones but unfortunately they have been given away. 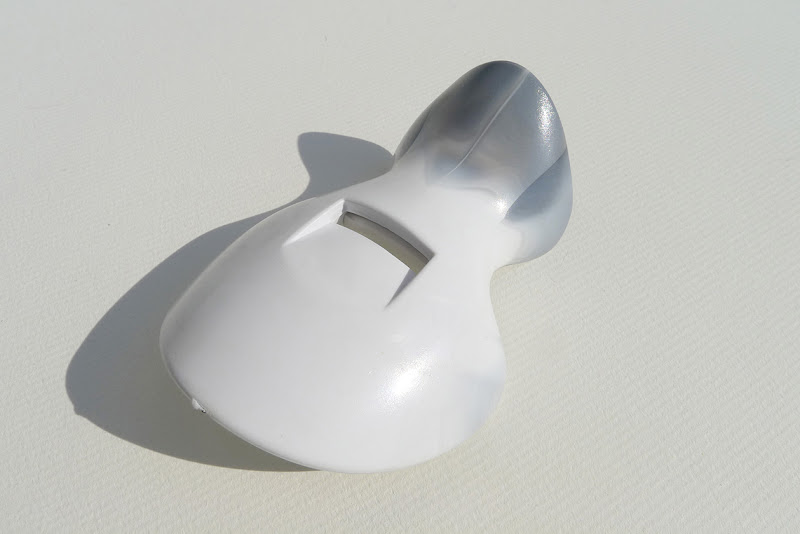 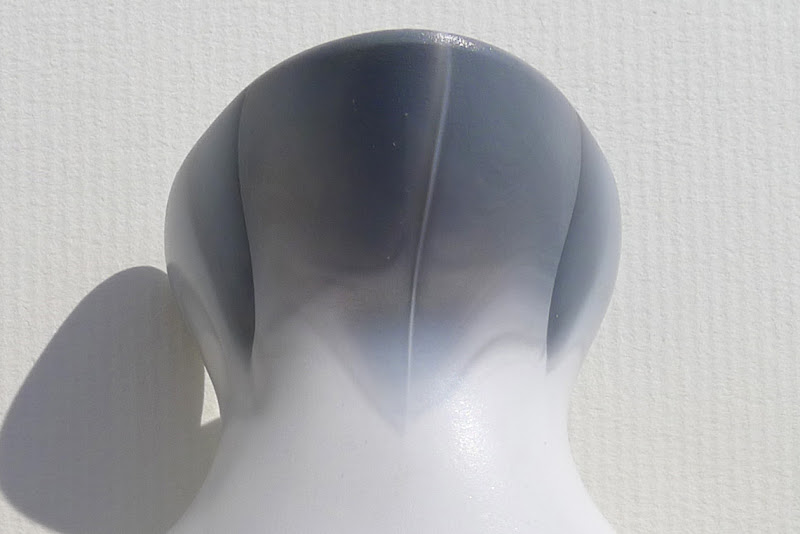 - Why is it so difficult to make a batch which mixed different colors ABS pellets to get "swirled psychedelic" Bocarina™?
- It is not difficult, the problem is that only a very few come out with the desired swirls the rest come out with the colours mixed quite evenly. If the pellets are mixed in the supply funnel/feeder (before they melt) then there will be no swirls but just an even mix of the various colours. There are however (expensive) bicolour and multicolour injectors that can be attached to the machine so that the colours don’t mix until they are injected into the mould. The percentage of each colour that is injected can also be controlled. The factory responsible for production unfortunately doesn’t have any of these injectors. 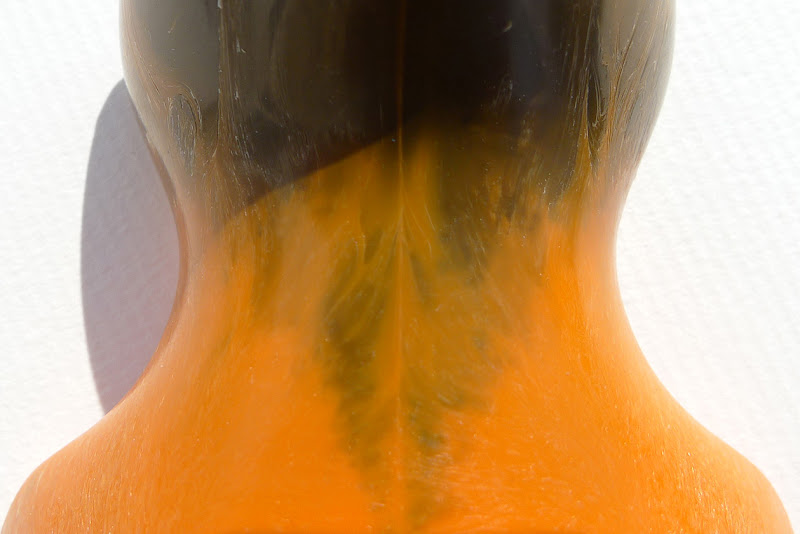 - What kind of plastic was used for the blue one, which is soft (PVC? Polyacetate?)?
- I’m really not sure what plastic/synthetic rubber was used. The toolmaker uses left over material to test the moulds. He was probably checking the shutoff of the two halves of the mould. To see if there is leakage (flashes) onto the separation surfaces of the mould. 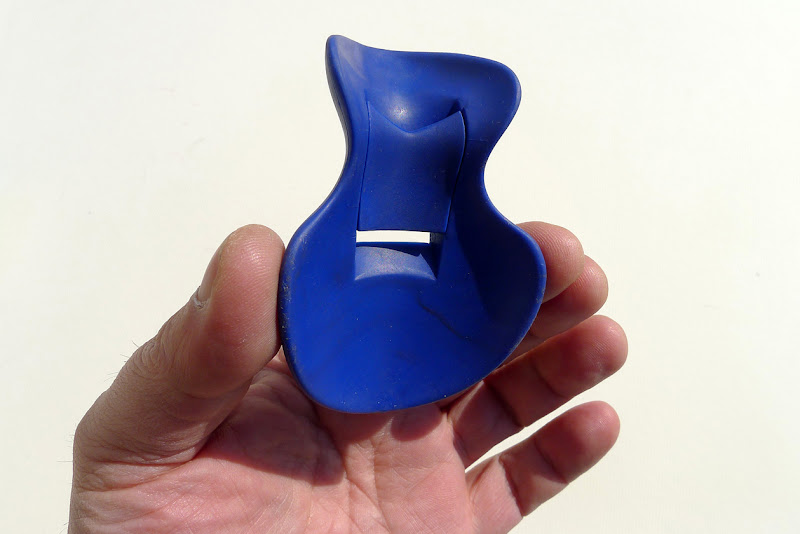 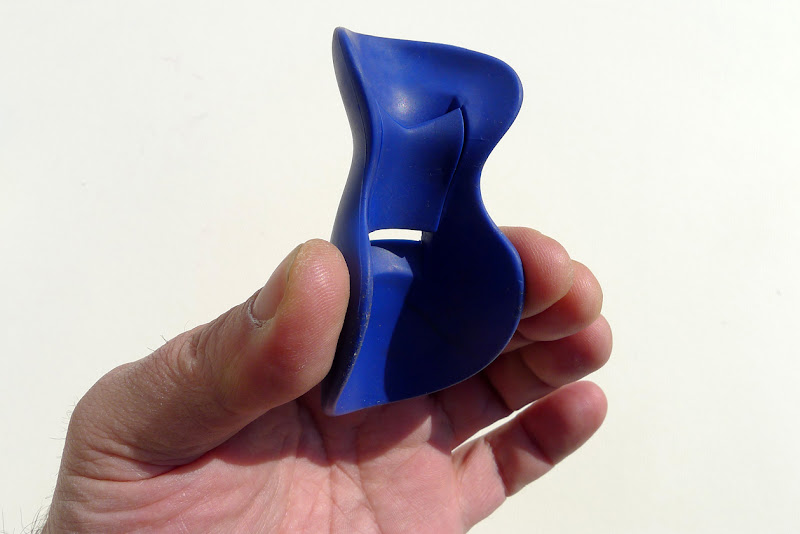 So, don't cry and shout... Just order Chris Schuermans a batch of 10,000 and choose your own colors, or just admire : 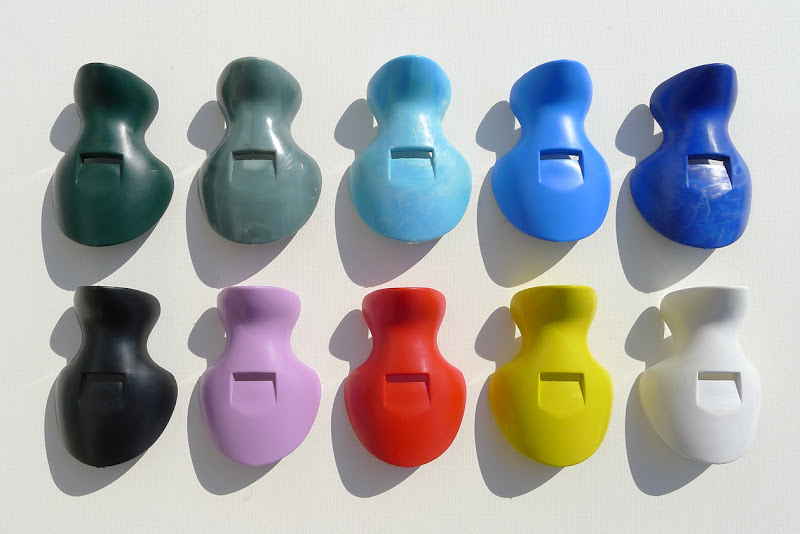 Fame! An article about Heita3!

News from the potato

Our potato nose flute has become so famous than we couldn't accept the idea of its total disparition. We've decided to embalm it. After a complete drying on the heater, it received several coats of very fluid varnish, then 2 coats of silver painting. 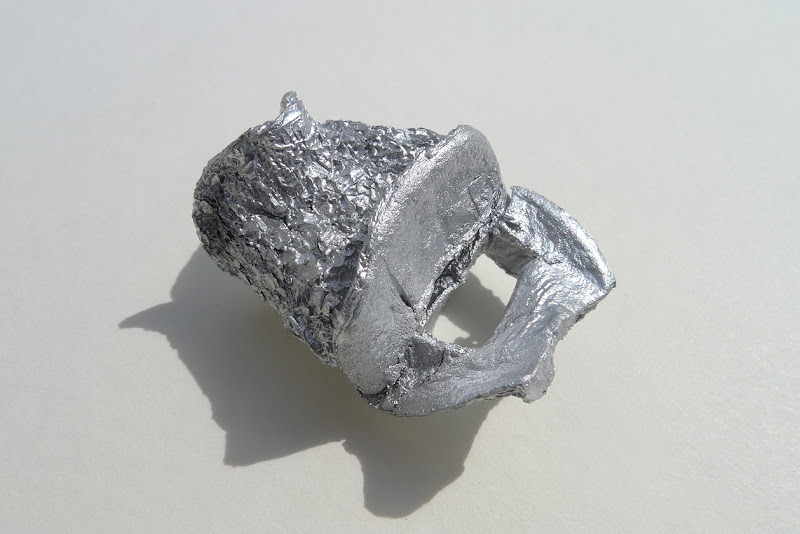 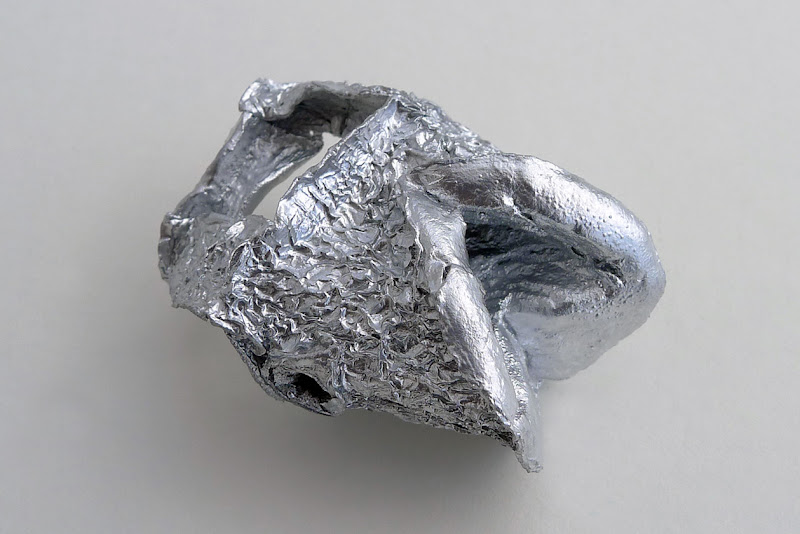 Email ThisBlogThis!Share to TwitterShare to FacebookShare to Pinterest
Libellés : France, home made

Jean-François Lapierre, aka Shalalaszwee, is a Quebecer musician from Montreal (CA). He plays the saxophone, violin, mandolin, banjo, oud, bass, guitar, ukulele, harmonica, djembe, washboard... and he bought his first nose flute just one week ago, a blue Bocarina™ bought on Ebay.

« I am so happy, just a few days playing the nose flute and I have tons of ideas, will upload lot﻿ more clips soon, want to try the bocarina along with washtub bass, mandolin and fiddle and through a mic with effects into the loop pedal! »

And within just a week, Shalalaszwee has uploaded 4 videos with his nose flute and a guitar, or with a ukulele, or making a slow building experimentation with a kalimba and a loop machine.

Here is his Ode to Joy, really full of joy, with a Bocarina™, a guitar, a bass and egg-maracas. And you can check his other videos on his Youtube channel.

A beautiful interpretation of Sweet Georgia Brown by the Gypsy Wranglers. The tune features a nose flute played by Joe Blumenthal, after he has been playing the double bass. The nose flute part begins at 1'21" 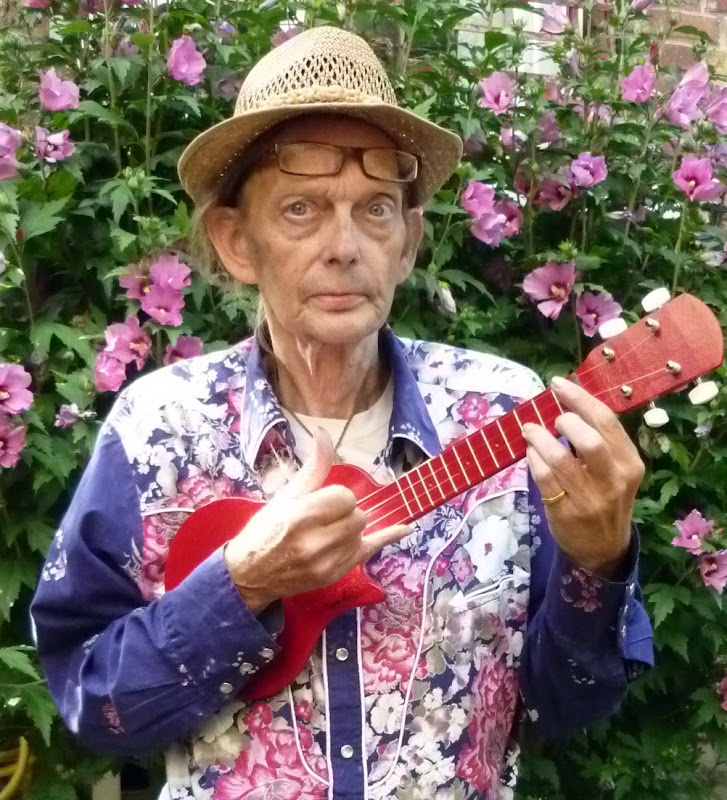 No, he was not a noseflutist, but a regular reader of this blog, and he gave me many encouragements making it. He also helped me a lot making the site www.chordmaster.org dedicated to plastic ukuleles. More, he was a friend.

He was a kind of "Mister Ukulele" in France, musician, historian, author of world known methods, he was a slide guitar player, a concert organizer, founder of ukulele.fr. More, he was a friend.

Cyril Lefebvre passed away today, and we all are very sad on this Easter sunday.

May his memory stay alive! 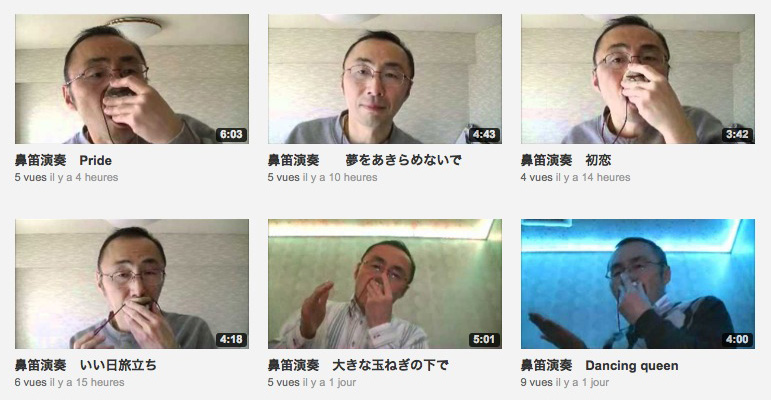 Heita3 on Korean TV! In this video, you can see the Japanese Koyama Junji making a carrot flute with a drill, whistling peppers and blowing the famous celery nose flute!

And here the (short) video :