Well, after having published those two posts (here and there) about the Austopfon, and ordered pictures of the sample conserved at Belgian MIM museum in Brussels, I finally found a real one! And in a rather good shape!

I have nothing to add to my previous conclusions. The stamping Ö.P.a definitely stands for Österreichisches Patent angemeldet (Austian Patent pending), meaning that the Austopfon dates of in between 1919 and 1922 (after Austria did "exist" and before the publication of Mahillon's book). That said, I just have to notice that the intake hole has a shape rather similar to the Schwan. Did Weidlich un Lohse took an Austopfon as a model?

Last November (on the 14th) a special musician appeared on German TV! Mr. Rahael Lezius, citizen of Plittersdorf (Baden-Wurttemberg, DE) applied for a contest called Das Supertalent 2015, produced by channel RTL, and his 'super talent' was that he plays the Nasenflöte! Yes! Six whole minutes dedicated to nosefluting! Raphael used a Bocarina® for himself, and gave Schwans to the members of the jury, who were definitely not ready to enjoy nose flute playing :) 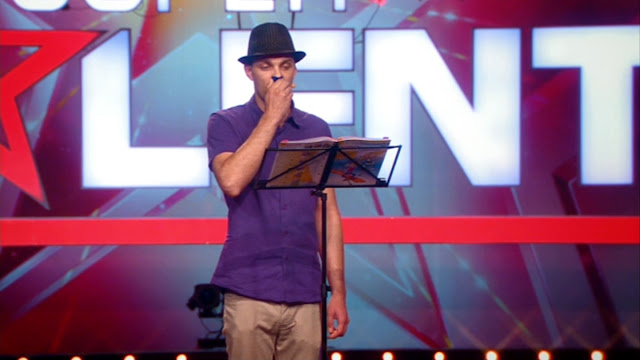 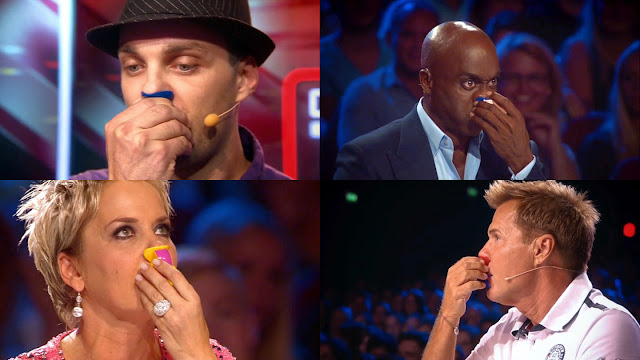 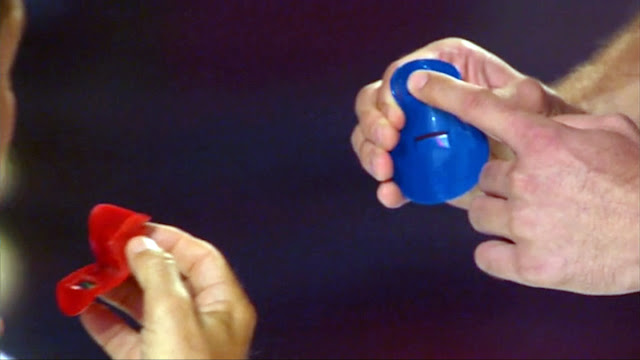 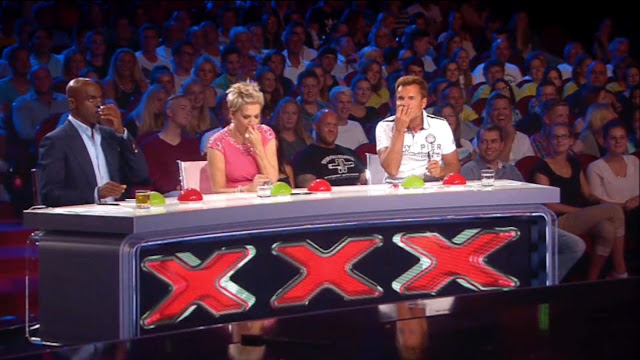 Here is the video (if you encounter problems to watch it, please try here):

You certainly remember UkeVal (aka LuthVal), the great and prolific ukulele and luth player, beacause we published here several of his nose flute videos (here, for instance). 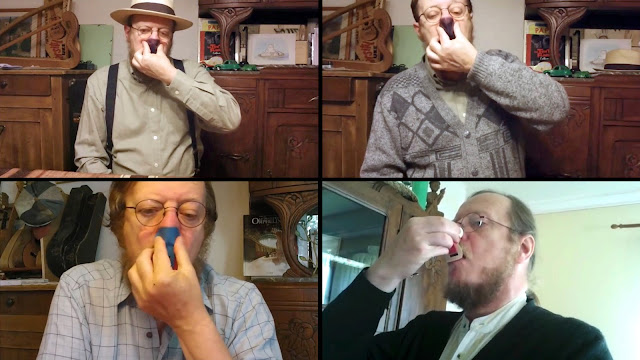 Mr. Valéry Sauvage is not only a musician, he is also a painter, a poet and a writer! And this multi-artist just published Pantins, Lutins, Nains de jardin… (et autres billevesées), a 223 pages book containing 12 beautiful and funny tales. They mix fairy stories with modernity, with ingenuity and humour. Because — if you hadn't understood yet — UkeVal is a kind of leprechaun himself… 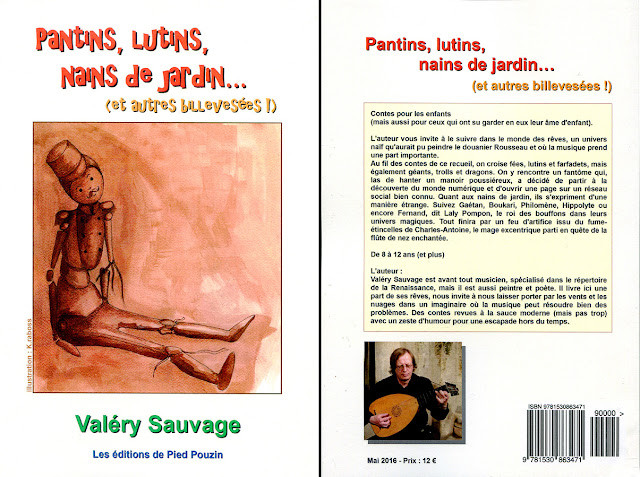 The last tale, entitled 'La Flûte de nez enchantée' ('The Magic Nose Flute') certainly captured our attention! It tells the story of Blondehilde. She's a tall musician-fairy of germanic origins, mastering the nose flute. Another character of this tale is Charles-Antoine, a kind of fat and black-dressed genie with a 'fume-étincelles' ('sparks smoking pipe'), used by him to materialize shapes. In order to comfort Blondehilde, whose cat Franzi had left for the cats paradise, Charles-Antoine begins a quest to find the most incredible nose flute for her…
Any resemblance to actual individuals or events is certainly not coincidental.

I really encourage you to read the rest of the story, as well as the other tales. Fun and pleasure guaranteed!

Long time ago, we posted about the Tupi Guaranis people and about their nose flute, which is allegedly the first 'buccal driven pitched', dating of... before Columbus. The ethnomusicologist Randy Raine-Reusch had answered us « there is no record of how long it has been used in Brazil, which suggests that it is longer than when Europeans made first contact. »

But there is another Brazilian tribe which makes a great use of nose flutes, the Pataxós (pronounced 'Patashós'). They do not live in the same area as the Tupi Guaranis, and do not share the same language (almost extinct), speaking the Maxakalí, linked to Macro-Gê.
But I think there is no offense towards any of these nations, to write they share(d) a lot of traditions and life activities. 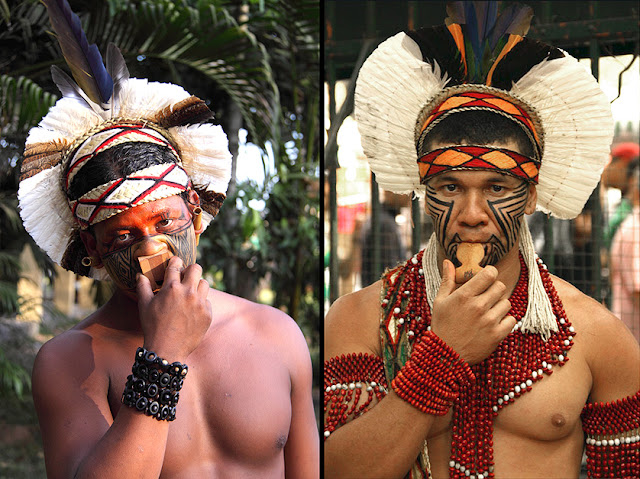 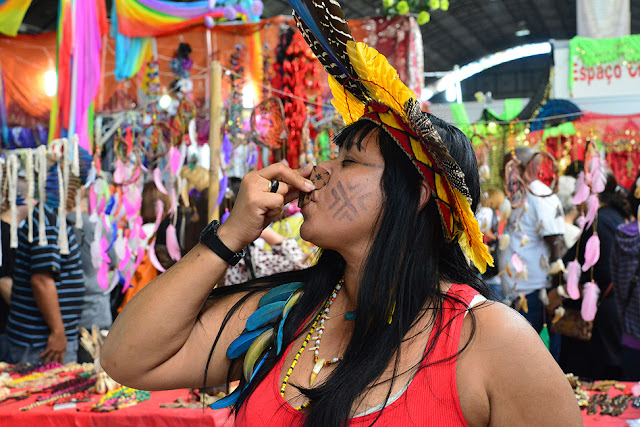 The Pataxós met the first Portuguese on 24th of April, 1500, according to the Voyage pittoresque et historique au Brésil, by the french artist J. B. Debret, 1834:

Debret depicted the Pataxós as primitive savages, which was not true at all. The Dr. Herman Ten Kate, in his article Sur Quelques peintres ethnographes dans l'Amérique du Sud, in L'Anthropologie, 1911, will refute Debret's vision, as totally ridiculous « The composition (Fig. 20) intitled Botocoudos, Puris, Patachos and Macharis, representing a sylvan banquet of these indians, is ridiculous. This grimacing group, gorging around the fire, devouring all sorts of game, leads to think more of a meeting of frenetic anthropopithecus than of savages. » 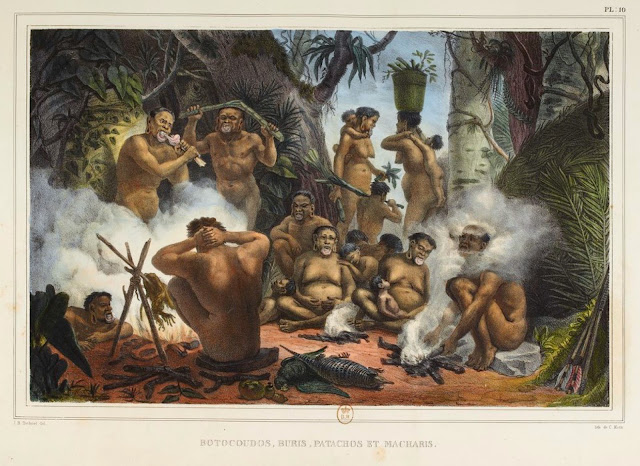 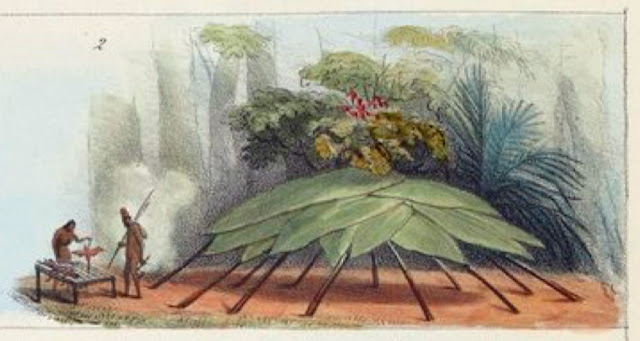 The other historical source is the book Maximilian, Prince of Wied-Neuwied, wrote in 1820, after his travel to Brazil. 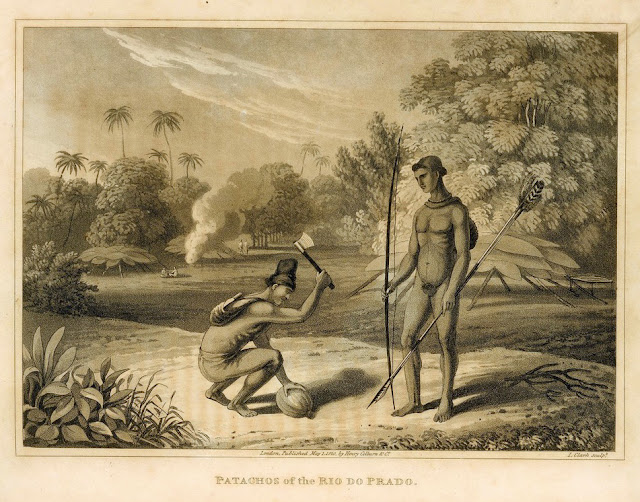 It is interesting to read in Maximilian's book that Frequently, these savages [the Pataxós] counterfeited the voices of owls, capueira and other birds, mainly the ones that are heard only at evening

Unfortunately, neither Debret nor Prince Maximilian mentioned some kind of nose bird call...

This website does: Índios da tribo Pataxó, da Bahia, mostraram ao G1 como fazem para se comunicar no meio da mata preservada na região de Porto Seguro (BA). Eles usam um apito de madeira para imitar o som de pássaros. O repertório é incontável, segundo o indígena Itaguari (...), that is (more or less): Indians of the Pataxó tribe, of Bahia, showed the G1 as they do to communicate in the preserved woods in the region of Porto Seguro (BA). They use a wooden whistle to imitate the sound of birds. The repertoire is uncountable, according to the Indian Itaguari (...)

Indeed, there are many pictures showing Pataxós playing a nose flute, with or without their traditional costume... 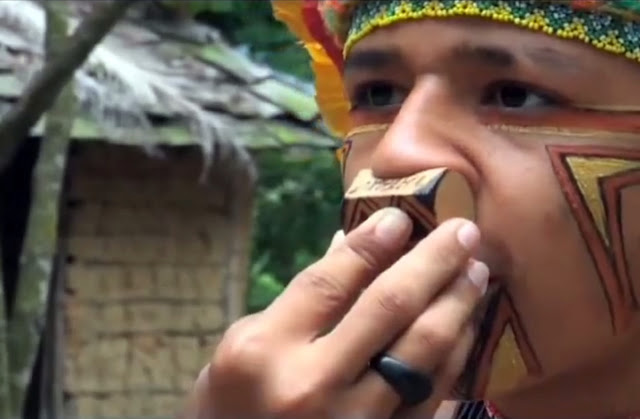 … and as many videos showing them imitating birds (well, they do not become invisible in the videos, but it's because they are not in the forest):

As you can see, there are many. And when you cannot see a nose flute in a Pataxó video, you generally can hear one.

Whistle Zabelê - unusual sound instrument that is played with the blowing of the nose and which can reproduce the sounds of various birds, useful when hunting them [PDF source]

Whistles | Different shapes of whistles, which construction is greatly simplified, but functional. One that stands out is called Zabelê, whose breath is given through the nose and uses the mouth as speaker and sound modulator element. With it, it is possible to imitate the sounds of various birds, widely used in hunting.[PDF source]

The 'Zabelê whistle' got probably its name from the bird called Zabelê, the Yellow-legged tinamou. Here is a video

Here is the Zabelê song, and you can hear it looks rather easy to imitate with a nose flute:


While the apito Zabelê is sometimes left raw, many of the Pataxós nose flutes are ornated with geometric drawings: 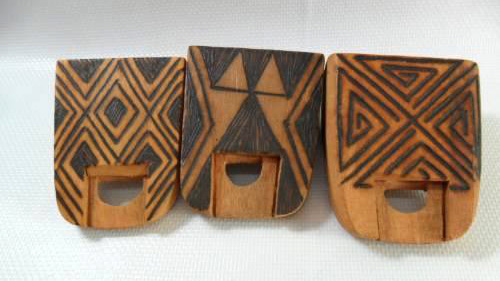 Today, the Pataxós people are about 11,000, and fight to preserve their land and their language. They recently capped the pope Francisco, who was visiting Brazil, with a traditional Cocar. The story doesn't say if they also offered him an Zabelê nose flute… 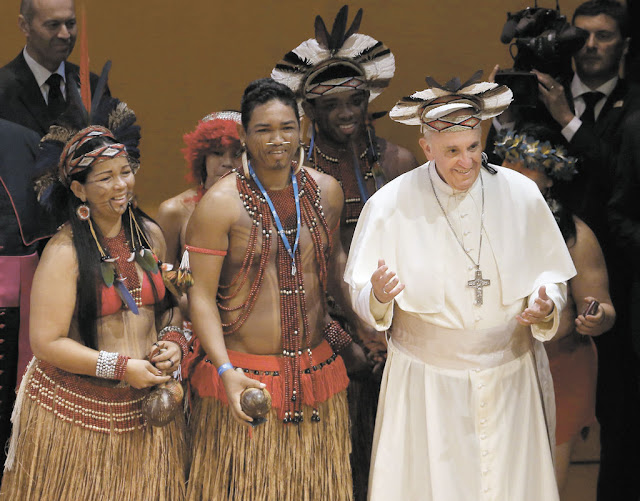