It's been a long long time I wanted to get and review the japanese book entitled 鼻笛って楽しいね！～だれでも吹けて、心もカラダも元気になれる不思議な楽器～, which can be translated, more or less, by Nose flute is fun! ~ Anyone Can Blow A Strange Instrument And Be Able To Get Well In The Mind And The Body. It is accompanied by a CD and a small plastic nose flute.

It was not so easy. I had to find a webshop in Japan that was "Google translatable" and that accepted foreign orders and easy payment. I didn't find. So I had to subscribe to a japanese shipping redirection company, in order to get a japanese address (Tenso.com) Then I had to scan all the pages, and compute them with an OCR software, and then translate the paragraphs one by one within Google. Ouch. I cannot say I was able to understand more than the global topics :)
---

Nose flute is fun! was originally published on May 1, 2013, by Amuse Co., Ltd (Tokyo) and has no official unique author: it's a corporate book produced by a team of redactors, designers, photographers, illustrators and experts. Its 48 pages are definitely "children oriented" (the size of the nose flute too) but contains lots of very interesting topics for adult players. 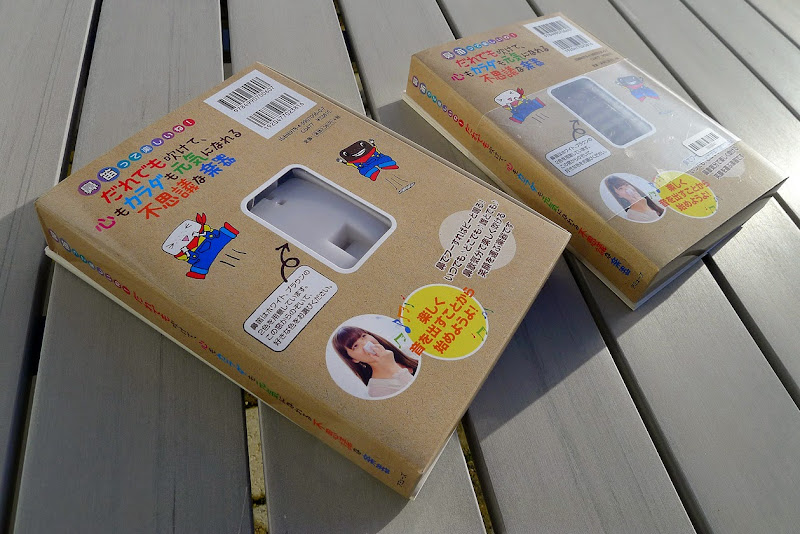 The pack book/CD + nose flute comes bundled with a cellophane band gathering a cardboard box and the book. The box displays the nose flute through a little window, so you can choose the colour you want : white or brown.

The book is nicely printed and full of nice, clever and funny illustrations (drawings, figures and photographs). It is structured in a logical sequence: the nose flute and how to play it, interviews of nose flute musicians, techniques and exercises, other info.

This introductory chapter naturally explain how to get a sound from Fuppy, the sweet little nose flute provided with the book. Regular technique :

(...) First, press the nose lightly into the big recess on the inside of the whistle. Next, open the mouth in the form of when you say "Oh", and lightly apply the bottom edge of the flute over the lower lip. Nose flute is held diagonally at this moment, please be careful that there is no gap at the top of the nose flute. (...)

Let's play music (with the CD)

This part explain that the songs 1-7 are for "nose flute training in the mood for a walk", selected to be played while dancing. The 8-13 are dedicated to "Nutrition - nose flute relaxes the mind" (google translation:). All of them supervised by sensei Mosurin, for sure. And the last 14-26 songs form a selection of tunes in a nose flute karaoke mode. They were recorded by the famous japanese band Begin.


I will teach you Fuppy's secrets

Here we learn that the nice and sweet little nose flute provided with the box is named Fuppy (フッピ).
The baby is made of ABS plastic, and has been especially designed in order to be cleaned easily by opening it in to part (see Fuppy's review)

Long interview of Mr. Higa SakaeNoboru, AKA Higaeisho, from the band Begin. Begin is a very famous J-Pop band from Ishigaki island (Okinawa prefecture). Their sound contains many elements of traditional Okinawan Music, and prominently features the sanshin. The band is linked to Amuse Co., which produced this book and the nose flute.
Higa SakaeNoboru (sanshin, vocals,...) is also a nose flute player.
In the interview, Higaeisho tells how he came to nose flute, why he likes the hanabue and that he wants to spread nose flute playing.

"I think that it is good to spend my remaining life with nose flute". We learn that sensei Mosurin performed 200 times in 2012! His love of music began very early: they had 5 or 6 nursery rhyme books at home and the little child was used to asking every day his mother to sing. Then he became soloist athe elementary school choir.
In 2001 he met the nose blute by chance.

Then Mosurin tells a quick history of nose flutes, mentionning the metal Humanatone, then the german plastic Nasenflöte, and it seems (as far as I can understand) that Mosurin thinks that the german nose flute came from Brazil (In fact, the plastic Schwann is the direct continuation of the metal nose flute produced in Brunndöbra [see here], which was an indirect steal of the Humanatone).

Mr. Mosurin also describes other nose flutes coming from abroad, mentioning the Vietnamese production, and even a recent model produced in South Africa (the Bocarina, for sure).

We also learn that Mosurin practice nose flute 3 hours a day. Then, the master deals with students and classrooms.

This double page shows nose flutes made of different materials (wood, bamboo, clay, plastics), all coming from Mosurin's own collection.


Get healthy with the nose flute

This important chapter explains how "Nose flute is connected with nature" and how its practice is good for your health. It describes the breath in detail, notably putting the stress on the two kinds of breath, thoracic and abdominal. Exercises designed & Explanations: Tsuhako Hirono (health exercise guidance officer).

The conclusion is that « Advantage of thoracic breathing is that posture is improved ».
And that « The abdominal respiration, which can lower the diaphragm, to capture a lot of oxygen astride the lung, there is also a happy effect for the body.
The organization of the tip of the lung, there is a thing called alveoli shaped like a bunch of grapes. There are capillaries in the alveoli, we are to replace the carbon dioxide made in the body oxygen and therefore incorporates by breathing the "gas exchange", but that they take in oxygen a lot, from the capillaries of the alveoli component which has the effect of widening the blood vessels » (Google translation...)

The chapter is very detailed, and funnily illustrated, providing exercises to train your breath. 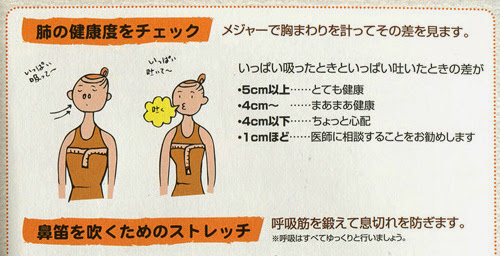 Captions:
Check the health of the lung
You see the difference in the measured chest circumference measure.
The difference when I exhale and when I inspire:

Thischapter is also very important (in size and in matter) and really can be useful for any nose flute player, even experimented. It describes numerous exercises *with* the nose flute, in order to improve breath and quality of sound.

Captions of the right image:
8) I train the postural muscle
To strengthen the body in the trunk and his breath

① In abdominal breathing, you can float a little back and breathe through the nose.
② Press the floor at the waist to put a force on the abdominal muscles while sounding the nose flute.
③ Repeat three times slowly back to ①.

This double page shows handmade pouches and bags for carrying your nose flute.

Several articles relating actions that have been made in order to spread nose flute playing, notably by the Poppokopi organization. The Ninth Symphony event (with 100 nose flutists).Exposition of the different Japanese hanabue organizations.

This part is a "scientific" exploration of the nose flute, with Q & A. For instance :

Q - How much big sound come out the nose flute?

* However, since there is a possibility that attention may become distracted, thinking judgment becomes dull lack of oxygen, please do not wipe absolutely nose flute while driving while driving!

The book "鼻笛って楽しいね" is, as far as I know, the first book *entirely* dedicated to nose flute ever published. In that, it must be lauded and hailed. As especially dedicated to beginners and children, I thought my interrest would have stopped here. But whether this work is a real good initiation to nose flute for newcomers, it contains a huge bunch of interesting and useful info, exercises, etc. Thus, I do recommend it to any nose flute player, even non japanese (because most of the drawings are self explanatory). More, the CD and the Fuppy nose flute are ngreat goodies (beware however: Fuppy has a small size)

If you have a japanese address (or friend:), it's easy:
when you type "鼻笛って楽しいね" in Google you will find many shops which sell the book, including Amazon.co.jp or Rakuten.ne.jp.

I would recommend Asmart.jp because they are part of the project of this nose flute bundle:
http://www.asmart.jp/Form/Product/ProductDetail.aspx?shop=0&cat=600608&swrd=&pid=10005566&vid=

2) you need to google-translate the shop page