Trophy Music Co, subsidiary of Grover, is the producer/distributor of the famous plastic Humanatone. The company mostly sells them in bulks of units wrapped in cellophane. But there is also a department called 1st Note which distributes the Humanatone with a better packaging, with the name "1st Note Nose Flute".

What's more unusual, is to find a wooden nose flute branded by Trophy Music... That's what I found, and with the help of my friend UkesterBrown, famous ukulele player, I was able to acquire it (the seller didn't want to sell out of USA ...!). Thank you David!

It is named "Concert Nose Flute", and is a "regular vietnamese nose flute" - I mean: not really an interesting wooden nose flute (badly and quickly made). What is interesting is the fact that Trophy distributed it. The back is printed with an "humorous" user manual, and the graphics looks like dedicated to an April Fool's Day use. 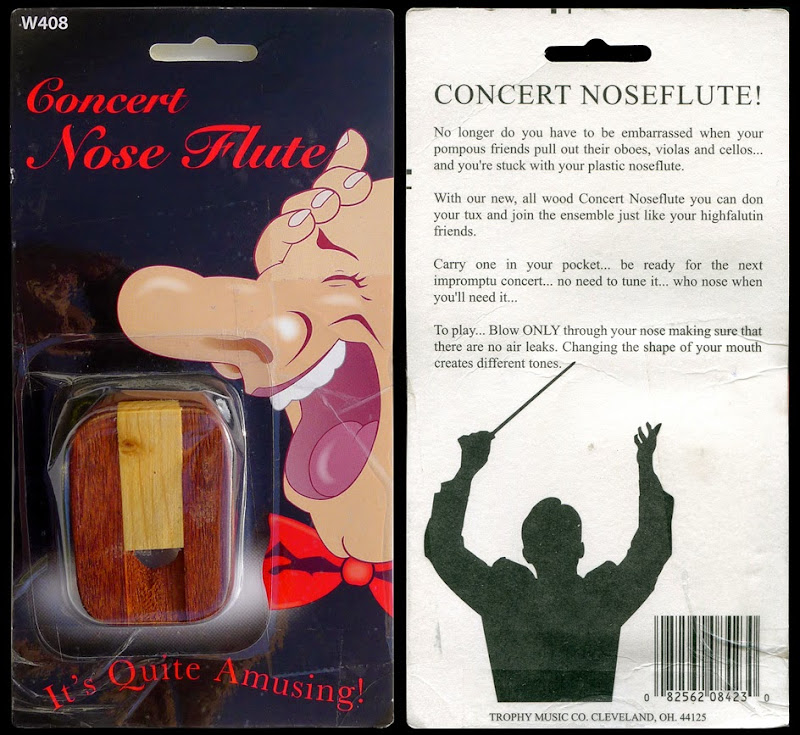 I checked the barcode (UPC-A : 0 82562 08423 0), in which 82562 refers to Trophy Music Co. and 08423 to the specific product itself, and found no occurrence, meaning that the product has been discontinued. However, the reference W408 still exist for a wooden nose flute in Trophy Music catalog, but apparently with no packaging (they probably understood that the laughing man was not compatible with their assertion Finally Noseflautist can be looked at as serious musicians (sic). So, it is not possible for me to date this nose flute, but I think it is from the 1990s. The "laughing bow tie man" graphics is the same that the former designed used to package the 1st Note Nose Flute (Humanatone). 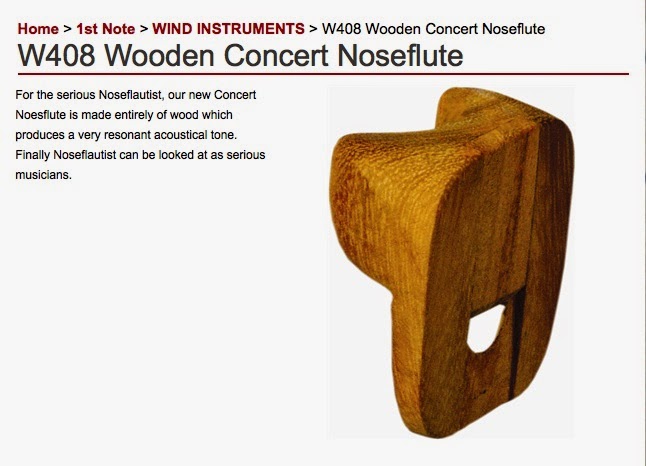 Here are the former and the current graphics of the 1st Note Nose Flute: 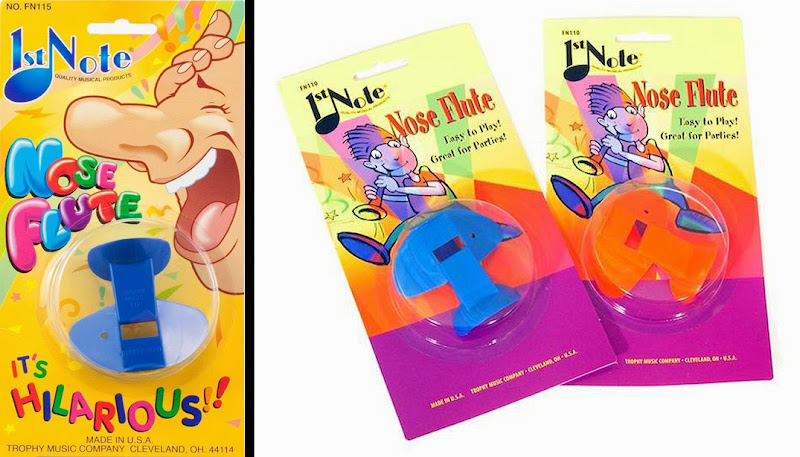 Just another picture of Lloyd Buford Threlkel, Honorary Degree Member of the Nose Flute Hall of Fame. It would be nice to find the original picture, since this one looks to be a multiple photocopies result. 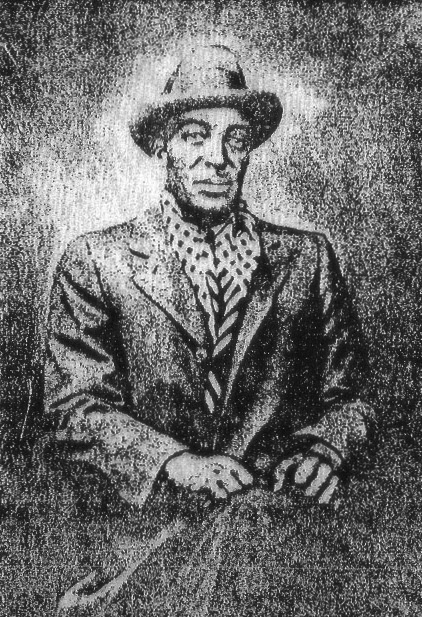 And just for the pleasure:

I found a vintage plastic Humanatone in its box which appears to be very interesting on several topics: datability, shape and Gretsch Co. politics. 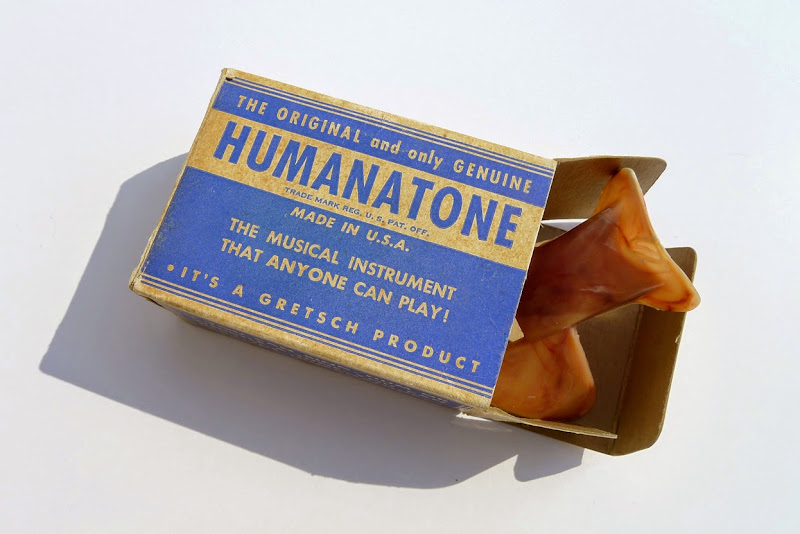 The nose flute is a plastic Humanatone branded by Gretsch, with the very original shape designed by Ernest W. Davis in his 1940 patent, which is slightly different of the current shape. The flute has a great but weird marbled color, a bit like a salmon roe with nerves and veins:)

It features the famous "tremolo hole" described in the patent, wears the Humanatone branding, the patent number, but not the Gretsch stamp yet. The nose flute is very badly (I should say not at all) burnished and show many plastic burrs.

Now, if you compare this early Humanatone to a current one, you can notice many differences... Indeed, the original shape is more rounded and the current prod. shows angles. But this is not all. There was no heel at the bottom of the mouth shield. The vintage one has wings a bit larger, its nose saddle is different, the size of the mouth hole is smaller in heigth, but the airway is broader. The nose cutaway is softer, the tremolo hole is conical, the typo font is not the same, ... Many, many tiny differences are noticeable. The plastic itself is not the same (early polystyrene? or celluloid?), and is thicker on the old Gretsch.


Now, the box. The box has a graphic design rather typical of the 1940s Gretsch graphics. The top specify "IT'S A GRETSCH PRODUCT" and the user manual is printed on the back side. But... Don't you think this box is a bit big for such a flat nose flute? Look at late 1940s Humanatone packages, they are much thinner...


Indeed, have a look at the whole spread box: 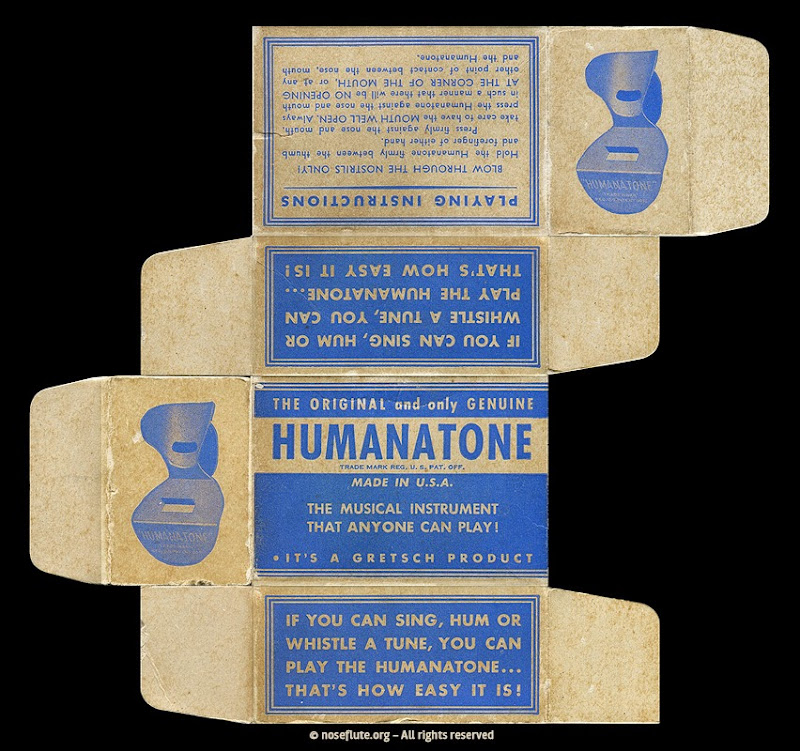 The side flaps, astonishingly, show a metal humanatone, and not the plastic one! How does it come? The box is printed with "IT'S A GRETSCH PRODUCT", and so can't be a late Stivers' Humanatone box. My hypothesis — as you know, I always have an hypothesis :) — is that when Fred Gretsch bought the Humanatone brand to the Stivers, he also bought the old stock and began to sell it with a Gretsch-branded packaging. Maybe was he waiting for the production of the new plastic nose flute. Then, when the metal nose flutes stock was out, there were still boxes printed with the metal flute, but Gretsch used them for the new plastic instruments. Then, they produced an adapted and flat packaging. Indeed, in 1944, the boxes were already showing the plastic model.

So, I can state this plastic Humanatone is a from a very early production batch, very likely from 1943 (the origins). Great find, isn't it? 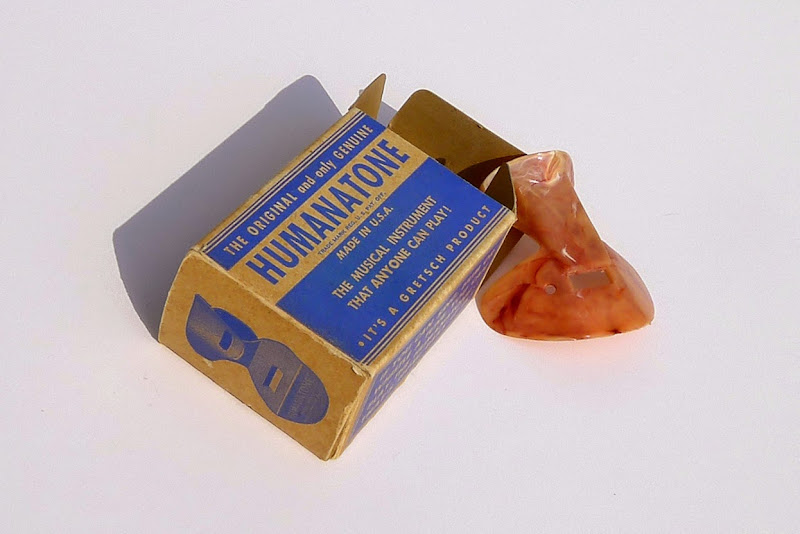 This one was difficult to find, because of the mispelling Humanatane for Humanatone :)
Nothing very special with this advertisement, but it dates from March 30, 1905, (in The Plymouth Tribune, Indiana), and that is an early advertisment campaign for this nose flute. 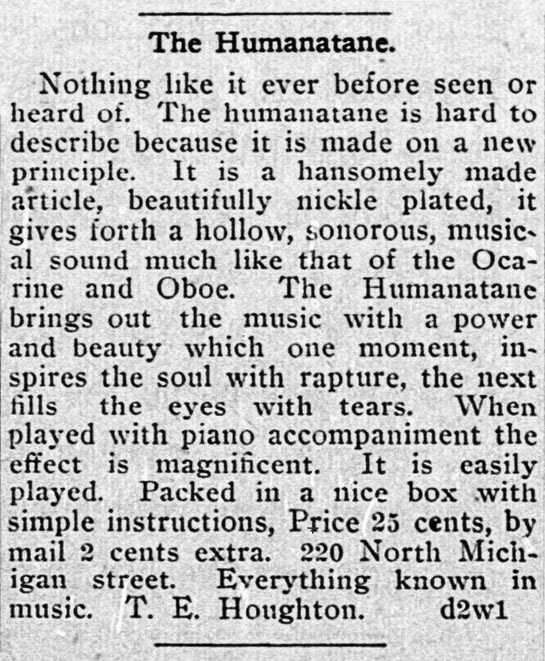