Tim Flood inducted in the NFoF!


Mr. Tim Flood passed away on 3rd of July, and many people are plunged into mourning. Indeed, Timothy Flood had several lives, and many people knew him through the different facets of his gifted personality.

Tim Flood (8 January 1927 – 3 July 2014) was an Irish celebrity. He was famous for having been six times an Irish National Champion of Hurling, a typical Irish sport, kind of a Gaelic field Hockey.


Flood first excelled at hurling in his youth. He arrived on the inter-county scene at the age of twenty two when he first linked up with the Wexford senior team. He made his senior debut in the 1947-48 National Hurling League. Flood went on to play a key part for Limerick during a golden age for the team, and won three All-Ireland medals, six Leinster medals and two National Hurling League medals.[2] He was an All-Ireland runner-up on three occasions. Wikipedia.
Besides his successful sportive carreer, Tim was a musician, and particularly a tenor banjo player (you can hear him playing with his son in this video)


Tim Flood played music all his life and was the mainstay of the well known Castleboro Céili Band. He, along with Larry Harrington, Larry Joyce, Bill Simpson, Jack Nolan, Noel and Ramie (Buzzer) Ryan and Paddy Joyce and later with Jim Murphy, Knoxtown kept the flag flying for Irish Music in our parish and outside it. He played and competed at all the fleadh ceoils around the country and sometimes adjudicated at competitions all over Wexford and beyond. Cloughbawngaa.
But what does interest us here, is Tim Flood's third career. Indeed, after his retirement, Tim became again a multiple champion in ... sheepdog trials! Tim was one of those handlers who use a nose flute as a shepherd tool.


Since his retirement from hurling Tim has been heavily involved in sheepdog trials, and he has represented Cloughbawn, Wexford, Leinster & Ireland on numerous occasions, on TV shows such as 'One Man And His Dog' and has travelled the world in his interest in this discipline. Cloughbawngaa.
In his book "One Man's Way... The Interviews" (WSN publications - York, UK, 2006), Austin Bennett interviews famous sheepdog handlers, and notably Tim Flood. In the excerpt below, we learn that the instrument was made by late Owen Humphreys, Talysarn, Wales.
(You can get the book here : allsheepdogs.com) 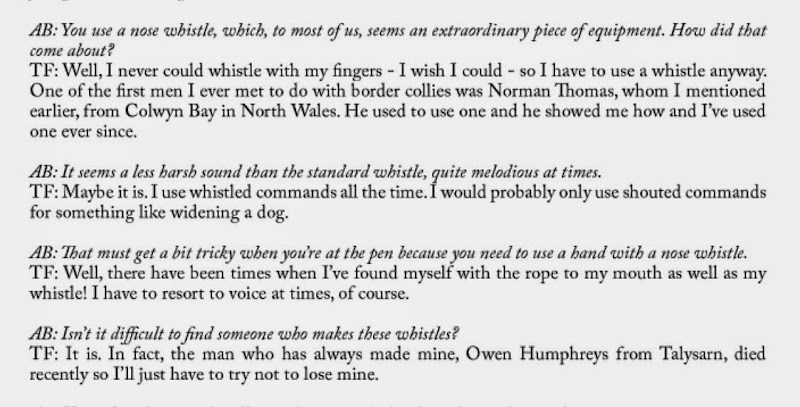 
Copyrighted pictures by Austin Bennett and Barbara Collins (no infringement intended):
It is very difficult to see the details of this nose flute on the pictures. However, I found a precious footage in which the instrument is closely shown. The interviewer, John Jude Doyle was the local pub owner.

As you can see, the nose flute - full brass - is from "Humanatone type", but has a huge air hole in the nose shield and has a flat mouth shield (no bending there). It is difficult to be affirmative, but it also looks like having a double wall nose shield, (as on Bernard Visser's vintage flute)

I also found an interesting RTÉ radio program (Farmweek - July 27, 2007). In the first part, Tim Flood mostly talks about his dogs, but from 3'23 till the end, we can hear the "herding nose flute" and From 4'46 until the end, Tim deals about the nose flute itself: 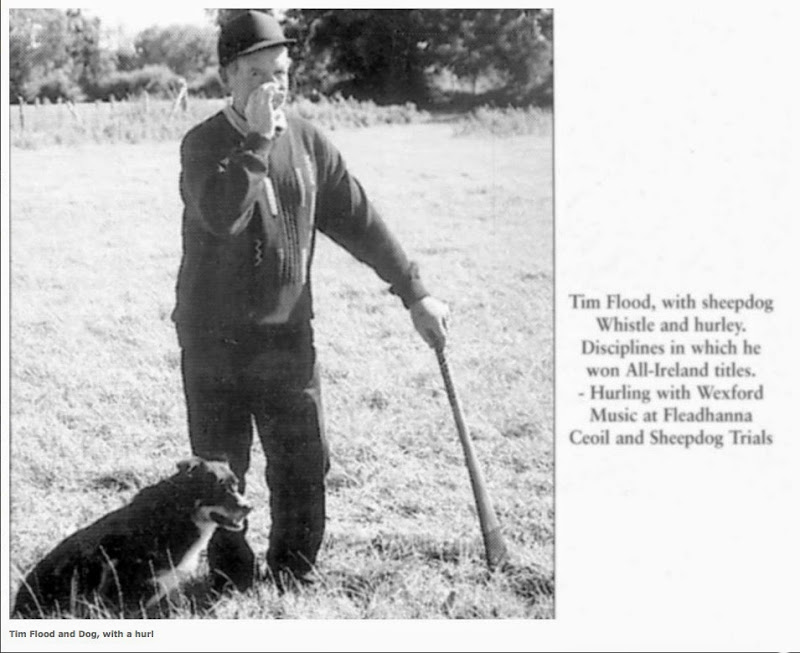 
For having used and promoted the nose flute as a herding tool, Tim Flood is inducted to the Nose Flute Hall of Fame, in the "Promoters" section!
-
Publié par UkeHeidi à l'adresse 7:03 AM 9 comments:

I had the opportunity to put the hand over a brass/copper nose flute. The seller only specified « it's coming from a farm background ». Indeed, it is a old British sheepdog nose whistle. 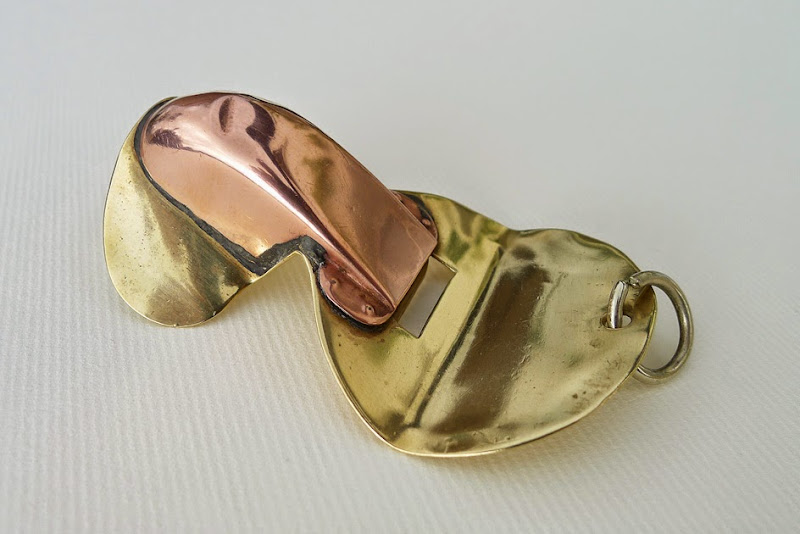 In Great Britain, sheepdog handlers use whistles to send orders to their herding dogs. Most of them use what called a "sheperd whistle", which are totally handsfree and can provide different tones (like this one or like the one used by Mr. Job Te Pas in this video)

Anyway, some sheepdog handlers used to whistle a nose flute for their job, but as we previously noticed in this post, they were (are) very few, because the nose whistles « obviously did not become popular ».

However, it was not the first time I met a shepherd nose whistle: I had previously "missed" this one:

It is interesting to notice that my sheepdog nose whistle was made with two metals: brass for the body and copper for the airway. Why that? I don't think this was done on acoustic reasons. So, either the bi-metal choice was made on an aesthetic purpose, or maybe, it was simply the result of "what is left in stock", as Mr. Heinrich Handler is used to crafting his Nasenflöten with residual wood pieces. 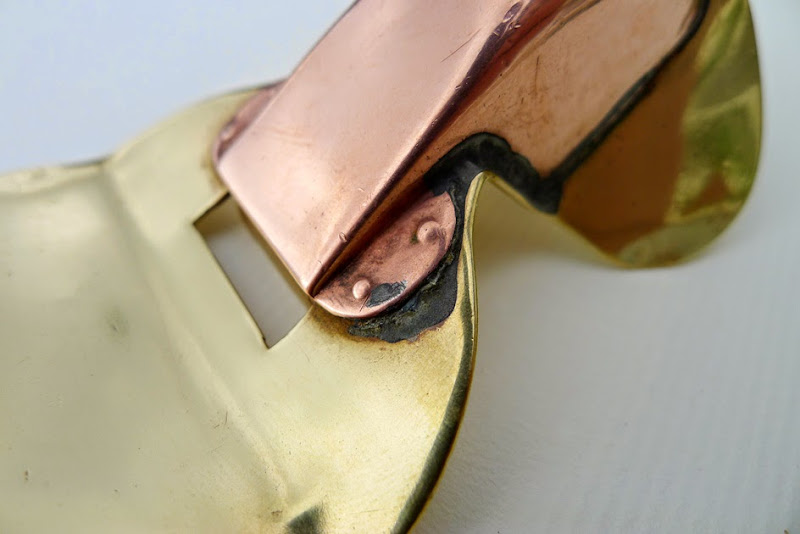 The flute was handcrafted, and some of the lines that have been drawn with a awl on the metal sheet are still visible. Even the nose hood shows some of those tracés, and we can still see a middle circle that was engraved between the two air holes.

I have no clue of the age of this instrument, but its shape is a pure imitation of a metal Humanatone (or Humanaphone since we are in Great Britain), with a much longer mouth shield (and the double air entrance).


While Johnson Smith was the most prefered novelty catalog in the US (hosting Humanatone and Magic Flute ads), Ellisdon's was its equivalent in the UK.


Ellisdon's catalog cover in the 1930/40's and the 1950's:
The nose flute proposed by Ellisdon's was the Magic Nose Flute, other name for the Humanatone or, more likely, of the Humanaphone, which was the British make of the Humanatone (this is just an hypothesis, but we are convinced of its reality, notably because of the visits of G. Stivers in London, etc.) Why do we write Humanaphone? Because the Humanaphone was stamped "ALL BRITISH MAKE", and the Magic Nose Flute — as drawn in the Ellisdon's early catalog — show a BRITISH MAKE stamping. Anyway, this stamping has disappeared in the 1950's ads. Is it significant of a change in the nose flute manufacturing? What's sure, is that it could correspond to the Humanatone Co. sale by the Stivers to Fred Gretsch. And also, it is certain that the change was intentional, since it is the original drawing that has been modified (and not a new drawing that would have neglected this stamping detail).

Another interesting point is the texts are absolutely the same, excepted for one sentence that does not exist anymore in the 1950's version: « It is made entirely of metal ». Since the modification did not gain a line of text (it's not a typo/lay out need), what is the reason of this correction? Wasn't the 1950's Magic Nose Flute made in metal? Again, we remember that the Humanaphone was *also* the first plastic nose flute. Did Ellisdon's propose a plastic Magic Nose Flute?

[EDIT]: Indeed! Our friend and reader Steven Parkes confirmed his "Ellisdon's" nose flute from 1950's was... a Schwan! 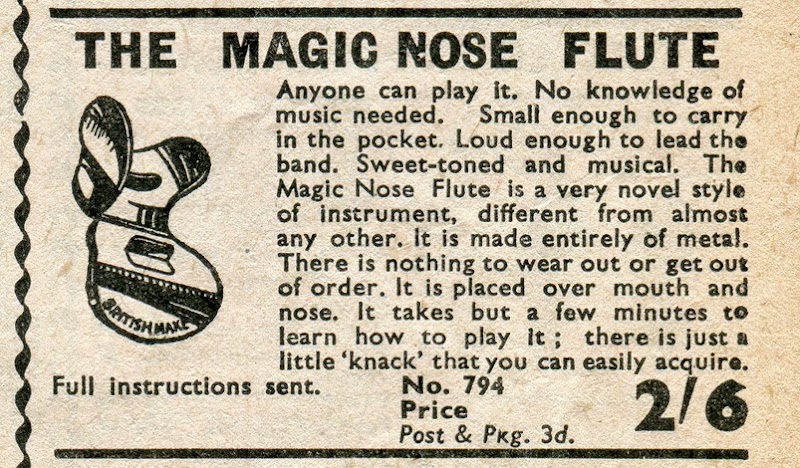 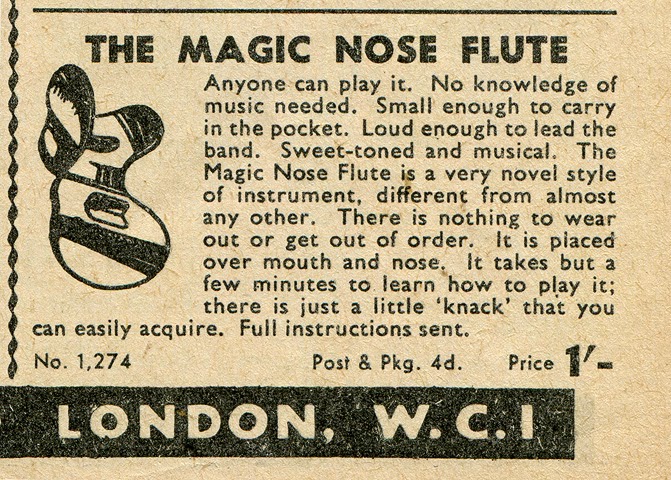 The same advertisement — with a renewed presentation text however — is continuously used in the 1960's. Then the ad disappeared.