The Musical Instruments Museum (MIM), in Brussels (Belgium), is one of the most important in the world. Its collection gathers more than 8,000 instruments, from all over the world. Its first curator, Victor-Charles Mahillon (Son of the brass instruments maker Charles Mahillon), was at the origin of the huge expansion of the collection. But Mahillon was also the author of the MIM impressive 5 volumes catalog (1880-1922), which served as the basis for the organological Hornbostel-Sachs classification still used today.

The MIM possesses a nose flute, which photo can be seen on Europeana, and accompanied with these comments:

A date is provided on the devoted MIM page: before 1913

The picture is medium-small, but large enough to check that the transcription of the stampings is wrong, specifying the noun NAZENFLOOT instead of NASENFLÖTE, which can be read by reversing the picture text (Nazenfloot is *not* a Flemish word for the nose flute). 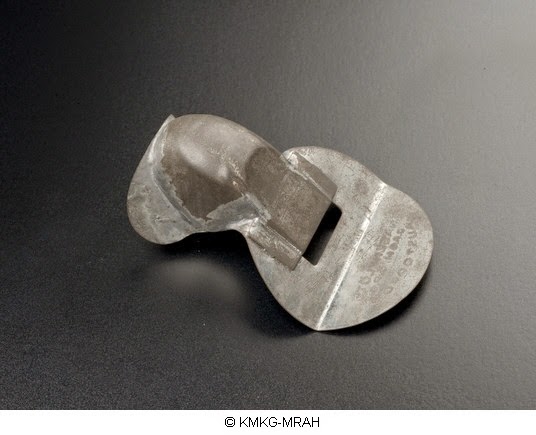 Redressed image from the picture above:

The stamping D.R.G.M. stands for Deutsches Reichsgebrauchsmuster, meaning that the nose flute was patented either in Germany, or in Austria. It is followed by the acronym Ö.P.O. which could have stood for Österreichisches Patentamt [something] (Austrian Patent Office [smtg]), and thus, would have lead us to an Austrian origin... But the meaning of "Ö.P.O." stays unknown.

Besides that, the brand Austopfon, not fully readable on the picture, was sounding bizarre as to the Nosy Diva (German lady) as to Christian Steinbrecher, musical patents and instruments connoisseur from Austria. Both suggested Austophon, with a "h" instead of the "f", for a more natural Germanic word sounding and morphology. Mr. Steinbrecher even added that if the nose flute was from Austrian origin, it would logically have been from after 1918, since Austria was not existing as such before. In that case, the name would have been built from Austo- (Austria) and -phon ("voice" in ancient Greek).

For sure, I didn't find the patent for this instrument, nor any mention of an Austopfon or Austophon. And since there was at least one mistake in the notice (the funky Nazenfloot), I wrote to the MIM. I received a quick and kind answer from Mr. Wim Bosmans, Curator of the European folk instruments Dept., who ascertained the mistake on Europeana (not Nazenfloot, but Nasenflöte in the stampings), but also confirmed the brand AUSTOPFON, the origin (Germany) and the date ("before 1913"). Mr. Bosmans also added that the instrument was commented in the 5th volume of the Mahillon's catalog, published in 1922, but which listing stopped in 1913, as stated by Mr. Ernest Closson, Mahillon's successor.

I found the 1922 fifth volume of Mahillon's catalog at a reasonable price, and indeed, the article #3198 deals with the Nasenflöte numbered 3198 in the MIM collection. No doubt about which nose flute Mahillon had in hand while writing the notice, but the text doesn't seem to be specific about the Austopfon, as it even doesn't mention the name. 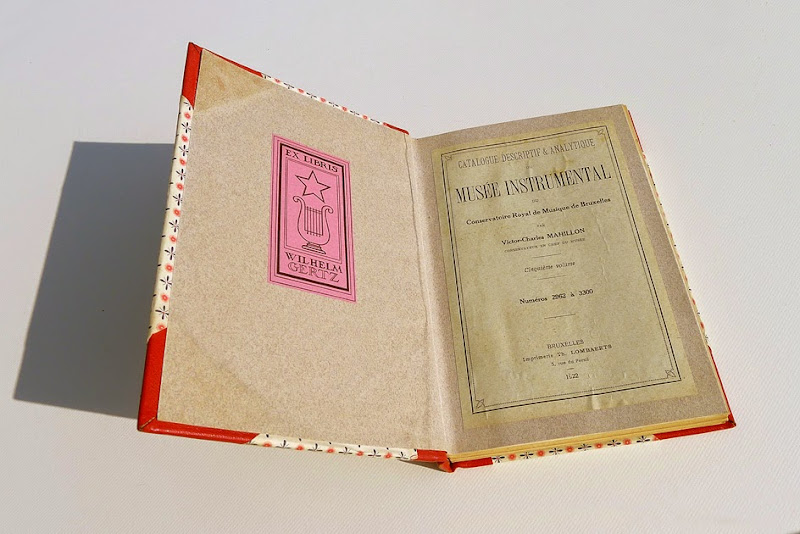 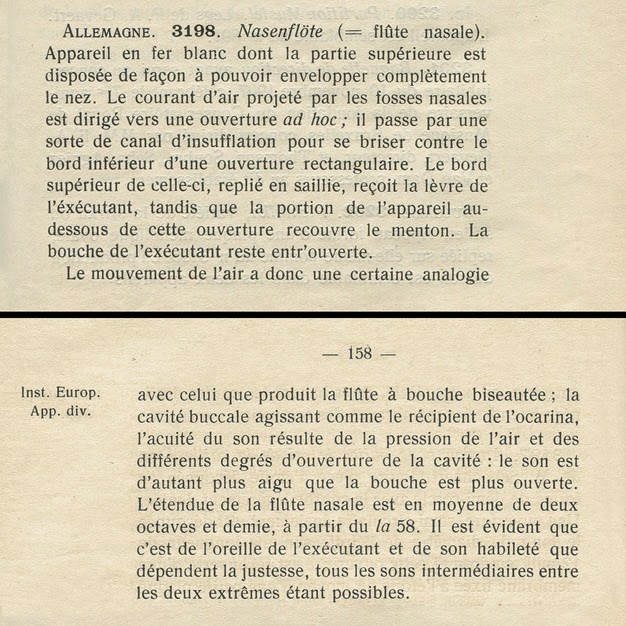 Tin device which superior part is set in order to be able to cover the whole nose. The breath projected by the nasal cavities is lead to an ad hoc aperture; it goes along a kind of airway and gets broken against the inferior edge of a rectangular aperture. The superior edge of this latter, folded and bulging, hosts the lip of the player, whilst the portion of the device below this aperture covers the chin. The player's mouth stays open.

Therefore, the air motion shows a certain analogy with the one produced by the bevel fipple flute; the buccal cavity acting as the vessel of the ocarina, the sound acuity results of the air pressure and of the different opening degrees of the cavity: the sound is all the sharper that the mouth is more open. The range of the nose flute spread in average over two octaves and a half, starting from A 58. It is obvious that it is on the player's ear and his skill that depends accuracy, any intermediate note between the two extreme being possible.

So, the instrument is well described, in the shape, usage and acoustic behaviour. We also learn that the Austopfon has a lip rest.
As a first organological classification, it is also interesting to check where Mahillon sorted the nose flute: Appareils Divers ("Miscellanous Devices"), meaning not in the flutes section, but neither with the whistles. 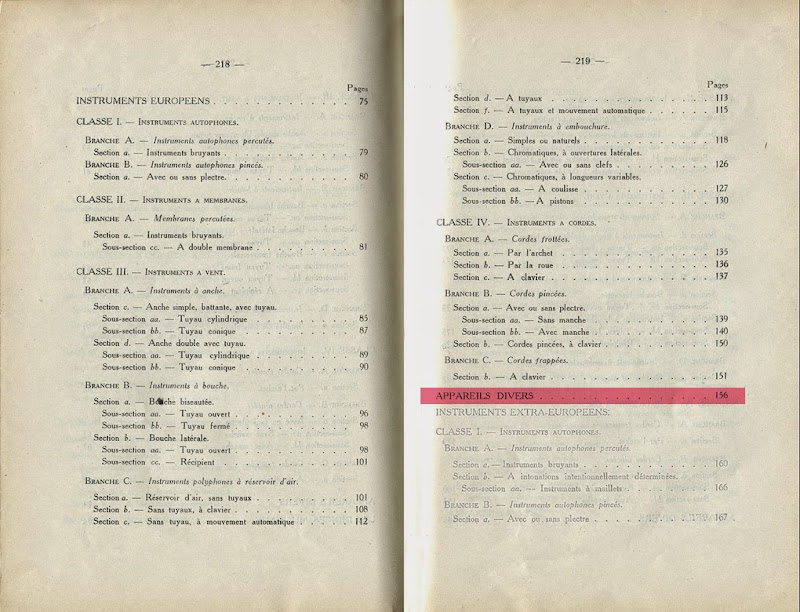 The shape of the Austopfon is peculiar: on one hand, it is "very German", because of the rectangular side flaps without rivets, soldered after a small extension of them had been inserted in a little slot and folded on the back. This feature is visible on any of the tin German models (1st version Wunderflöte excepted, which flaps are quarter round): 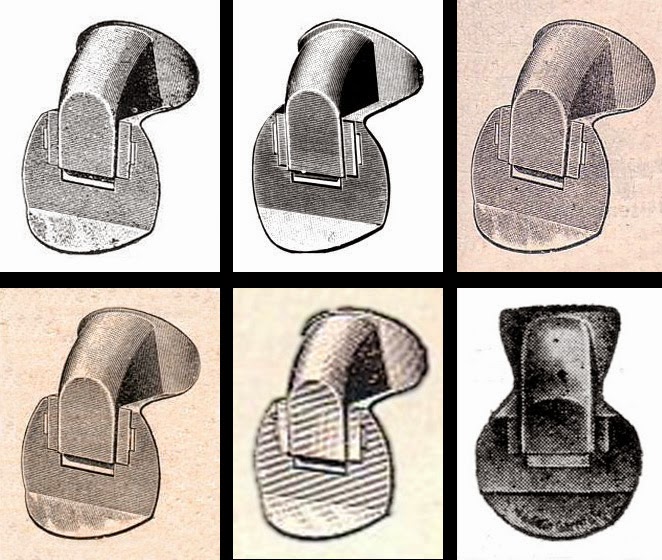 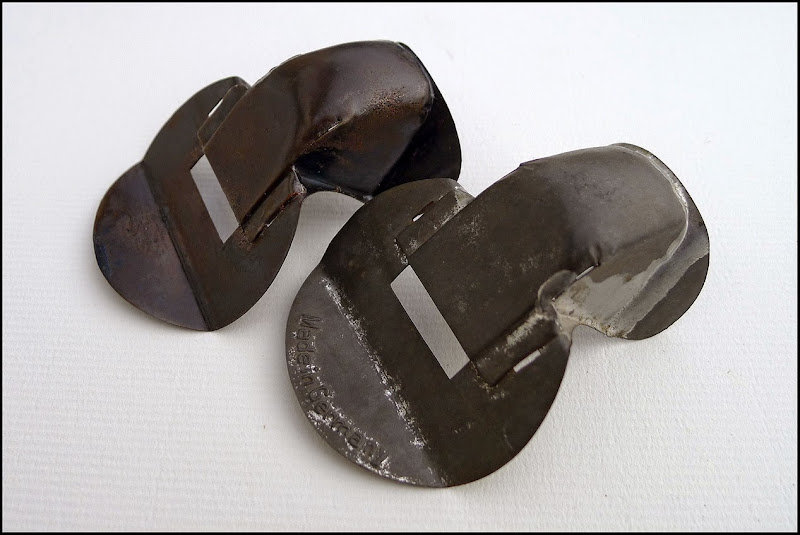 But on the other hand, the plane part on the top of the airway is longer that the other German models. More, the mouth shield is larger. In fact, on the airway and mouth shield points (but only these), the Austopfon looks very similar to a 1925s Humanatone!

Well, I ordered pictures from the MIM... 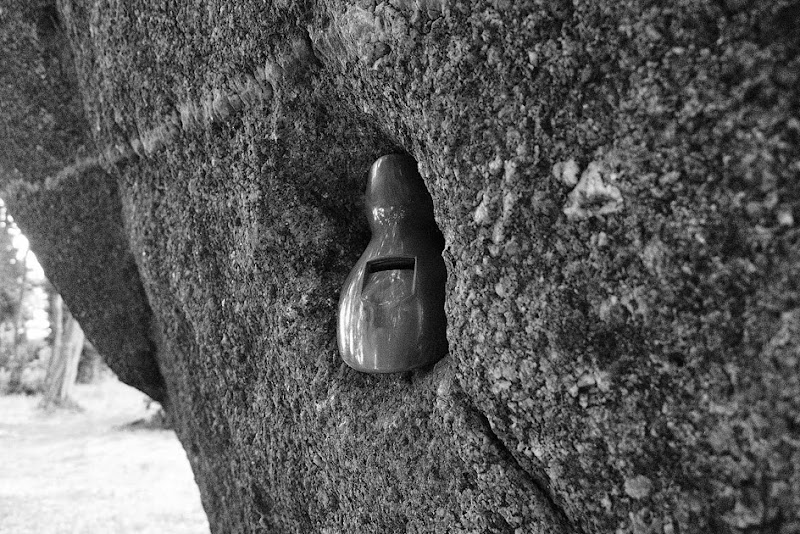 A very short video by the Incomparable Nosy Diva, shot last Summer in France, at the menhir of La Tiemblais (Saint-Samson-sur-Rance) 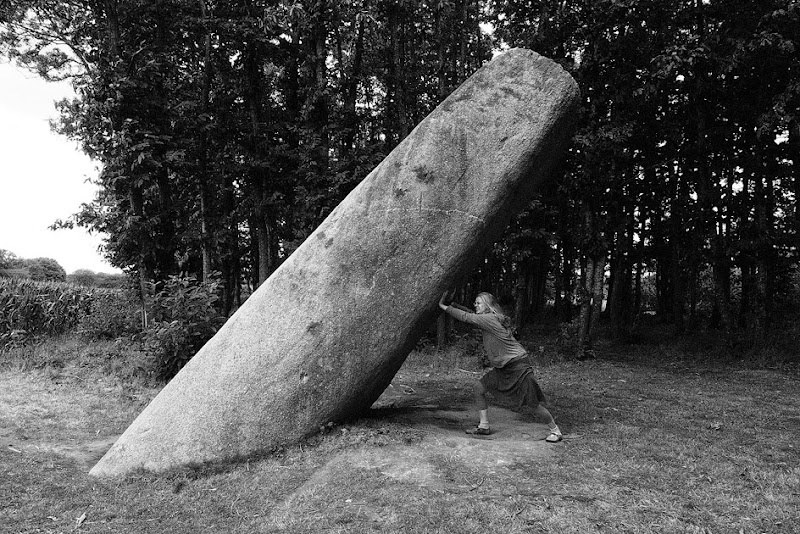 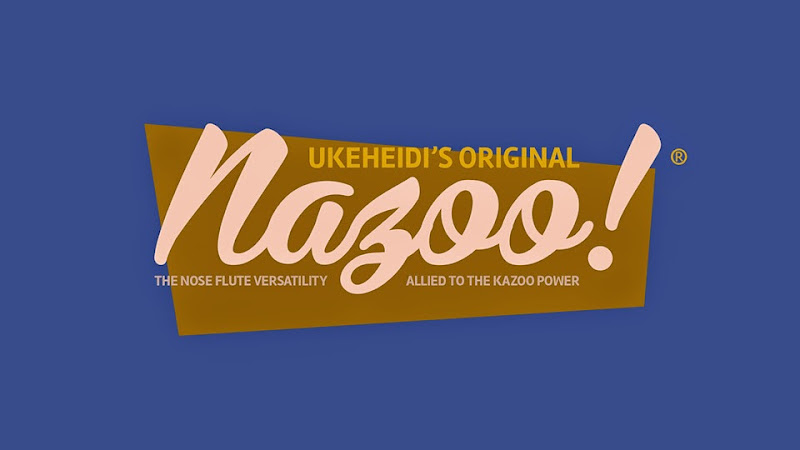 Rather excited by the idea of a nose-flute/kazoo (see this last post), I decided to try to build one. So I took a regular Schwan Nasenflöte, and a plastic kazoo equipped with an horn amp (kind of a reversed ear trumpet).

I cut a small disk on the base of the nose flute airway, with a circle cutter, then sanded a bit the countoured text and logo. The nose flute was ready. 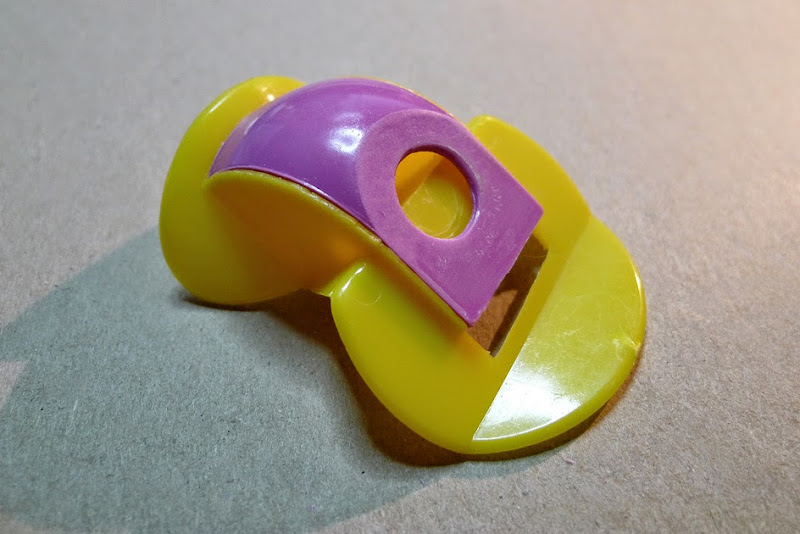 There was a little more work on the kazoo, in order to get the whole small vibrating cylinder and its elements. I sawed roughly the area, then closer to the chimney edges, then filed, then sanded, then buffed. Finally, I was able to glue the cylinder on the nose flute, put back the waxed paper disc and the cover over it. 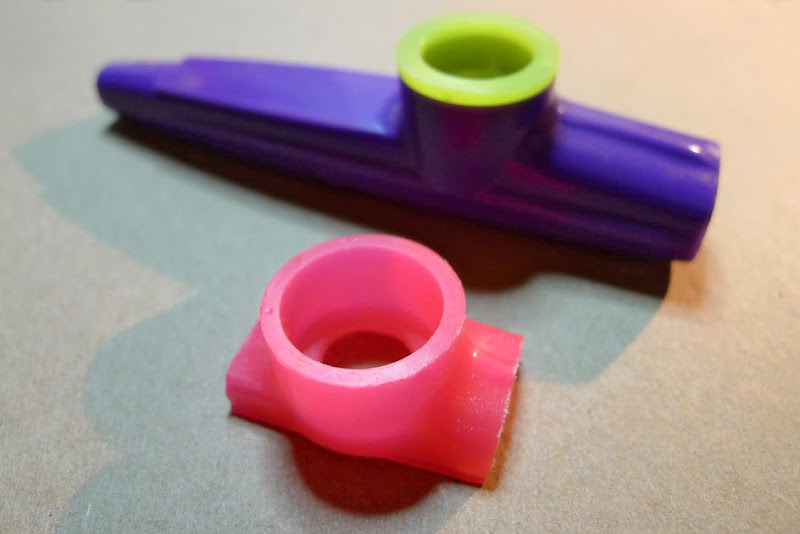 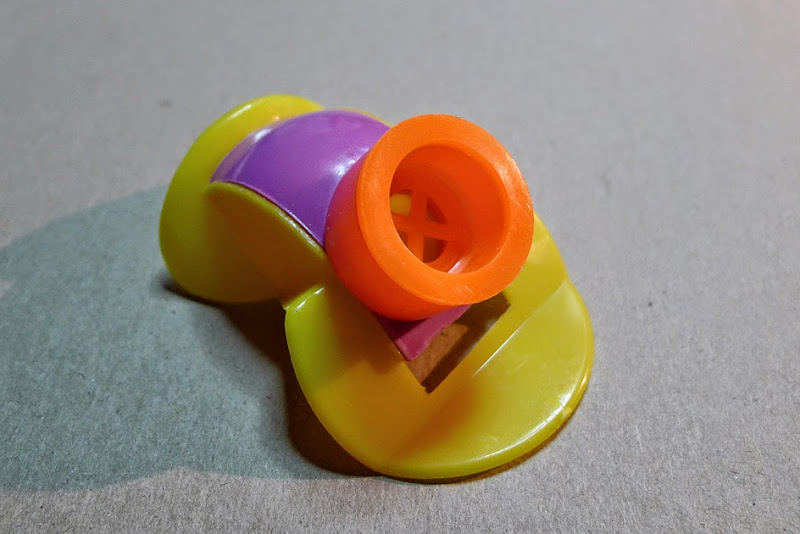 Job was done! The Nazoo was born! 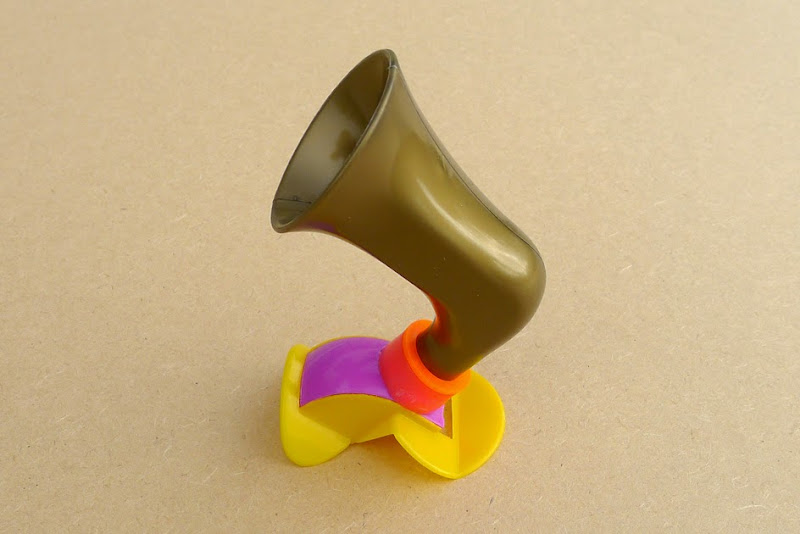 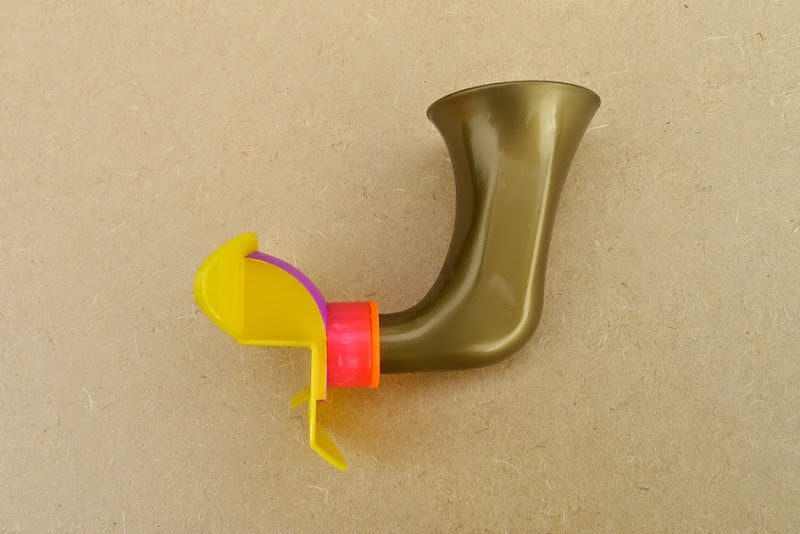 A rather funny instrument... And last but not least, the trumpet amp provides a vert good grip, and makes you look like Siegfried blowing his horn! 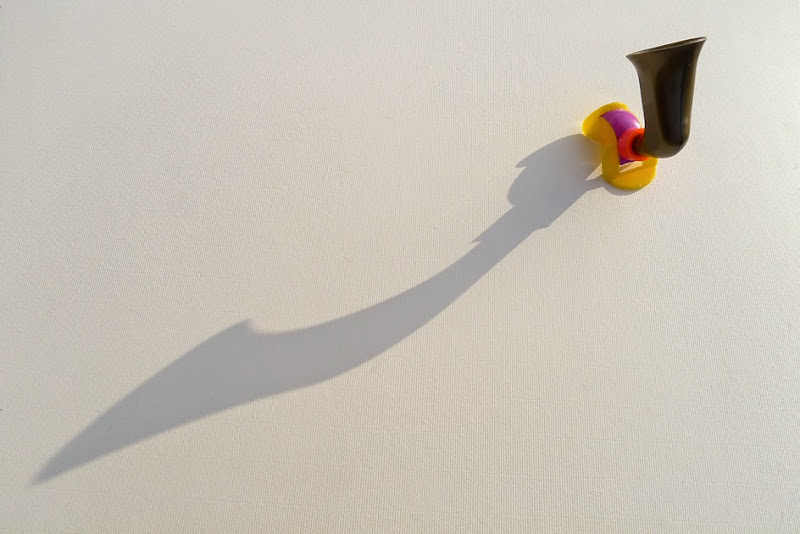 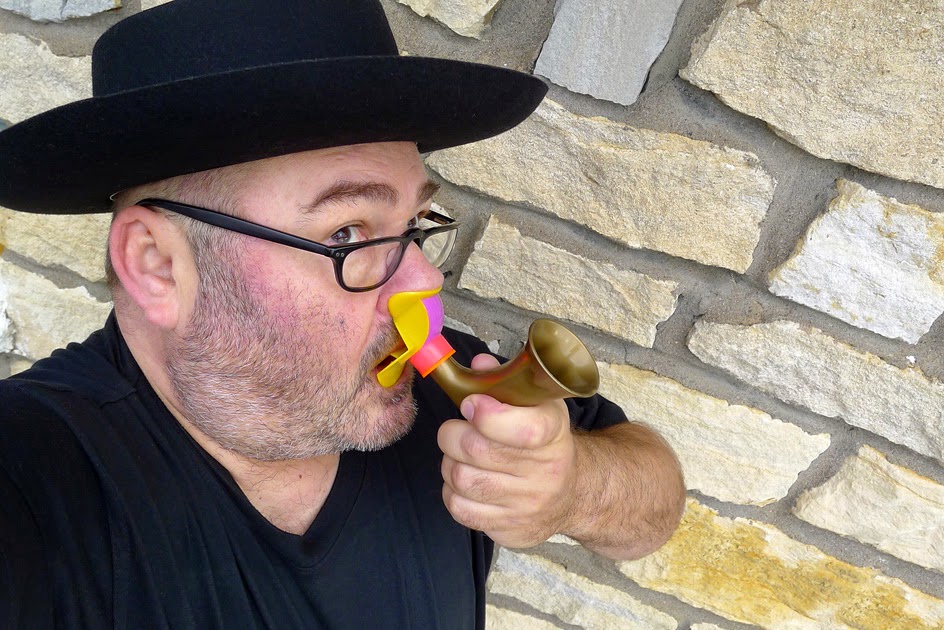 Oh! And does it work? Well, to be honnest, using the kazoo by blowing through the nose doesn't produce an impressive sound (nose breath is not powerful enough to get the whole vibrating potential of the waxed paper), but I let you judge by yourself:

While making researches about Harpo Marx and his possible nose fluting (see this post), I incidentally found a text mentionning a curious instrument.

The book Crossed My Mind - A Boy in Hurtsville was self-published at Balboa Press in February 2014, by Fred Hewison. « These are Fred Hewison’s random memories of his boyhood years while growing up in the Sydney suburb of Hurstville ». Fred Hewison was born in 1933 and lives in Australia.

Here is a quotation of the text that retained my attention:

In this anecdote, the author describes an instrument that was called nose flute. Aluminium made, apparently shaped as a nose hood, extending downwards to cover one's mouth; there being a split to allow the instrumentalist to breathe. More: Unlike the more conventional wind instruments, the sounds were generated by the exhalation of air through the nose.

Until there, the description could have been the one of a tin Magic Flute, excepted for its aluminium make. But then, Fred Hewison continues: [the nose breath] was transferred to sound waves by a piece of tissue paper within the flute that was required to be replaced at regular intervals. The author also adds that the notes emanated from the throat area and that playing this nose flute was like singing through the nose.

This really sounds like a kazoo, a nose blown kazoo! As you probably know it, a kazoo is a cigar shaped tube in which the player "hums" a tune (with his mouth), in order to induce the vibrations of a cellophane or waxed paper membrane that amplifies and distorts the melody. There were other instruments (or shapes), working on the same principle, notably the Hum-a-Tune or Fanfare, the famous french Varinette (see this post) or many other funny ones.

But I had never heard of nose kazoo... I mean: yes, it is easy to find gentle lunies who play their (regular) kazoo with their nose, like some people do with a mouth harp, like the famous Ignatz Topolino or Benson Prabahkar Anchan. But a kazoo devoted to nose breath?

The thing is, according to Fred Hewison, that the instrument he describes seems really to look like a nose flute: a nose hood, a mouth kinda-shield and a split in front of the mouth.

Well, I sent a message to CaptainKazoo, the kazzo expert, to ask if he already heard of this oddity. Howard gently published a "Zooz Nooz" to call for info among his readers.

I also sent a message to Mr. Hewison's publisher to ask to get in contact with this author.

Just another ad for the Humanatone, coming from the 1924 Heaney Magic catalog. It is very different from the advertisement this magic items company published the same year in Popular Mechanics (see here), and which was hand drawn.
This one gives more room for the text, directly copied from the Humanatone Co. user manual. 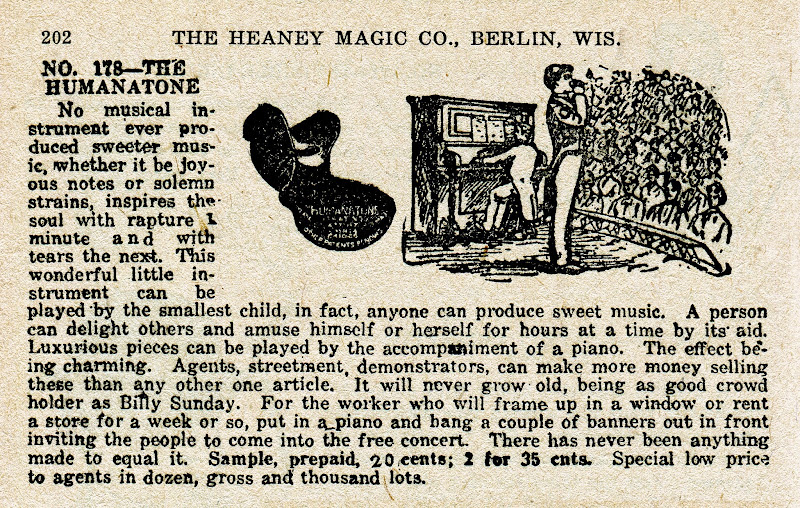