Made in the wild with a knife

A new video by Taschenmesserbuch. We previously showed this video in which Mr. Felix Immler plays a wooden nose flute made in the wild with just a Swiss army knife.

Now, this book author has made a long video in which he shows how to make such a Nasenflöte. The making begins at 2'45".

One month ago, we posted this video made in Bremen (DE) in which a German singer plays a stunning nose flute solo on Ain't No Sunshine, by Bill Withers. 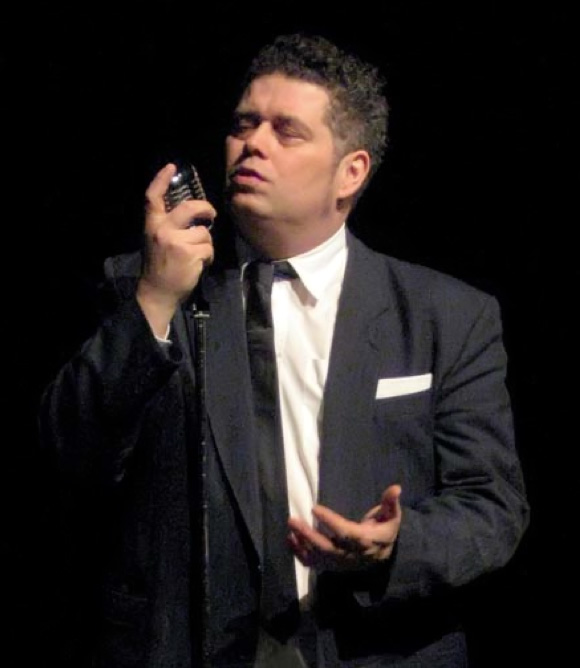 Hans Christian, can you describe you in a few words?
My Name is Hans Christian Klüver I'm 43 years old and I am a musician with both, body and soul.
I was born in Hamburg and raised in Bremen.
At age of 6, I  learned playing the recorder. Two years later I began learning to play the clarinet, wich I did for about nine years. At the Age of 15, I got me my first altosaxophone. When I was 14, I founded my first Band "Blues and Boogie Jammers". Being fascinated in all the instruments my bandmates were playing I began learning most of them myself autodidacticly.
Right now I'm playing (in order of fun & skills): singing, noseflute, the drums, bassguitar, percussion (mostly bongos), guitar, keyboards/pioano. Also I am working as a DJ, teaching music and coaching bands, theater, entertainer/conferencier

Are you a professional musician ?

Yes I am a Musician and particular Band Coach / Instrumental teacher.

Where do/did you perform ?

Most of the time I am booked by companies or private people. Also I am performing at clubs, theaters and so on ...

What music do you play/sing ?

There are so many great genres and ways to sing, play or hear music. When I do perform, it's mostly swing, jazz and great evergreens. A speciality of mine is to write german lyrics for swing- and jazzstandards. Also I use to vamp lyrics while I am singing scat-like solos.
And of course my noseflute - I myself have never seen someone else perfoming with this instrument in a decent way. So I was really impressed by the japanese guy playing the marche turque - way beyond, how does he do that. Especially the third part with the continiously played semiquavers!
Having been (and still being) a great admirer of the Beatles, I also once had a Beatles-Band (http://hckluever.de/hans-christian-kluever/musik.html) in which I played the guitar and sang. 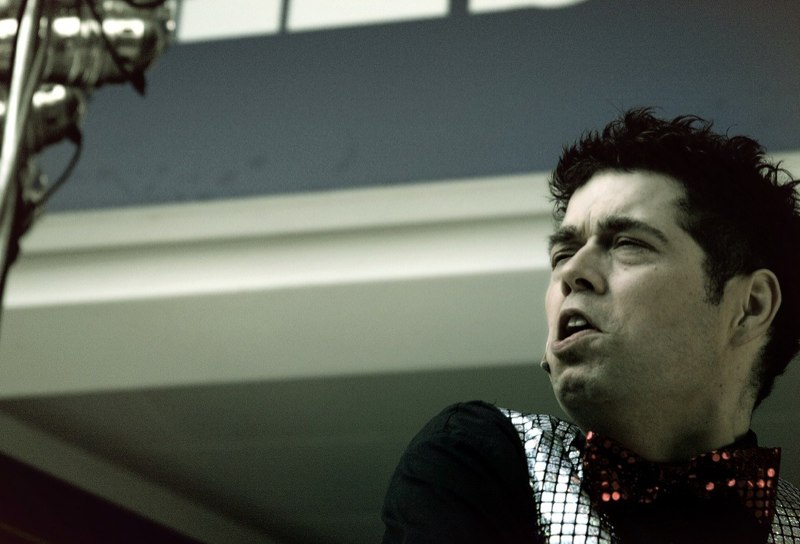 You sing greatly, and you also play the nose flute : How long have you been playing it ? How did you discover it ?

Thx a lot! :-) I don't know. I began playing it about maybe about 17 years ago. Somebody gave it to me on party. And I immediately noticed, I could play it.

Do you often play solos with the nose flute?

Depends on the type of project or perfomance I am playing - but I'd say about 2 of 3 shows, about every third or fourth song.

How do the audience react when you get your Nasenflöte out of your pocket and play ?

Amazed, amused and entertained. Cheering, applauding. It's always great fun for both, the audience and me.

We saw a video in which you play a great blues solo with the Teachers' Band, how did that happen ? Do you teach in Heligoland ?

Have you recorded other videos or songs with the nose flute ?

Not until now. But I will within the next weeks - and I will let you now, if you like.

Have you any project with the Nasenflöte ?

I do play the Nasenflöte in most of my projects. Right now I am developing a Solo-programm, singing las-vegas-swing-classic and entertaining by telling funny things.
The Nasenflöte is also about to become a part of it as I noticed, the audience is more and more enthusiastic! And to be honest - your Mail also encouraged me to envolve my nosefluteplaying even more.

Email ThisBlogThis!Share to TwitterShare to FacebookShare to Pinterest
Libellés : bands and musicians, Germany

Enhance your flute - Part I : The Humanatone

By the past, the Humanatone nose flute, which was sold by the Fred Gretsch Mfg. Co., was made with injected polystyrene, a hard and breakable plastic. The shape was designed in accordance of this resonant polymer, and so were the technical specs. Why did Grover-Trophy Music change to a softer plastic ? I don't know... generally this happen for cost reducing.
Anyway, when they began the production with this softer and bad quality plastic material (PVC?), they didn't modify the moulds. And the air duct and labium specifications which were adapted to the hard and vibrant polystyrene, went off the "best setting range".

The most usual criticisms against the current Humanatone is that it produces a weak and hoarse whistling. Some other players don't like it's tone range. This is mostly attributed to its too broad mouth hole, too thick air duct, and the absence of a real "blade fipple". Some Japanese players made experiments with cellotape in order to reduce the mouth hole, and it gave some correct results (see here and there).

What we present here is a more significant modification, more permanent, yet made in less than one hour. The idea was to improve the power, the range, the precision and the clarity of the sound.

First I cut a little piece of aluminium in a 2mm thick plate, and filed a bevel. Then I filed the rear side of this future blade in order to create a little step just besides the part of the labium that was designed to inset the mouth hole. I just glued the new aluminium fipple with a bi-component glue.

Then, I cut a peice of cardboard fitting the air duct and stuck it on the "front internal side" of the flute. This was made in order to gently narrow the air duct (the cardboard could have even been thicker), and thus increase the air pressure on the labium and the power of the sound.

The result is a enhanced Humanatone. The new sound is clearer, louder, more precise and with a better attack. 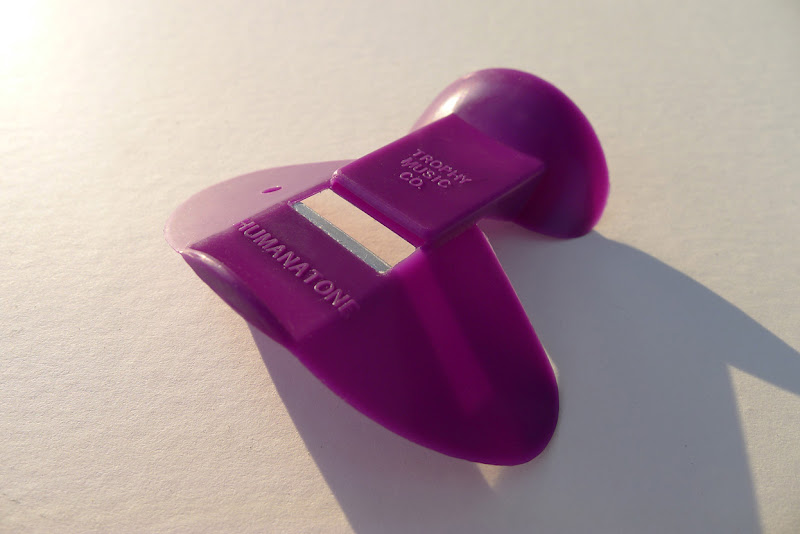 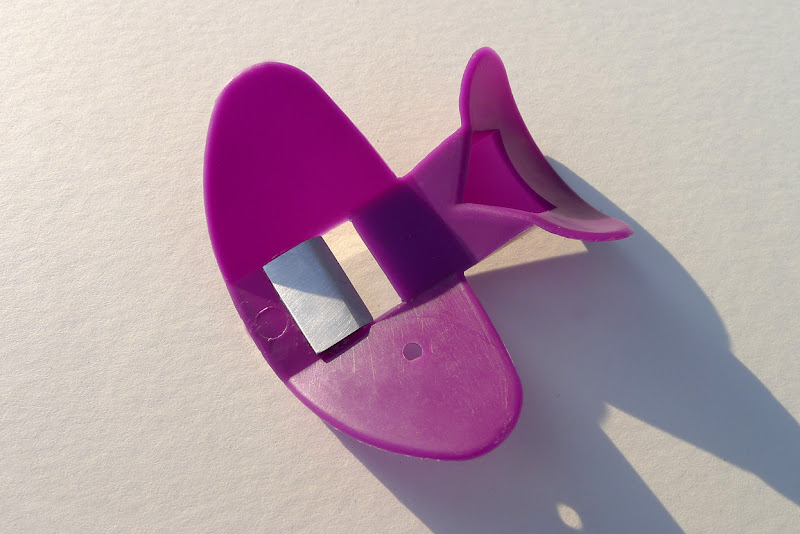 Here is a little sound sample of a regular Humanatone immediately followed by the same excerpt with the improved flute. The recording conditions were absolutely the same and I took care of trying to blow with the same strength (the improvement is patent, thus not totally palpable with this mp3).

Super(TallPaulNew)man plays a "trippy groove" on the Humanatone, with an interesting hand technique!

Email ThisBlogThis!Share to TwitterShare to FacebookShare to Pinterest
Libellés : bands and musicians, Humanatone, technicals, United States of A., vibrato and tremolo, videos 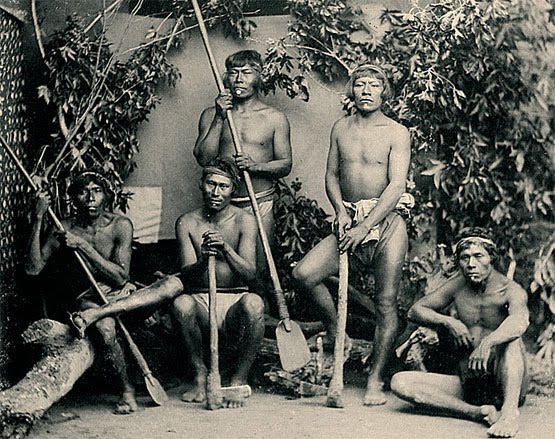 The Guarani people live in Paraguay, southern Brazil, parts of Argentina, Uruguay and Bolivia. Their demographic dominance has been greatly reduced by European colonization that happened in 16th century (they were 400.000 at this time and are now 30.000). Now, they've got more and more westernalized, and have been despoiled of their territories by deforestation in order to implant soy culture and cattle ranches. They are killed by the farmers, and hundreds of them commited suicide during last years. Their survival is a matter of time.

The birds have always had a great importance in their life, myths and shamanic practices (you can read some examples here). That's the reason the movie dedicated to them was called The Birdwatchers.

One of their handicraft specialties is the making of bird calls. They probably invented the first nose flute which pitch is driven by buccal cavity (the model that is now known as "Vietnamese nose flute", but which shape was certainly imported to Vietnam, as traditional nose flutes from this country were finger-holed).

I found one of their nose flutes. It certainly is not an ancient one, but it is authentically made by the Guaranis. It is very roughly made, is not my best nose flute (!) but it works, although probably "bird-calling oriented", and not "opera-performance dedicated to". 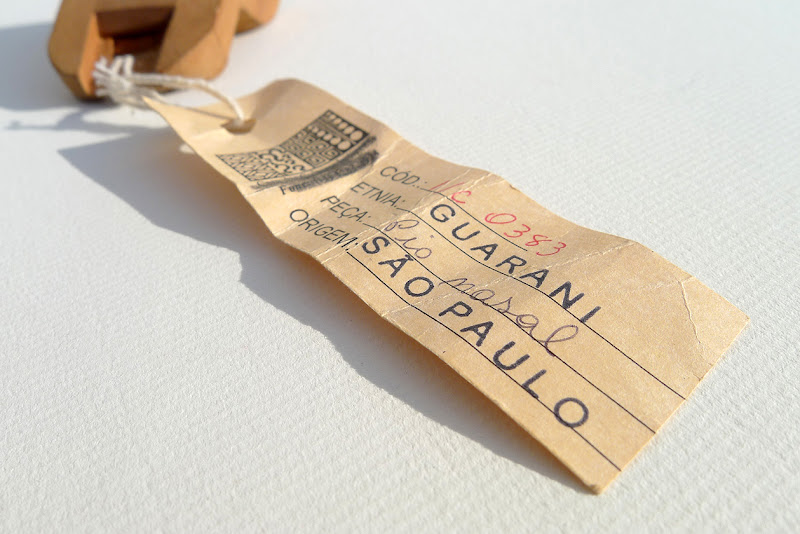 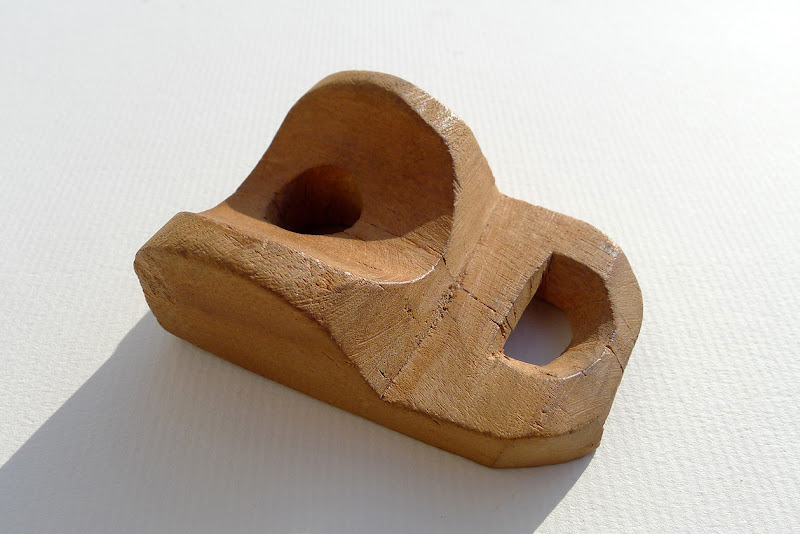 Here are two sound samples, the first one is some test of how could sound a bird calling with this nose flute, and the second one a short recording of the Nosy Diva playing El Condor Pasa (sorry, it's from Peru and not Paraguay...)

If you want to support the Guarani's struggle for existence, you can donate here.

Here is a video showing Guarani's "home"-made instruments, but no nose flutes (and others here) :
Publié par UkeHeidi à l'adresse 3:16 PM No comments:

I must admit I didn't understand much, or let's better say that I'm not sure of the accuracy of the info that are following. My concern is that I tried to reach Mr. Akio Takamura and failed. So, here is what I assume, but cannot confirm (and if a reader can bring more precisions, he'll be welcome!):

Akio Takamura is a Japanese artist from the Saitama province, who makes/made beautiful nose flutes colorings on clay nose flutes made and provided by Morinotami (Nature Factory - Forest Tribe). 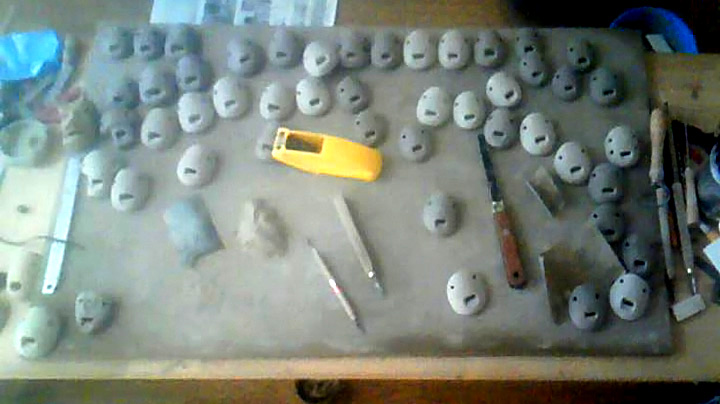 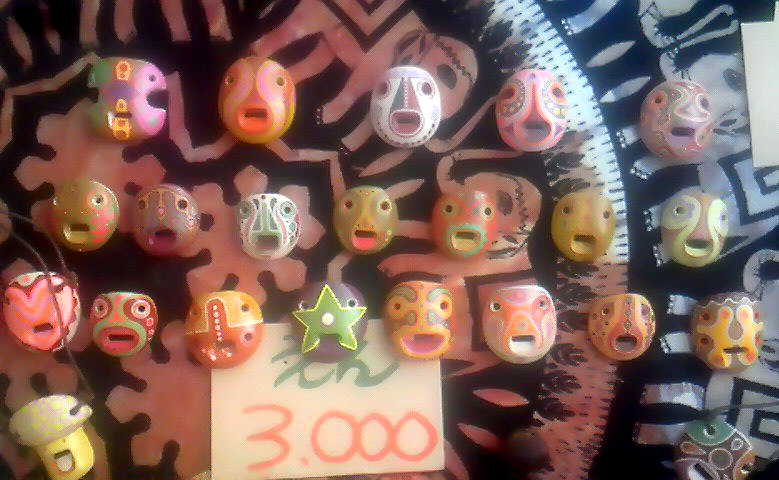 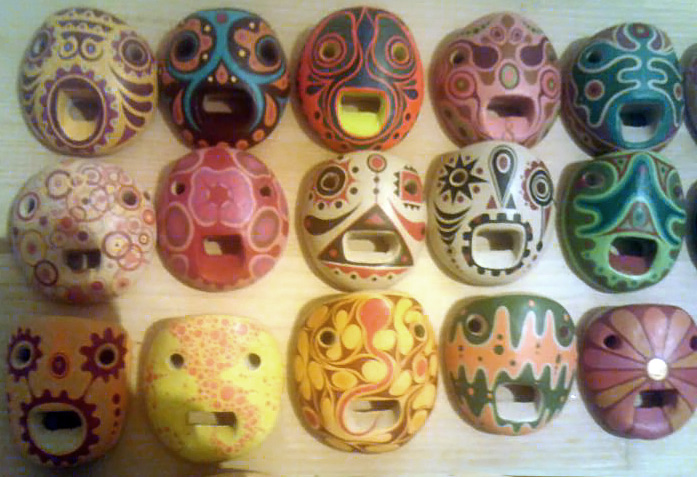 And Akio Takamura painted his own ones, with more stylized and modern patterns : 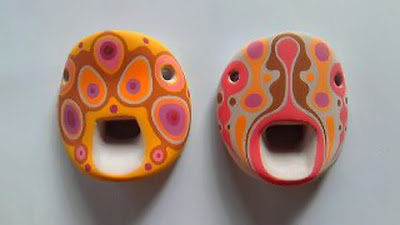 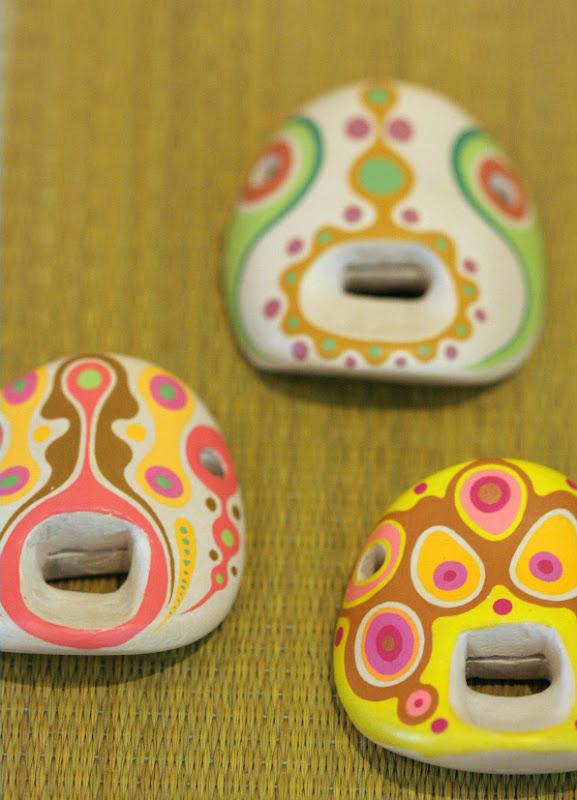 Byon Kay is a Japanese musician specialized in jaws harp, but who plays also other small instruments, including the nose flute. He generally performs alone on stage, but uses a loop pedal in order to create different "layers" of improvised music. He also sometimes adds sounds of nature, birds, frogs, ...

In this video, Byon Jay mainly plays the jaws harp, but also includes some nosefluting. There is a presentation of our instrument from the very beginning of the performance, and the nose flute is injected in the loop machine at 2'55" (playing the "My Way" theme).