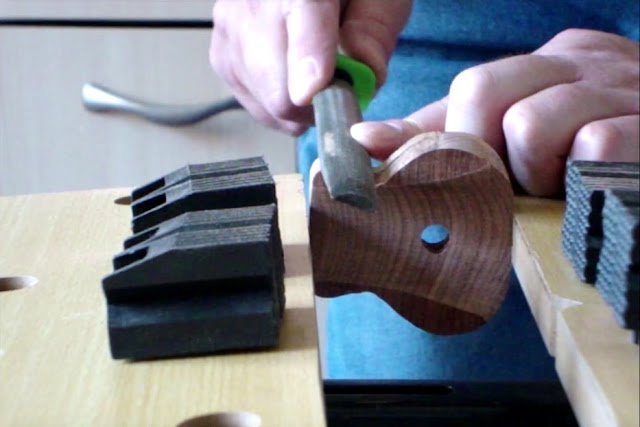 Our friend Steven Parkes builds wooden nose flutes, from time to time, just for pleasure, but also for his children. We already showed his work (check this post). And here is the #5 – for his daughter Ingrid – paired with a 3D photo and a video showing the making process.

Here is an interesting stereoscopic 3D photo. In order to get the tridimensional effect, you have to
1) open the full size picture by clicking on it
2) stand at a distance of ±20 in./50cm
3) cross your eyes (squint) in order to get both left and right images superpose 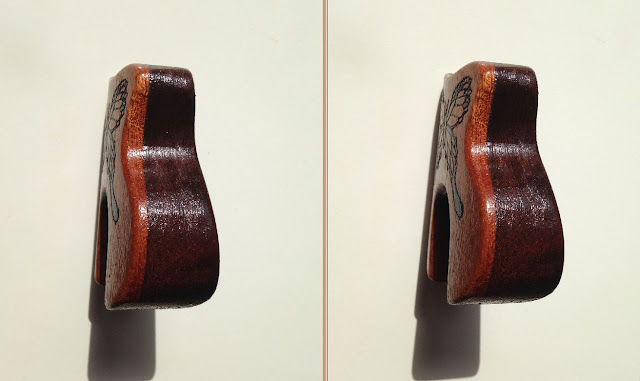 And here is the video of the making, from the design to the Tru-Oil finishing: 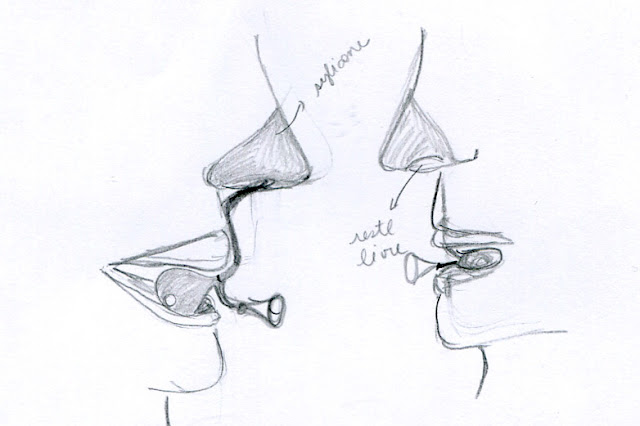 Each year, I begin the design courses I give in an engineer school by asking the students to "invent the nose flute", without pronouncing its name. They come from many countries (this year: Brazil, Argentina, Algeria, Tunisia, Uzbekistan, Germany and a few from France) but they don't know nose flutes.

I expose how a whiste blows, explain that we could get a variable tonality if we'd replace the chamber by one that could inflate or deflate. I suggest the mouth to play this role, and thus, the nose breath to blow instead of the mouth. I ask them to invent an object that could whistle this way, and to point some attention on ergonomics.

Most of the students are not confortable with hand drawing, and the results are sometimes funny, or difficult to understand. However, some propositions are interesting because they help to understand ... nose flute shape history!
As virgin in matter of nose flute, they know neither the vintage nor the modern shapes. But some of their drawings look very similar to shapes *we* know well!

It's also interesting that most of the students drew a nose flute looking like a torture – or at least medical – device, and seem not to imagine it could be a funny musical instrument that give pleasure to to player and (sometimes) to the audience.

Some nose flute that wouldn't work... 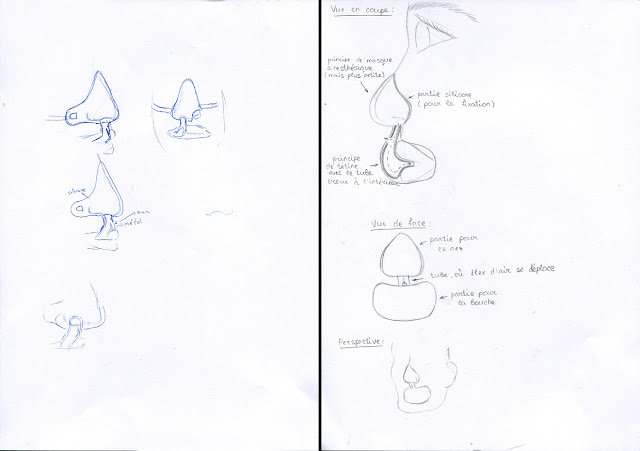 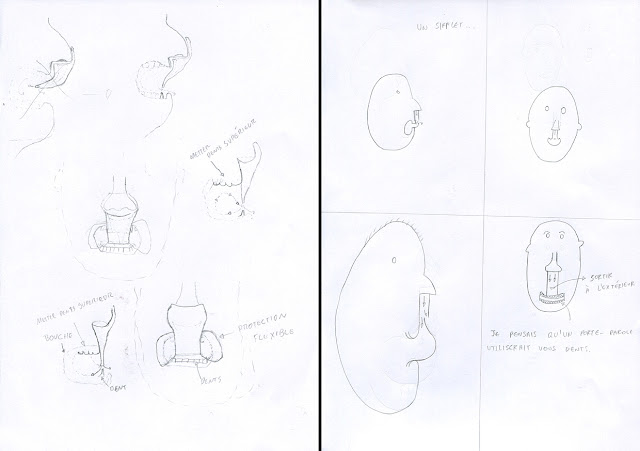 Some nose flute that would possibly work with minor changes... 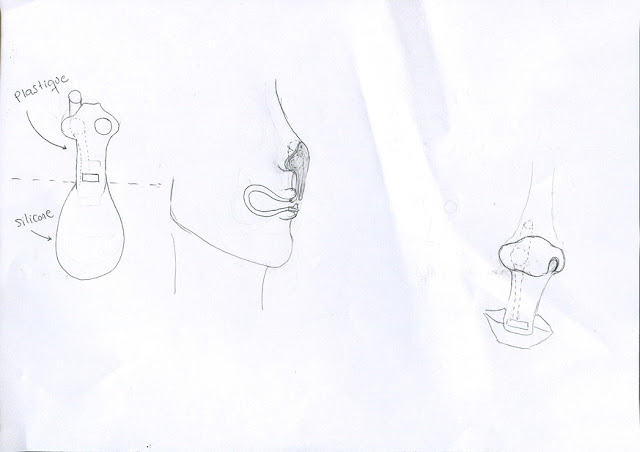 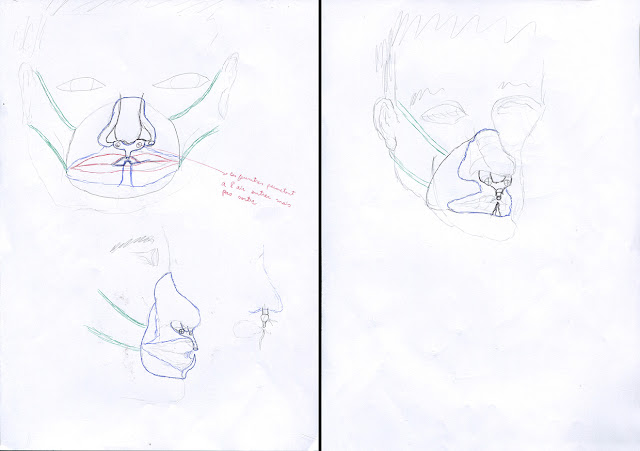 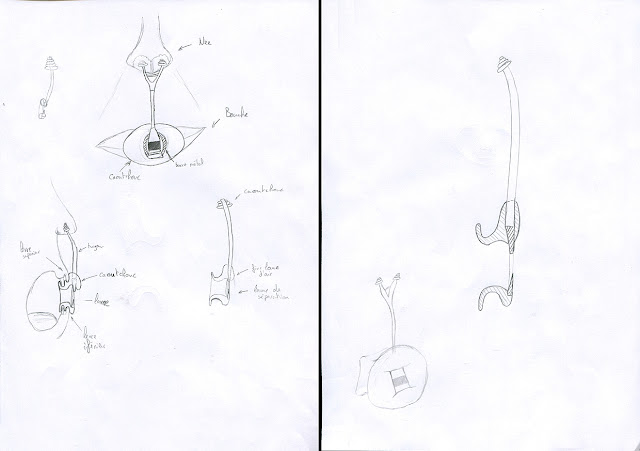 My prefered one, which doesn't look like a medical device. It looks very alike a plastic Humanatone, to which a heel handle would have been added: 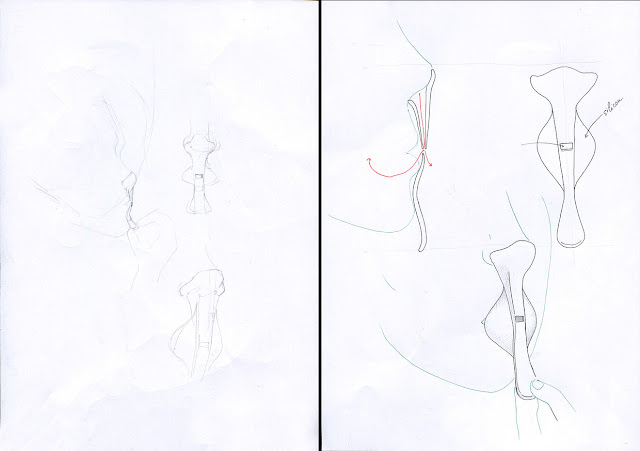 Next week, I'll show them several nose flutes, and play a bit, to prove it can be a elegant, simple, funny and powerful instrument.

[EDIT] : After having read this post, Mr. Ken Tanaka (see this post) quickly made a paper nose flute according to the model drawn by one of our students (the last picture). Here is the pieces he assembled, and the short video: 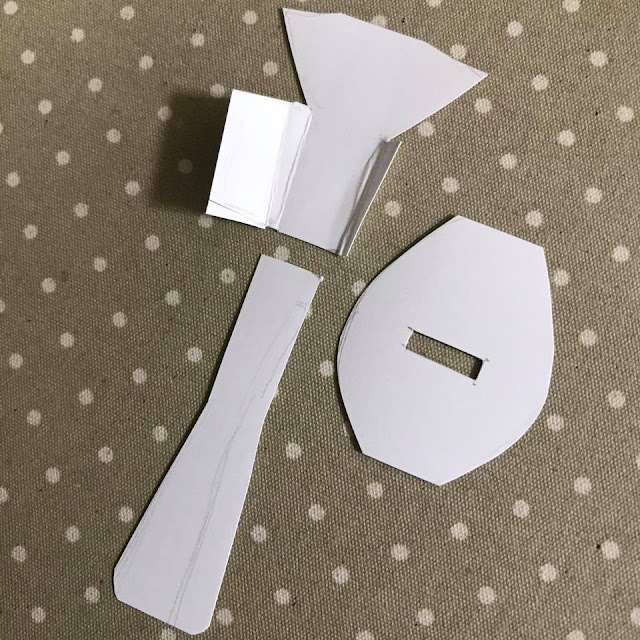 Just another mint and new old stock Hum-A-Tune (yellow, this time!). This one is so clean that even the stapples aren't rusty, and the pre-perforated hole for hanging on a display is not hollow.