In the nose flute world, most of the musicians play alone, being or not accompanied by another instrument, a guitar, like Sensei Mosurin, a violin or accordion, like the Nosy Diva, a ukulele like Will Grove-White or more exotic instruments, like a sanshin for Wataru Kousaka. Sometimes, two or three friends risk a video together, blowing the nasal whistle, but experiments of large orchesters have been rarely seen. The defunct Swedish Nose Flute Orchestra was an example born as a marketing stroke for a pharmaceutical product, and Das Original Oberkreuzberger Nasenflötenorchester is another one, on the punk side of the flute.

But was there a "professional" nose flute band with a real artistic involment? Yes! The SlappyFeatherWhistle Nose Flute Ensemble ! And better : it still exists! 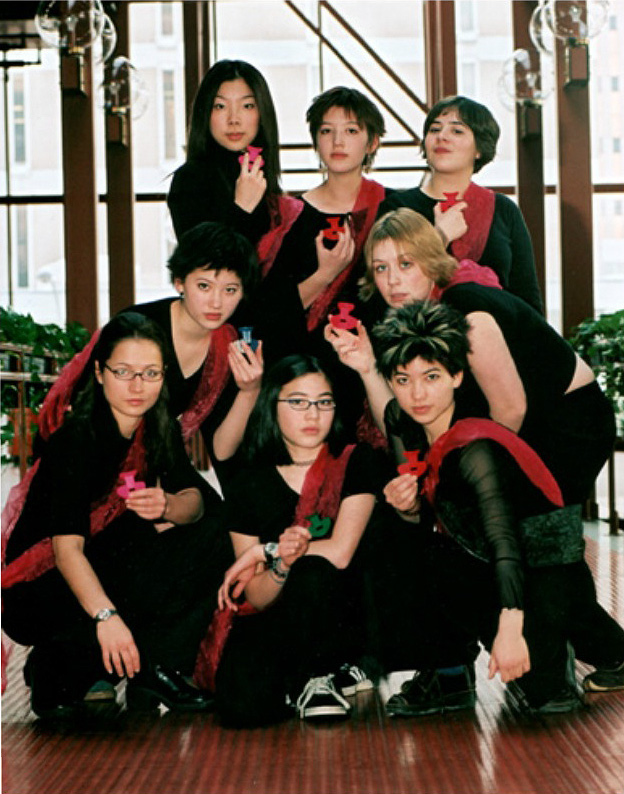 The Slappy Feather Whistle is a band mixing music (many nose flutes plus piano, cello,...) and choreography in beautiful shows. For more than a dozen of years, they have been performing in many shows (« too many to count ») in many places, mostly in Canada where they are based, have done lots of TV and radio appearances, and produced consulting and teaching for people all around the world. The Ensemble was founded by Gia Anne-Marie Felicitas, now known as Billy Kidd as a professional magician.

Emma Hooper (member of the band) wrote in 2002 : « Felicitas, a fast-talking eccentric with electric hair, founded her nasally driven ensemble four years ago “because no other instrument made [her] as passionate about music.” At first, the group was mostly made up of Felicitas’ younger sisters, who she “made join”. Their first gig was in a “boiling hot tent at a children’s festival, with an audience of about ten, all under the age of ten”. Their second gig was an infomercial for toilet paper. Humble beginnings for a humble instrument. »

Gia Anne-Marie Felicitas started her Nose-Flute training with Maestro John Ullyatt when she was 15 years old and studied the nose flute history and legends with the ethnomusicologist Randy Raine Reusch. Let's say that Gia regards our noble instrument with seriousness and respect.

« People think of the nose flute as a big joke. It's a pretty unusual instrument, people laugh, but what they don't understand is the whole history behind it, so when we got a whole group together, people start to take it more seriously ». 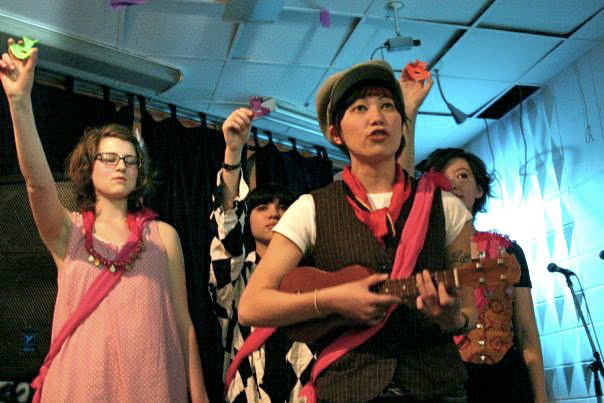 Emma Hooper : « Despite lowly beginnings, Felicitas’ noseflute-preservation message has begun to spread, and with it, the popularity of her group. The ensemble soon expanded to eight full time members and several part-timers. (And that’s not counting the pianist, cellist, saxophonist or rainstick-player they cart around with them.) They have appeared on several high-profile television spots, recorded professionally, and preformed in some of Canada’s leading concert halls. So why the sudden appreciation of a long-dormant musical form? »

Gia Anne-Marie Felicitas : « What we do is simple. We begin with an introduction to the instrument. A speech which I give, while the group does choreographed tableaux in the background. Then we pass Kleenex around the audience, in case anyone gets sprayed. Then we play…. The audience is generally struck stupid. They can’t believe such beautiful, moving music is coming out of our noses. There’s almost always a gasp or two. That is why I love my job. I believe that no instrument capable of such beauty should be ignored by the musical world. My goal is to pursue this cause until the Noseflute is accepted into the pantheon of noble musical instruments. And I hope to educate as well as enrich the lives of people musically at the same time. » 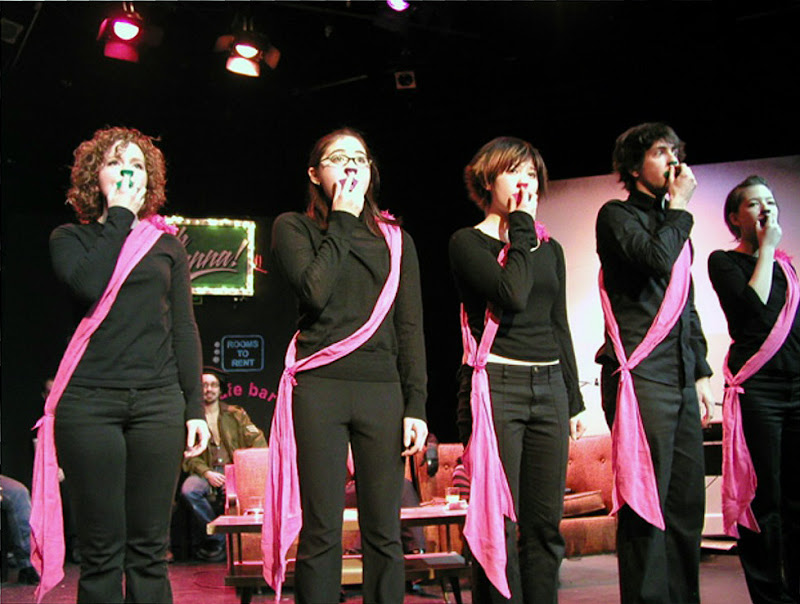 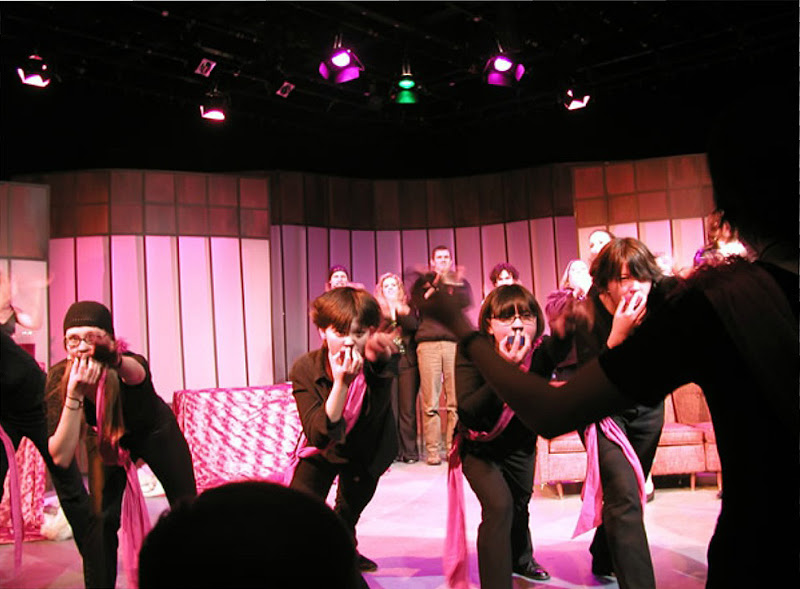 
Interview
Gia Anne-Marie Felicitas kindly accepted to answer our questions, and here is a short interview :


- When did you begin to play the nose flute, and how/why did you come to that instrument ?

- I was introduced to the nose-flute when I was 15 years old by an Edmonton Actor named John Ullyatt. I was acting in a production of The King & I at the Citadel Theatre, John showed me the nose-flute and I thought it was one of the strangest coolest instruments I have ever seen. I instantly took it up and started practicing every day.

- When did you decide to create the SWF Nose Flute Ensemble? And when/how did it start ?
- Every Halloween I come up with a very interactive costume so that I can generate more candy from my neighborhood. One year I went out as Reusable Toilet Paper. I wrote a theme song and gave out samples as I trick or treated. The response from my neighborhood was amazing! So I thought I would actually invent Reusable Toilet Paper and make millions of dollars. So I wrote a commercial, gathered my friends and we filmed a video advertising Reusable Toilet Paper. In this video I had trained my friends to play the nose-flute so that they can play the Toilet Paper theme song.
We had a big screening and when the Q & A started the audience was only interested in the Nose-Flute and not really the Toilet paper. This sparked my first idea of creating the Slappyfeatherwhistle Nose-Flute Ensemble.

So I did tons of research on the nose-flute. I travelled to Vancouver and met up with Ethnomusicologist Randy Raine Reusch and he educated me immensely regarding this instrument. I got to play real bamboo noseflutes that Randy had collected in his travels. I was inspired by the history of this flute and the fact that it was regarded as a novelty. After my research I gathered up who I could, and we started rehearsing once a week for 2 hours. Within a few weeks time word had spread and we were invited to play at the Winspear Centre Music hall in Edmonton. This was a very big deal. And ever since then the gigs started rolling in. We got a lot of attention from across the globe with our choice of music and choreography.


- How was it "received" by the public ?
- The public loved us. Although I dont think they knew how to handle us. We made sure that in our performances we never smiled or laughed. If we did the audience would think we were not serious. I guess by this style of performance people thought it was hilarious. But we never broke a smile... Ever! We got invitations to perform for David Letterman, Jimmy Kimmel, Jay Leno, and Canadian Mike Bullard.

Here is a CBC Radio broadcast with Eva Marie Clarke :

- What was your repertoire ?
- For some reason Jewish folk songs sounded really good on the nose-flute. So we played lots of folk and classical. From Mozart's Symphony # 40 to Beethoven, to James bond theme songs.


Here are 3 (thank you Gia!) delightful recordings by the SlappyFeatherWhistle Ensemble :

Round The Dreidel Spins (Hannukah song) :

- Were the "roles" distributed in some way or all the musicians were used to equally play the same music line?
- The roles were distributed. Everyone I auditioned. Playing the noseflute has a lot in common with one's singing voice. Just like a choir I would place people in their appropriate position. Soprano or Alto. Group 1 or Group 2. Sometimes we would have a 3rd sections as well depending on the music.

- How many shows did you perform? Were they only in Canada or were you invited abroad ?
- We did a lot of shows every year. Too many to count. Most of them were in Canada as we were based there and its difficult to travel with so many members. Also I was in theatre school at the time so juggling schedules was tricky as well. We did lots of television appearances and radio. Also consulting and teaching others from as far as Japan to Africa, USA and the UK.


- When and why did the SWF stop ?
- We haven't really stopped but we just take random gigs now. Mostly due to the fact that I also work professionally as a magician and I'm not in a single place for more than a month.


- Do you have some histories/anecdotes to tell us about the SWF or about nose flutes ?
- Nose flutes are not an instrument to be scoffed at. They are a traditional instrument that was mostly played in S.E. Asia and Hawaii. People played them for many different reasons. Sometimes they played the noseflute to gently wake up their kings. Sometimes it was to help make the rice grow. And other times they did it to court the one they loved.


Thank you a lot, Felicitas, and please keep the SFWNFE alive!!! 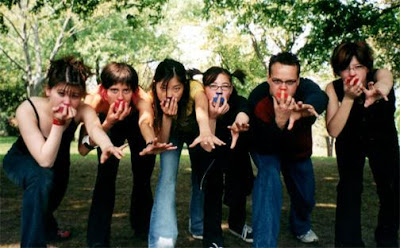 And last but not least, 2 videos (no less!) : the first is a presentation of the SlappyFeatherWhistle, and the second is a cut of « Rare raw footage of behind the scenes when the Slappyfeatherwhistle Nose-Flute Ensemble flew to Toronto » :