Estimating the date of a vintage nose flute is not an easy task, and particularly when it is an tin Humanatone, because this best-seller spread its supremacy during 35 years. But what exactly are we talking about? Dates of production or dates of sales?

In this not definitive attempt to give means of estimation, we will look at the shape of the air duct cover and the pair of lateral flaps, at the stampings, but also get help from user manuals when available, and advertisements published here and there.

Caution: all the dates provided here must be looked at very cautiously, as just being hypothetical. Indeed, drawing a conclusion from a user manual that may not have been printed the same year as the instrument production, and both could have been advertised and sold another year. More: are advertisments accurate in their drawings, or did the lay out of a catalog keep "the picture used each year", whether the instrument has evolved or not?

First of all, we know by the following article that the name Humanatone was already in use in 1894, and this leads us to think that it was already in use at the Columbus World Fair in 1893, certainly when the nose flute was introduced to the public. Whether it was the original Nasalette by William Carter, or already an improved model, we don't know. But it appears that the Stivers filed the brand as a trade mark only in 1903.


This might be one the first models produced by the Stivers Co., from 1903 (check here).
The stampings show:

There are no patent numbers, nor quotation marks for the brand. But the terms Trade mark are used, probably meaning that it has already been filed to the Patent Office (but not necessarily already officially registered).

This instrument should be posterior to july 6, 1903 which is the date stated by J.J. Stivers for using the trade mark (which was not registered, and even not filed yet). And it should not have been stamped this way very long, since another model appeared soon (see next).
Note that the air duct cover is nicely rounded and that the flaps are of the "bolster" shape, with a thick tin and a pair of rivets. They are not totally symmetrically placed (the upper one is lower from the top edge, than the lowest one is from the bottom edge). I don't know if this last remark is relevant, as I don't know the consistency of the placing of the rivets.


This early model still show a rounded duct top and "bolster" flaps. However, the tin looks a bit thinner, and the pair of rivets appears to be precisely symmetrically arranged.

The quotation marks are barely visible, but are there. Now, two patent numbers have appeared (the 1892 Carter's patent, and the 1899 design patent by Garrett J. Couchois). Other paptents are pending ...

This instrument obviously is posterior to the New Musical Wonder, and thus, might date after 1904 (let's give 1 year minimum to the NMW sale period).
We found an advertisement published in Brisbane (AU) that provides a engraving of the Hum' and on which we can distinguished a third row of patent number in the stampings. With a little effort, we can even recognize them, 477167, 31876 and... 641025 (the Leech & Couchois patent). [Note that on the drawing, the words "Trade" and "Mark" are set with an oblique position. This is the case in every Humanatone ad, and we suppose it was made on purpose, for the words to stay big enough to be readable).

So, we can date our instrument of before 1906 (included), without mistake. 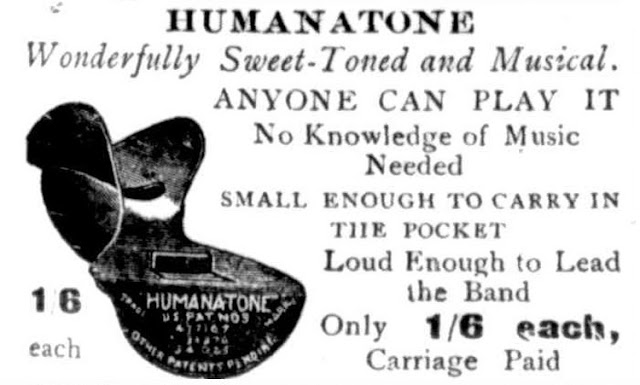 
This model is a bit "special" because it is not the basic standard model, but the "No20". I don't know exactly to what this corresponds. Is it the type of plating or the reinforcement groove visible around the mouth shield? Mystery. However, I really think that the shape of the flaps, for instance, cannot be a differenciating feature.

And this sample clearly show a new type of flaps. They are very narrow (and soldered without any rivets. This is probably the result of an attempt of the Stivers to... reduce costs and fabrication time. The further models will demonstrate that finally, they came back to riveting.

These stampings are a bit perturbing. The mention "Trade Mark" has disappeared, but the word "Registered" has appeared.
I'm not able to see if the quotation mark are there, since the top of the stamping mark is absent (the top of the characters is missing), but I suppose they virtually exist.

It still shows only two patent numbers. On the other hand, the flaps are of a new shape.
The trade mark was first registered in 1904 (August 30), but the Stivers filed another design in 1905 (April), with the "Lion rampant" heraldic figure. This new design was registered August 1, 1905.
And for this Humanatone, we have the user manual and the box, which shows the Lion (see it here)

With the "Registered" stamping, this instrument should logically be posterior to August 1905, and anterior to November 1906 (because of the Brisbane ad).


This beautiful Humanatone shows a rounded air duct cover, but a new and elegant type of flaps. We have called it the "popsicle stick". Apparently, the Stivers went back to riveting, but this time with only one on each flap.

The typo has chnged a bit, and the characters are a bit broader than previously.The quotation marks are there, and for the first time, the third patent number (Leech and Couchois, 1900) completes the list. In exchange, the mention "Registered" has disappeared, probably to clear some space for the patent numbers. Why this 3rd number was added so lately is a mystery to me (Were the rights still in discussion? Maybe because of the double property of the patent?).

We have the box of this Humanatone (check here), and it shows the Lion Rampant. This model is posterior to the previous one, and we can state without big mistake that it date at the earliest after 1906(included).

So, this instrument should date from min. 1906 to max. 1911, according that the user manual was printed in accordance with the year of the instrument production.


Here, we enter a new era, where the model is almost stabilised in his shape and stampings. The air duct cover is still rounded, but a new and definitive type of flaps has been designed (the "Pear" shape). It is derived from the "popsicle stick" shape, with only one rivet, but has a counter curve termination that joins the side of the air duct.

Obviously, the removal of the long sentence "Other patents pending" left some free space for a dedicated line to mention the trade mark, and also for an elegant little typographic fleuron at the bottom of the stampings. Why to remove this long mention ? Very probably because "no other patents were pending" :) Indeed, the model was almost stabilised, and if the Stivers filed other patents, they never have been registered.

It is very difficult to date precisely this nose flute, as we don't have the user manual, and as the box is very mean in helping us. The only things we can say is that the box is natural color (it'll get red later) and that it mentions that this is an "improved O" model (see here). Since the model appeared to get back a simple "Style O" name later, it is likely that this model dates more probably of the 1910s than later.

The advertisements in some newspapers and magazines still show the "Other patents pending" stamping until very late. For instance Popular mechanics which modified the drawing in 1928, erasing (blackening) all the stamping in its Humanatone ads. The 1929 issues of Oaks Magical Co. display also a blackened Humanatone. But even in 1931 the Chicago Musical Instrument Co. and in 1932 the Johnson Smith Co., show the whole "Other patents pending" mention in their catalogues.
So what to think ? Can we regards the drawing in advertisements as a serious source ? I think it can help in one way (appearance dates) but not much in the other one (disappearance dates). Why were changes made ? For a legal reason ? Was it like in Ellisdon's catalogue, which erase the mention "British Make", when the metal Humanaphone was replaced by a German plastic Schwan ?


This is the most spread Humanatone model, probably because this is the last model that has been produced by the Stivers, and this, during a long period of time. Its main new feature is a flat air duct cover, with a very visible edge where it joins the top curve. The flaps remain the same, but the rivets looks well centred and slightly bigger than previously.

They are exactly the same as the previous model, but the text is deeply stamped in the metal, making it even visible from the other side of the mouth shield.

Caution: the dates specified in the following tables are not the beginning and end of a period of time during which this or that feature was present, but the min. and max. limits of possible datation of the specific nose flutes displayed on the pictures. That's very different (and I'm very sorry not to be able to precise those periods).

There are only two types of duct cover. From the beggining to the 1920's, the cover is totally rounded, then a very flat surface was made on the front, creating a very defined and visible limit with the top rounded part. 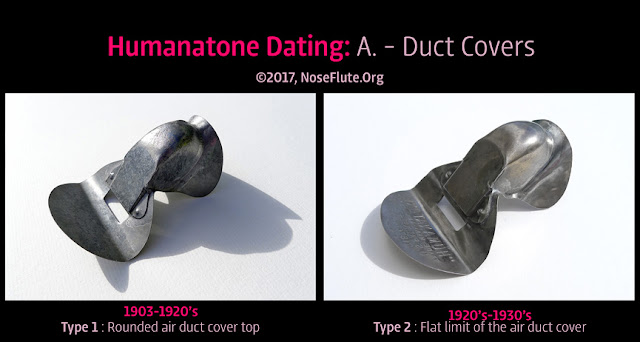 I found four fundamental different types of lateral flaps (among them, two may have had variant). The original one is the (half) Bolster type, quite sturdy on the New Musical Wonder, then a bit more refined. Then, the same type, narrower and deprived of rivets. Following is a rare type, the Popsicle stick tip, and finally, already from the 1910's, the final shape as a (half) Pear. 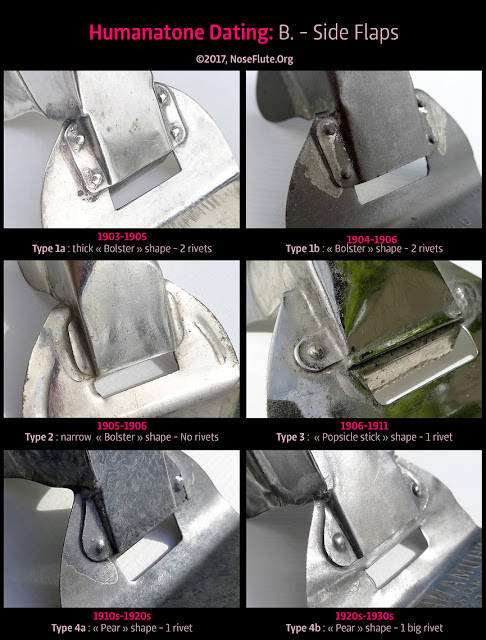 Last but not least, the stampings. I found no less than different stampings types, and I would not be surprise to discover more. After the "New Musical Wonder" version, patents numbers are always present. Two of them around 1904-1906, then three. From the 1910's, the "Other patents pending" mention disappeared. From the 20's the text became more heavily stamped. 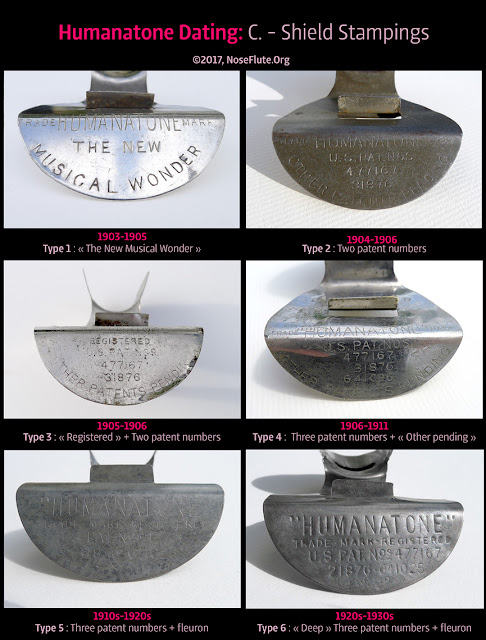