A new nose flute maker in the landscape: Kwan! And a new country on the market: Thailand.

Kwan is a young woman from the south of Chiang Mai in Northern Thailand, who's been making pottery for some 15 years. She produced different kind of dishes, but her specialty is whistles, ocarinas and... nose flutes. Those are made of a mix of clay and sand, and are neatly hand painted to resemble joyful and laughing (and whistling) little skulls.

I ordered a nice bunch of them at Ethical Bazaar, a very cool shop based in Thailand and founded by Delphine de Sanglier, a french woman at the beginning of 2014. Ethical Bazaar sells local craftsmanship artefacts.

« Yes, Ethical Bazaar has been founded by me this year, in february, and the website is online since August (...) The idea is to create a link between the buyer and the craftsman, to tell and share their daily life. (...) More and more people want to know how are made the things they buy, in which conditions and the craftsmen are very happy too to know that people use and like the fruit of their work ». 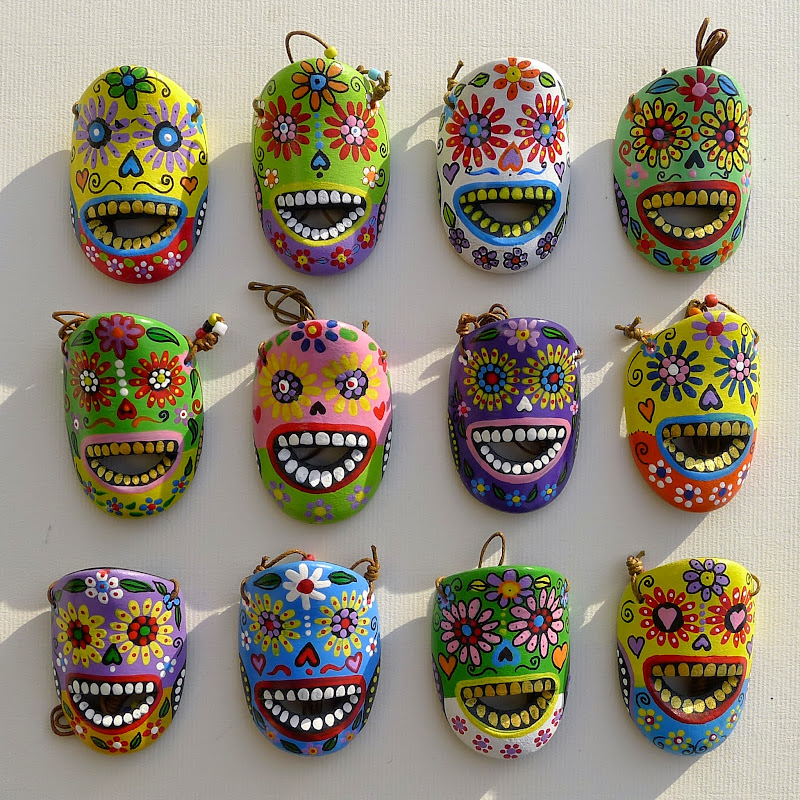 Kwan's nose flutes look very much like the small sugar skulls that the Mexicans make for the Day of the Dead, in order to honor the deceased.

« Long time ago, in Northern Thailand, the inhabitants were using an ocarina-type instrument with two holes, and the shape was looking like a skull. Kwan liked the idea to reuse this reference with the addition of flowers, hearts and lots of colors for the flutes to be pretty, look joyful and with the purpose to remove the fear of the ghosts. And the shape of the nose flute go well with this!».

I received my order rather quickly. The little nose flutes were individually packed in a cellophane sack, with a small sticker on which was printed the "user manual" with the strict minimum (but basically sufficient) instructions. 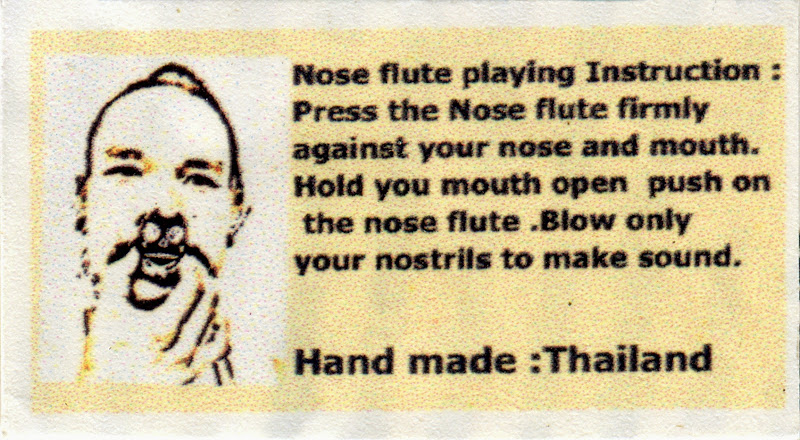 Kwan's nose flutes are small and totally handmade (no mould to shape them), and thus are truly unique. They are hand painted and provided equipped with a nice neck cord ornated with color pearls. Their back is painted in black, and it seems that they are now signed (some from my order were, some weren't). 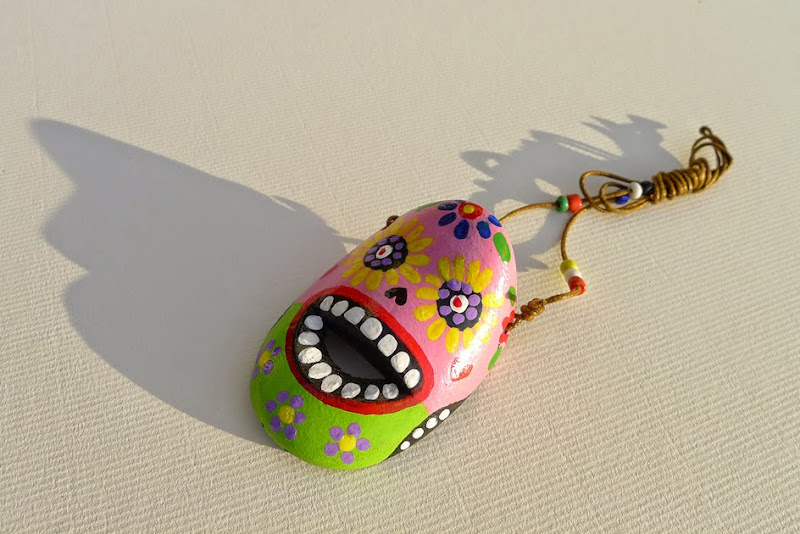 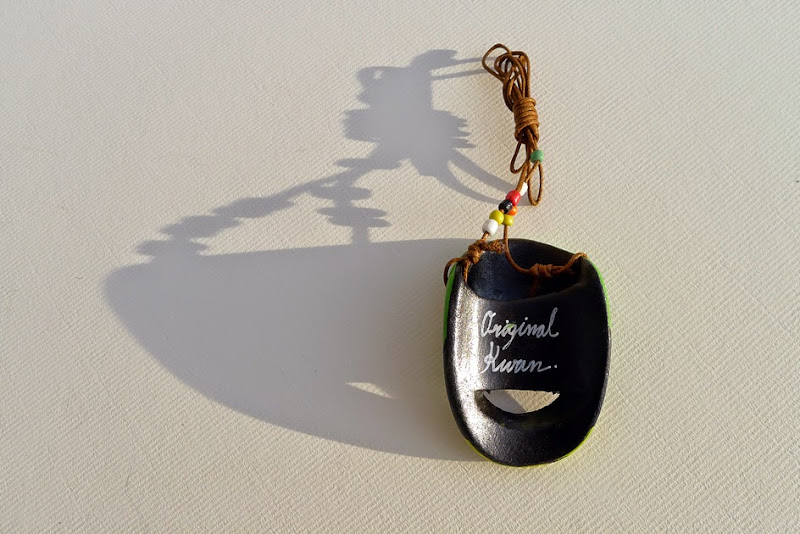 On a playability and technical side, the nose flutes by Kwan range from rather good to good, depending on the flute, but anyway a bit "windy" due to a broad mouth hole. As totally hand made, each flute has its own very shape and characteristics, but also depending on your own physiognomy. The nose air collector is shaped according to asian standards, as the Japanese flutes, making hermeticity difficult for european noses with a hard and low columella. But the clay is worked with a great care, and the airway is precise and clean. The fipple may vary in size and specifications, but here too, the work is rather clean. 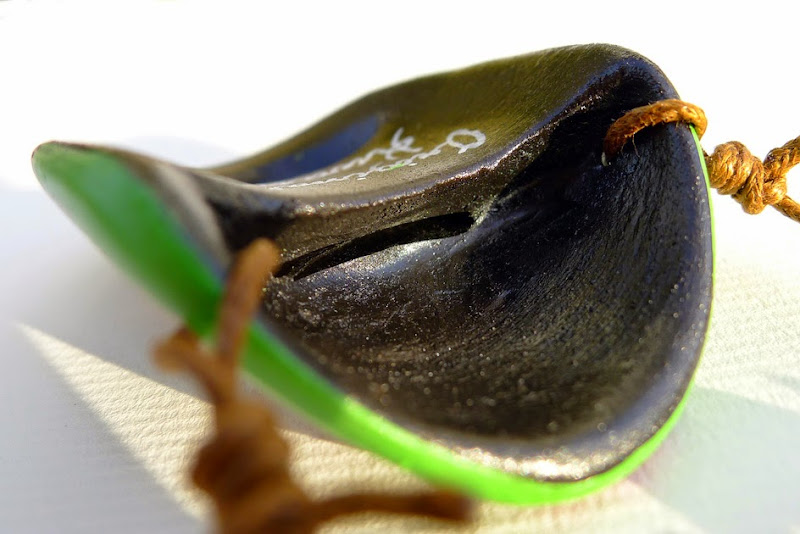 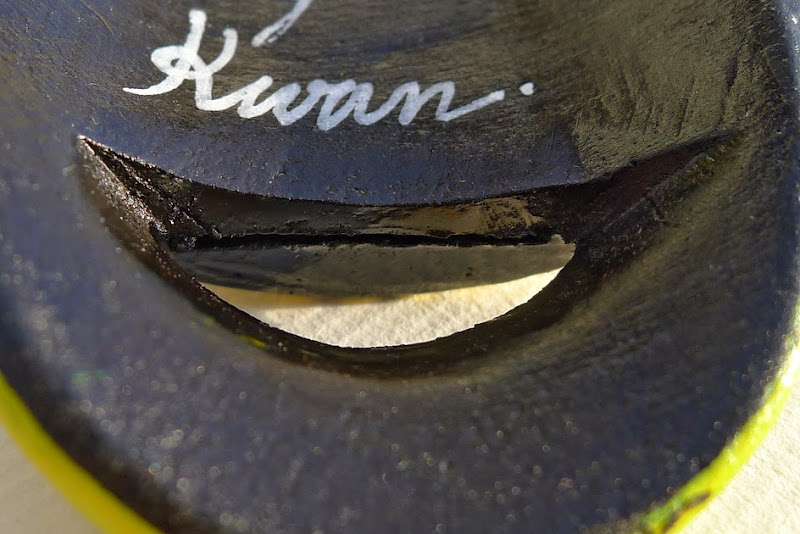 As we wrote above, those nose flutes are painted and ornated with care. Each one is unique. And other designs may be mabe on demand. But the best part is that these nose flute are very affordable: $14 (shipping included!) on this page. They could make very nice gifts for Christmas... and for Christmas, Kwan made a series of new nose flutes, here are the first samples (that should be released soon on the Ethical Bazaar page: 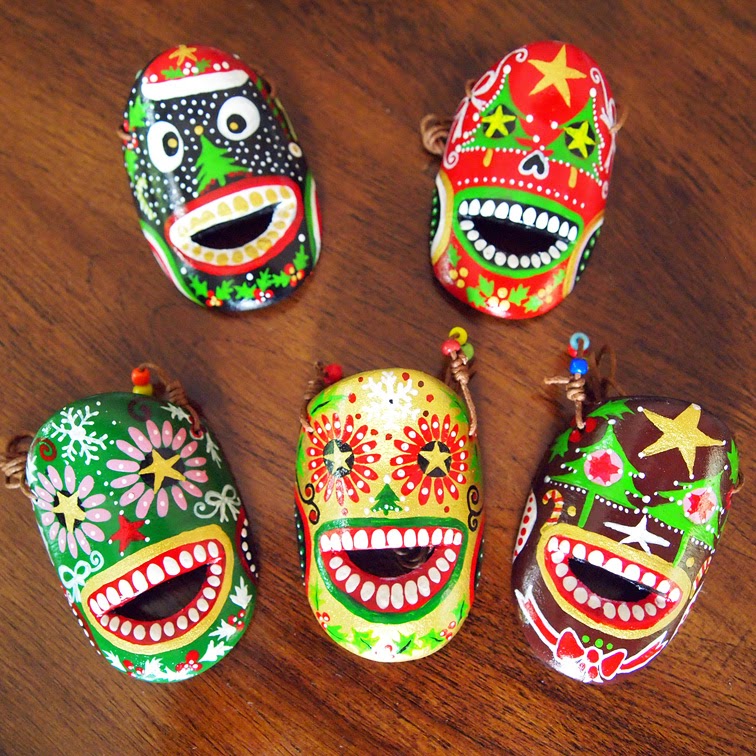