Yet another TV archive!

Here is another french TV archive, dating of April 1982. It is an excerpt of a popular Sunday program (Incroyable Mais Vrai, a spin-off of the original That's Incredible).

Here are some excerpts of the (condescending and chauvinist) dialogue:

[The presenter welcomes Mr. Bourdin. Questions about his profession]

— Mr. Bourdin is an Incredible But True musician, because one day, his daddy built a device...

— ... which is named the Narinophone ["Nostrilophone"]. Please would you show this Incredible But True instrument: the only instrument played with the nose... The case is a matchbox, and this is daddy's invention. So, teach us how to play the Narinophone... it's an instrument which is attached with adhesive...

— Narinophone, you see? Because we're like that, in France: we've got no oil, but we have Narinophones!... Is it an artistic instrument? It could also have been called the Morvophone (Snot-o-phone) too, but it was less melodious. I prefer Narinophone. Well, Mr. Bourdin, is the instrument set?

— Here is your mike, and you're going to play something for us with the Narinophopne, please.

[instrument falling on the ground]

— My God! Let's put it back quickly in its case, don't we, because it's a very precious instrument. And you see, this is France. France of Incredible But True, this France which – where is the camera? Yes, this one – This France which is able to introduce, on a Sunday, an Incredible But True instrument, packed in a matchbox, Mr. Bourdin's Narinophone, who is applauded as he deserves it! Bravo Mr. Bourdin!

Here is the footage:

Now let's have a look at some screenshots: 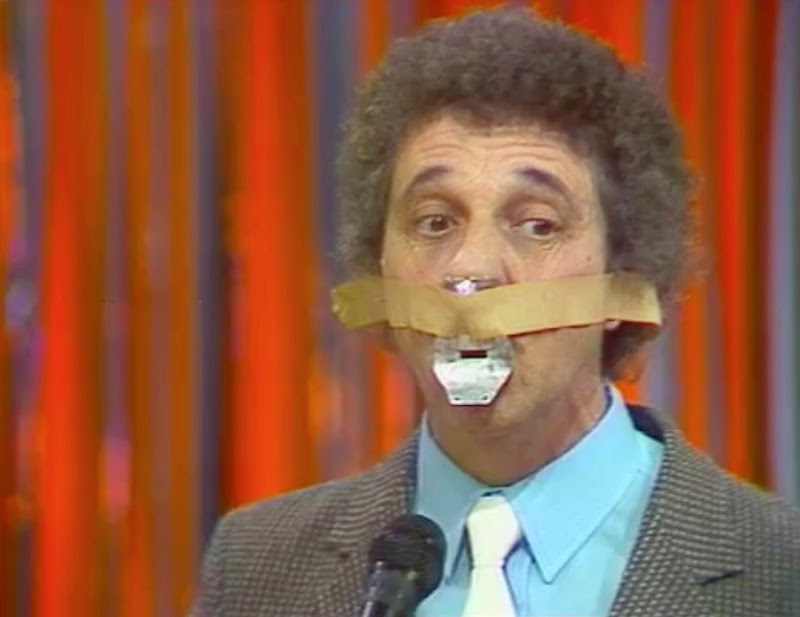 The nose flute is a metal one — quite shiny – with a straight (square) heel, on which one can see a pair of holes. At the very beginning, it is possible to see the back of the flute, and it seems it featured a lip rest.

Because of its shape, his nose flute looks to be an Ocariflute [see this post], and this is rather problematic...
In the footage, the TV host Jacques Martin says « his daddy built a device » and then « This is daddy's invention ». As far as we know, the Ocariflute was invented by Achille Brilhault in 1922-23. And according to the Brilhault family tree, Achille had no children [see this post]. Even if he had one, the son would have been named Brilhault too, and not Bourdin.
(Well, remains the case of Mr. Bourdin having been an illegitimate child. In this 1982 video, Mr. Bourdin looks to be around 55-60. So, he would have been born around 1922-1927. So, there is a technical possibility).

Mr. Bourdin's nose flute shows two holes in the heel. Maybe were they made to slip a cord for hanging the flute around the neck. How has this Narinophone stayed so shiny during more than 50 years without having gotten rusty? Twenty years before, in 1961, Jean Dubuffet's one was already clearly oxydized... Well, safely preserved and wiped up or varnished... It could have been a genuine Ocariflute in perfect shape.

I have no answer for any of those questions, and won't certainly never have. Was this instrument a genuine Ocariflute or a copy made by a musician? Did Mr. Bourdin's father build this instrument or was it just a family belief? Was he the inventor of the Ocariflute and sold the patent to Brilhault? Only a copy of the list of 1923 Concours Lépine silver medallists could help... (For sure, I made a search for a patent registered by an inventor named Bourdin, but found nothing).