Besides the architecture school, I teach in an engineer school (Industrial systems engineering), in a master's degree specialized in design and innovation. The peculiarity of the class is that the students come from everywhere (mostly South America, Argentina, Brazil, Chile, Colombia,..., but also Europe (Spain, France for sure), and Japan, China, Saudi, Africa... They also have a very different background: mostly "industrial engineers", in mechanics, plasturgy, logistics but also "global designers" specialized in packaging, woods,.. and this year, there are also a mathematician, a chemist, a PhD in Psycho-motricity, an economist and a specialist in food processing industry.

Today was the first course, and I'm used on that occasion, to ask the students to invent and draw something, just to be able to evaluate their potential. This morning, I first explained to them how a simple whistle works, with a thin air flow splitting on a sharp labium, part of the air going "outside" and part of it in a closed cavity, on which capacity depends the tonality of the whistling that is produced. I drew this on the blackboard : 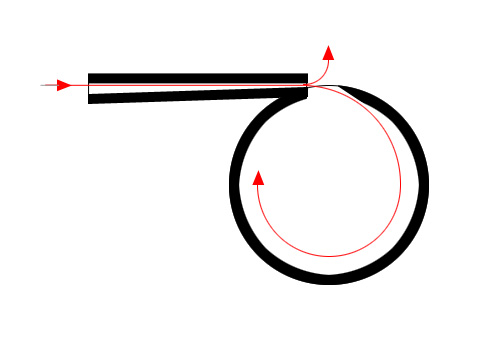 I also told them that, if the whistle cavity could be voluntarily shrunk or enlarged under control, it would be possible to play music. 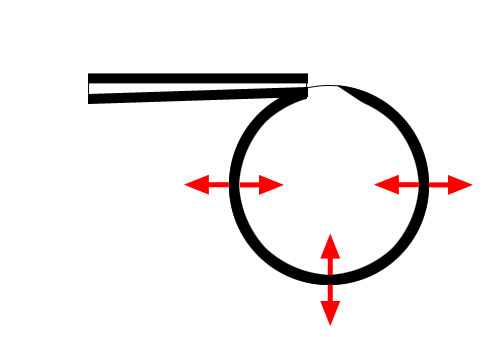 Then, I asked them to invent and design « a wind instrument of variable whistle type, adapted to be played 1) by blowing the air with the nose, and 2) using the mouth as the variable cavity. »
None of them had never heard of the nose flute existence, and for sure, I didn't show any one to them. They had one hour and a half to produce a front view, a side one and a cross cut. Ouch!

Some of the students didn't perfectly understand the necessary requirements for the instrument to be functional, but most of them succeeded, with more or less "engineering".

Among the best results, it was funny for me "almost to recognize" existing shapes. On the following one (despite the bizarre labium), the student re-invented the Carter's nose hood, but designed a mouth shield rather similar to the Davis' Humanatone (the plastic one). Both parts are linked by a funnel-shape airway. The whole shape is very interesting and quite elegant : 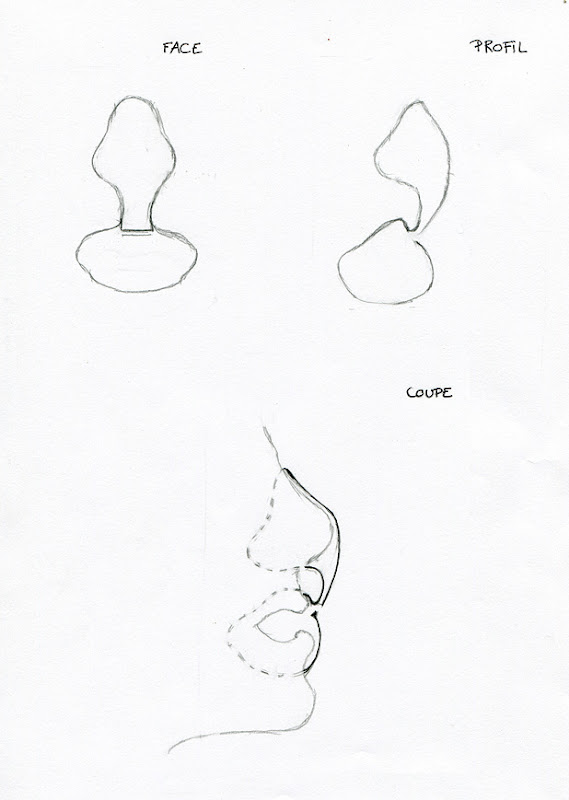 Another one used a "nose hood" and a partial "mouth tube", on which was added outgrowths designed to avoid air leaks. And one also featured a partial tube, plus a long airway made as a handle, like the Cello-phone.

A student drew a flute made like a partial egg-shaped mask, hermetically covering the nose, with a sharp-ended mouth shield, a bit like a Bocarina™, while another one invented an instrument with a long nose skirt (a double wall):

Some designed very bizarre or baroque shapes. Here is a "double" nose flute, with a double nostril-plug and with two airways leading to a double labium. The explanation was « so, the airway can be put around the ears to hold the instrument on the player's face ». One student invented a very surrealistic one, equipped with a huge handle and a helix airway.

But my preferred one is certainly the following one, because it is full of innovations. First, the student intuitively called it "nose whistle". He wrote as a description: « The visible part is exactly shaped like a whistle, with pure forms and sharp angles. The holding is provided by the nose hood and the flexible part which is inserted in the mouth. Only one air duct from the right nostril, in order to breathe with the left one. »

Indeed, I asked the student why he invented a "mouth balloon"... The explanation was that he was feeling as non-hygienic to "blow the nose air to the mouth", so he designed that flexible cavity - "actioned with the tongue" - to contain the "nose air" (great idea!). The soft "nose case" with a rubber circling the head is also a good idea. Maybe the "one nostril work" is not such as functional, but it shows that this student had a real reflexion about how to make such an instrument to work at its best. 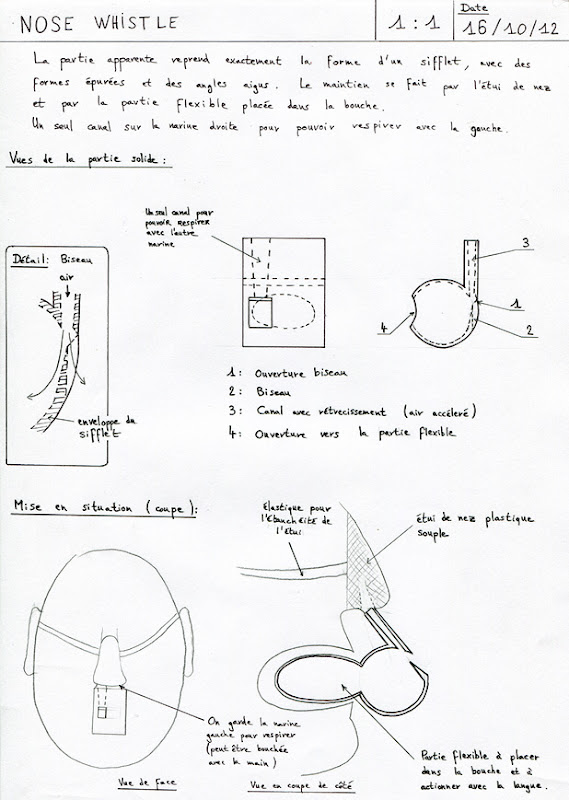 Let me tell you I was very impressed by the results, and remember all of that was designed in 90 minutes, by people having never heard of nose flutes!!

One last word: the students' reaction was great when, after they brought their work to me, I took the Bocarina™ out of my pocket and played something... Oh! This bloody thing does exists for real, and it works!
Publié par UkeHeidi à l'adresse 9:45 PM