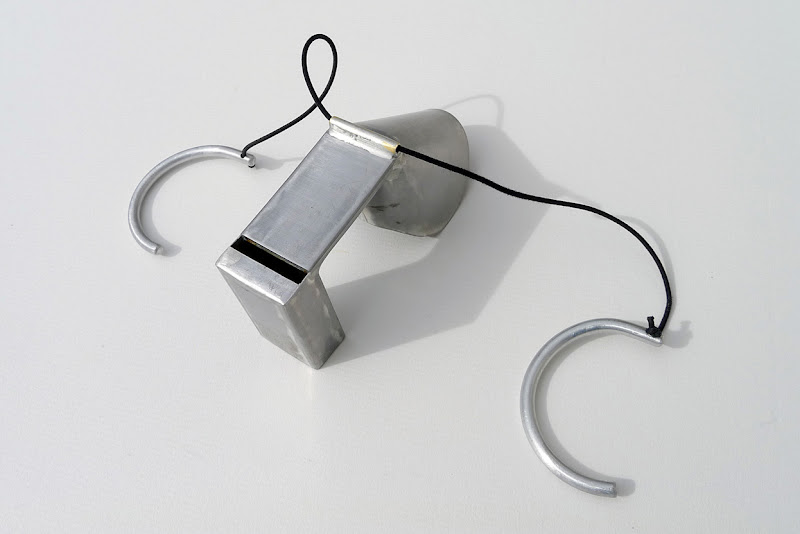 Compared to our "modern" nose flutes, the Nasalette was designed with 2 particularities. Let's better say that 3 features totally and quickly disappeared from the posterior designs.

The first of this particularities is the nose hood, conical and enveloping the whole nose. Indeed, you'll read below it's not the best solution to capt the air that is blown. Also, this has a marked tendancy to produce condensation inside the tin hood, humidity that finally goes down the airway. Garrett J. Couchois, in 1899, has already adopted (invented) the concave nose rest system that is still used nowadays.

The second specific feature is the mouth tube. The player needs to insert it between his lips to be able to play, which is not really hygienic nor handy (but rather efficient to avoid air leaks). In his elegant design patent from 1899 [USD31876], Couchois still used the same feature, however with a circular tube, which is even more efficient than the Carter's rectangular one. 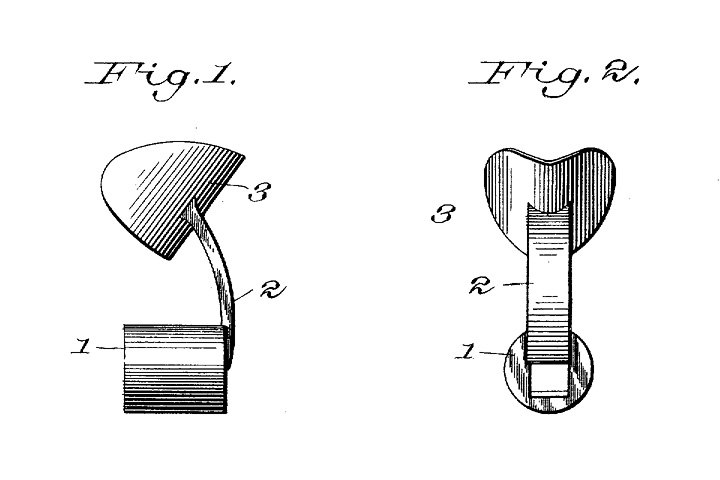 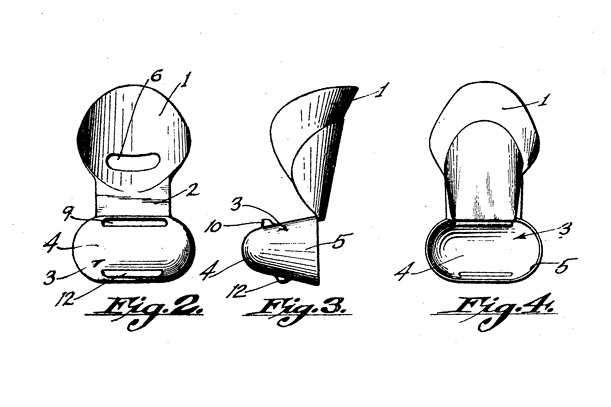 The last, but not least, particularity offered by the Nasalette is its handsfree system. It's unbelievable (but true) that Carter immediately thought his nose flute would be probably played together with another instrument. He clearly specified that in his patent description. And the way he solved the need is quite funny or kitsch: with a rubber cord, not surrounding the whole performer's head, but attached to two "wire loops", like the temple endings of spectacles!
This feature has never been seen again, and more, the nose flute including a handsfree system (2 holes for passing a cord) are still very rare (H. Handler and M. Sommers only, as far as I know).

So, the Nasalette is globally composed of 4 parts, the nose hood, the airway, the mouth tube and the handsfree system. 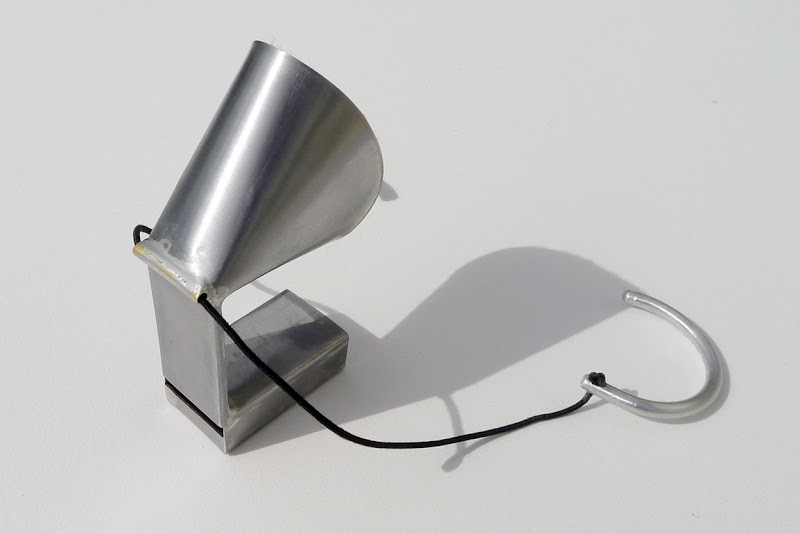 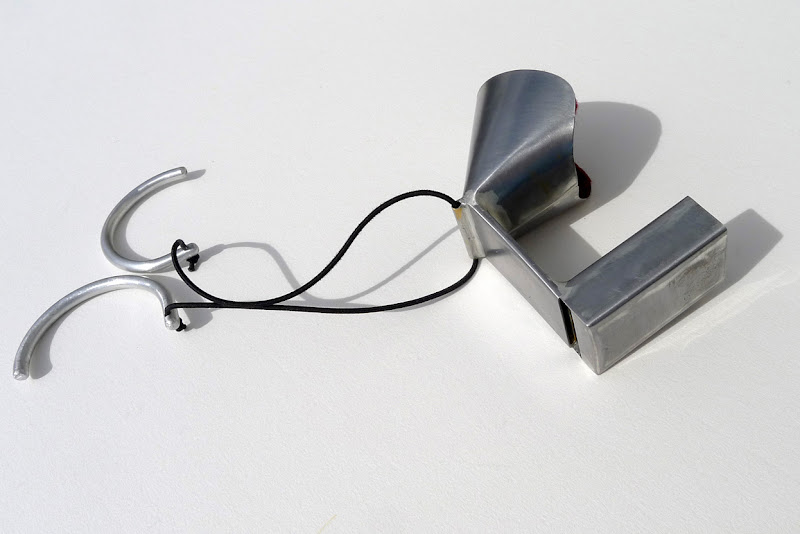 I must admit - with all due respect to this ancestor - that the Nasalette is not really comfortable nor ergonomic. It is made with tin sheet and, even carefully sanded, the edge of the nose hood is not pleasant when pressed on the face.

The mouth tube, rectangular, is a bit too big (I made it with a thickness between the one designed on the technical drawing (short and thick) and the one shown on the profile sketch (long and thin) in the patent).
Anyway, to be functional, it has to be a bit thick.

While playing, there is much air leaking from the nose hood: indeed, even "egg-shaped", the cap cannot fit precisely any type of nose. And since there is not direct way for the air from the nostrils to the air duct, there is a huge tendancy to leaking. The air blown from the nose goes straight to the bottom of the nose hood, then has to follow a severe angle to reach the air entrance, and then has again to draw a square angle to reach the narrow air way. So, the air has almost a shortcut by leaking over the nose : 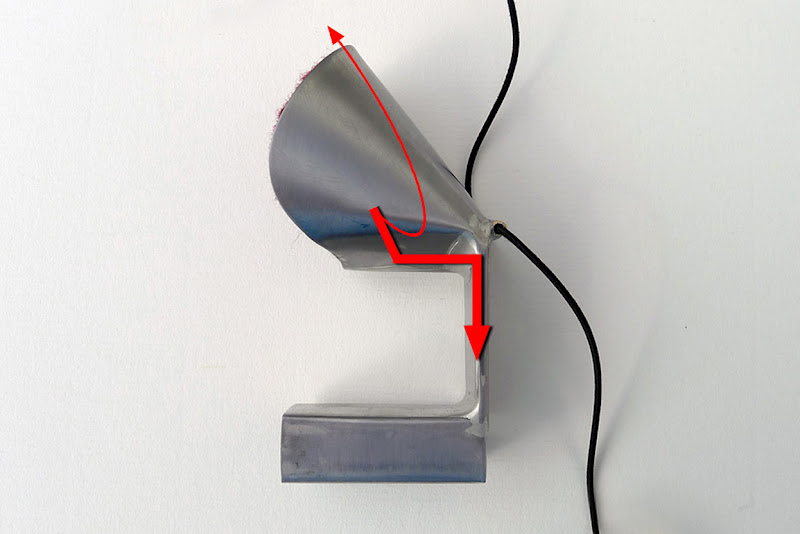 So, for comfort and to avoid air leaks, I glued a felt pad around the top of the nose hood. This is not in the patent, but it's not a modification to the nose flute itself. I suppose Carter made a nasalette adapted to his own nose. 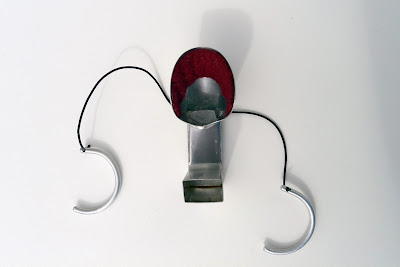 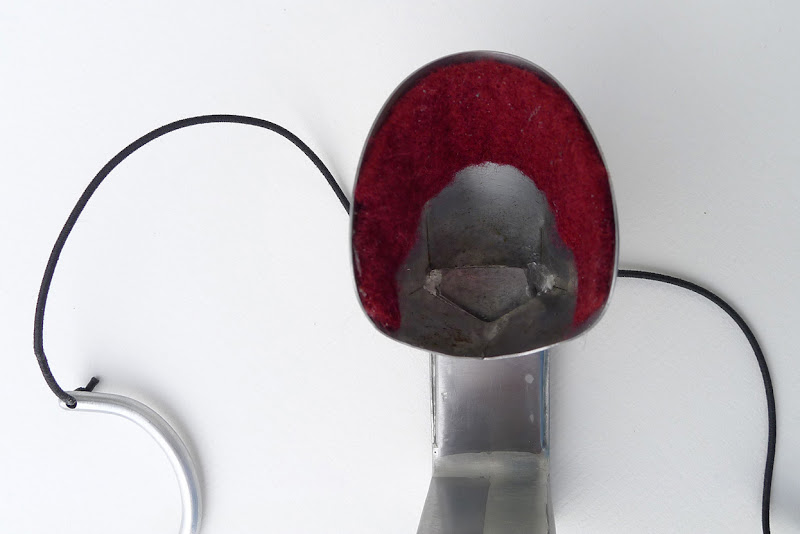 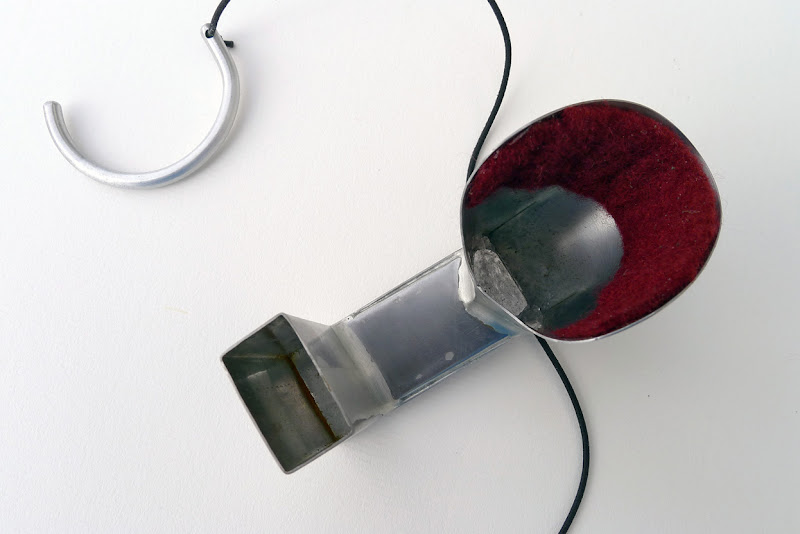 The handsfree system is a real pleasure. It is funny and handy, very efficient to hold the Nasalette in the right position. It would have been 100% perfect if only I had the ears implanted just one inch below their actual position, but it works very fine. 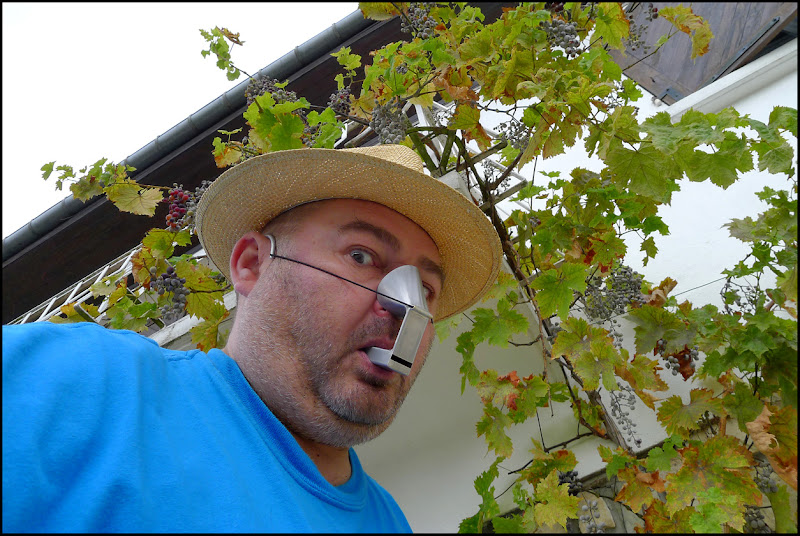 On the sound side, the Nasalette is really a sweet instrument. It has a nice clear sound, not powerful and loud, but soft and sweet. The range is "normal": it is rather difficulet to reach basses, because of the size and shape of the mouth tube, but the sharps are easily reachable, and according you press on the nose hood with a finger to stop any air leak, you can reach very high sharps.

Here is a short video, of a famous... irish tune: