I found many (really! around 200!) advertisements for the Magic Flute in the Australian newspapers. Most of them are just a few lines mentioning its availability in this or that shop. But a good bunch of them show a drawing, and they will help us to sort out our lacunary knowledge... or create even more mess in our attempt of understanding.

The very first ad for the Magic Flute I found dates of 1905 (Jun. 30), and it was a real surprise for me. It was not sold By Albert & Son, but by Natty Wood's bazaar, Wollongong. Almost the same ad was published in August: 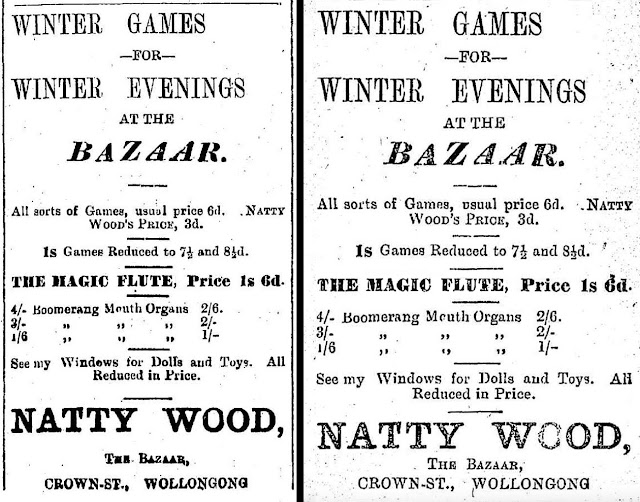 Was Albert & Son the wholesaler ? I'm not sure of that. Indeed, as we will, it was probably the American version of the Magic Flute, and it may have been imported by the Londonian shop Ellisdon's. Why ? because many of the first ads are published by Ellisdon, and it was a huge wholesaler, with its novelty catalog. Ellisdon's also used to sell a "Magic Flute" in the 1930-40s that was said to be "British make" and we don't know if the later aussie nose flute was this version, or a Humanatone... Anyway, in the 1900s, it really seems the Magic Flute is the American version, according to the graphics. 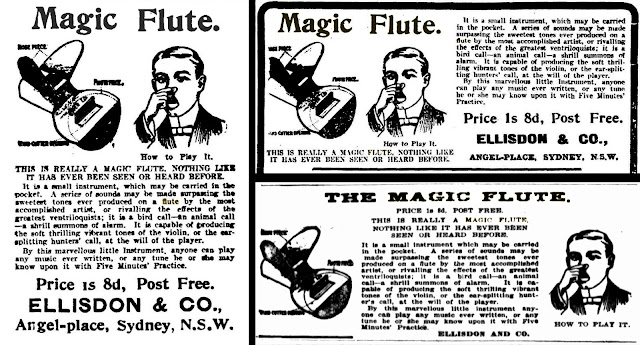 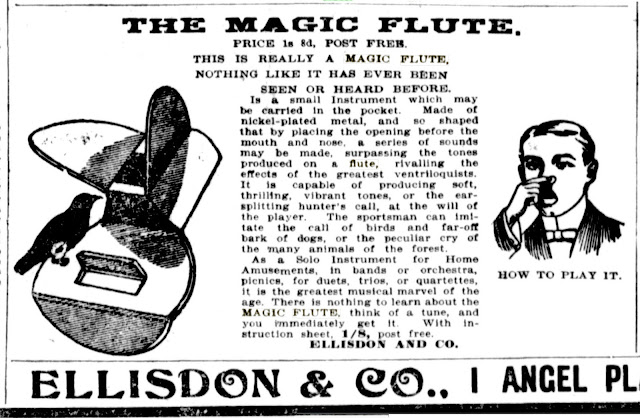 Union Mfg ads from Nov. 1906 and Jun. 1908:
Does it mean that Sidney/Ellisdon sells early (american) Magic Flutes and Melbourne/Union Mfg sells Magic Flutes/Humanatones? Just remember the trademark has not been registered at this time, and the name "Magic Flute" can be used by everybody...

At the same period of time, other Sidney shops sells the early Magic Flute, like in this cute announcement (same Nov. 1906 month): 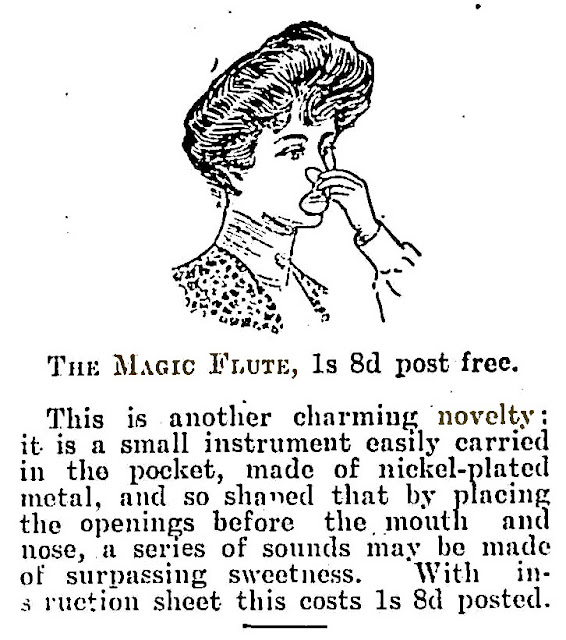 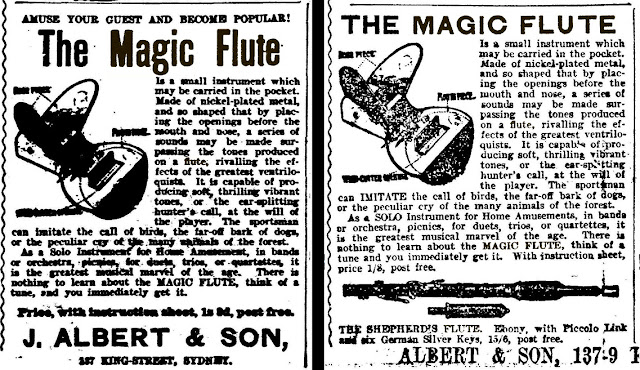 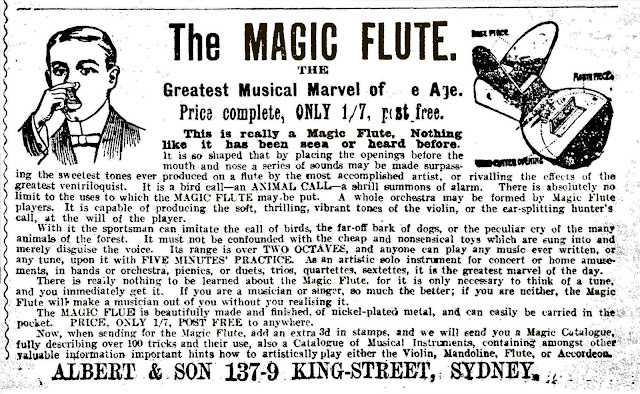 In 1913, The Union Mfg still sells a "Magic Flute/Humanatone", and the Alberts an early Magic Flute. The last appearance of the early MF, dates of July 1916. It's an ad from Shaw and Sons, Brisbane: 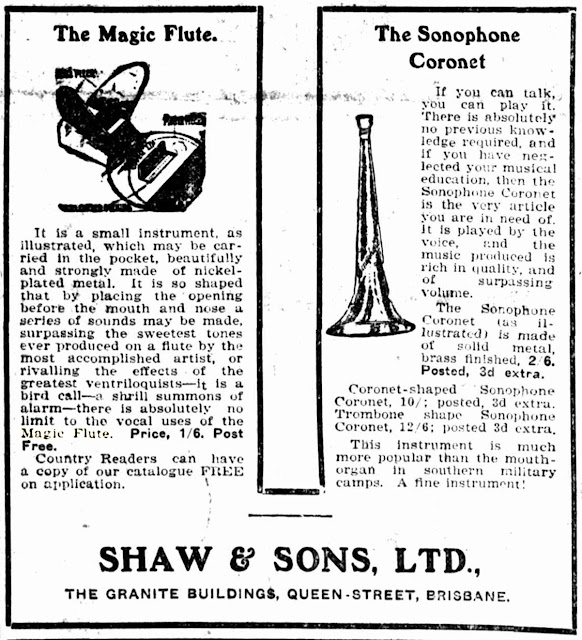 In fact, "Mr. Henderson" will still be used as a illustration until 1923, playing the early Magic Flute, but no one could recognize it. Here is an ad by Ellis Smith & Co, Sydney (July 1923): 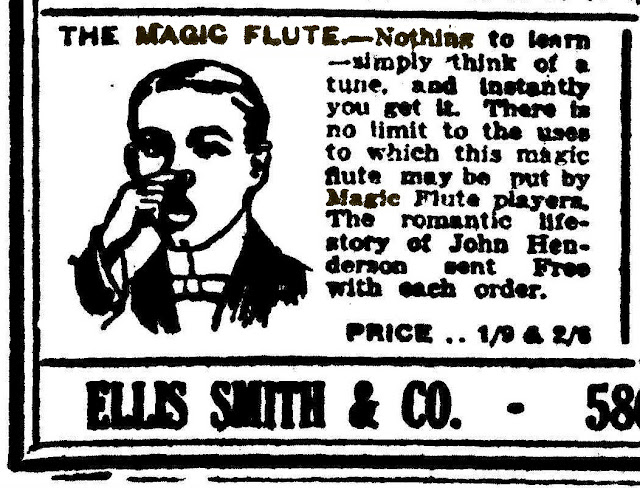 The trademark 'Magic Flute' was registered in December 1924, but in found no ad with an illustration at that time. But something happened then. In September 1929, the Union Mfg Co., Melbourne, publishes an ad for the Magic Flute, with the usual Humanatone engraving. But... but this time the subtitle "Humanatone" has disappeared, and more, compared to its 1906 and 1908 ads, the name 'Humanatone' has deliberately been erased (blackened) from the nose flute. 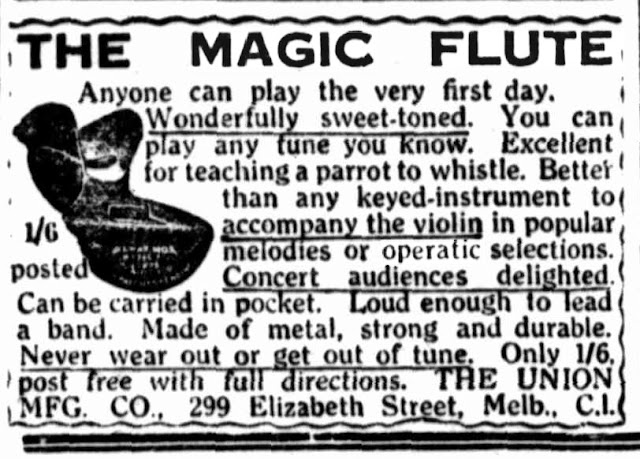 What does it mean? Albert registered the trademark at the end of 1924 and launched the new model (the stamped one). So, Frank Albert was the sole to be allowed to use the brand. It became impossible for other shops to continue to sell 'Magic Flutes' from other origin that the Albert's ones (maybe also, Frank Albert signed an exclusivity clause with the Humanatone Co). Anyway, since the new Magic Flutes were stamped 'Magic Flute', it would have been weird to show a nose flute stamped 'Humanatone' in an advertisement.

1947 seems to be a rebirth for the Magic Flute. It's rather surprising since after the WWII, Humanatone didn't restart a metallic nose flute production, but definitely turned the plastic model designed by Ernest W. Davis. In Australia, the Magic Flute is advertised again with illustration. A new illustration! Not the early MF, not a disguised metal Humanatone, no, a real Albert's stamped Magic Flute! The first I found dates of April 1947, J. Stanley Johnston ad. 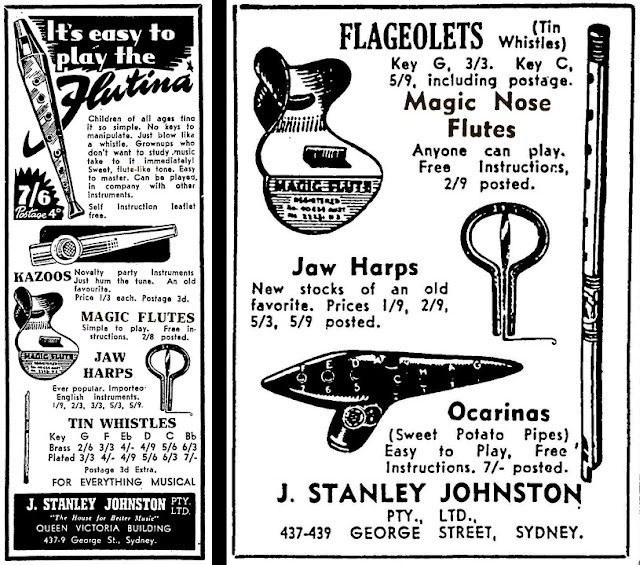 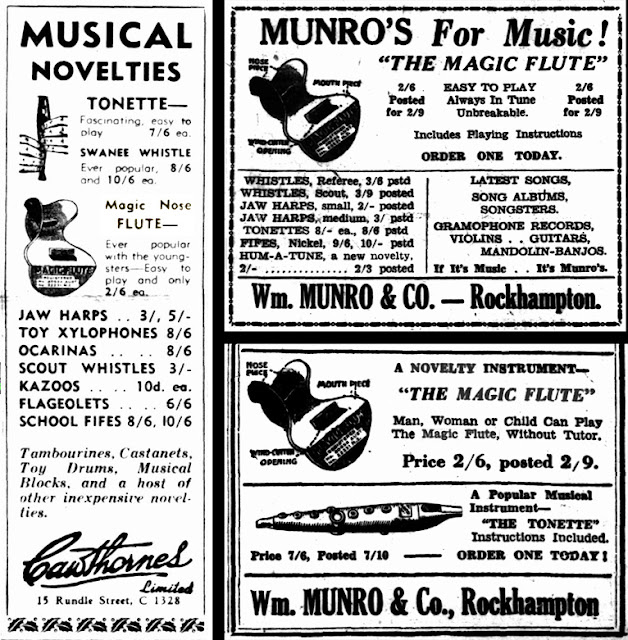 Still more advertisements then, but less and less. 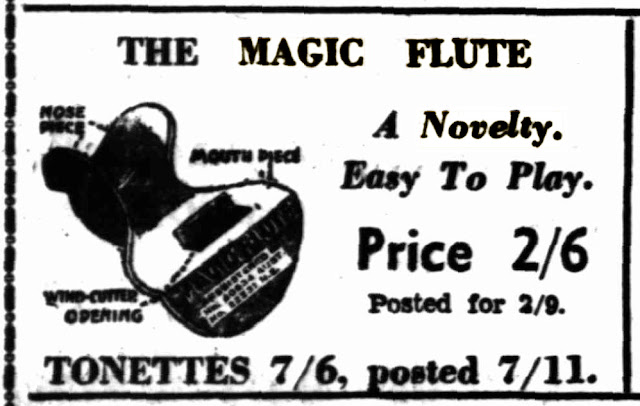 The very last mention I found dates of Dec. 31st, 1955, but sadly with no illustration, and at 6th position in a list of nine instruments: 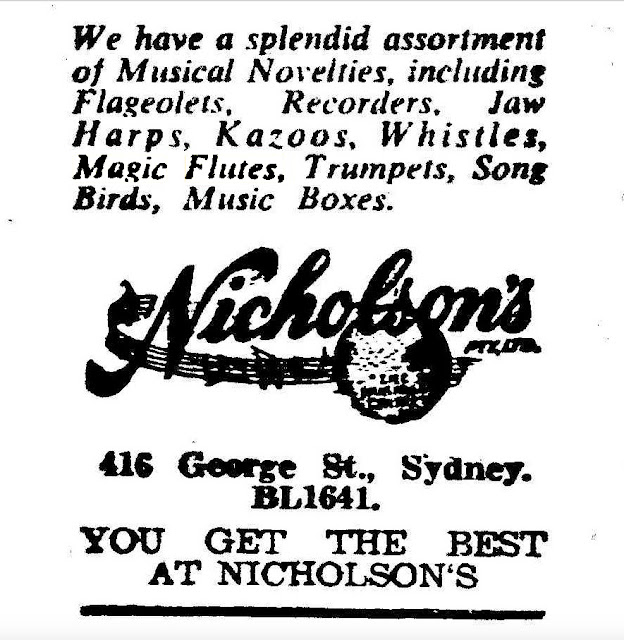 
Well, this long series of articles about the Magic Flute is about to be complete, but we still have some documents to publish and will have to draw a conclusion. Stay tuned!