So, the trademark stampings on the Magic Flutes necessarily appeared after those dates, let's say from 1925. My shiny Aussie dates from before.

Then, totally by chance, in a matter of 3 months after having found the shiny unstamped Magic Flute, I have been able to put my paw on 3 stamped Magic Flutes, from 3 different sellers! (I have to say that I had been looking for a Magic Flute for years! And in 3 months, I got four of them! Well... Six, in fact!...see Part V)

And even more: 3 different models! Look at this post-1925 happy family:

If you remember Part II, the (unstamped) Magic Flute was available in three versions:

Among my Magic Flutes, the first one is the Nickel-Plated Model. It is the simplest of the three, but it should be bright. Unfortunately, the last owner scraped it like a hog seeking for juicy roots, particularly on the front, and the surface is very dull and scratched. Some points are very oxidized and have turned black, like nickel does with time. 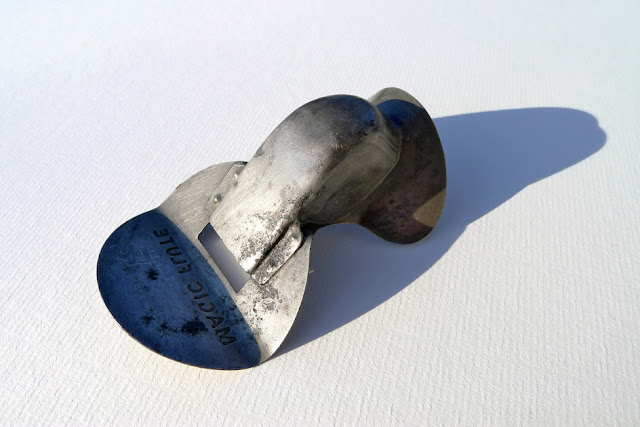 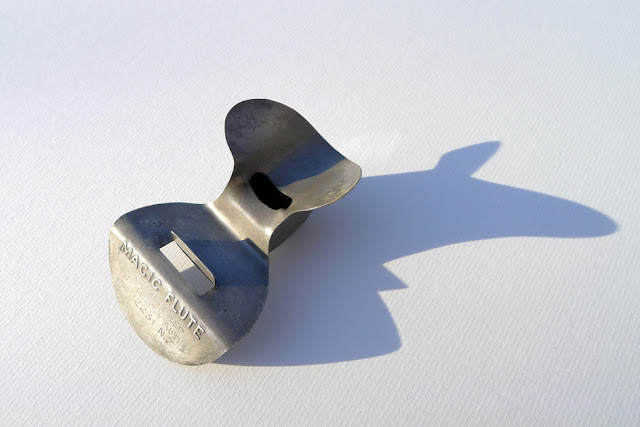 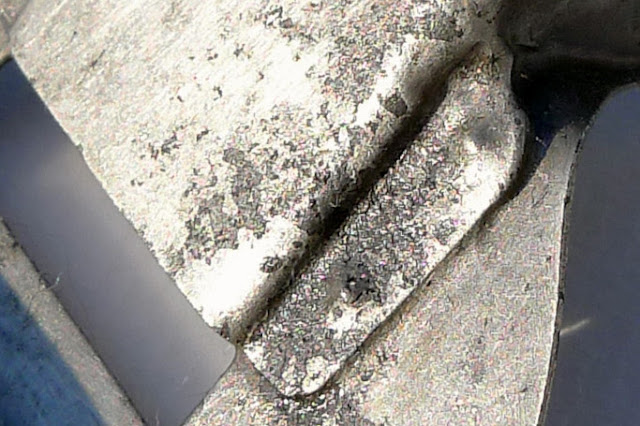 The second one is obviously the Copper model. It is the heaviest of the trio, and weights 20g. As mentionned in the price list, it shows a beautiful dark patina, and was pre-oxidized. But it has no verdigris traces, so I suppose it's more a bronze alliage than pure copper. This De Luxe Model is simply beautiful. But if you look closely... it is not plain copper, but plated! 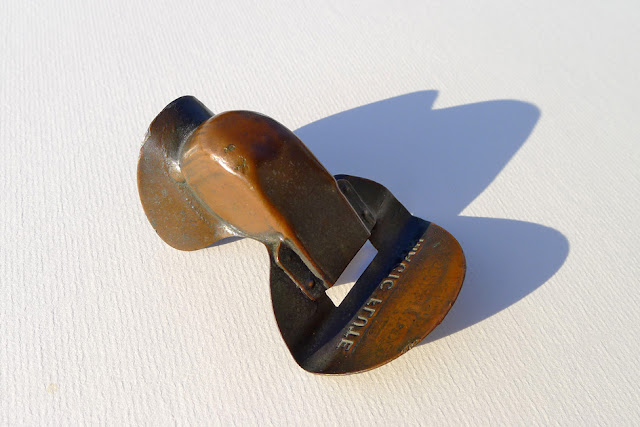 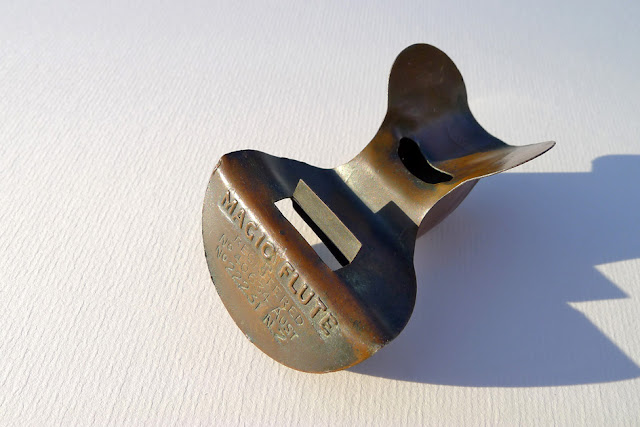 Great patina, but copper plating only! : 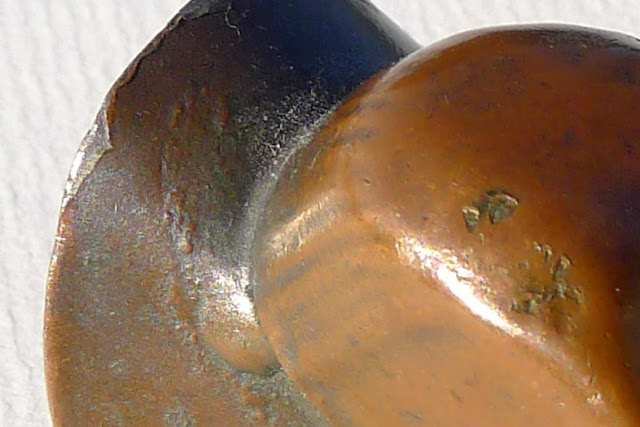 The third one is the Concert Model, with a thick coat of shiny silver! The oxidation veil, brown turning darker, is typical of silver. Mine has lost its plating on the airway, that's how I can figure the thickness of the coat, and also see the dark grey metal under it. It is the same metal than the one used for the basic Humanatones and other simple nose flutes. It's simple tin. You can notice the lack of the lip rest on this one, but I suppose it has been broken or removed. This Concert model has been damaged a lot, but new, it should have been a beautiful instrument. 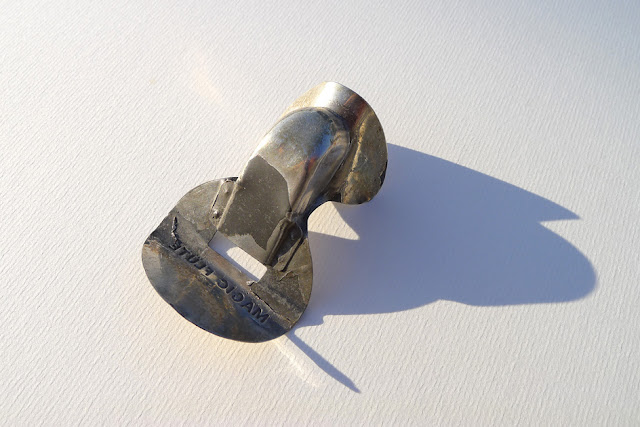 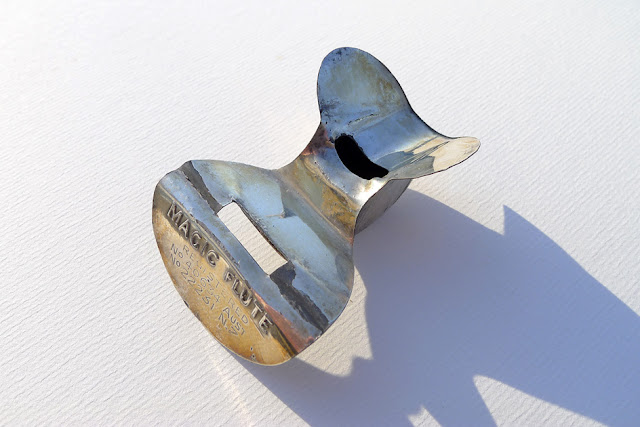 The thick coat of silver (yum!): 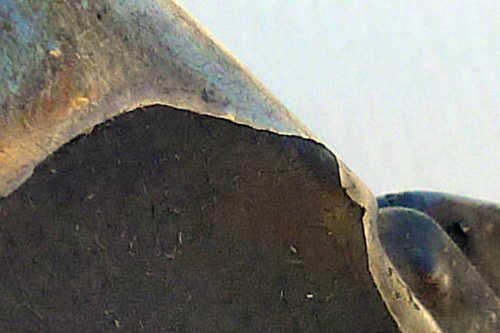 The stampings are crip and clear, but the wear and tear of some letters show that the copper nose flute was probably older (stamp younger) than the other ones. 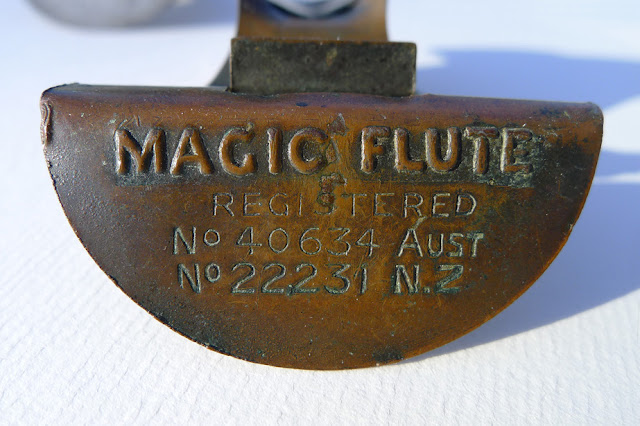 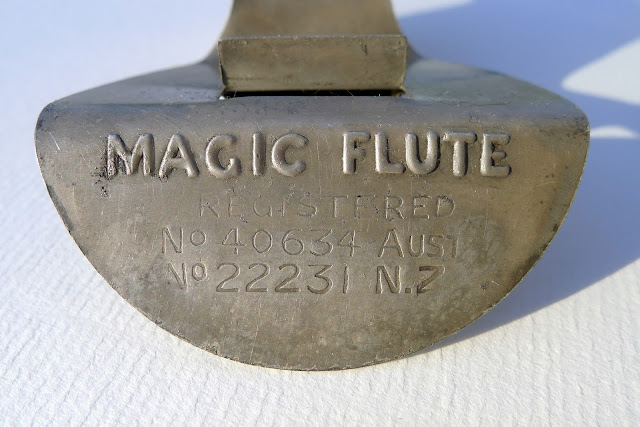 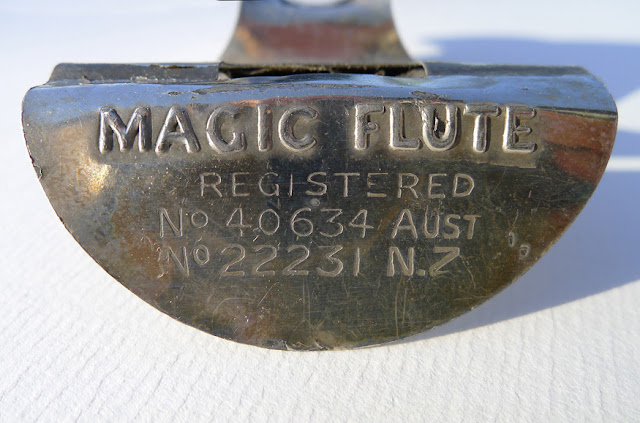 Now, Humanatone or not Humanatone, that is the question. I must admit there are many similarities shared by both nose flutes...

… but there are also differences: the larger collar around the nose hood on the Magic Flute, the slightly differently shaped riveted flaps and the lip rest cutting, which is rounder at the corners on the Humanatone, and sharp angled on the Aussie flute. Are those points enough to assert that those flutes are different models ? I'm not sure... But they are strong enough to say that the Magic Flute was not produced on the very same press that formed the Humanatones. A copy ? Probably not, as we will see in Part VI.

In 1904, Frank had a second son, Alexis (1904-1996), who became the "& Son" of the family shop sign. When the Magic Flute brand was registered, Alexis was 20 (his father was 50) and probably had already learned the job since, according to Wikipedia:

Frank's son Alexis, assumed the role of Managing Director of J.Albert & Son in 1931. Over the next 50 years the J. Albert & Son empire gradually acquired interests in a network of eight stations. The stations included 4BC in Brisbane, 3DB in Melbourne and 2CC in Canberra. Later still in the 1950s the company became a major shareholder in ATV Channel Seven.


But it's not over for the Alberts with nose flutes... and that's another story, that will be told in Part V !