So, the Magic Flute came with its papers, I was saying... Yes, two beautiful memories, almost one century old.

The front page has a beautiful header, showing joyful birds gathering before the Magic Flute. One of them has already landed on it and looks very curious: maybe could he use the nose flute as a nest box! (One thing bothers me on that image though: the drawing of the flute has been directly borrowed from the 1903 American Magic Flute advertisement... Is it a simple steal or does it mean a link between the two Magic Flutes?? Why to choose this image of a flute that is not shaped like the one in the box??) 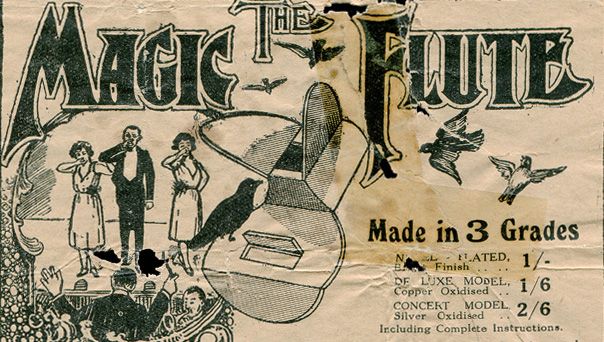 On the left side of the nose flute, a Magic Flute trio live on stage, before an orchestra. And on its right, the info that the Magic Flute was available in three grades:

Wow! Already some surprises here! The first one is that my beautiful shiny nose flute was the cheapest and the most humble grade among the three available!
Then... there was a silver model! Silver plated, I assume, but silver! :)

I'm not very easy with Commonwealth currencies and prices, but I guess they were, respectively: 1 shilling, 1 shilling and 6 pence, and 2 shillings and 6 pence. I suppose my flute was from the 1920s, and at the time, the Australian currency was the Australian Pound.

On the left side of the page, a series of drawings showing different possible uses of the Magic Flute, as explained in the text. In a concert hall, forming a nose flute orchestra, as a bird call at a hunting session, as a « shrill summons of alarm » (the image depicts a street demonstration!), or as a solo instrument.

The back page of this first flyer has also a beautiful header. It shows a couple of noseflutists whistling, and separated by the title "A Magic Flute Romance". Hahaha! What a program! (It just makes me think of my personal case with the Incomparable Nosy Diva...). Well, take a moment to read the story of Mr. and Mrs Henderson.

This header is, one more time, a source of questions... If you take a look at the design of the nose flute played by Mr. Henderson, you'll be able to see the flat top on which he puts his finger. The model draught here is, with no doubt, the American Magic Flute... The text deals with a story happening in Omaha (Nebraska, US). More, the story is quoted from the Home Journal, Nov. 19th, 1899. Wait... The American Magic Flute was patented (filed) on Nov. 21st, 1899, just two short days later!!! Is it a coincidence? It looks like a communication campaign! I'm more and more inclined to believe this whole flyer borrowed drawings and texts from the original Magic Flute. But... but the shape of the Aussie model and the three different grades seem to belong only to the Australian instrument. What's the meaning of all of that?

The Howe catalogue ad, the US Magic Flute and Mr. Henderson:

At this time, any Noseflute.org reader not interested in history research has left for an aspirin and a nap. The other(s) should be very excited!

The front page of the other flyer is a detailed user manual. At the top, the Howe catalogue illustration once again, but this time in a nice format and complete of the legends that were barely readable on the catalogue (nothing special, however): 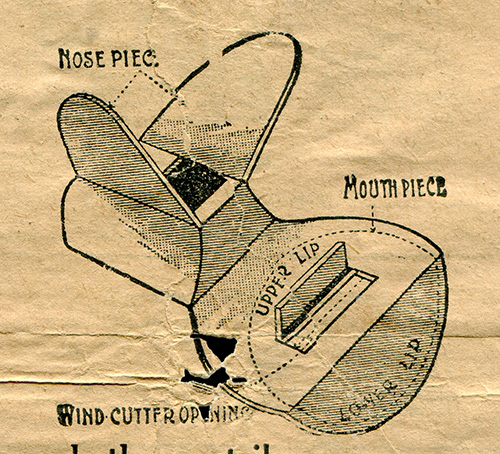 Under it, Mrs. Henderson, and the user manual. It is probably the most complete « How To » sheet for nose fluting I ever saw, with detailed instructions to get low or high notes, how to blow, how to obtain a vibrato and so on. And once again, the price list.


The last of the four pages is the only one which doesn't deals with the Magic Flute, and even more, with any nose flute at all. It is a full advertisement page for mouth organs! But contrarywise to what one may think at first, it is maybe the most interesting page of all four!! Why? Well... you'll have to wait for Part III!