I found a few articles mentioning the Magic Flute, generally just a few lines, but yet enough to feel the presence of the instrument during parties and concerts. 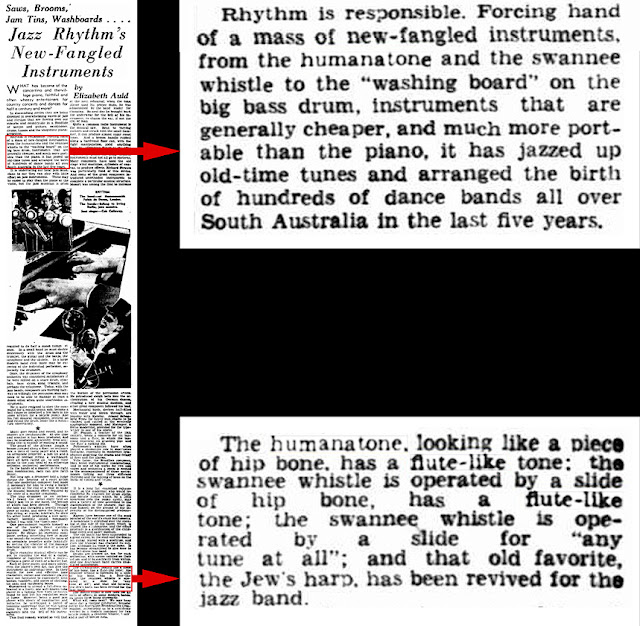 Now, is it possible to draw a time chart, a chronology for the aussie Magic Flute ? I'm gonna try, but please keep in mind that the following dates are not sure (mostly based on advertisements), that hypotheses are hypotheses, and so on...

1903: the US Magic Flute appears in the Howe catalog (see here)

There is an intermediate model (my shiny MF). It is very probably a Humanatone, with no stampings (special make). This version is obviously prior to 1925, but maybe not a lot before, because it was sold by Albert and had already the Humanatone shape. Kind of early 1920 ? I don't know.

December 1924 is the registration date of the trademark 'Magic Flute' by the Alberts. All the Magic Flutes were stamped with TM numbers from then, and probably J. Albert & Son gets the exclusivity on nose flutes (in the case the Magic Flutes with new design were really produced by the Humanatone Co.)

This is during the fifties — not earlier – than the metal Magic Flute stopped to be produced. That's another question... It means that while the Humanatone have turned to plastic in the US (since 1943), the company would have continue to make metal instruments for Australia ... ?

This period of time seems to be the most consistent for the production of the plastic Magic Flute (Schwan shaped), although it could 'technically' be "1954 to 1969". This instrument was certainly produced by Weidlich und Lohse in Göttingen if it date from the 1950s. If it dates from the mid to late 1960s, it could have been made by the unknown company which bought the Schwan moulds (W&L appeared in the Göttingen industry register in 1958 for the last time)...
Was the plastic MF sold in shops or was it a marketing gift, we don't know. 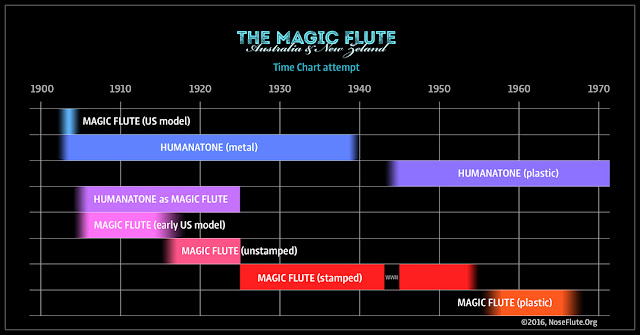 Yes! If you have followed the seven articles of this series, you know that the Albert dynasty, Jacques (1850-1914) the initiator and his son Frank (1874-1962), who registered the trademark and developped the market deserved to be inducted to the Nose Flute Hall of Fame! (The heirs Alexis and his son Ted got immediately management responsibilities in the group and have probably not been directly involved in the Magic Flute story).

So, let's unfold the red carpet to the memory of Jacques and Michel-François 'Frank' Albert, in the 'Producers' section! 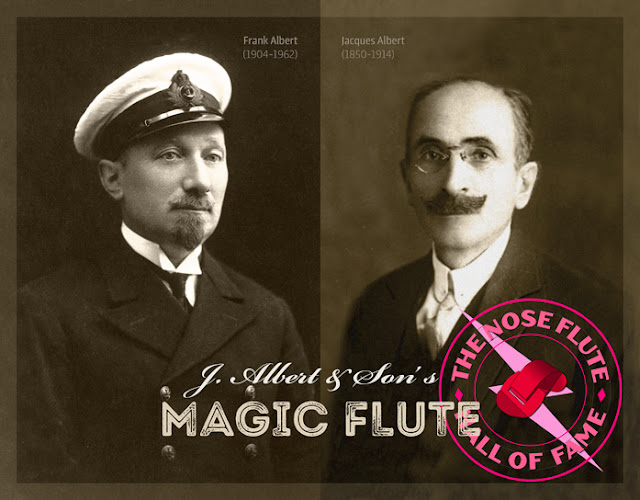