[sequel of Part I, Part II and Part III]


In 1919, George W. II is 43 years old. He resides at 225 W105 and is commercial representative for his father's and brother's activities. But George has another occupation. That year, George and his wife Kathryn apply for a passport. They intend to go to Cuba. On Kate's form, the purpose of the travel is "Visit". But on George's one, it is written "Racing". And in the occupation field: "Racing". 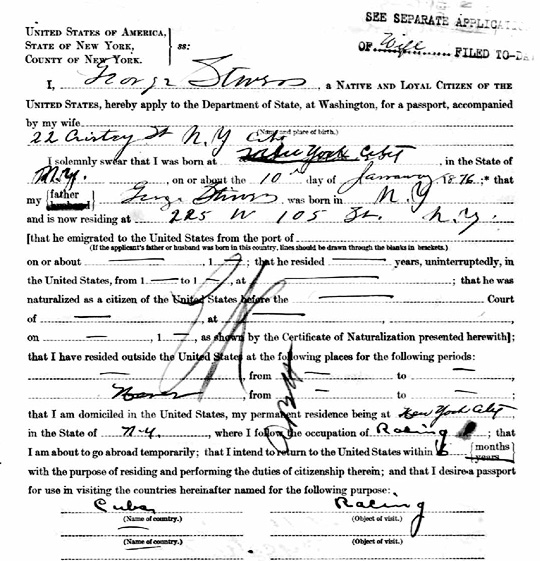 And more, the witness identifying George for the passport is a certain Eugene Bell, a family friend, having "racing" for principal activity and declaring to know G.W. for having been « associated with him in past 15 years racing ». George has been practicing racing for that time, i.e. since 1904! 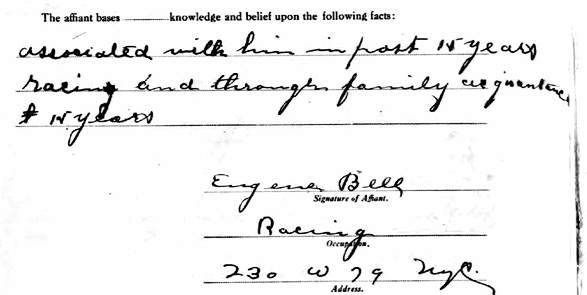 OK. But what races? Bicycle, horse or roller-skate? I don't know, but...
But George applies for his passport November 6, and specifies he intends to come back to the USA before 6 months, that is before the 6th of May. He does not specify when he will leave (he may have applied long in advance for his passport).

In Marianao, Havana, there is one racetrack (the only one), quite new (1915), called Oriental Park. Wikipedia precises: « In its heyday, American owners brought their horses to race at Oriental Park Racetrack during the winter months, and future Hall of Fame jockeys Laverne Fator rode there in 1918, as did Alfred Robertson in the mid 1920s and the Cuban-born Avelino Gomez. » 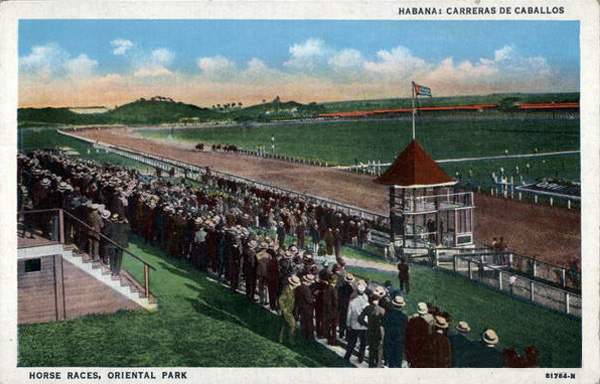 So, did George practice horse racing? I don't know. There was also a car race in April 1920 at Oriental Park. And if you look well at the picture below, you'll discern 2 people in the car. Did George and Eugene pilot cars? I *feel* that cars fit better with the Stivers than horses, but it is just a feeling, an intuition, no a fact. 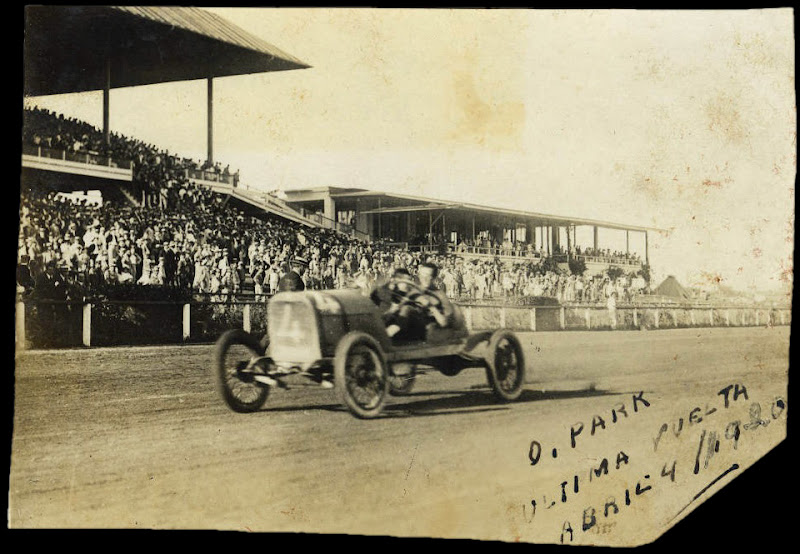 The fact is that, on an ulterior passport form (1922), George gives a bit more details, but I am not able to read what is written after the word "racing" (If someone of you is able to...). It might be the answer.

Last but not least, the 1919 passport application sheet and the 1922 one are both agremented with a picture of George W. II Stivers! We finally are able to "put a face on a name", in this "pioneers series" !! 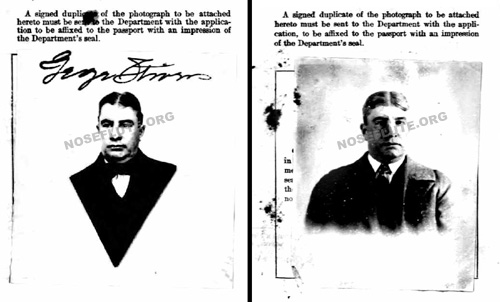 The 1922 passport application sheet is very interesting, and this, in several ways. George's occupation is still "racing" but he applies for "Commercial" reasons. He intends to visit France and British Isles. This time, G.W. asks for a passport the first of May in order to embark on the Homeric on... 6th of May. He should be back after 2 months. In fact, George will cross the sea aboard the Mauretania, and reach Southampton on 22nd of May. 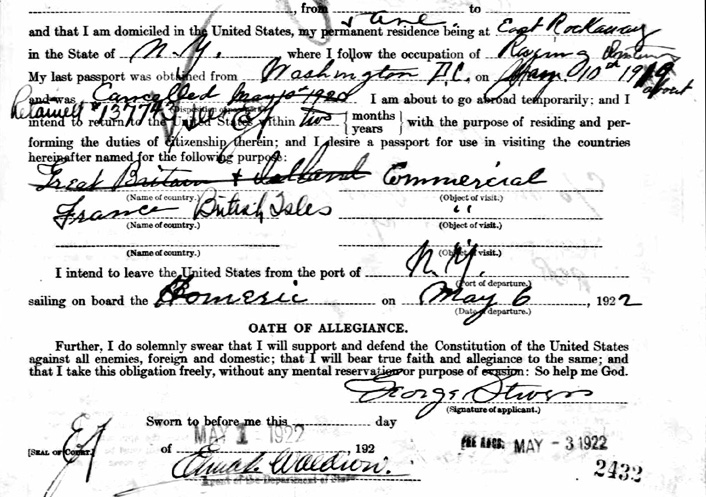 We can see on the passengers list that George was hosted in Cecil Hotel, London. The Cecil Hotel was and huge and very luxuous hotel. 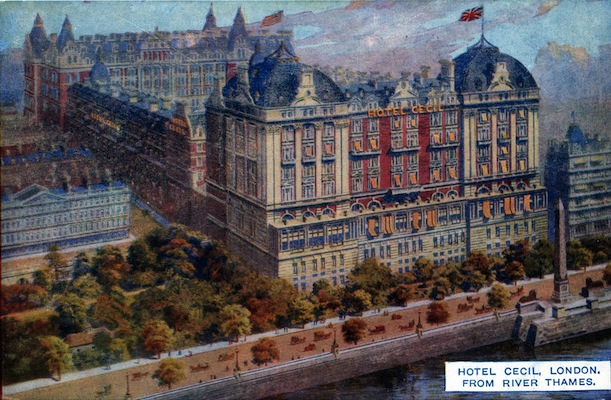 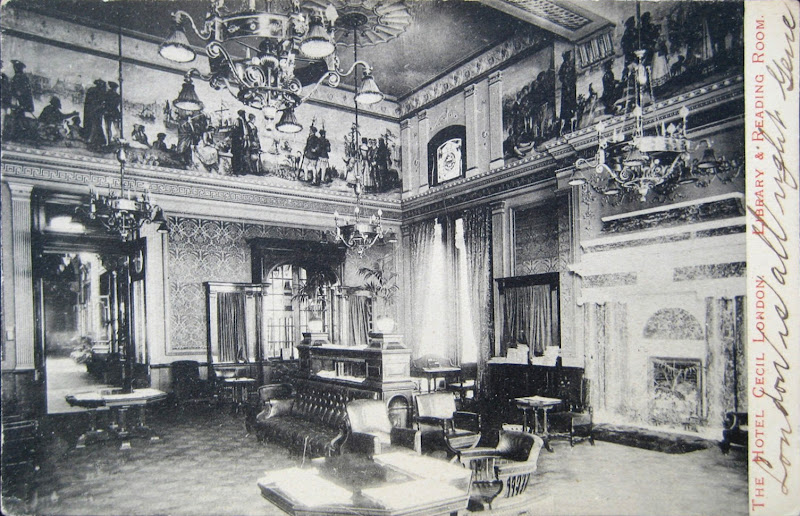 So, how can we be sure that the "commercial" Stivers was in London, Ireland and France for "Humanatone reasons"? Easy! Here is a warrant letter from the G. W. Stivers & Co., allowing George to "buy any goods with his own approval". Well, I guess George was there mostly... to sell! 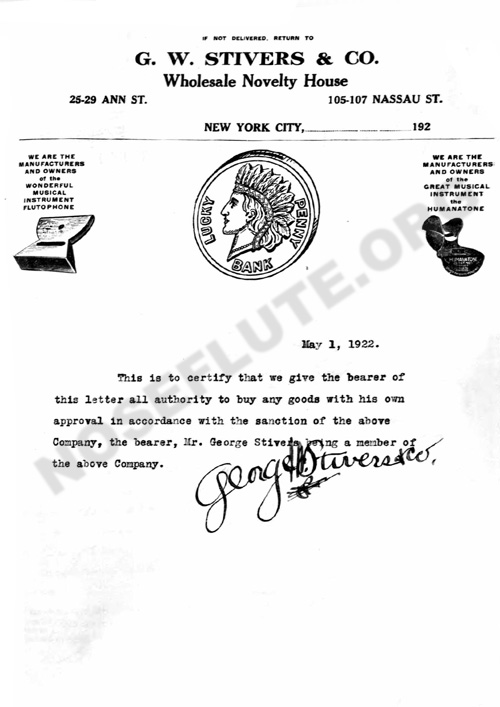 The letter heading shows 3 products that probably were ground-breaking sellers for the company.
In the middle: the Lucky Penny Bank, which was a tin bank shaped like a large and thick coin. The one below dates from 1975, but certainly uses the same concept:

The other items are instruments. For sure, The well-known Humanatone, but also the « Wonderful instrument Flutophone »

What was the Flutophone? It was another "variable tonality whistle". But the instrument was not blown by the nose, but by the mouth. So, the mouth was used at the same time to produce the flow and the note, by using the tongue as a separator of the mouth cavity. In fact, the Flutophone is an exact "shepherd's whistle", to which a rectangular horn was added. 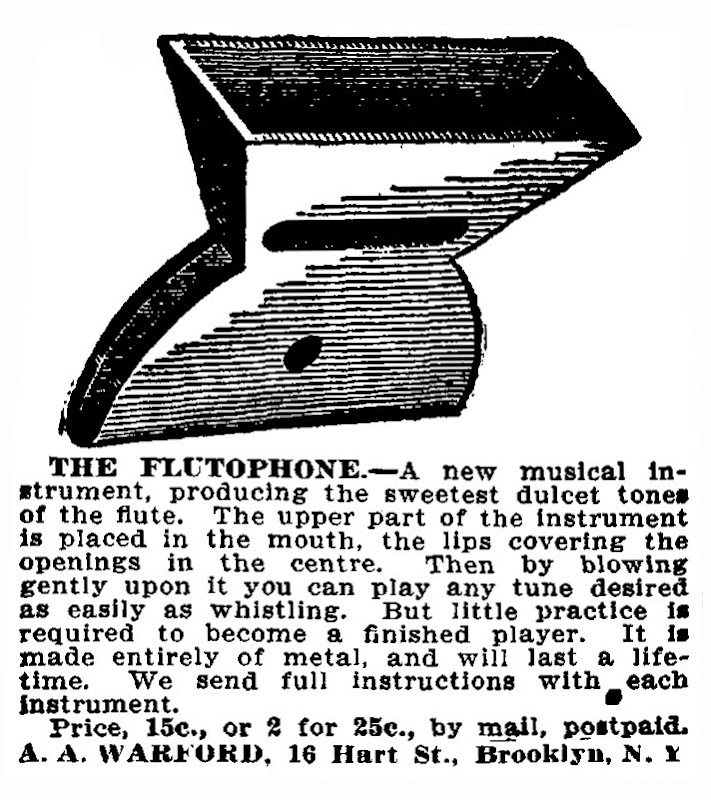 And a modern shepherd's whistle: 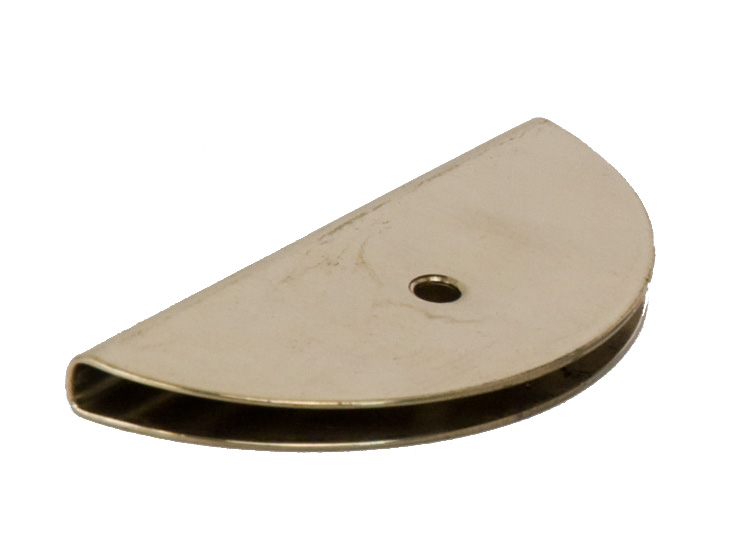 The Flutophone was invented by John A. Bartholomew, citizen of New York, in 1903. John Bartholomew was french, born from a german father and a belgian mother, in 1868. In fact, in the 1920 census, his father appears to be french, and the explanation is that at the moment of the 1900 census, the north-east part of France where he was born was german, since 1870 war and until 1918. Yes, from my region!). John imigrated in the USA in 1870, maybe because of the war. In 1903, Bartholomew was ventriloquist and widowed (later, he'll re-marry and become a comb maker!).

Well, the Stivers bought the Flutophone patent [US733,122] to exploit it, and become owners and manufacturers of the instrument. When was it? Certainly rather early, and maybe when James J. turned the Stivers' shop into a music instruments one.

1922 was already late for George W. II Stivers to visit Europe. Maybe did he do it earlier too. Anyway, in the early 1920s, the Humanaphone appears in the Keith Prowse catalog, London, then in the Jedson list. The fact is that the Humanaphone is very similar to the Humanatone... Was it a copy, or did George sell a licence to a british manufacturer, who also decided to produce a celluloid line?

In fact, the two instruments are rigorously the same ones! Generally, to avoid problems with copies, the manufacturers prefer to change some small details. Here, everything is the same, stampings excepted: even the shape of the flaps that hold the rivets...

And in France? I know there was a metal nose flute introduced in the 1920's. I have no name, no picture, no info. Was it a licensed Humanatone?

Licensing would have been a good trick for Stivers. Not only spreading the instrument in Europe, but also being discharged of paying for patents, since the ones used on the Humanatone applied... only in the USA! Big money to come (again)!