The Stivers: The Humanatone Era

1903 is the year of the appearance of James Joseph. He is 22 years old, his brother George, 27, and their father 49. It seems they have already made a good bunch of money with the G. W. Stivers & Co. and its wholesale novelties store at 15 Ann St. (+ annex 108 Nassau).
It seems that George I wants to spread his activities, and still in the novelties business, opens a stationery 1427 Bath ave, near the seashore and the golf (that's probably also the moment he buys an hotel...). And the Ann street store is more or less put in James J.'s hands who turns it towards... musical instruments. 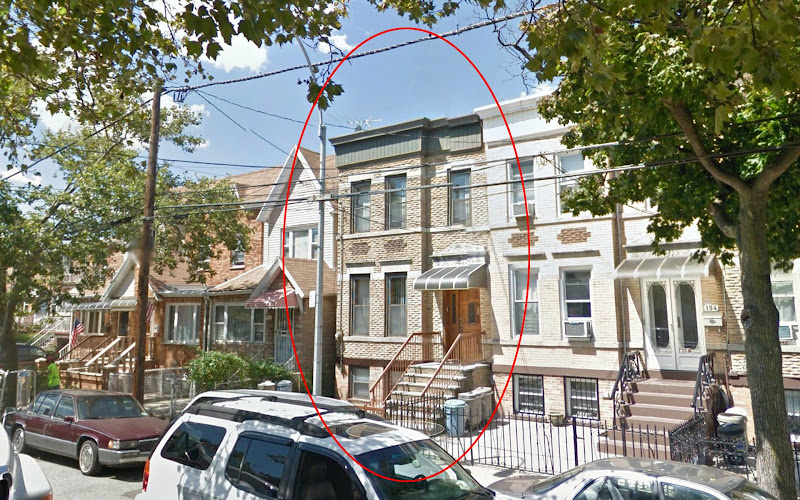 In september, James J. is searching for a pianist, single and willing to travel: Indeed, the Stivers are launching the Humanatone! And skilled in business as they are, they know the New Musical Wonder will sell only from demos...

The store probably already propose Humanatone: remember that on the trademark file, J.J. Stivers wrote « This trade-mark has been continuously used in my business since July 6th, 1903 ». Indeed, in September, this article is published.
The very first box is probably this one, with no specific logo, but the store address printed on it, and the first instrument, the one with no patent numbers stamp, but the mention "The New Musical Wonder": 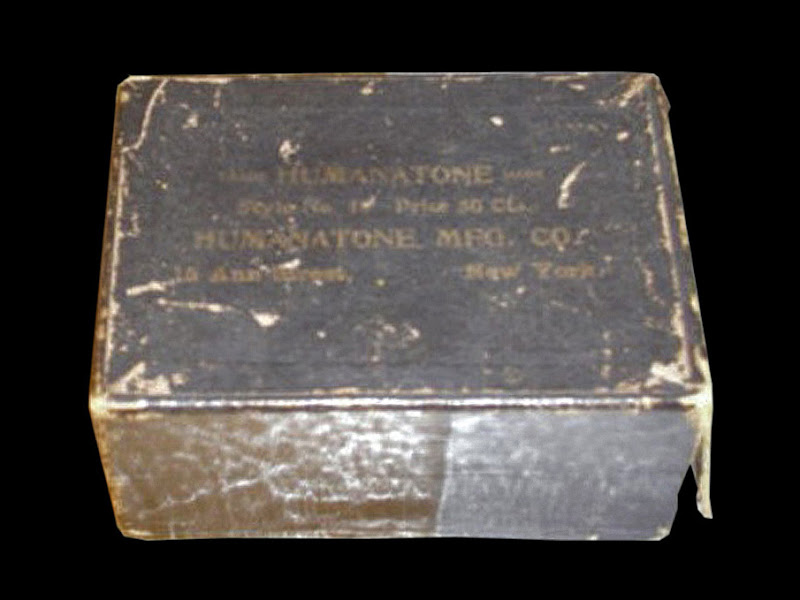 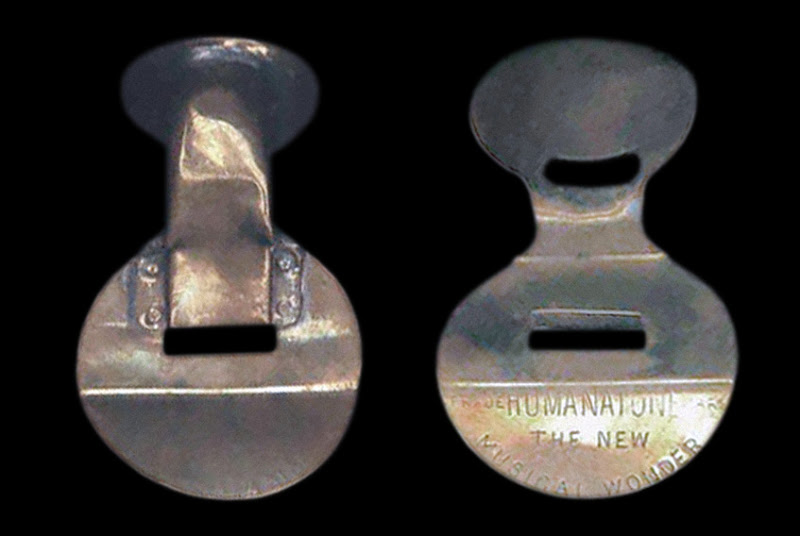 This nose flute stays a mystery... Who designed it? Did the Stivers do the improvement job themselves from another nose flute? Which one? Couchois' one? Another one? Did they bought the (already existing) brand Humanatone? Or what is not a brand but just a name? Who invented it? Many many questions. However, it may possibly be the sucessor of the Magic Nose Flute, which had a very similar shape, and was already available in the 1903 A.O & E.C. Howe (Chicago) catalog (which was printed in 1902...):

At the same time, James founds his society, the Humanatone Introducing Novelty Co., which will be registered in 1904. He will be president, and George W., that I suppose to be George II, vice-pres. There is third director, a certain John H. Dreyer (I was not able to find info about him). The main office is located 31 Park row, one block from the Ann and Nassau st. stores, South Manhattan.
The capital is $15,000, which would correspond to $400,000 nowadays... A real machine of war! Office near Broadway, famous name in novelties business, and a real sense of marketing. Ready, go! 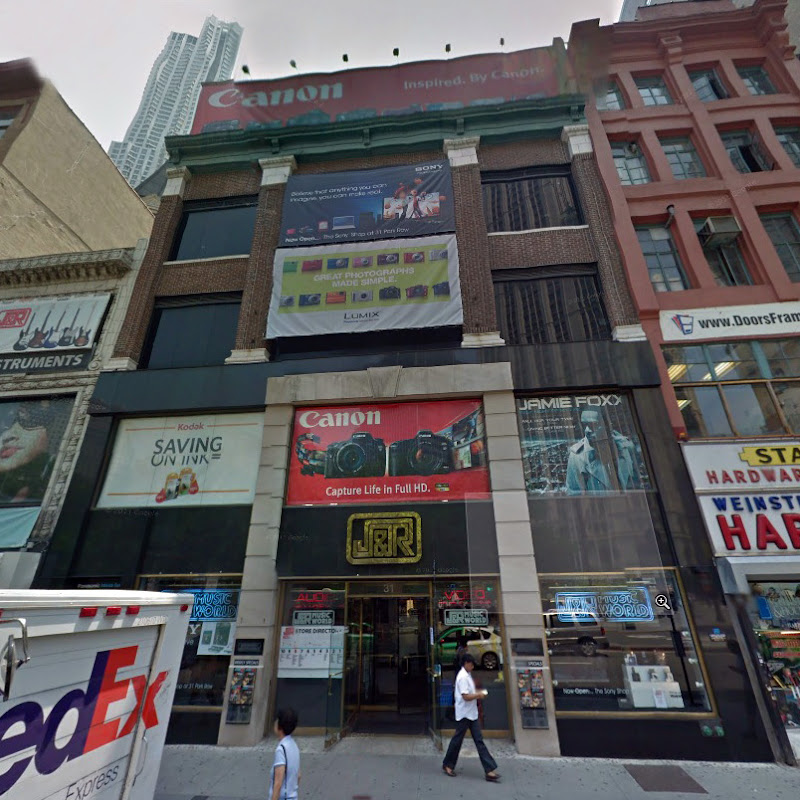 The instrument is presented during or parallely to music hall performances: 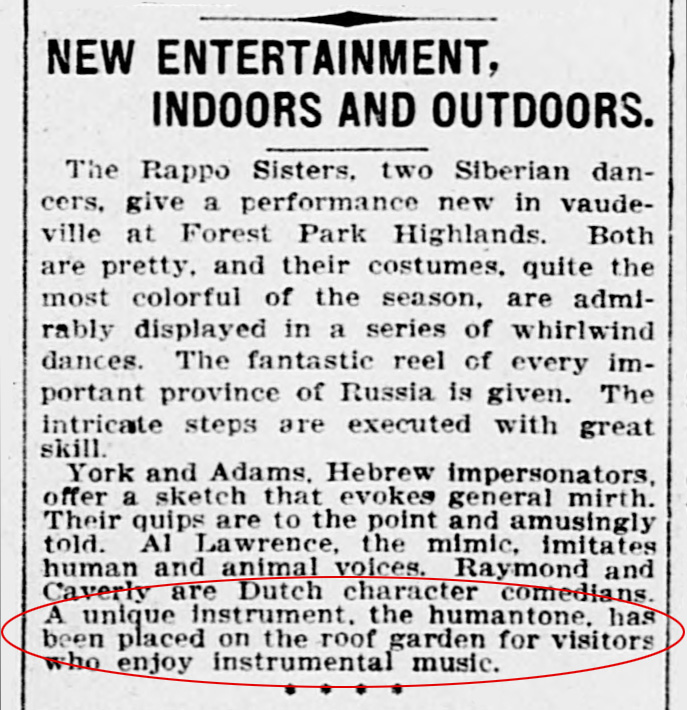 But the trademark is renewed April 18, 1905 (45056, reg. Aug. 1, 1905), under the new denomination ("A nasal wind musical instrument"), and above all with a new typo and real logo: the name Humanatone floating over a lion rampant, grabbing a tuplet of semiquavers, like playing an harp, which will from now on figure on the nose flute box.
Note that there are already differents "styles" (and prices) of Humanatones. I supposed they depend on the finish (nickel plated, painted, and so.) 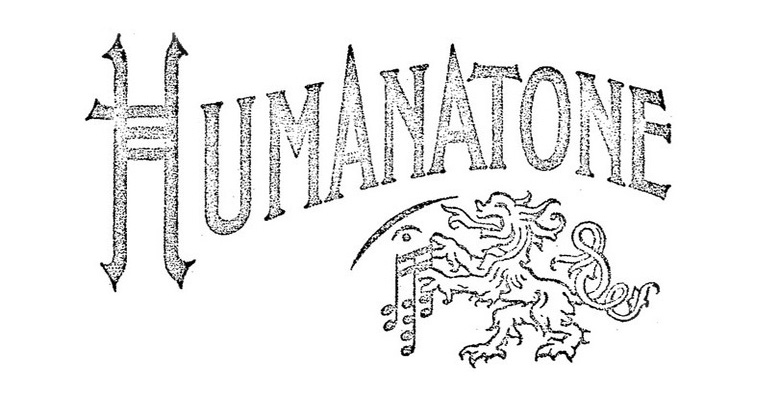 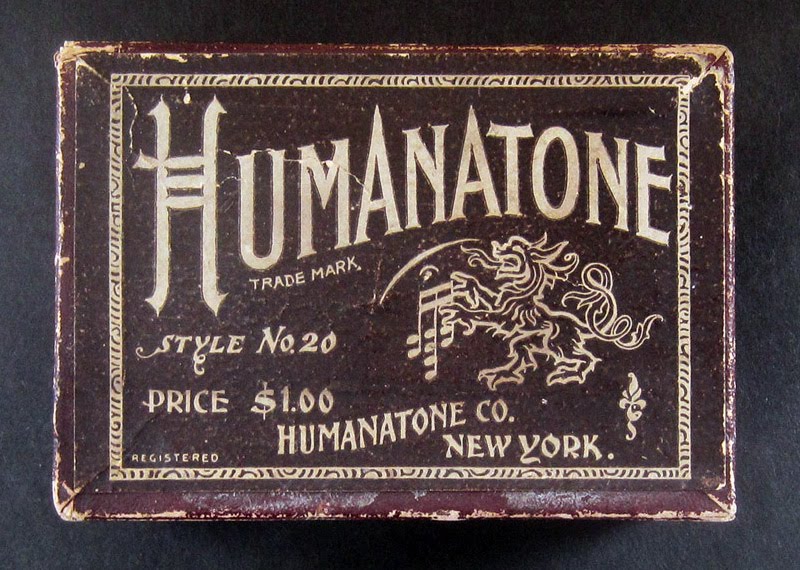 Where the hell does this "lion rampant" comes from? Well, eveybody's allowed to choose a lion as an emblem of majesty, power, force... My opinion is it was a rebus! And was probably invented and designed by George II, the steel engraver.

« In early 20th century English slang, a stiver was any coin of little value. », dixit Encyclo. Remember that Kathryn, George II's wife, is English, and certainly was aware of that meaning. Quite ironic for a family having made big money with "medals of little value"...

The noun 'stiver' is also used in the famous poem by the famous Robert Browning, "The Pied Piper" of Hamelin" (1842) (funny no? a virtual link between the Pied Piper and the nose flute!:).

And what was a "stiver"? The Stiver was a dutch currency. And on the obverse of the coin of several stiverS (with an "s" at plural), you can see... a lion rampant: 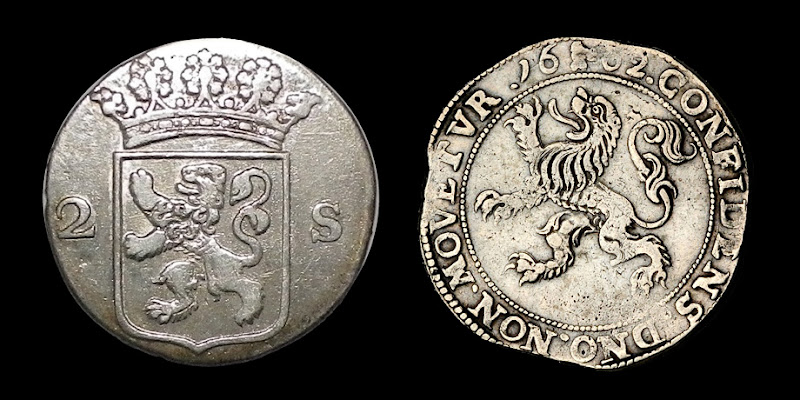 A steel engraver like George II was had books of patterns, heraldry designs, and so on, and was certainly aware of that. Note how the tail of the lion forms the "S" of 'stiver' and how - even spruced up - this letter-shape was kept in the Stivers' logo (engravers have the perfect eye for that!). But look also how George added a pair or ears or horns, and a bifid tongue, giving the Humanatone lion a touch of demoniac look...!

Success grows slowly (the world is large!). The two companies (G.W. STivers & Co and Humanatone Introducing Noverlty Co. coexist, and the Stivers do not sell only nose flutes! They continue to be wholesaler for numerous novelties. James is specialized in music instruments, and it seems (it certainly be the case later) that Geo. II has become commercial and representative.

In 1907, a certain James Stivers is arrested for having stolen a diamond pin: 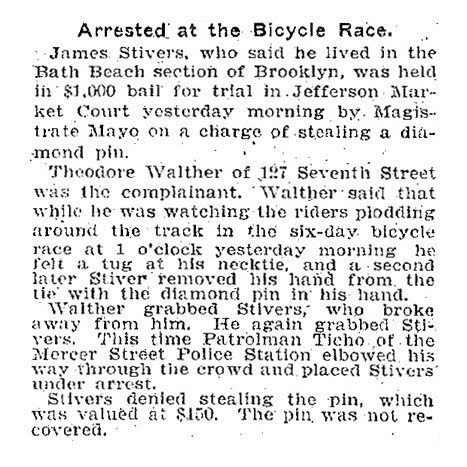 Is it "our" James? Well, the name "James Stivers" is rare, the stealer lives in the same district than James J. ... but it is difficult to imagine our businessman as a vulgar pickpocket, a 'fakir', no? However, the next year, there is no doubt it is really Kathryn Stivers, James' youngest sister (she's 17) who has to deal with Justice, with an angelic explanation: 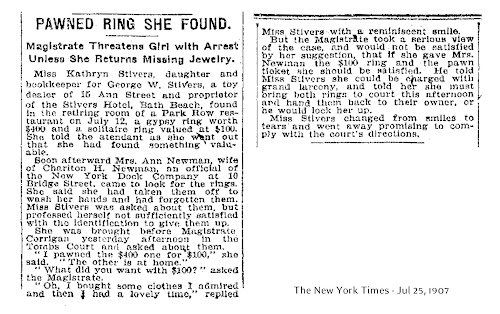 What's interesting is that we learn that George-father is still the boss of G.W. Stivers & Co. and that he's the owner of the Stivers Hotel, Bath Beach.

1908 is the start of the boom. The Humanatone Co. puts on a spurt on the nose flute. It recruits several demonstrators, and organizes shows: please check this post.

The Humanatone begins to enter music catalogs, meaning it is now diffused everywhere in the country, and also abroad. Here in the J.W. Jenkins' sons Music Co., Missouri.

The company has another great commercial success with its Merry Widow Handkerchief. As done for the Dewey's celebration in 1899, the Stivers surf the « germistic effect »! An operetta, The Merry Widow, by Franz Lehar, was first performed in Vienna, in 1905 and became the biggest international success of its era. For its coming to America, many novelty companies have launched new items. The Stivers commercialize the Merry Widow Handkerchief, a mischievous... well, you'll understand by yourself: 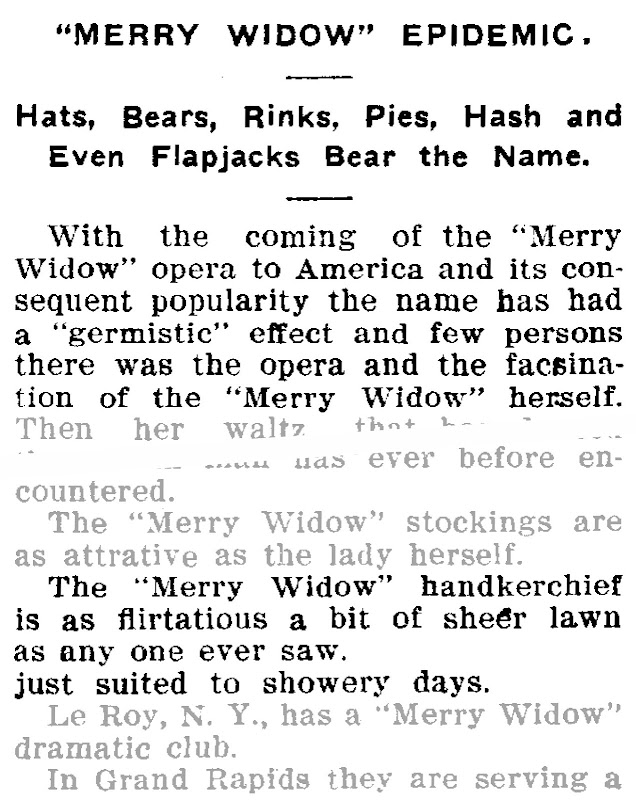 1908 is also the year of another commercial hit for the Humanatone Co.: the Red Dwarf pen, produced by D. Wood & Co. 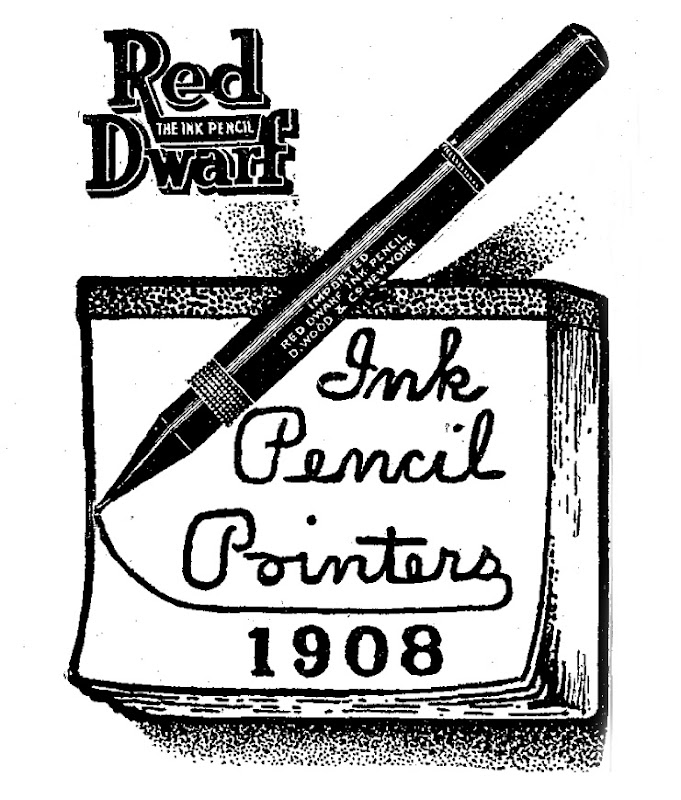 Those early catalog entries show that the Humanatone was firstly regarded by Stivers as a musical instrument only, and not as a toy. The tremendous success will arrive when the nose flute is present in the novelties and toy catalogs.