Sequel of the posts RON, an Ergonomic Approach - Part I and Part II


6 - Clay Fat Cat Hanabue No. 511
Based on the same functional shapes than the ones used for the simple tile clay nose flutes, Yoshihiro Sawada has begun to model hanabue with different frontal look, notably fat cats flutes, like this great and funny No. 511:

Nothing more to add, since the technical aspects are the same than for the tile nose flutes. But take a look at this beautiful shadow!: 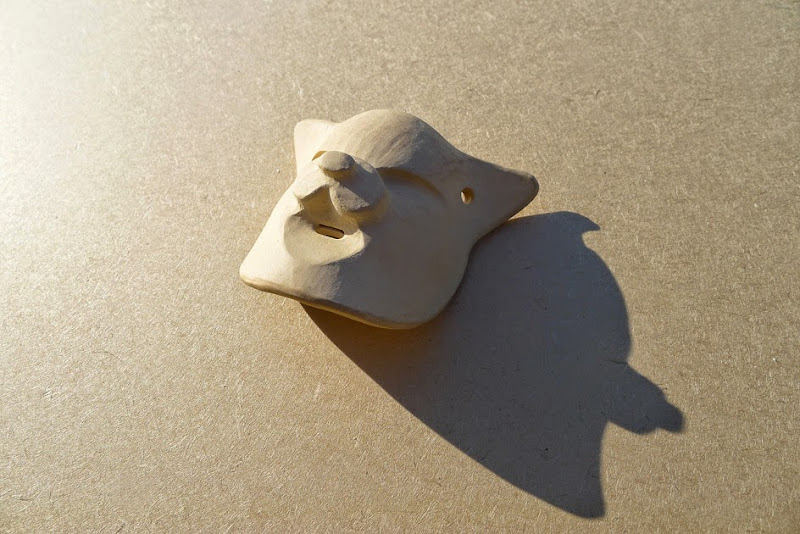 7 - Clay Double Hanabue No. 517
This is a very interesting innovation, a double nose flute. No, it is not intended to be played by a lovers'duo, nor by siamese twins. It is a double-intonation flute. 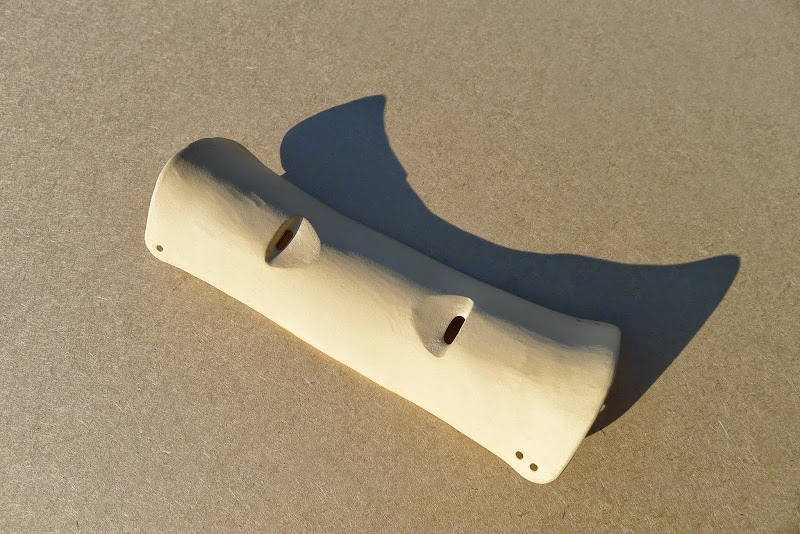 It is shaped as if it was cut in a bamboo stem, just between two nodes (竹の節 - Take no setsu)! This flute is very long, and is really modeled as if two regular tile-flutes had been merged together by their base. Thus, the two ends are two heads, no bottom.

And why this peculiar disposition? You have already guessed: it's in order to provide a double intonation. Indeed, the two fipples are different, one is smaller than the other and thus, produces a range of tones a bit sharper.

This tall double flute is obviously a bit heavy, but is also made from a thin plate of clay, and can be held with a double cord.

Doesn't it look so Japanese?: 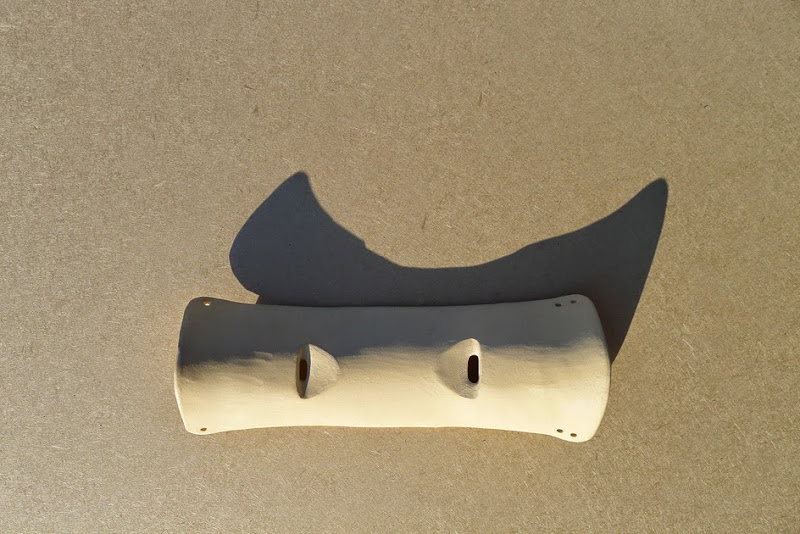 
Sound
Here are some sound samples I gathered altogether, in order for you to be able to compare. Please, remember that I am a nose flute lover, but I'm not a great player at all... They are just sound samples, not musical tunes.


RON's blog
Mr. Yoshihiro Sawada has invented other shapes, and thus has designed other templates for his cardboard nose flutes. He's used to share his new creations on his blog (ron87bue.cocolog-nifty.com/blog), notably the mask series (nose flute covering the entire face), including a beautiful cat! 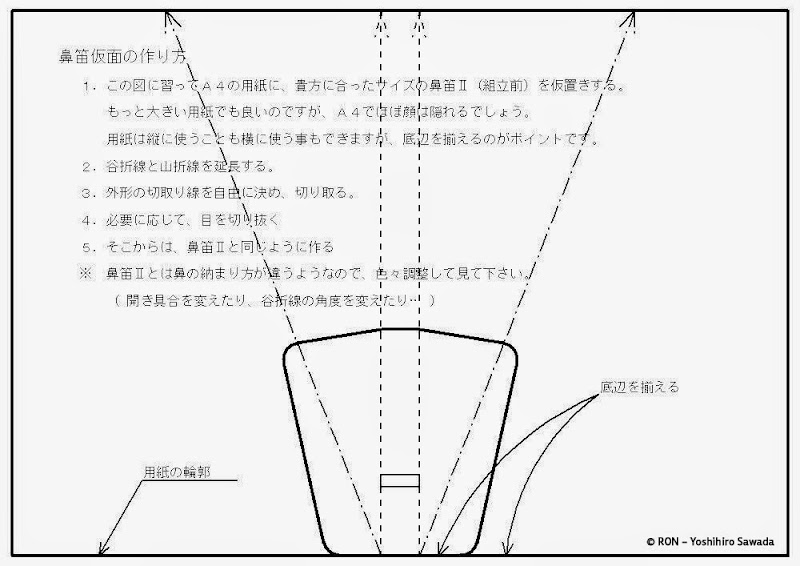 And if you want to see and hear how the Cat mask looks and sounds, no better ambassador than the master Mosurin himself!:

Dear Mr. Sawada, we will take great care of your beautiful nose flutes, thank you a lot! 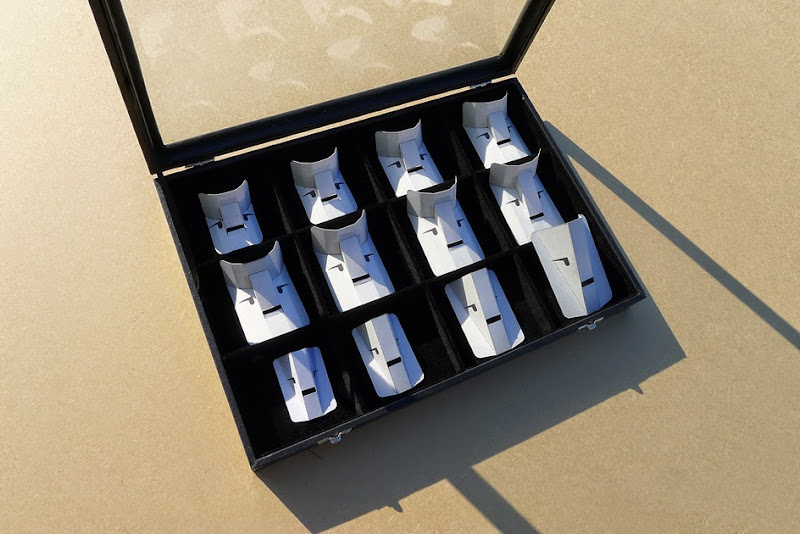 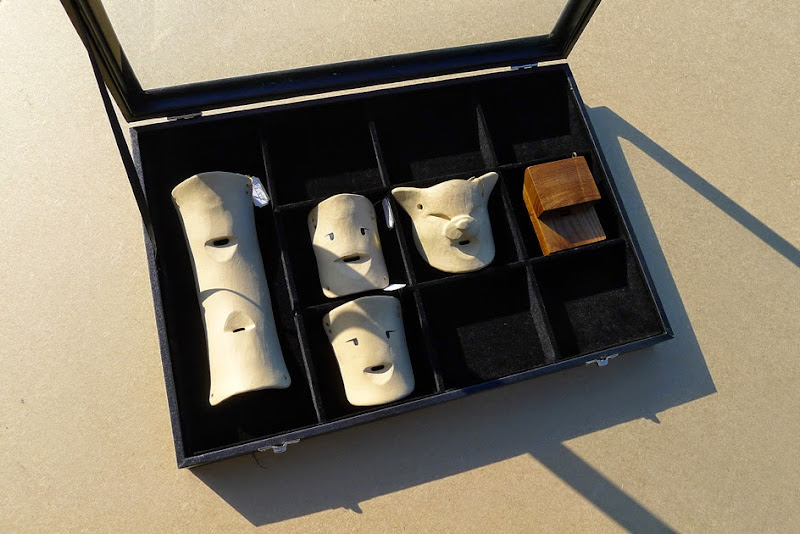 
On the same topic: