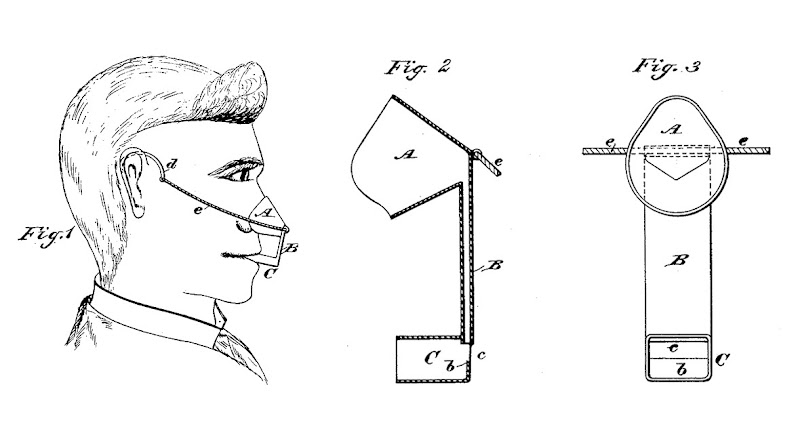 Someone who looks at the patents drawings in the purpose of reconstructing the Nasalette should get into a lapse of perplexity. Indeed, when comparing the 2 profile pictures, it becomes obvious that the proportions are so different, that a choice will have to be done.
The "technical" figure, more detailed, should be the true one, but it clearly appear totally non-functional: if the nose cap is big enough to cover the nostrils, the air duct is so long that the mouth tube gets in front of the chin... The sketch presenting the player's head shows a poorly designed nose flute, but the draughtsman was obviously forced to respect true proportions. 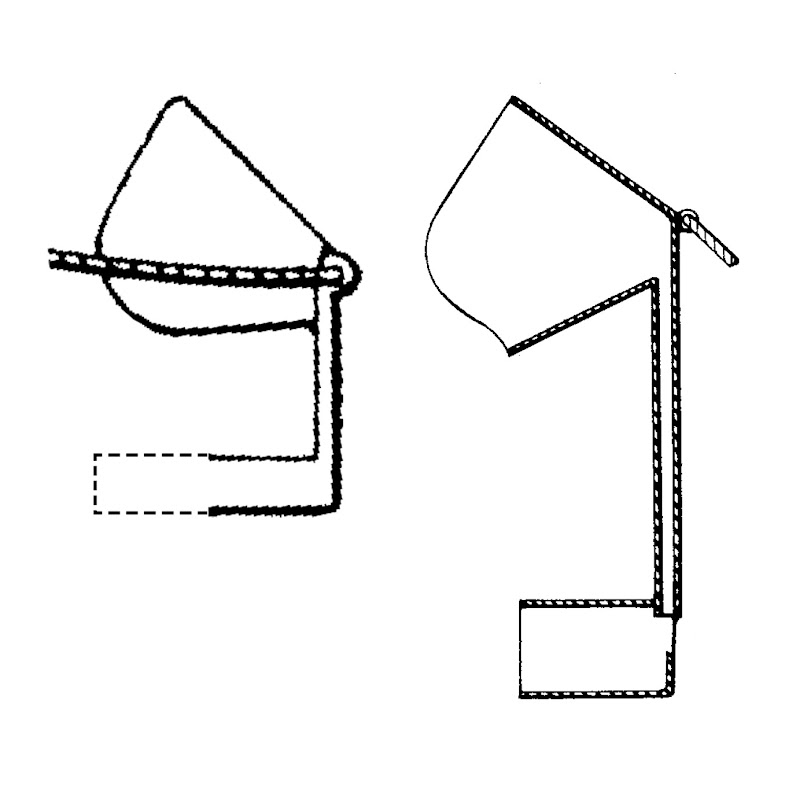 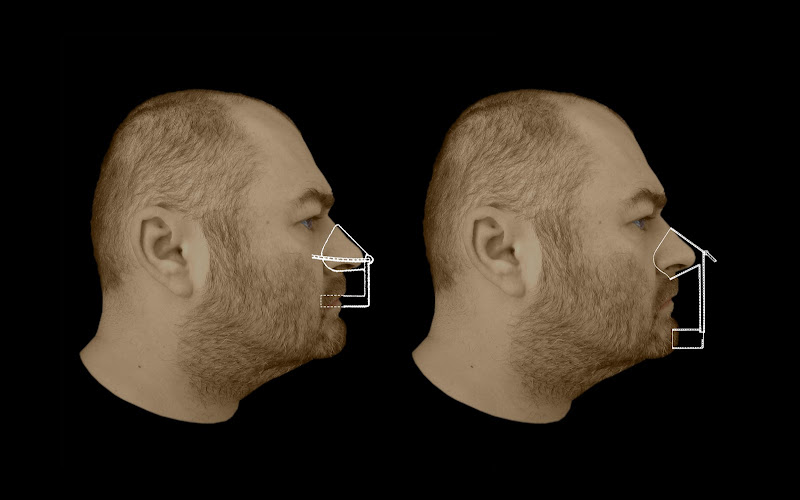 There is no particular specifications detailed in the patent text that could help us, besides the description of the materials:

Since William Carter was a tinsmith, I decided to make my Nasalette with tin plate. To get a nice tin, easily weldable, I order some tin plates dedicated to model making. Very funny: the brand is "Albion Alloys" (the Nasalette was invented in Albion, NY.).

So, my choice was this one: to stay as close as possible to the technical drawing (notably regarding the ergonomical and technical details), but keeping the proportions of the profile sketch. I also assumed that the Nasalette was functional (else, would Carter have filed a patent?) and thus, I would change little details if they were necessary for the flute to whistle.
My goal is not to build the best nose flute in the world, no, but to build a Nasalette, the closest possible to the original. So I will not try to improve the model (by making the air duct slimmer at the end, etc.) No. It's archeology, not engineering.

Well, my first job was to draw a template for the nose cap. On the profile section, one can see it is a sort of truncated cone, with an ergonomical cut on its largest rim, in order to fit closely the nose and the upper lip.
On the rear section, we can see the "egg-shape" of the cone, and also a triangle (just below the mark "A"): this is the shape of the air exit.

So, the nose cap is not obvious to design and to shape, and it took me many tests and trials with cardboard to get the perfect cap template. And finally, it looks exactly like an hippo butt :) 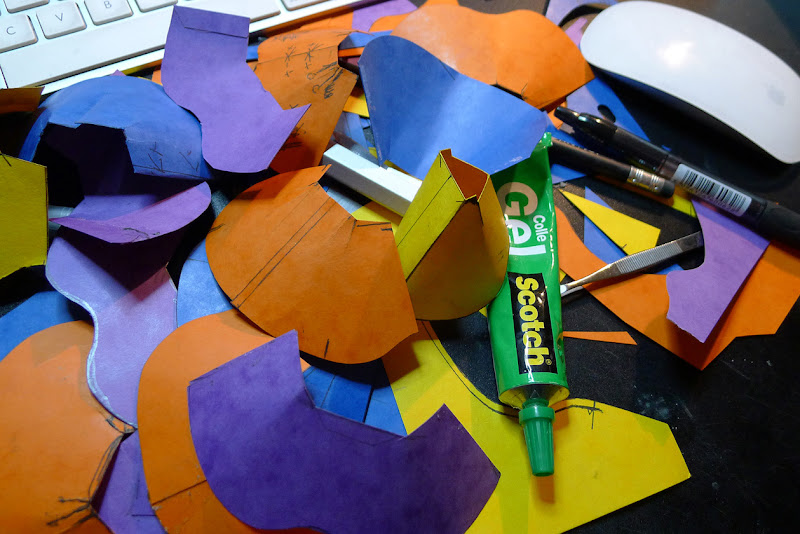 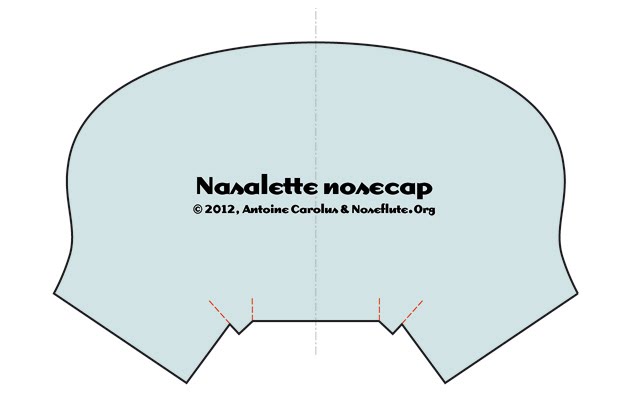 The airway was easy to make, since it is a regular parallelepiped, with just a triangular scoop at the junction. However, I made it according to the external specs: my cardboard is much thinner that my tin plate (0.5 mm thick). So my cardboard air duct is not functional (doesn't matter) [I changed the template of this part afterwards] 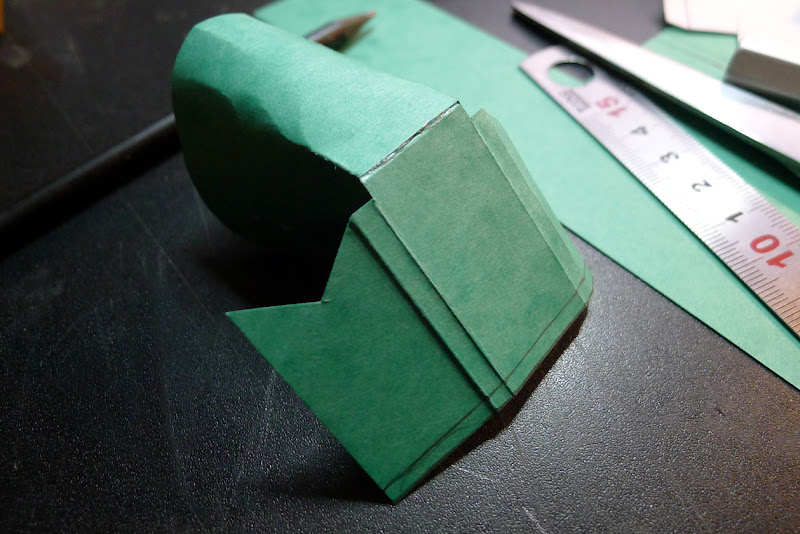 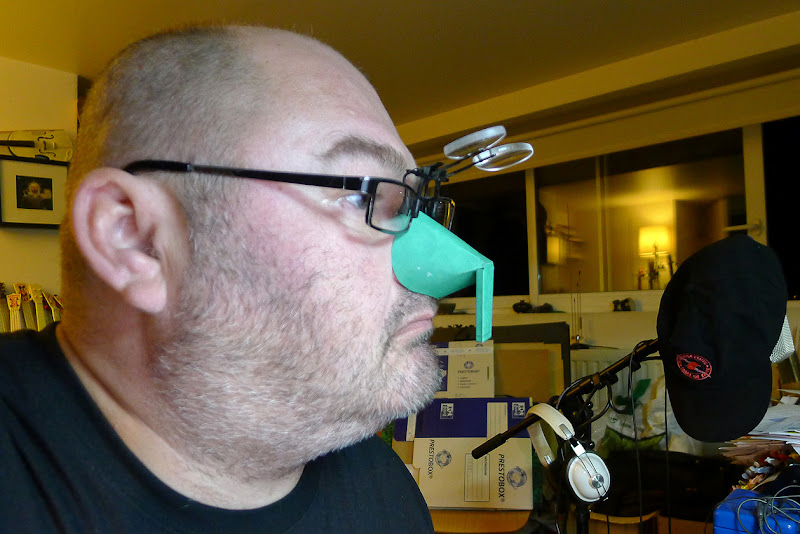 Then the mouth tube. It is parallelepipedic. The real question is what were the specifications for the labium? Was the labium slanted? Well, the patent technical drawing shows that :
- the front plate of the air duct is lightly forward the front ot the mouth tube (bayonet) [see A in the pic. below].
- the labium seems to be beveled towards the front, but it surely is an artefact of the crosshatch drawing itself [see B in the pic].
However, the description use the word "reed", so it could have meant it was beveled. Anyway, this detail is really insignificant with a 0.5mm thick tin plate. 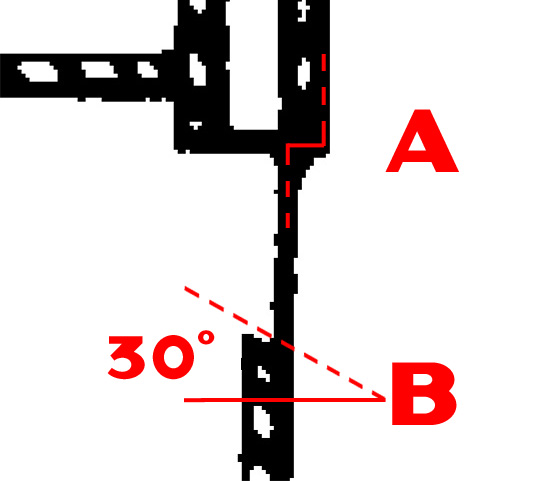 So, I completed my cardboard model with the mouth tube, and added a small rod on the end of the cone, plus 2 ear rounded wires connected to the flute by cords (they will have to be made of rubber on the definitive construction). 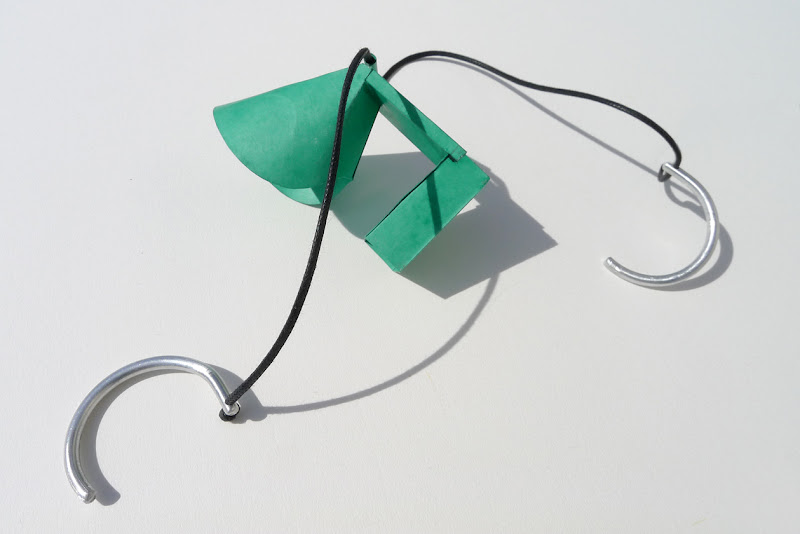 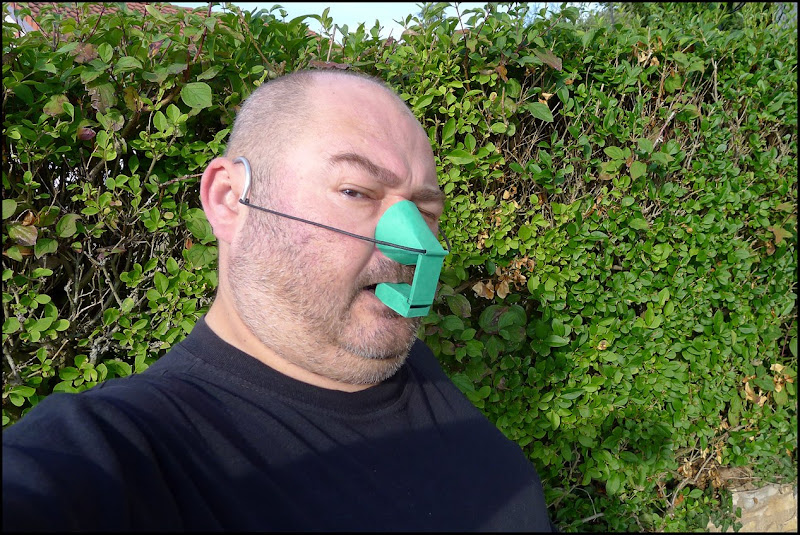