[Sequel of the post The Nasalette: drawing a template]


I am not a tinsmith, and it was even the very first time I worked with tin sheet. I made 2 Nasalettes: the first one was disappointing, dented, with some ugly weldings. More, the first template gave a nosecap too large. I also redesigned some pieces during the first try (it was an evolutive process). This explains why the (three) pieces shown in the first pictures are not the same that the (four) ones visible in this definitive template : 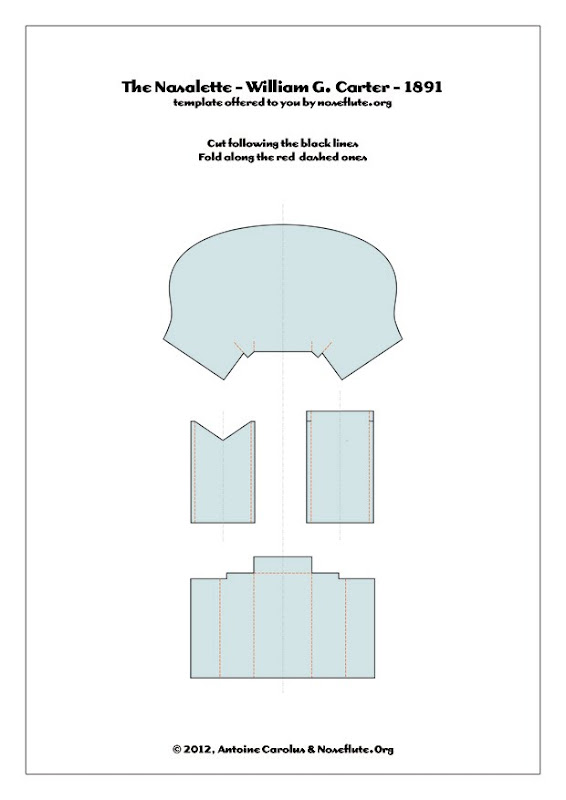 By the way, if you want to build a Nasalette, please download here my template in PDF format and offer me a beer next time you see me.

I cut the pieces of (the first version of) my paper template and glued them on the tin sheet with latex glue (easily removable). I had to buy a pair of shears, and cut the metal pieces, then filed and sanded their edges. 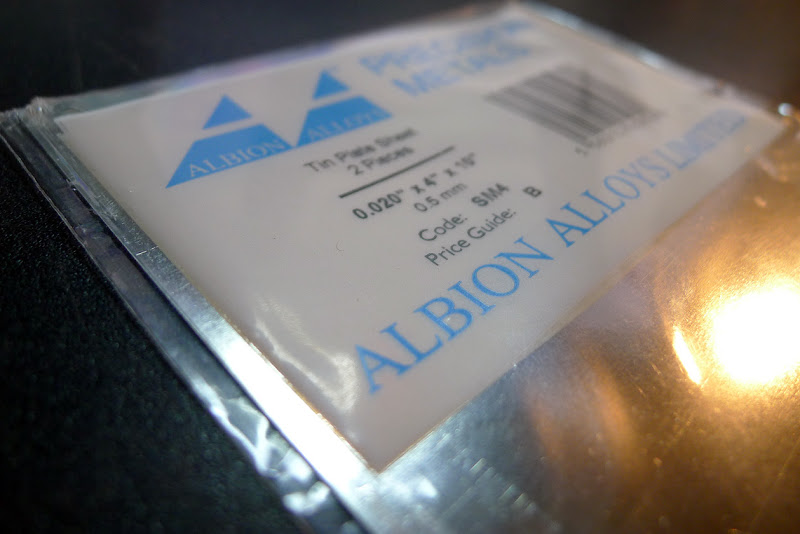 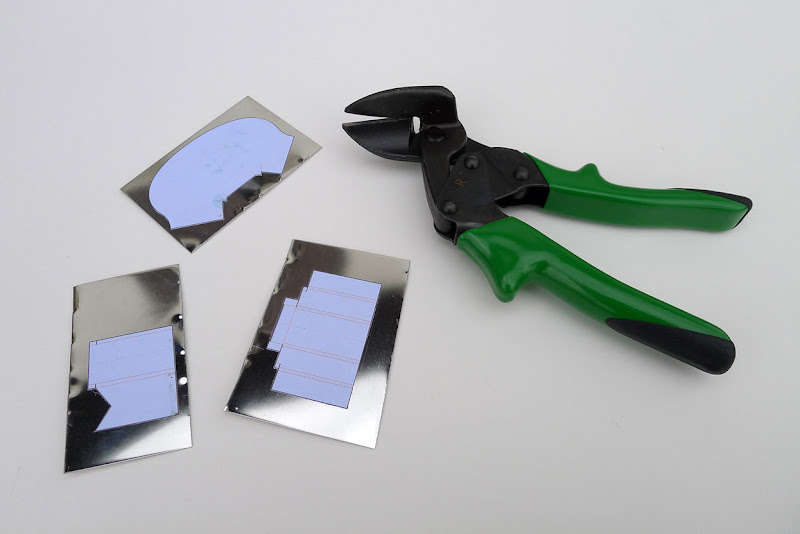 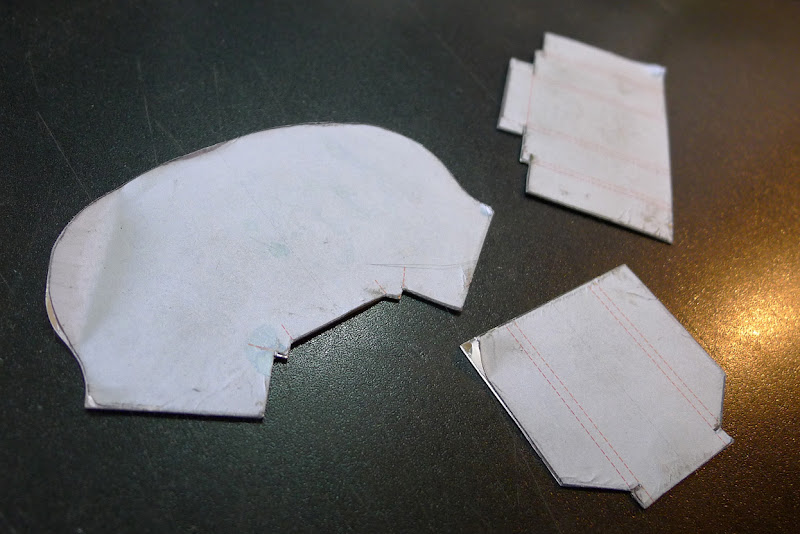 Then I had to bend the pieces. I didn't have the correct tools for that. Tightening them in my vise and bending them by force, would have driven to damaging them, because of the grooves on his jaws. But I found a "thing" (I even don't know exactly what it is) which is smooth, square angled, very strong and very tight, and of the perfect size to be hold by the vice (let's say the perfect tool for bending small tin pieces!).
So I bent my pieces by hammering them around the "thing" 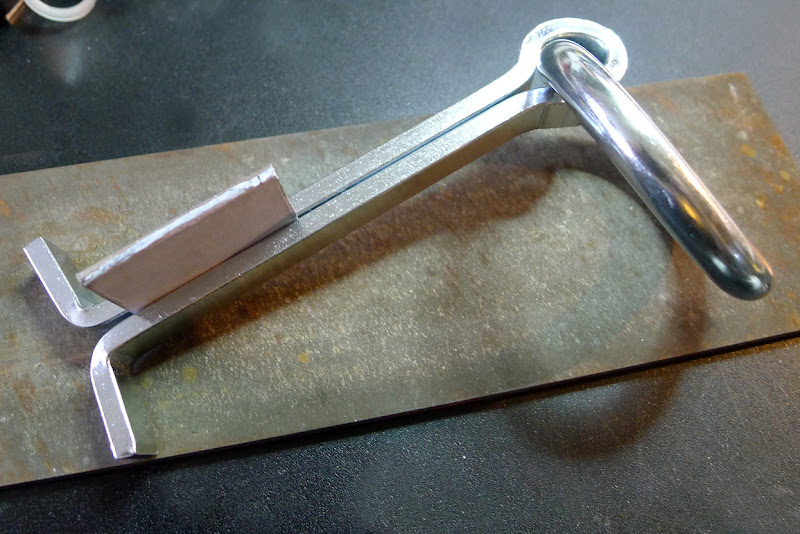 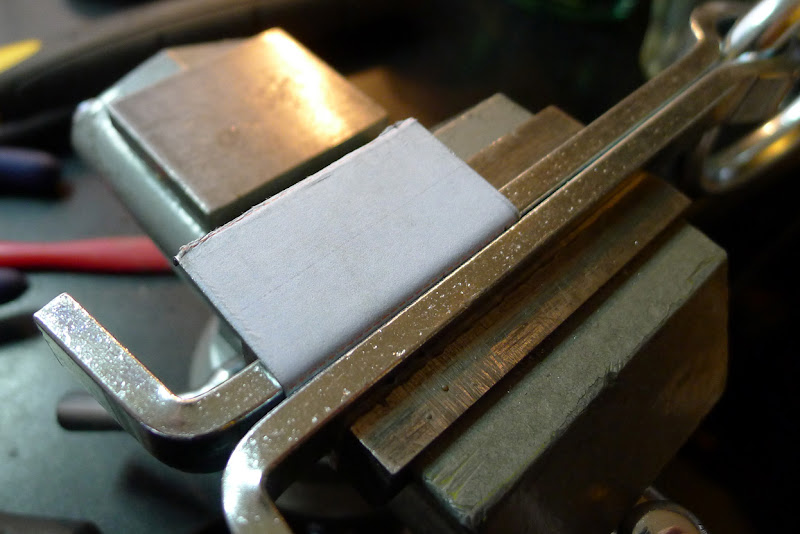 ... and began the difficult nose cap. First, I marked the beginning of the bendings (it is bent at one end, and rounded at the other...), and use smaller and smaller bottles to round the properly the cap. 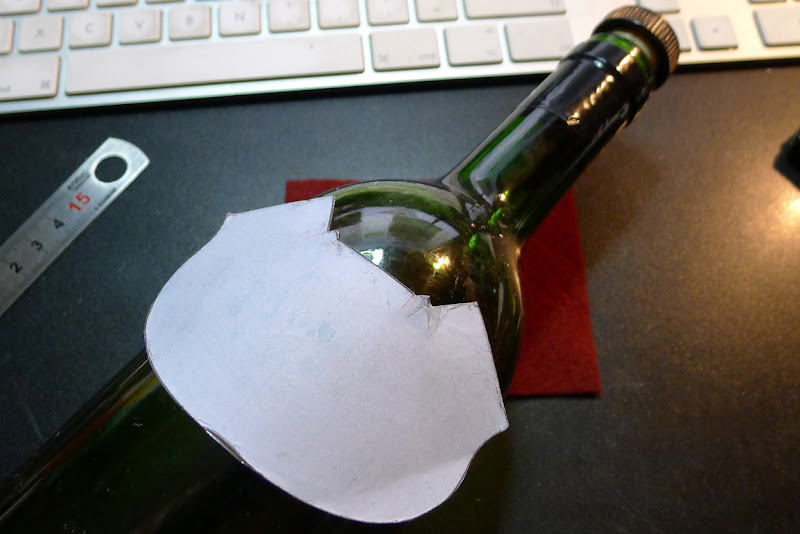 I got a first shape, and then ended to form it with pliers. 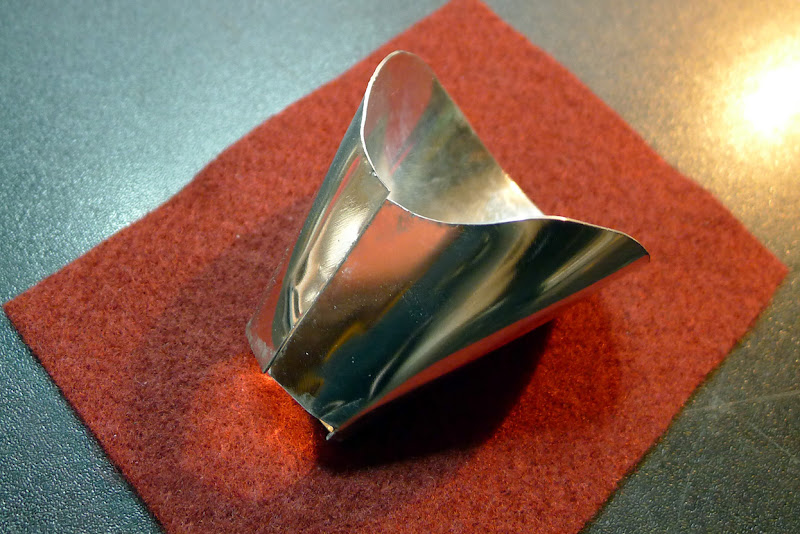 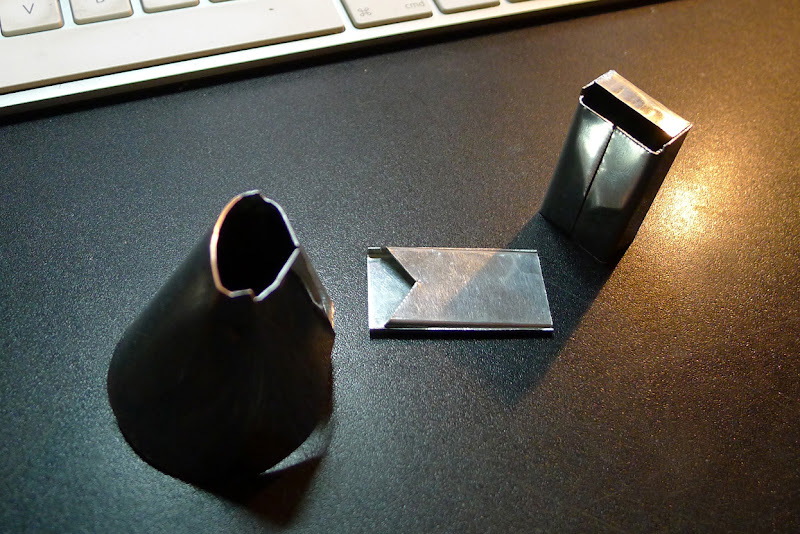 Then, I had to weld. On my first Nasalette, the results weren't at the quality level that I expected.

And so, I got the "whistle" (already working while blowing it and clogging the mouthpart), by welding the airway and the mouth tube, exactly like on the patent (the front plate of the air duct a bit forward the one of the mouth tube). I closed the nose cap by welding too: 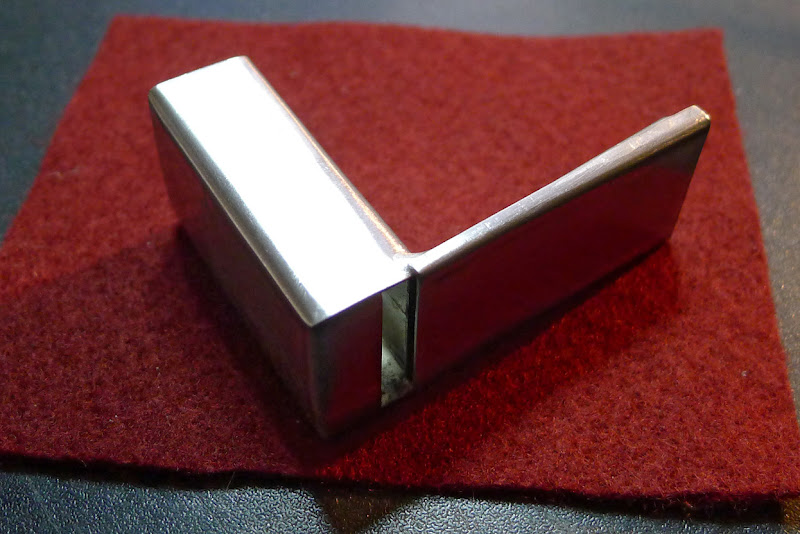 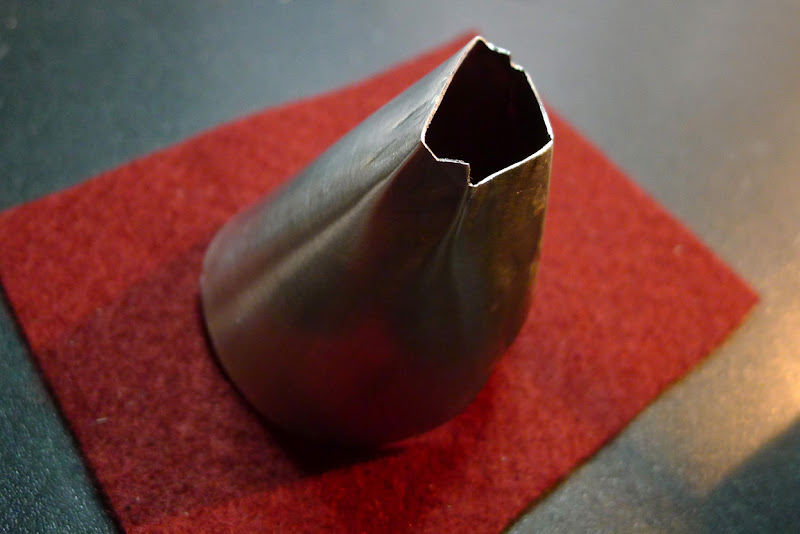 I welded the cap and the whistle, then added the little tube for passing the cord... and got my first Nasalette. 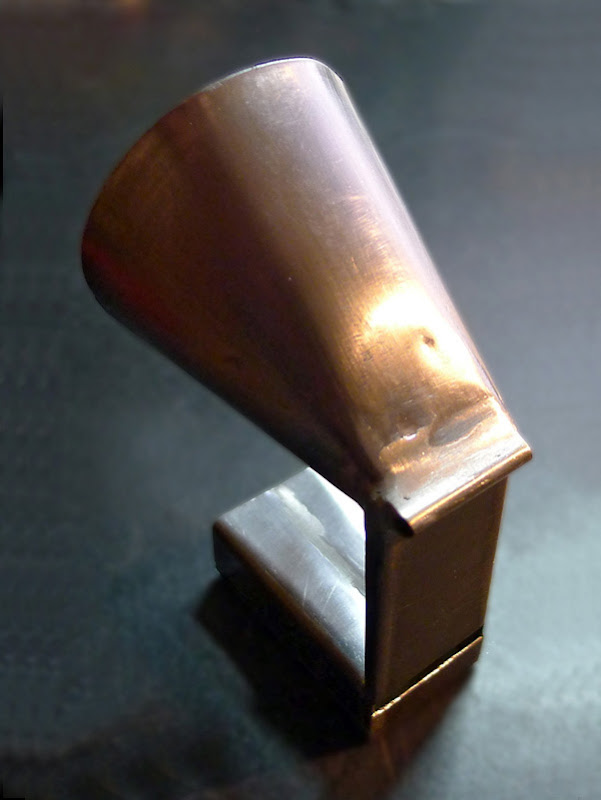 Well, as told before, I was very disappointed with the result. Ugly weldings, nose cap dented and worst: my Nasalette didn't whistle. Indeed, the nose cap was too large (I had forgotten to pinch it in an egg-shape!), and there was a huge air leak. Because of the Nasalette design, the nostrils are far from the air entrance, which forms a real angle. So, to much space around the nose leads to a huge air leak.

So, I decided to redesign the template of the nose cap (make it a bit shorter), and this time, not to forget the "egg shape).

The process for the second Nasalette was clearly the same, apart of that I had gained experience about the "bad tricks" of tin sheet as a material. I was able to make clean weldings, and to avoid denting the parts with my pliers. 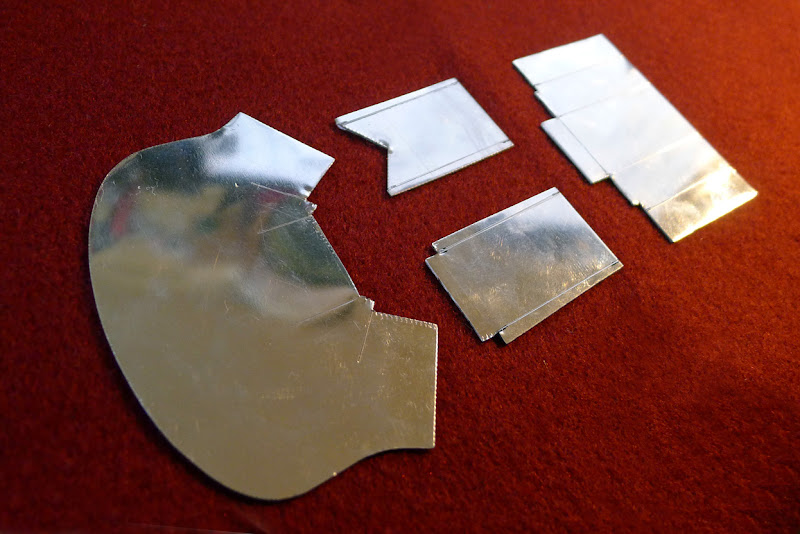 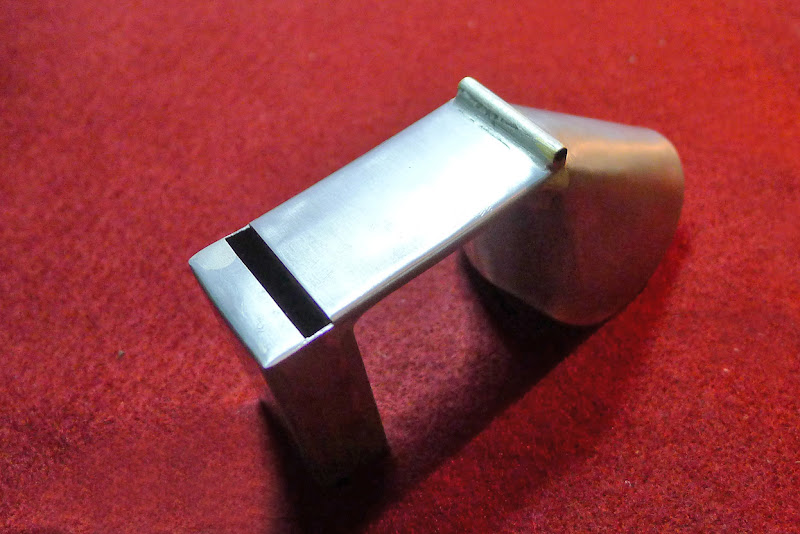 This time, it worked! It was a bit weak, because of air leak (again!), so I decided to glue a felt pad inside the nose cap, in order to get a better hermeticity, and to improve the comfort.
Then I placed a elastic cord in the dedicated little tube, and attached the 2 ear wires I had made for the cardboard test.