Sequel of the post Austopfon / Néo-Flûte, a Real Mystery! - PART I 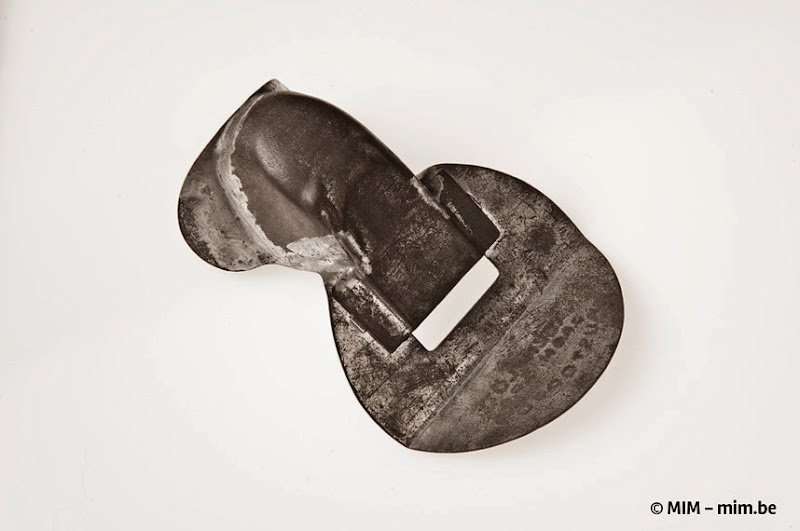 So, we order some photos. Indeed, this article is the most expensive of all of the posts of this blog, since I ordered specific photographs, with detailed requests for the background, the angle of view, etc. It could have certainly been cheaper to buy a real Austopfon :) But all was kindly made according to my requests.

The first interesting picture is obviously the one of the back of the nose flute, showing the stampings: 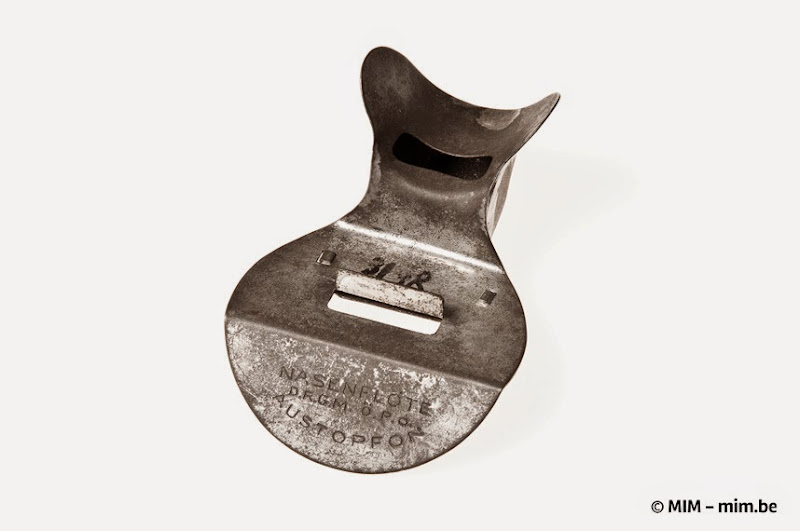 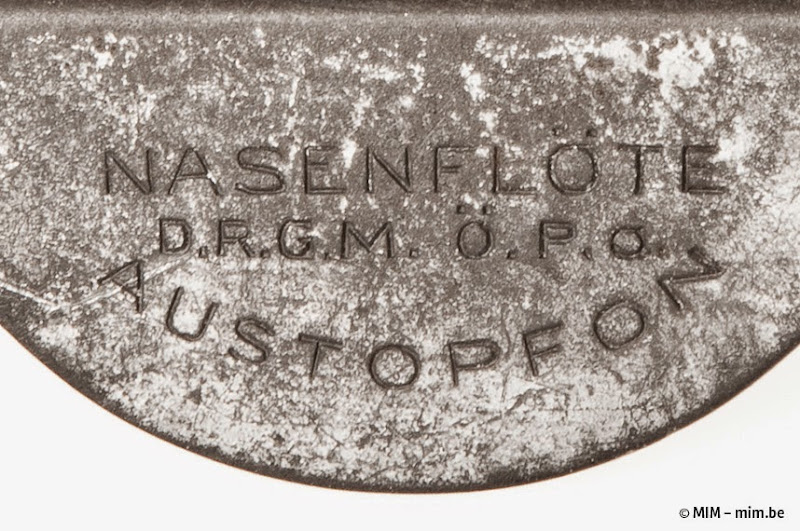 Well, there is absolutely no doubt about the brand name: AUSTOPFON. How was this name formed? Was it made from AU (Austria?), STOP and FON (for Phone, "voice" in Greek)? or AUST and OP (?) and FON? My guess (only an hypothesis) is that it has to be cut like this : AUST (Austria) TOPF (pot, cup) FON (Phon) (kind of "Austrian sounding vessel").

Then, the mysterious stamping Ö.P.O... Generally, the D.R.G.M. (Deutsches Reichsgebrauchsmuster) acronym in use from around 1900 and until 1945, was followed by the number of the patent. Sometimes, also by Gesetzlich Geschützt ( or Ges. Gesch.) meaning "legally protected". But for sure, some items were stamped only with D.R.G.M., with no more precision. But I found absolutely no other appearance of the mysterious Ö.P.O.

In fact, I looked very closely (magnifying the photo) and discovered that the transcription Ö.P.O. (mentioned in the MIM description) is wrong (as was the transcription "Nazenfloot"). Indeed, when you stare at the supposed final "O", you can notice that it is much smaller than the letters Ö and P, and that is very bizarre. More, still looking precisely, you can guess two small excrescence on the right of the letter. My guess is this stamping is not Ö.P.O. but Ö.P.a.!

Would "Ö" stand for Österreich (Austria)? It look like (the initial capital "Ö." generally stands for Austria in German) and in that case, the stamping would certainly be the acronym for Österreichisches Patent angemeldet (Austrian Patent pending), and would explain also why there is no number following "D.R.G.M." More, the initial letter of the word "angemeldet" was (and still is) oftenly stamped in small letter. 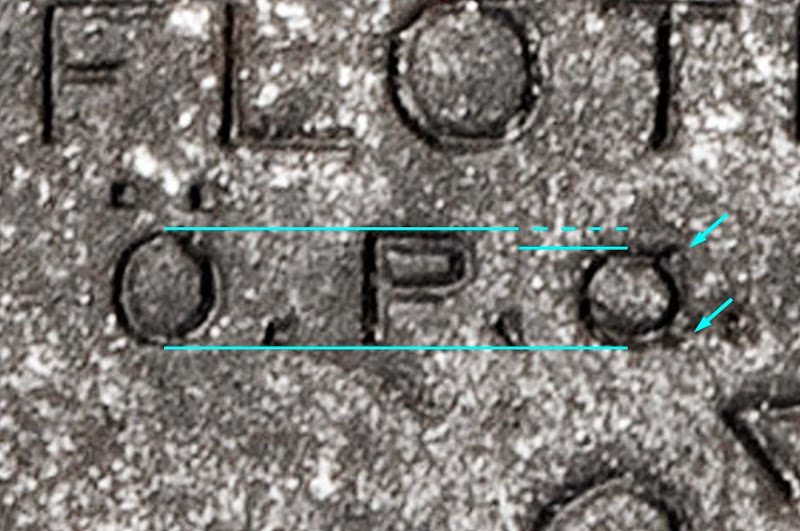 The acronym could also have stand for Österreichisches Patentamt (Austrian Patent Office), as it is used nowadays :

« Houston, we have a problem here! » It is more than likely that the Austopfon was Austrian, but (as already explained in the first part), Austria didn't exist as such before 1918. It was part of the Austro-Hungarian Empire. That is only at the very end of 1918 (November) that Austria became the Republic of German-Austria. So, the Austopfon would date of at least 1919. But Mahillon's catalog states of a German origin, and a date before 1913... but let's go further.

Another great picture shows the Austopfon... with its box! 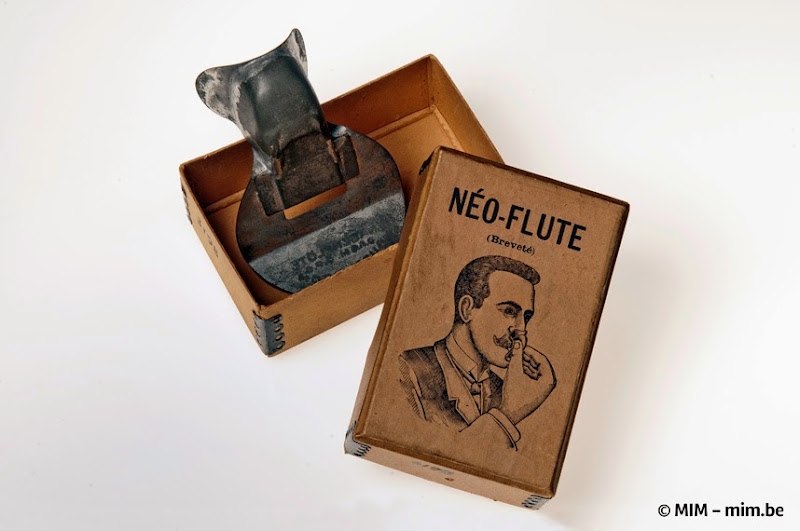 A beautiful cardboard box, with openwork angle irons, and a great drawing on the top. This gentleman with a great moustache has definitely a huge hand, but the drawing is very neat. However, what's funny is the brand name on the box : Néo-Flute, followed by Breveté ("patented" in French). Indeed, inside the lid, there is a user manual that has been stuck, and it is written in French! 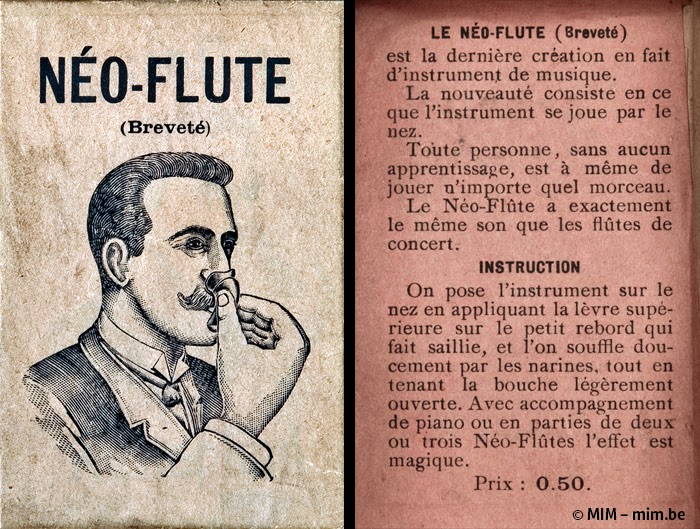 The NEO-FLUTE (Patented)
is the last creation in the musical instruments world.
The novelty consists in that the instrument is played with the nose.
Any person, without any learning, is able to play any song.
The Neo-Flute produces exactly the same sound than the concert flutes.

INSTRUCTIONS
Place the instrument on the nose, whilst applying the superior lip on the small ledge which protrude, and gently blow through the nostrils, keeping the mouth slightly open. With a piano accompaniment or in two or three Neo-Flutes sessions, the effect is magical.


Why the heck is the box printed in French? The probable answer is that the Austopfon has been "rebranded" in order to fit a French speaking market. It is a pity that the price was not followed by the currency unit. Was that 0.50 Belgian Franc, French Franc or Goldmark, Reichmark (the German currency which became the official unit from 1914 to 1918 in Belgium).

However, in 1923, in France, the nickeled version of the Oclariflute was sold 3.60 FF- and in 1924-29 the German Gebrüder Schuster catalog was selling a tin ("Weissblech") Nasenflöte for 2 RM-, and we know that those prices had not evolved a lot. So, even earlier (the Austopfon is necessarily anterior to 1922 since it appears in the Mahillon's catalog), the price of 0.50 is not realistic for a nickeled nose flute, whether the currency was French or German.

So, even taking in account the ratio BF- to FF-, it is not consistent that a rather similar item was sold 7 times cheaper in Belgium than it was in France. So, was it labeled in German currency? In that case, datation would not be neither before 1913, nor after 1918! Tricky, tricky, tricky... This price stays another mystery.

We know that the very first nose flute in Europe dates from 1912, the Wünderflöte. In his Questions of Phonetic Theory, written in 1916, William Perrett mentioned a Humanatone imitation, « in an inferior quality, and sold as the Wunderflöte. » Perrett quotes Dr. Albert Musehold who wrote his Akustik work in 1912 (see this post).
Indeed, we found Mr. Joseph Goldstein, who filed the patent for a Nasenflöte in 1912 (see this post and also this one for the full story). But it was the Wunderflöte, and not the Austopfon.
So, a nose flute was existing in 1912 in Germany. And that is probably what Victor-Charles Mahillon was aware of when he redacted his catalog. Most of the MIM instruments were acquired by donations, collected by Mahillon. What did he do between 1913 (date of the end of the listing according to Mr. Ernest Closson) and 1922 (date of the book publication)? Storing the new donations in a warehouse without opening the boxes, for a future volume VI ? Is it really impossible to think that other donations elements (the Austopfon is part of one of them), regarded as interesting, might have been lately included in the book during those 9 years? I cannot answer, I don't know the facts. I just ask.

Please, note also that there was another nose flute in Belgium, patented in 1912 by François Vandervaeren (Brussels): the Vociphone. We already exposed this instrument and its patent (check here), but not the instrument with its box. And if you look at the picture below, you can notice that the box looks very similar (same openwork angle irons) and, above all, that the Vociphone itself looks identical to the Austopfon: same nose opening, same flaps, same flap extent folded on the back... But the design of the patent is totally different (check here). What does it mean? Well, our Austrian friends might have copied an early shape/patent and and filed it in their own (new) patent office (as many did, stealing patents that were not internationally registered), or the instrument was filed for Austria by its legitimate owner...(another mystery!) Whatever the explanation, the nose flute Mr. Mahillon had in his hands was not the 1912 Belgian nose flute, but (what we think to be) a post-1918 Austrian one. 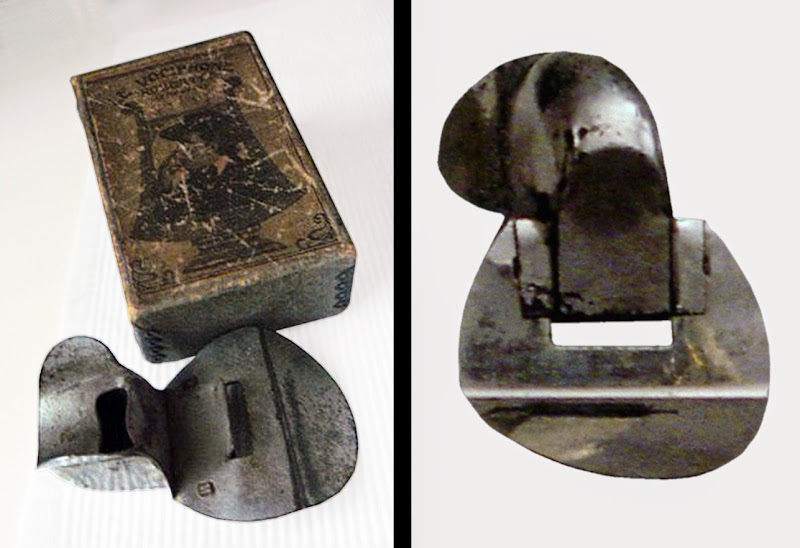 The box is printed in French, meaning that this very Austopfon was not originally bought in Germany (or Austria), but very likely in Belgium (or France). Then, it was donated to the MIM by its owner. How could Mr. Mahillon know (or suppose) it was German since there is no sign of "Germanity" on it, besides the stampings? And the stampings lead us to Austria, not Germany. But in the case Mahillon knew about "the German Nasenflöte dating of 1912", might he have chosen this origin, fitting with the D.R.G.M. stamping (but not the Ö.P.a. one...).

That's why the Austopfon stays a real mystery. My opinion is that it is Austrian and dates of after 1918. It might also habe been the inspiration for the Nasenflöten that were manufactured some miles North, in Brunndöbra and Klingenthal (Germany) in the 1920-25s, and which became the standard German tin nose flutes, sold in any musical instruments catalogs. Note also that we know, by Mr. Heinrich Handler (nose flute maker in Weiz, Austria) that there were already nose flutes in Austria in the 1920s.

But as usual, no evidences, no (definitive) conclusions.

Big thanks to Christian Steinbrecher for his kind help about Austrian knowledge.