Review : A nose flute by the Ise Association

The Japanese Ise Nose Flute Friends Association (Nihon Hanabue Kyokai Ise Tomo no Kai) is a very active organization. It was founded in December 2009 and gathers many members. Lead by their President, Mrs Emiko Sato (who is a writer and notably has created a blog dedicated to hanabue), they have playing sessions, but also travel to meet the other Japanese associations and organize ceremonies with guests. 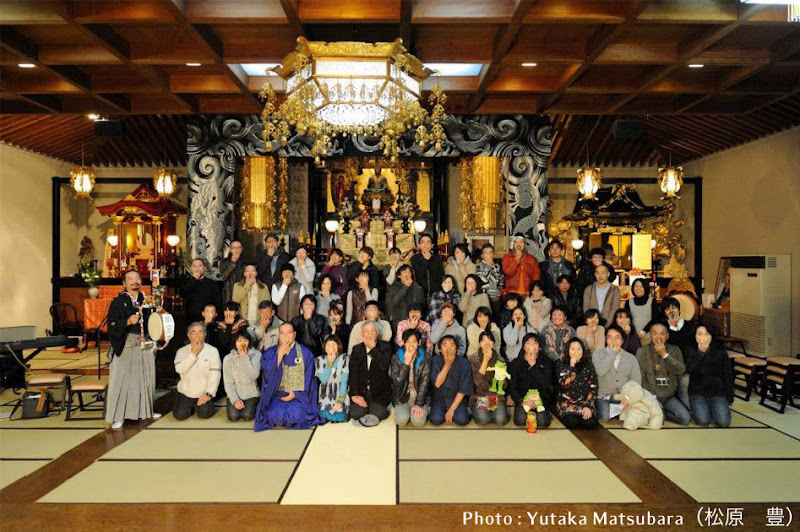 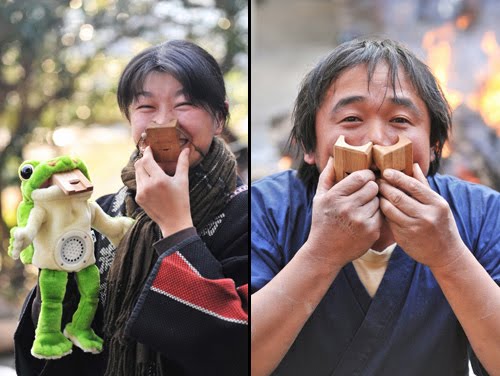 The Ise association vice-president, Mr. Takuma Ikeyama (池山 琢馬) is a carpenter, but also crafts the wooden nose flutes branded and sold by the association.

Thanks to my good friend Sho Hirasawa (ShowNoseFlute on YouTube) who sent one to me, I was able to put the nose on a Fuu nose flute (Fuu, « wind and rain », is the brand of the Ise association nose flute workshop). Let's just say : Yeehah! and thanks a lot to Sho!

First of all : this flute is absolutely beautiful. It's been made in persimmon wood, with raw bark kept on the edges, and with a two-colored piece of wood on the front of the air duct. It has a very original design, very Japanese. It has a comfortable size (5 x 7 cm). 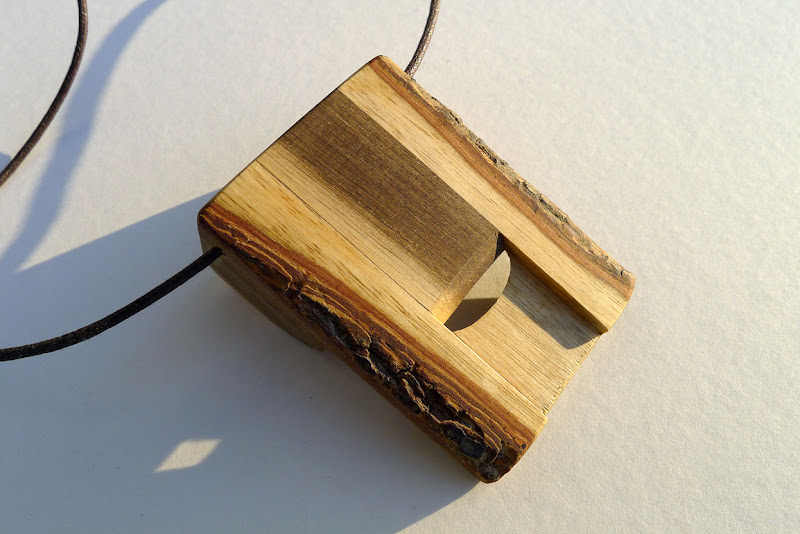 The second thing I noticed is that the Fuu hanabue smells very good. It has been gently oiled for protection, and the mix of wood and oil aromas is very pleasant.

The craftmanship is at a high standard, with clean edges and assembling, the finishing has been done with care, sweetly sanded, and a waxed lace has been added for handfree playing, with a simple yet efficient pair of sliding knots. 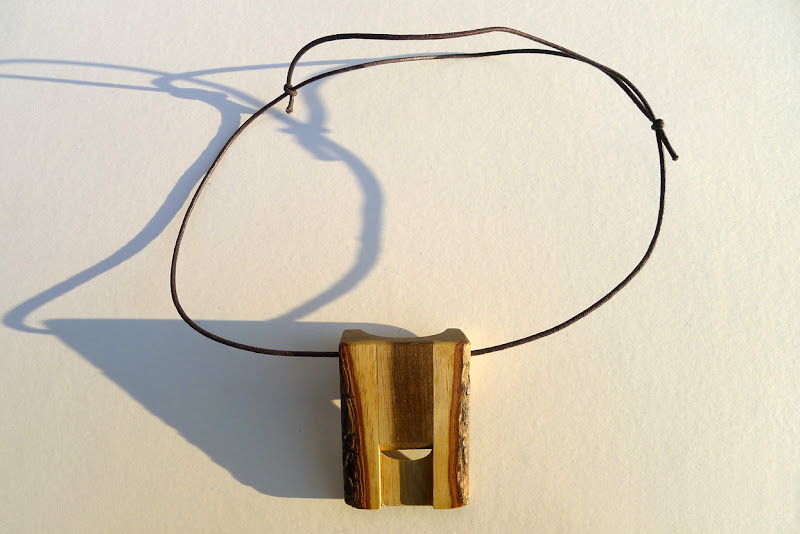 What is amazing on the Ise association hanabue, is the thinness of the air duct : it is less than 1 mm thick and faces a very sharp rounded labium, with a 5 mm gap at its farest. This provides a very powerful and precise loud sound. 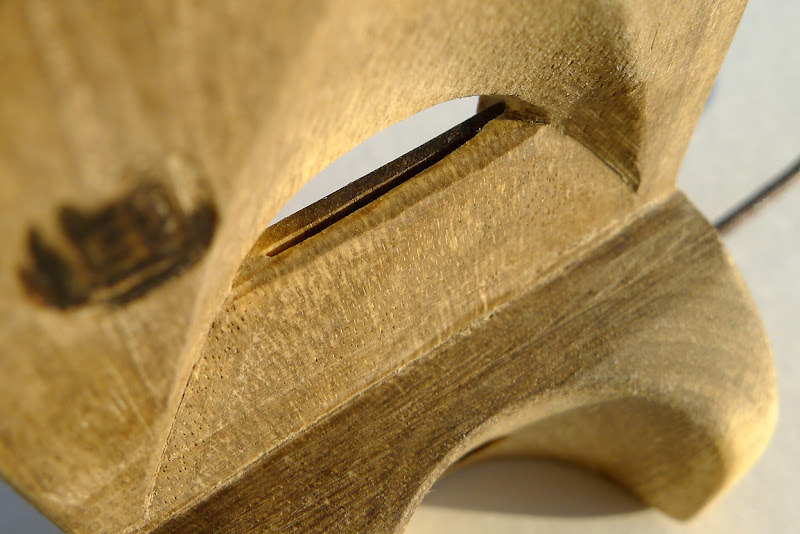 The backside is of « vietnamese » type, with a half-pipe nose rest bored with a round hole. Generally, this arrangement does not fit well the western noses, oftenly ended with cartilage. But on the Fuu nose flute, the half-piped nost rest has been slanted and the problem is nonexistent (with my nose at least). The fact is this flute is very comfortable and very ergonomically designed regarding my physiognomy.
The internal side feature the round seal of the association, stamped with a hot iron. 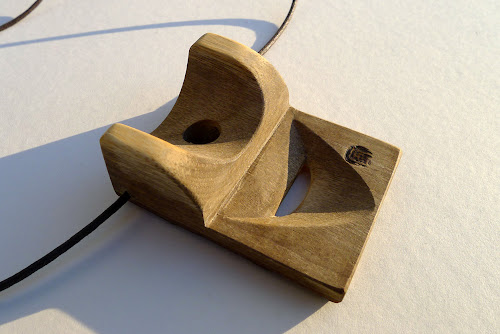 The Fuu nose flute comes along with two papers, one teaching the way to play nose flute in general, and the second about the Ise habanbue in particular, how to take care of it, etc. Thanks a lot to Sho Hirasawa for having taken the time to translate them for us :

On the sound side, I was really amazed. I generally say that a flute can be a good instrument for one player and not for another one, depending on the ergonomy, the size and so... And I think it is true. But in this case, there are also objective points : the way the technical parts are made and designed. The air duct / labium system is really efficient. Then the ergonomics and sizes fit very well my face. This flute is without no doubt my best wooden nose flute, or should I say, the one that fits me at best.

The sound is loud and very precise, and the flute is able to reach from high sharps to low bass, both clear and clean on more or less 3 octaves, depending on your buccal abilities. The Fuu flute offers a very quick answer to solicitations, thanks to the powerful air flow system, allowing very quick playing, and the precision enables easy modulation (vibratos) with the tongue.

Here is a sound sample I made (just added a pinch of reverb) :

And as a bonus, look at the beautifully designed postacard that Sho sent to me, and the nice little drawing on the back of the envelope... Thank you Sho! 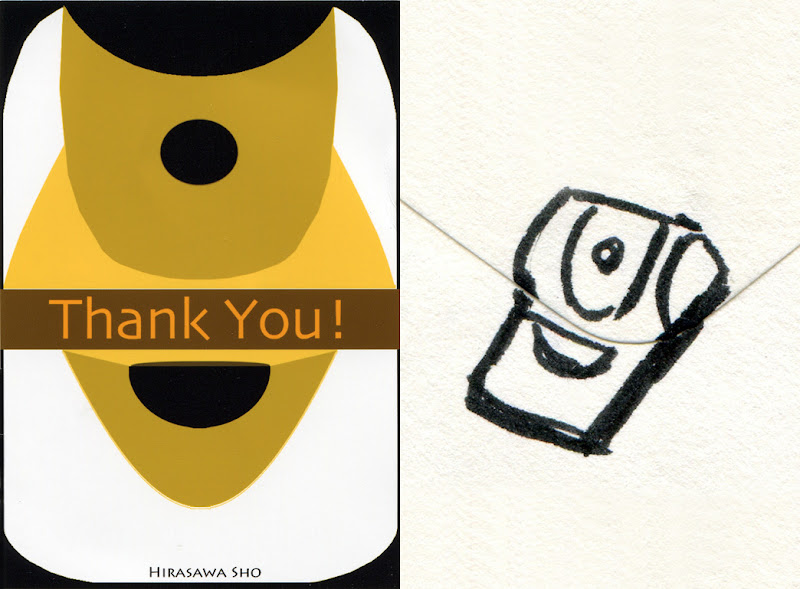