Nose flute as a healing tool

Our beloved little instrument is perfect to play music; it is light and handy, and easy to begin with. It can be used by children as a funny toy, as by masters like Mosurin. It can be useful, as used by the Guaranis to call birds.
But is that really all? All around the world, there are people to laud the nose flute therapeutic abilities. Let's have a quick tour...

« Sing together, touch the instrument, move the body »... this could be the motto of Mr. Guan Wei Chen (管 偉辰 / かんいたつ), CEO of LyriMusica (株式会社リリムジカ), a Japanese company founded by Mrs. Moe Shibata in 2008 which provides care and assistance to old and dement people. It is specialized in music therapy, notably with the help of ocarinas and nose flutes, but also with many other instruments. Its staff has implemented more than 600 music therapy sessions since March 2009.
(Note that LyriMusica is recruiting a partner music therapist)

In the same kind of nose flute activities, and besides her professional viola playing with orchesters, musicians or choirs, Birdy K., well known on YouTube as « The Nosy Diva », works in Germany as a free lance musician in senior citizen's and nursing homes, providing music cares.

« In my musical work with old, often demented people, I use the noseflute quite regularly, with good success. Laughing, amazement, just the typical reactions you always get with that funny instrument. Some people are irritated and do not like it, but that is rather normal. Concerning noseflute playing  with handicapped people - I do not have very much experience with that yet. I worked with a paraphlegic lady who enjoyed playing very much and would not have been able to play any other instrument since her hands are too weak.
I will soon be doing a a noseflute workshop at an integrative sports event with handicapped kids, I am looking forward to that. »

Here is a recording from a little private workshop given by the Nosy Diva at the home of one participant. The boy had just learned to play the noseflute some minutes ago and the recordings were done quite spontaneously :

In the USA, the nose flute is oftenly used as a tool for improving children's breath or speech abilities.

TalkTools is a company specialized in « oral placement therapy for speech clarity and feeding ». In its product catalog, which includes Humanatones, you can read : 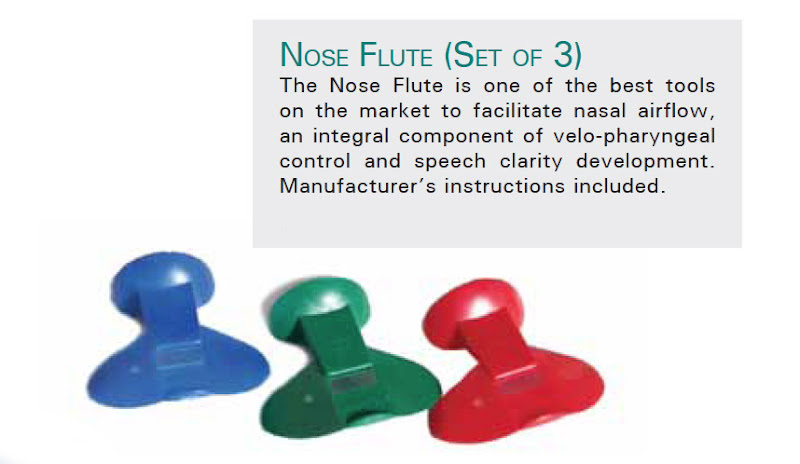 « The nose flute is used to establish and increase volitional airflow through the nasal passages. This horn helps the child practice nasal exhalation to reduce mouth breathing. »

On a psychological side, the nose flute is also used as a tool. In Canada, David Gouthro, a consultant in management, implements nose flutes as a life metaphor, and a self-development instrument [see this post]

The famous YouTube Dutch nose flutist Job The Pas is a pedopsychologist. His company, PSYCHOS, is specialized in helping the children « who are experiencing social conduct problems at school and at home, often related to handicaps (weak intelligence, dyslexia, mental disturbances), peer problems, immigration problems and/or traumas. »

« When I hear at his way of talking, talking in high & low tones, I try always his level of singing. When he can sing a simple song good in tone, I try to teach him some tones on the noseflute. When he shows one tone he gets the flute. »