Felice Pantone is a north-Italian « poly-musician » who plays the nose flute. He is « Ugo » in the duet Ugo e Casimiro, formed with his friend Alberto Bertolino (« Casimiro »), barrel organ and percussion player. But Felice is also an ingenious inventor, and have dedicated some of his creations to our noble instrument, notably the ReggiFlauto we reviewed previously.

Felice Pantone has gently accepted to answer our questions.
For Italian readers, the original version is downloadable here. 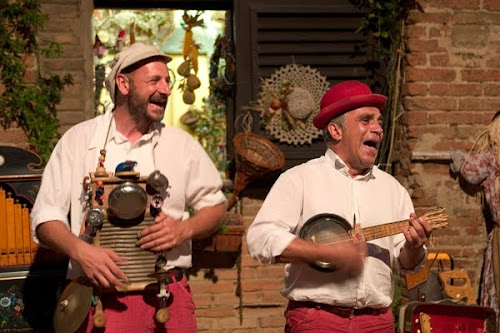 - Noseflute.org : Ugo & Casimiro, you are musicians. Who are you ? Where are you from ? Have you always been playing as a duet ? How long have you been playing together ?
- Felice Pantone, aka. Ugo : I am Piedmontese with southern roots, and live in Tuscany. I like to call myself a Cantastorie (Storysinger). I am 54 and have been a street musician for 28 years. I live from what I write and I have a lot of fun. By need and vocation, I've always been frequenting the music world. What at first was a hobby became a job, that I have shared for many years with my partner and wife Celina, dedicating mainly to children theater, staging events where live music has always been the star of our stories dedicated to the world of children. If you visit the site ilgrilloweb.it, you will better understand what we do.

And since it is nice to have other experiences, knowing Alberto Bertolino, a barrel organ player with a repertoire that I liked, I was able to realize a project that I wanted to try : Barrel Organ with musical saw; from then on have been a succession of stimuli that were traveling with our experience and capabilities, and thus giving birth to Ugo & Casimiro, street musicians.

Today, our repertoire is very varied and ranges from songs written by me and performed with instruments that I preferentially build by myself, the Ranophone, the tuba, the washboard, the ukulele and the unavoidable nose flute, pride and joy of my nostrils! Or well-known songs of more serious music, Classical, French Musette, Pop, and songs by Italian songwriters played with the barrel organ, accompanied or solo, with the vocals and various instruments and the musical saw.

The union has not been easy, but since 2004, Ugo & Casimiro have had the opportunity to perform in many festivals of street theater in Italy and abroad.
What the public finds rejoicing about our figures, even today we do not know it ourselves. A tall one and a short one, an old and a young, a thin and a fat, a crafty and a stupid, boh? The thing is that the public has fun with us, and we too. We do what we like... following imaginary rules which change here and then. It is life, and we like it so !


- How do you share your roles? What instruments do you play?
- "Roles are shared according to the technical abilities" is a law of the show, but oftenly, we try to turn around it, and more unpredicable things and fun happen then; We try not to take ourselves too seriously and not just when we do it our way. 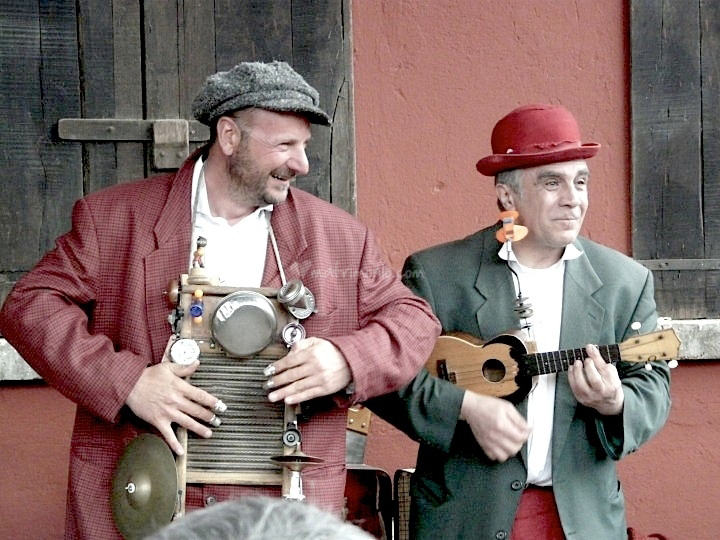 - You play in the streets: how the public react to the nose flute? Is the nose flute an instrument famous in Italy? How and when did you discover this little instrument ?
- As I learned to play the musical saw by myself, I came across a book found in a specialized shop and between the various instruments described in the book, I came across the description of this instrument that, since I do not speak English, puzzled me by the drawing describing it, but something told me it could be interesting. I looked for one with the help of a German friend and I finally got hold of a copy : it was love at first breath, it seemed that we were old friends. Since then for me, it was like a mission, the goal was and remains, to make known an instrument for adults and children, professional musicians and beginners. Curious fact is that, in Italy, nobody knew him, including music shops that prefer to sell the kazoo and not this wonder of wonders.
I could go on listing the many qualities of the instrument, but the thing that surprised me most is that it is actually an instinctive instrument and just needs to be approached as lightly as for a game. Elite professionals, academic musicians have found themselves in difficulty, and children amazed me with the ease with which they have learned and performed the first sequences of notes

During our shows we offer this tool and I must say that the public remains fascinated; beautiful are the reactions of joy that occur during the test of the instrument after the purchase, getting people curious because this instrument is not known in Italy. The public tries and realizes its potential, then get excited about it.
In italy, what did not allow the diffusion of this instrument is the word « nose ». I happened to participate in television programs several times, where I proposed this instrument for my performance and I am sure that I was the first one, because the surprise and embarrassment were so huge to have to pronounce the words « nose flute », as if someone's nose would procure embarassment.
I do not understand the reason, they defined it in dozens of ways to find the right way to define the instrument I wanted to present. 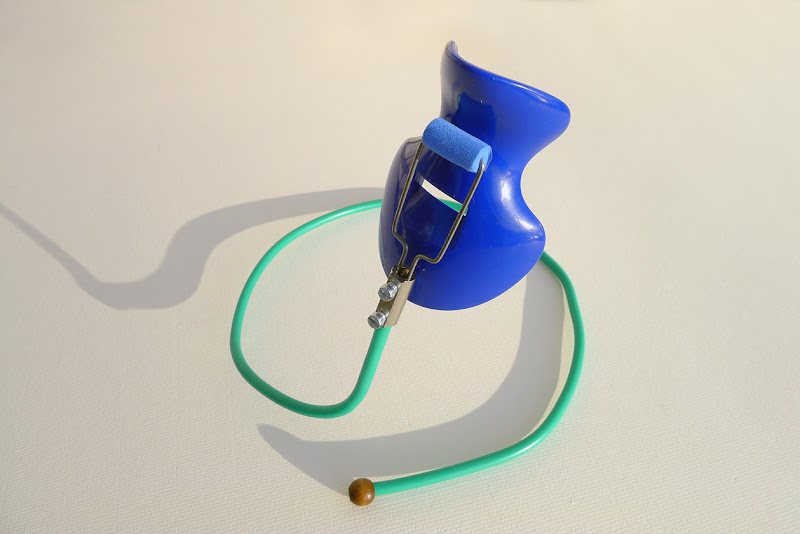 - Ugo, you're also a creator and you made some inventions for the nose flute! Please can you tell us what the Reggi-Flauto is? How and where to buy one?
-  I learned the dynamics to play the nose flute in a mix with the ukulele, the guitar and the other percussion instruments that we use in our songs, but having only two hands I found it difficult to do everything at once alone, and with the Reggi-Flauto I found the solution to the problem. The Reggi-Flauto allows you to use another instrument and to sing because it holds the flute before the mouth, but at the same time it allows you to sing. Before I use to play the flute by holding it to the mouth with a rubber band, but it certainly was not possible to sing or speak.
For those who have the need for a convenient flute-clip that is easily adaptable to any large or small person, has passed all the tests in terms of safety, the Reggi-Flauto may be purchased by writing to felipan(at)tiscali.it or info(at)musicaistintiva.it . It costs a few euros and provides you the solution to your musical problems.

- You also invented a cardboard nose flute. The design is top secret for now, but could you tell us some about it? When will it be available?
- Every now and then, one discovers that the world is round, and with this latest work, I seem to be back at the beginning of my adventures : for me, all started with a model shown in paper that drove me curious about, and then...
Having been very fond of this instrument for many applications that it can have both in music and educational fields, and medical and health care (post surgery rehabilitation of the nasal septum, or speech therapy), and being in relation with the school world,I designed a template ready for building a paper nose flute in a few cuts, which works perfectly and produces a pleasant sound, maybe even softer than the plastic models. For the graphic design, I have been helped by those who know much better than me how to do this work.
The result is a object that can be offered as an educational tool or as a low-cost advertising support, with the ability to customize the printed card in many imaginative possible ways. If you think it could be useful for your musical activities, contact me !

- Ugo & Casimiro, what are your coming projects and plans?
- This past spring with a few friends in the area near my house, we have started testing and produced some performances of the first "little nose flute orchestra". I was so great that Casimir and I, during our shows, we were used to say to the public that « with the nose flute it is possible to make duos, trios or orchestras, successfully with young boys and girls ». At the end, I managed to involve some friends, and as you will see on the video made at home, the testing continued, between a good glass of wine and a salami to slice.

"Ugo & Casimiro", in this February 2012 period, are trying to stay warm near the fireplace, to collect their thoughts and complete the recording of the CD « Canzoni da Passeggio », with many songs that can now be heard piece by piece on the various sites where casual youtubers have wanted to immotalize them.
Meanwhile, we are preparing and harvesting dates for the summer tour, we will be committed when temperatures will allow us to trample on the most beautiful squares of Italy and Europe, and on the most beautiful events dedicated to street theater.


--- Some links : - Review of the Reggi-Flauto - Some other videos here, here, here, here and here - The most recent video by Ugo & Casimiro - Il Grillo Web - The Casimiro/Alberto Bertolino's Youtube channel - Spicchio di Luna : an mp3 song to buy on Amazon And to contact Ugo & Casimiro : felipan[at]tiscali.it or info[at]musicaistintiva.it with replacing [at] by @, for sure.