Much more about William Carter - Part I

One of the most interesting findings made in The Orleans Repbublican was this little news (1907-04-03):

William Carter had a brother! I wasn't aware of that, since the first archives I found were about William and his mother Catlaine/Catherine only, no other Carter family member. A brother, so what ? The more I found about James, the more explanations arose regarding William choices and feats. That's why it is interesting to look a bit deeper in James' career.

James H. Carter was born around 1835 in Ireland. Did he emigrate with the same "famine ship" as his mother and brother ? It is difficult to know. I found no record that could fit for 1851 (immigration year of Catlaine and William), but one may exist, but an archive, prior to 1851, that is consistent with James' birth around 1935 (but once again, there may be other ones that I didn't find).

This list of passengers of the St Lawrence dates of 1848, and there is one James carter who is 14 years old, comes from Ireland and is farmer. He embarked in Liverpool and declared intending to go to Canada.

If this is the right record, James have left Ireland first, maybe as a "scout" for his relatives.

Then I found a 1850 census sheet which records a James Carter aged of 15, and occupied as a servant in Mount Pleasant (NY). This is the only record consistent with a birth around 1935 (but I found a 25 y.o. ostler in Lockport (NY))

1860 is the year from which we can begin to state ascertained facts. In 1860, James, but also his mother and his brother all live in Lockport, NY. They just don't live in the same house/district, and this explains why I didn't spot James existence before. Indeed, James, 24, has already got married with Mary (from Ireland too) and is the father of the little Kate, born in 1859 in the New York state.

While Catlaine is washwoman, James is surveyed as a... tinsmith! We know that William settled in Albion (20 mi. further east) around 1872 – at the age of ±26 – and it is very likely that before, William became apprentice and learned the craft besides his brother.

The first pieces of archive I found about James are those little newspaper clips of 1860 and 1861, which are interesting because they mention an address:

1857 Lockport map:
So, James is a "small" tinsmith working on his own, but he did all what he could to get bigger and integrate and participate the city life. In 1862, he produces extension tin cups for the irish soldiers of Capt. Maroney's company:

In 1867, it seems that James Carter has acquired some acknowledgement and credibility. He is nominated as Sealer of Weights and Measures for the city. 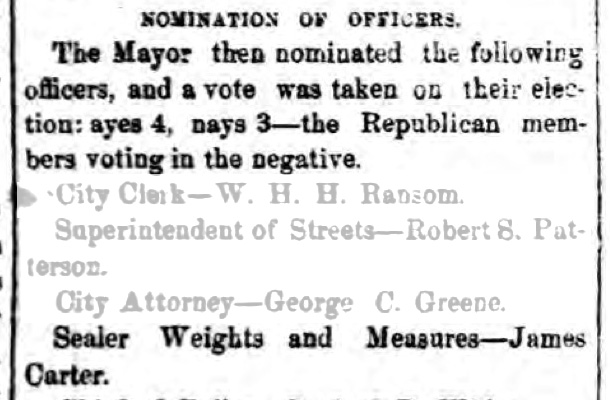 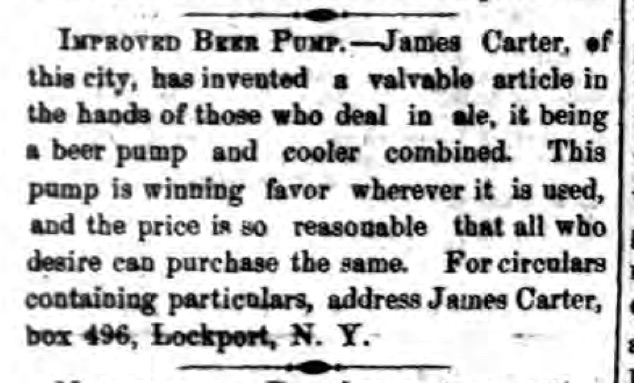 In September, he becomes an agent for the Ne Plus Ultra portable furnace. 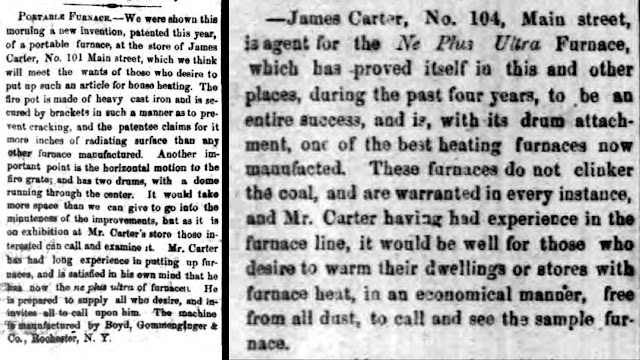 We learn that James has moved to 101 Main street (the "104" in the second paper is probably a typo), and will keep his store at this address until (at least) 1885. Indeed, James Carter is beginning to grow money. Around 1870, he buys a house at 56 Locust Street, a charming and wealthy residential district of Lockport. 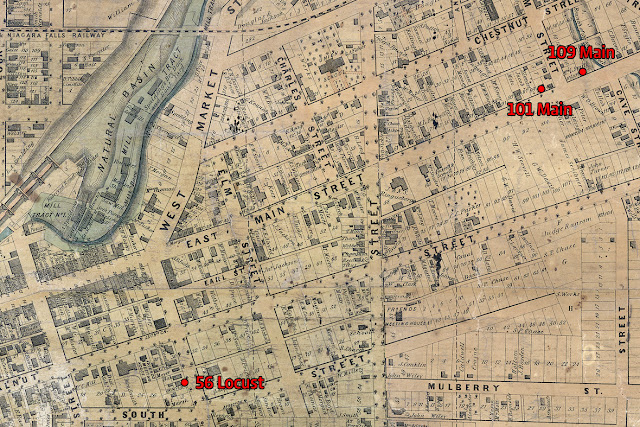 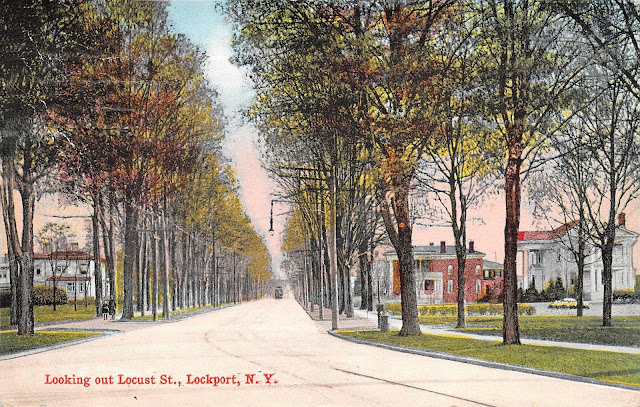 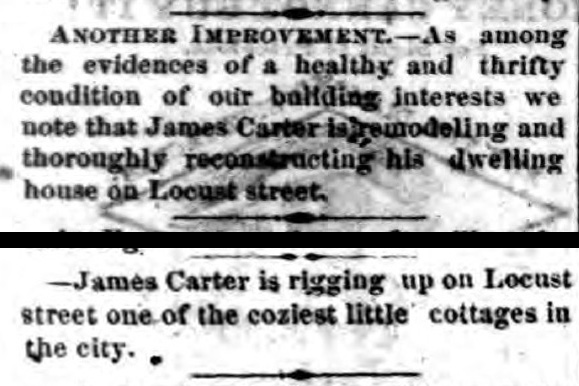 James Carter and his wife lived all the rest of their lives in this house. In a 1908 map (after their death), the name "J. Carter" is still mentioned on the 56 Locust plot. 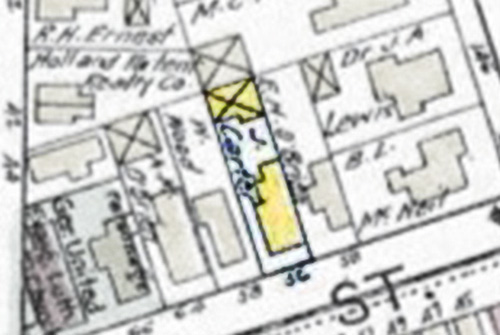 1871 is the period of time when William left Lockport for Albion. James was following his ascension, became member of clubs. He was a fine rifle and won contests, and a fisher — he was member of the Angler's Club – who repopulated creeks with trouts and bass... while Mrs Carter was active in the Lockport branch of the Needlework Guild.

James Carter probably understood that he would really make money with his inventions. But for that, he had to file patents.

There were recurrent advertisement by agencies helping to file a patent, and maybe it is through this way that James began. 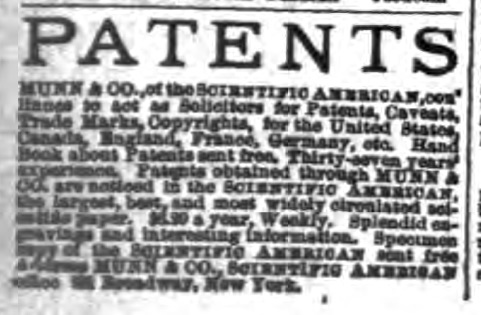 
One of the first patents, the Combined filter and cooler (1884) was a great success, that really helped growing James' social and econimical position and status. Carter was making good business, but also began to be regarded as a serious reference in filtering and purifying water.

A small selection of the many articles mentioning Carter's filter/cooler 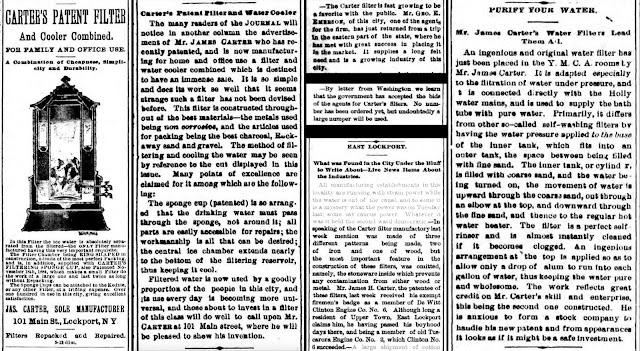 But it's mainly the 1890 Pressure filter patent that definitely turned James Carter to a successful business man and an expert in water filtering. In 1892, James sold this patent to the Field Force Pump Co., probably for a nice amount of money... In 1897, Frank Farnell bought the entire business of the Carter Filter Co.

4. - Wealthy life of a retired businessman

In 1894, James retired from business, and left Lockport for a leisure travel in London (did he visit Ieland too?). He crossed the sea on the magnificent S.S. Paris (formely named "City of Paris"). During the crossing and then, from London, he sent some letters that were published in the Daily Lockport Journal, for our greatest pleasure: 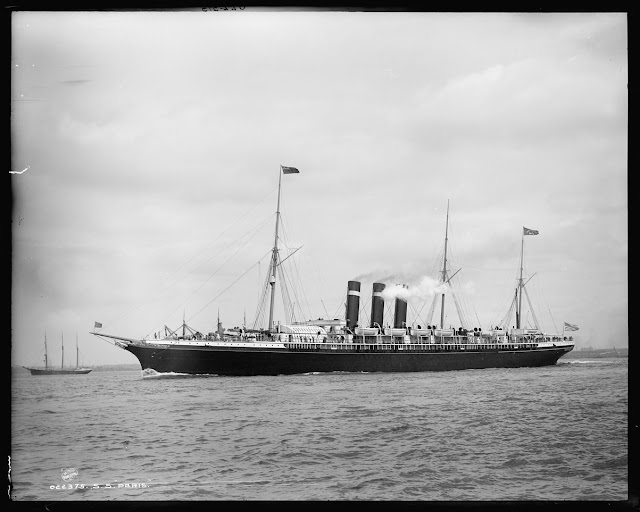 During the end of the 1890's, the Carter's filters are growing and growing in sales, as James' expertise in water solutions, as member of the Water Board of the city. He entered a long city discussion about filtering the water from the Erie canal in order to feed the city in clean water (I will not publish those numerous and long articles here, but if someone is interested, please drop me a mail).

Now James is retired from direct business, but is the owner of different stores downtown (85 Main and 36 Market st.). He is not a tinsmith anymore, like in 1860 census sheet, nor a Hardware manufacturer, as it was mentioned in the 1870 and 1880 ones... In the 1900 census, his profession is now inventor.

It is at the occasion of a rifle shooting contest that he won, that the Buffalo Evening News published a beautiful portrait of « Uncle Jim », with an article retracing his numerous successes in shooting contests. 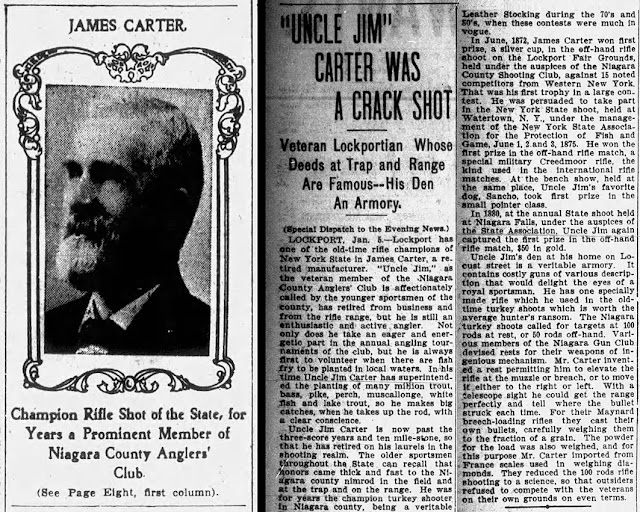 And on 23rd of March, 1907, Uncle Jim followed Mary in heavens. James died from a typhoid fever, in his house of Locust St. 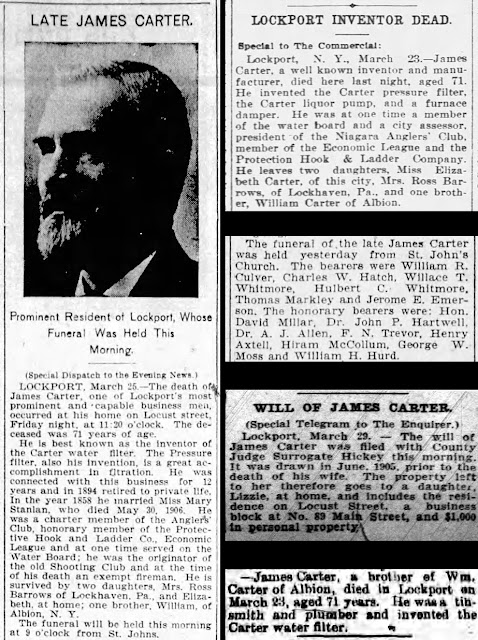 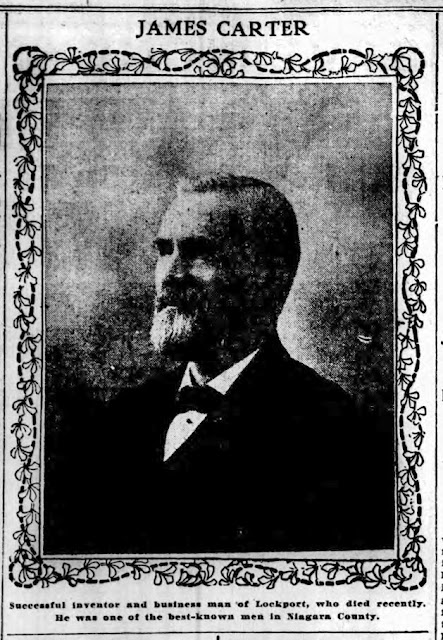 
It is a bit strange to publish here a long biography of a man that had *nothing* to do with the nose flute. However, as the big brother of William Carter, this article is supposed to put in the light some facts that are directly linked – according to our own opinion – to William's invention.

First, James was probably the "scout immigrant" for the Carter family in the USA. He settled in Lockport and stayed there for the rest of his life. He became a tinsmith and we can state without any doubt that he taught the craft to William. Then, he was an inventor, patented several of his inventions, and became rich and « best-known » with them. Would it be unreasonable to think that William tried to follow the success of his brother, and that he was looking for creating his own invention, patenting it and selling the patent in order to rise from his low condition ?

I personally think that James was a model for his young brother William, and that many of William's feats can be understood through James' ones.