Master Katada also sent me three other nose flutes, very peculiar models of his invention: one Direct Nose Flute (ダイレクト鼻笛), and a couple of the Kunimaru Nose Flute (くにまるの鼻笛). All are made in bamboo.

The Direct Hanafue is one of the many ancestors of the Kunimaru (see below for history), and was an intermediate completion for a project initiated much earlier. I guess this version dates of 2014. 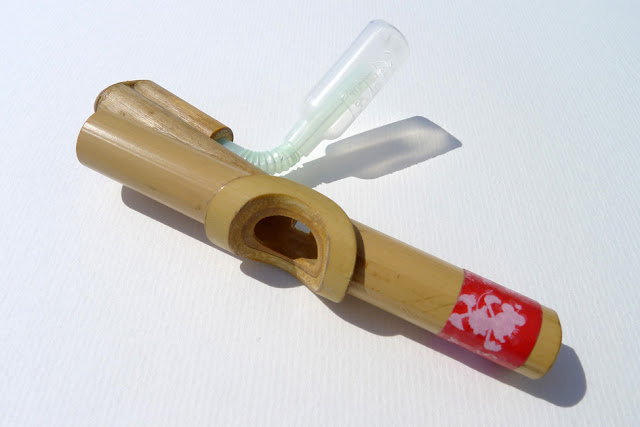 This instrument is stunning, totally aside the generic shape of known nose flutes. It is a kind of a skeleton of a nose flute, having (almost) all the unnecessary material removed. The air way is piece of straw and the air collector is a small plastic bottle (the kind you get filled with soy sauce with a couple of sushis) that the player inserts in one of his nostrils! When Kunio Katada imagined this system, he wrote on his blog « 難儀！！挿入型鼻笛 » («Affliction!! Insertion type nose flute!»).

As you can see on the pictures, the flute is made of a bamboo tube with a mouth hole, ridged by a contoured flat ring — a lip plate – as done on the western concert flutes. In fact, the rod has been cut longitudinally, and a flat piece of bamboo, where the fipple is cut, has been glued to close the tube back up. The air trickle is projected on the fipple sideways! Indeed, the fipple itself has been cut horizontally, and in the inside of the bamboo rod. The blown air is driven from the nostril insert to through a pair of coupled tubes, the longest one becoming sharper where it reaches the body, accelerating the blown air towards the labium.

Both ends of the bamboo rod are open, and if you clog them with your fingers, you get a lower note (± 1 tone, depending on the pitch).

Ki Kanban sent the Direct Nose Flute with some accessoires: spare straws, a spare "soy bottle", and another nostril plug, more complex (less pure in its shape), but conical, and thus more ergonomic. But I must say that the regular "soy bottle" insert doesn't hurt at all. About having to insert the collector in your nose, Master Katada wrote on his blog: « However, to play this whistle in public, because of the embarrassment of the plug in the nose, we need courage to a great extent! ». We are very courageous. Well, no, but we are a western punk. 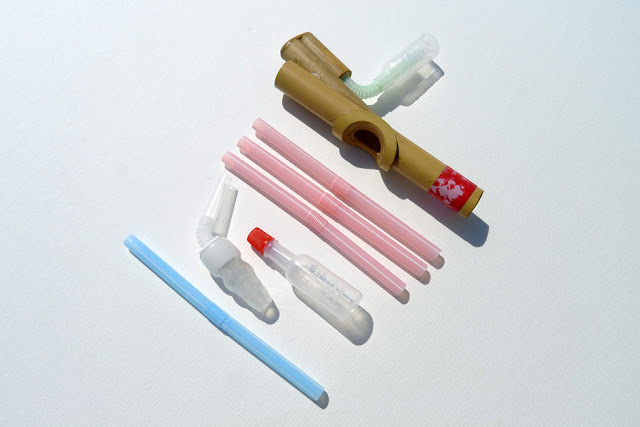 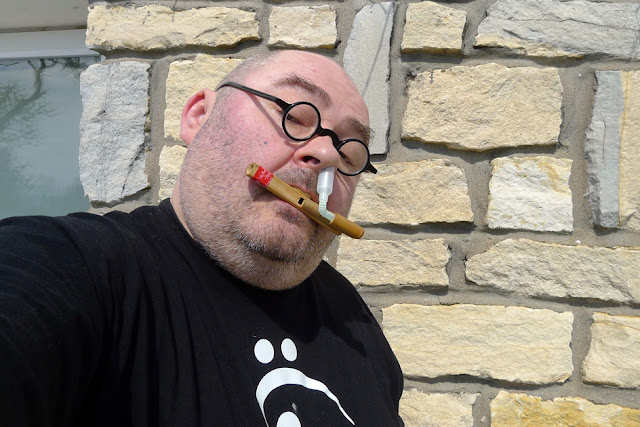 We made a little recording to show you this nose flute is more than playable!:

Now, my friends, we're going to touch the sublime. The Kunimaru Nose Flute (くにまるの鼻笛) is not only brilliant and beautiful, but it is also a great nose flute. It is the achievement of a process Master Katada began in December 2008. The first « Kunimaru no habanue » dates of November 2015, but the final model (narrow plate model) of January 2016. More than seven years to reach the perfection. 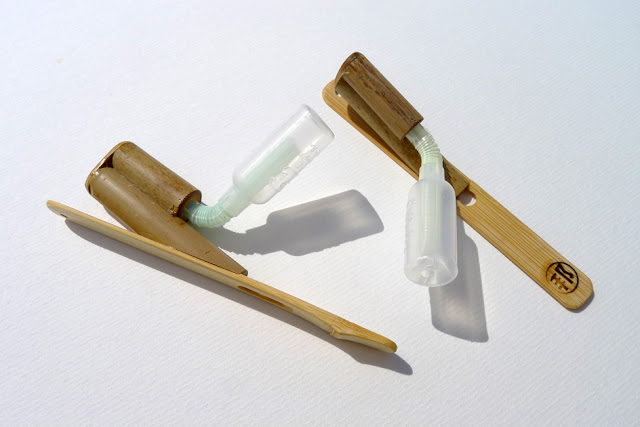 くにまるの鼻笛 means Nose Flute of Kunimaru. Whether Kunimaru was a famous Japanese engraver, we are prone to think (thanks to my friend Fritz for his help!) that here, Kunimaru (くにまる or 邦 with a circle [maru]) means the country, better, homeland, the Japan. くにまるの鼻笛 is the Homeland Nose Flute. But one should also notice that the sign 邦 (kuni) with a O (circle) is a rebus with « Kuni - O », which obviously is read « Kunio », like Mr. Katada's first name.

Kunio Katada sent me two of these beautiful babies: one has the main plate totally flat, while the other shows a bamboo node at one end, marking like a place where to grab the instrument. Besides that, no difference between the flutes.
The Kunimaru no hanabue is built on the same principle as the Direct Nose Flute, but reduced to the extreme. Here, no bamboo rod with a lip plate: just a fine and narrow flat piece, barely broader than an ice cream stick. Was more simplicity possible?

The main plate is 11cm (4"⅓) long and 1.3cm (0"½) broad. It is super thin (±1mm), but is doubled from where the fipple is carved and to this end. On one end, a small hole to pass a cord, and on the other, the beautiful Kunimaru branding iron mark. This brand appeared far earlier than 2016, since Master Katada used it already in 2011, on a wooden nose flute.

The rest of the Kunimaru nose flute is the same than on its predecessor the Direct nose flute: a little soy sauce bottle as an breath collector, an elbow straw, and the coupled double bamboo rod to drive the air flow.

The Kunimaru nose flute is really a stunning instrument. It is a stripped bare nose flute, simple yet efficient. It is super light (5.5g!). But most of all, it is a real zen beauty. 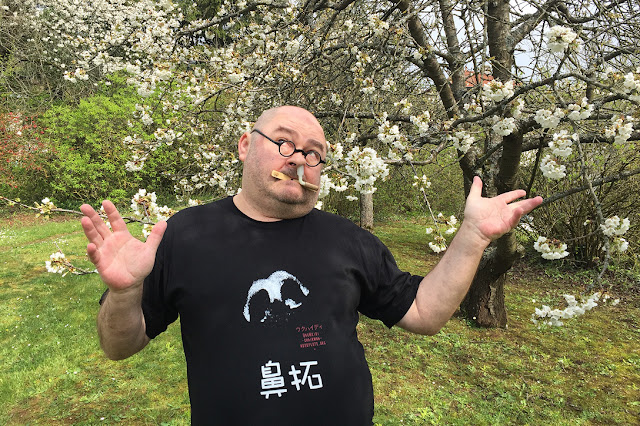 
5 - Genesis of the Kunimaru nose flute

As written above, the Kunimaru hanabue was completed last January, but the idea came to Master Katada much earlier. We went through the numerous pages of his blog « Ki_Kanban » in order to paint the chronology of this project.

All the pictures below are copyrighted. All rights reserved to Mr. Kunio Katada.

All started with a double nose flute Mr. Katada built, with a double air entrance (nostril inserts). This appeared not convincing, and Kunio-san made another prototype with straws, and superposed fipples. Finally, the craftsman decided to separate the double flute and work on one fipple driven by a straw. he called it the Nightingale whistle.

Two months later, Kunio-san followed on developing his idea of a single fipple fed by a straw, asking to himself « これも鼻笛？？ » (« Is this also nose flute??»). Rather immediately, having been hurt by the bamboo inserts, Mr. Katada found the soy sauce bottle solution. He produced then a series of the Nightingale, then discovered he could also use ear buds. In the same series of experiments, he tried a bigger shield, round vs. square embouchures, other material than bamboo, but finally came back to bamboo rods and soy sauce bottles. The last batch dates of June 2009.

Silence on the project during almost two years, then, in February 2011, Master Katada wrote in his blog « 難儀！！挿入型鼻笛 » (« Affliction!! Insertion type nose flute »). The picture shows that Kunio-san was working on the lip plate. 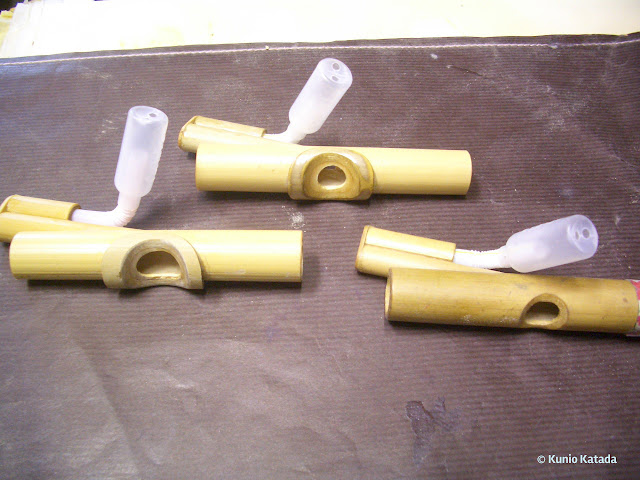 More than three years again before the project starts again. This time, it seems that different rod sizes and fipple shapes were tested.

One and a half more year, and finally the work was put back on the bench. New tests, new shapes, new sizes, lip plate size tests... and finally a nice bunch of what is called now the Direct Nose Flute

And finally, once month later, the Kunimaru nose flute appeared with its ironed branding. The blog still calls it « Direct Bamboo Nose Flute », but the logo is there. This shape is not totally the final one: if you look carefully, the main bamboo plane is broader than the definitive one.
In December, Master Katada created a plastic version.

Last January, Kunio-san completed the Kunimaru no Hanabue, with a narrowest possible stick, and reaching a pure zen elegance. A new model of soy sauce bottle — The first batch of the finalized Kunimaru was produced, packed, sold and sent!


We want to thank a lot Mr. Katada for his generosity. We love the Kunimaru Nose Flute, and are very glad to be a fortunate owner of some of these early samples. Noseflute.org wishes a great destiny to this beautiful instrument.