Was Harpo Marx a Noseflutist?

Our friend Harm Linsen sent a video link, commenting « Listen to it and see if you can confirm my suspicion ». The question is obviously, is there any nose flute played in Groucho's great success Lydia the Tattoed Lady ?
The song was first performed in the 1939 movie At the Circus, by Edward Buzzell and with the Marx Brothers. Lydia, the Tattoed Lady then became Groucho's signature song. The original movie sequence features two whistled parts. 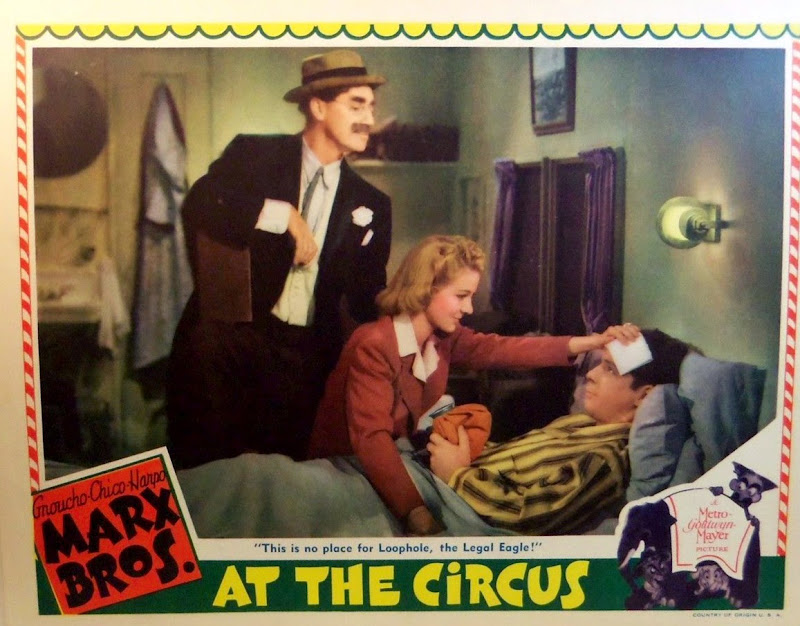 In the video, the first whistled part starts at 1'14 and lasts 4 seconds. There, you can see Harpo whistling, on the right of the image. But despite a kind of optical illusion on some images which would (falsely) reveal the use of a nose flute, Harpo is just whistling with both his left pinkie and index, under the cover of his right hand. 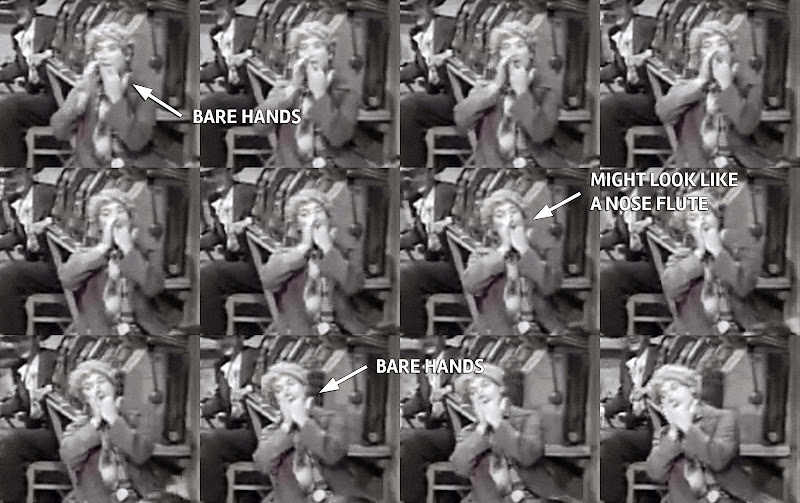 For sure, the movie is "played back" on a pre-recorded soundtrack, and seeing no nose flute on the images doesn't mean none was used. But we also know how Harpo Marx was clever in whistling with his fingers (check this great video with Spike Jones). So, the excerpt is very short and it is difficult to have a definitive opininion. So I isolated the 4 seconds, "normalized" them, and made a sequence of it 4 times repeated. The whistling is a bit out of tune (positive fact for a nose flute opinion!!:) and could be a nose flute... or not. Judge by yourself:

The second whistled part stands at 2'47 and lasts 6 seconds. During this lapse, Harpo is jumping and dancing, not whistling. The whistling soundtrack is much more elaborated. First, we can hear a barrel organ. And "under" its music, there are differents "whistlings". I am sure to recognize a slide-whistle. It is the very first whistling, going up in tone, with its very peculiar sound, like plastic plumbery. Then, I'm also totally sure to listen to a musical saw, which is the one that provides the modulations (tremolo). But there is a third whistling sound. Was it produced by Harpo with his fingers, was it a recorder, or was it a nose flute? I sincerely am not able to discern enough to tell. But if one of you knows whether Harpo was a nose flute player, please please tell us!

Here is the excerpt, 4 times looped:

And here is the same sample, slowed down at 33% speed: