Mr. David Lapp is a Physics teacher who is the author of many Physics and Education publications (see here). 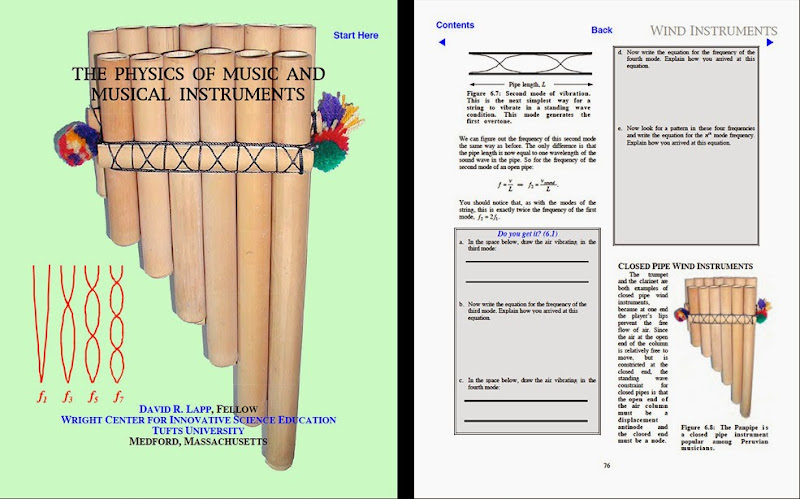 The Physics of Music and Musical Instruments is a 119 pages PDF book (download it here) with 7 chapters, among them one is dedicated to Aerophones (wind instruments). Those 24 pages are obviouly mostly devoted to the study of vibrations, air flow, sound waves, differences between open and closed pipes, providing the right equations for each type of instrument. The chapters include exercises and are ended by one or more "Investigation" sections. One of those, in the Aerophone chapter, is devoted to the nose flute.

The Nose Flute Investigation part begins with a presentation of our beloved instrument (represented here by a Trophy Humanatone specimen), and exposes it as being incomplete — Actually it is only part of a musical instrument — immediately followed by a a reassuring completion — the remainder being the mouth cavity of the player. No offence then, and contrarywise, it is a very clever point of view. Indeed, Mr. Lapp seems to be a nose flute friend: The result is a clear, pleasing, flute-like tone

The nose flute is comparable to a closed pipe, with a variable pitch, exactly like a slide whistle, which stopper would be your tongue. At the very end of the book, there is a Physics of Music Resource Vendors section, and the very last paragraph is this text:

Well, I'm not going to paraphrase what Mr. Lapp explains in his article, but just sum it up:

- Vibrations in a nose flute act as in a closed pipe, like a slide whistle
- The frequency provided by closed pipes is the result of the equation F = v/4L
(where v is the speed of sound and L the vibrating length)


The two next pages are a form of 6 questions-exercises. The two last are interesting, notably the #5:

If you played the nose flute, what is the lowest theoretical note on the Equal Tempered Scale that you personally would be able to get? (You will need to make a measurement to answer this question.)

Well, using the F = v/4L equation, with (v = 343 m/s for the speed of sound) and measuring my mouth depth drove me to wrong results... Indeed, I previously checked with a frequency meter the lowest and sharpest notes I can produce with a Bocarina™ nose flute.

If someone can explain me this result...
Is F=v/4L really the right model to apply to a nose flute ?
Should it not be a Helmholtz resonator (much more tricky, by the way)?

Email ThisBlogThis!Share to TwitterShare to FacebookShare to Pinterest
Libellés : books, literature, technicals, United States of A.