Johnson Smith was a mail-order company established in 1914 in Chicago. Besides a catalog that became thicker and thicker through the years, the company put ads in magazines: one or two pages full of novelties. As a best seller, the Magic Nose Flute (Humanatone) tin nose flute frequently appeared in magazines devoted to children and young adults, like Popular Mechanics, which is totally consultable here, from 1905 to 2005 issues. 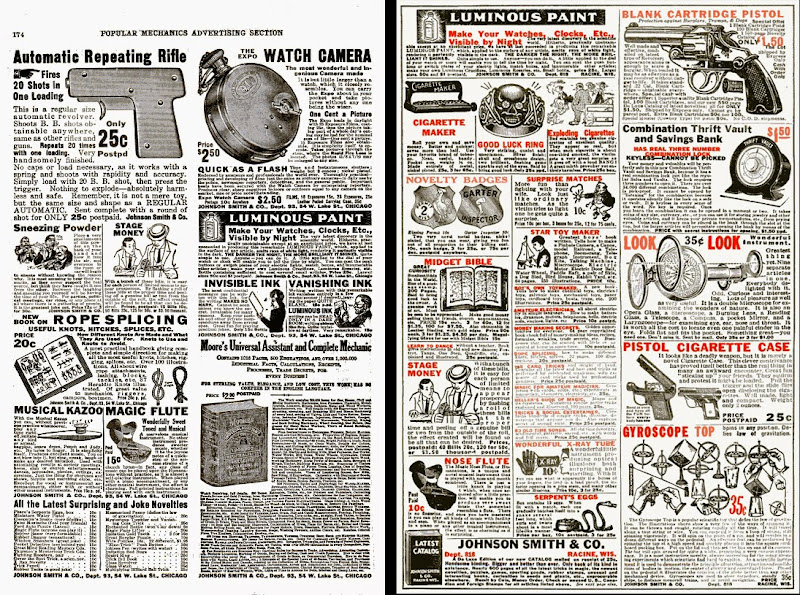 The first advertisement by Johnson Smith in Popular Mechanics mentioning the Magic Flute was published in Jan. 1917. It was a simple line in a list of the "Latest Surprising and Joke Novelties". The price of the Humanatone was 15c, and it was listed at 7th position. In September, it gained one rank, when the "Big Roll Stage Money" was removed. 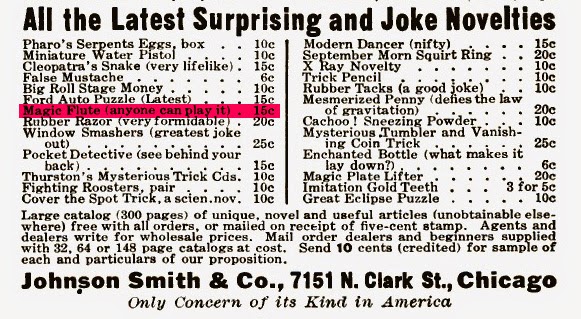 But the real first individualized « Magic Flute » ad in Popular Mechanics dates of November 1917, and is followed by the December one, already different in its typo and lay out. It features an engraving of the flute internal side that was used all the years along. The text and the image clearly express the identity Magic Flute / Humanatone. What happened then? I don't know, since the archives from 1918 to 1920 are not accessible on Google.

But when the archives are available back, there are no more ads for the Humanatone, from Jan. 1921 to Sep. 1922. Then, the same ad is published 3 times, but curiously not in December (is it linked to the 1922 company move from Chicago, Ill. to Racine, Wis.?) The text has been rewritten and the price has raised from 15c to 25c! 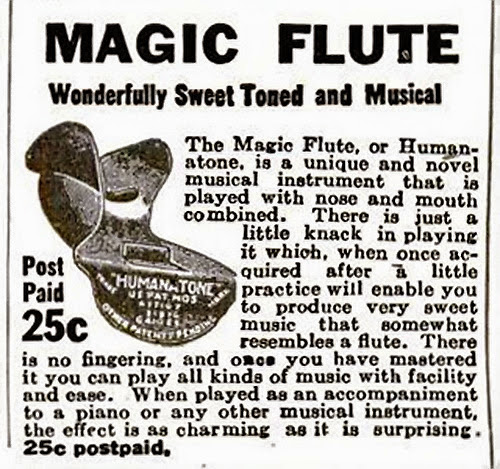 Text and price have stabilized when the campaign restarts in November 1923. It will last 53 months before stopping again. Anyway, some Johnson Smith pages in Popular Mechanics were pimped with a color touch... The first one was published in Feb. 1925, with a red titling, which will appear, disappear, reappear ... with a focus on the 2 last months of the year, but not only: the full year 1927 shows this red title.
In March 1927, the price suddenly fell down back from 25c to 15c.

And 5 months later, in August 1927, was raised again to 25c! At the same moment, the headline « Wonderfully Sweet Toned and Musical » was removed, modifying the proportions of the Humanatone ad. For Christmas, Johnson Smith tried an orange background to attract more customers. 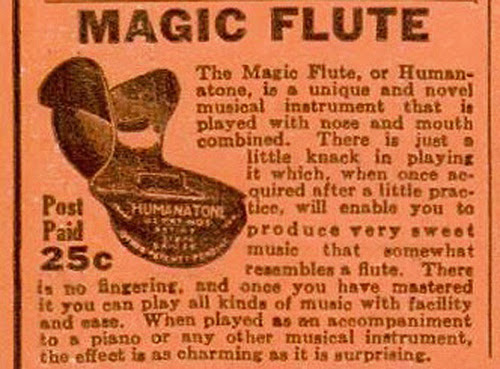 No Magic Flute advertisement from April to November 1928. But when it reappeared, it had gotten a lifting. The name is now « Magic Nose Flute ». The text is still the same, but the word "Nose" has been added between Magic and Flute. More, the stampings visible on the flute (Humanatone and patents) have been erased. And the price has dropped from 25c to 10c! What does it mean? The trade-mark Humanatone is still present in the text... Maybe did Johnson Smith distribute nose flutes not Humanatone stamped (but also produced by the Humanatone Co.) and was it to solve a "contractual picture" issue ?

In February 1930, the "Magic Nose Flute" became the "Nose Flute". Apparently, the removal of the word "Magic" in the title allowed to place the illustration a bit upper, and be able to print the engraving showing the J. S. catalog a bit bigger.

There were no Humanatone ad by Johnson Smith from May 1930 to March 1931. When it reappeared, it was unchanged and stayed alike till Aug. 1931 (it then got a red title during 4 months). But in December 1931, the text got some changes, in order to reduce the advertisement surface: the ending was cut ("When played as an accompaniment to a piano or any other musical instrument, the effect is as charming as it is surprising.")

The last Humanatone ad that Johnson Smith published in Popular Mechanics was in the March 1932 issue. Anyway, the mail-order company continued to propose the Humanatone in its own catalog, during many many years (check this post for instance)

I made a table with all the occurences I've been able to find: 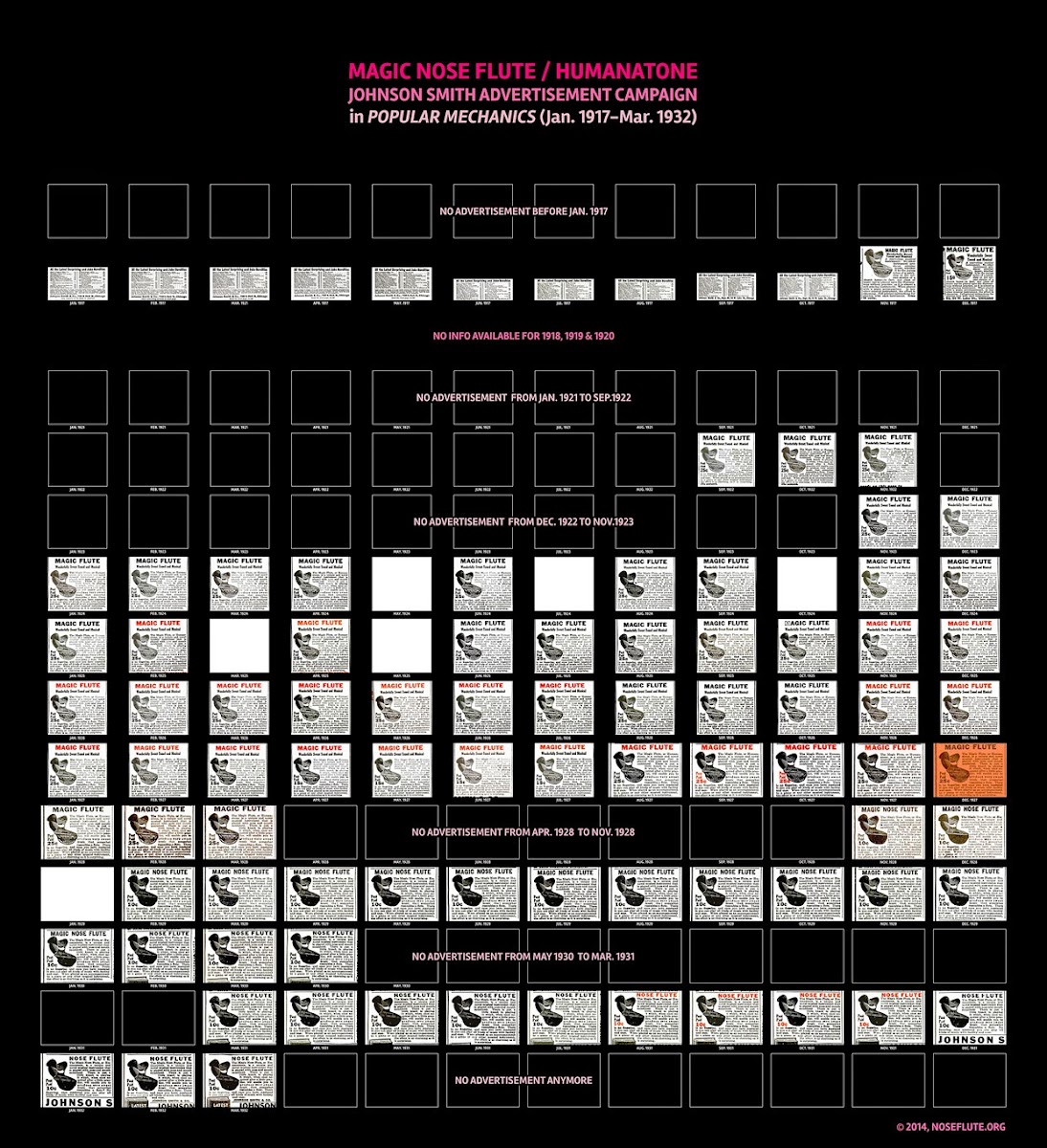