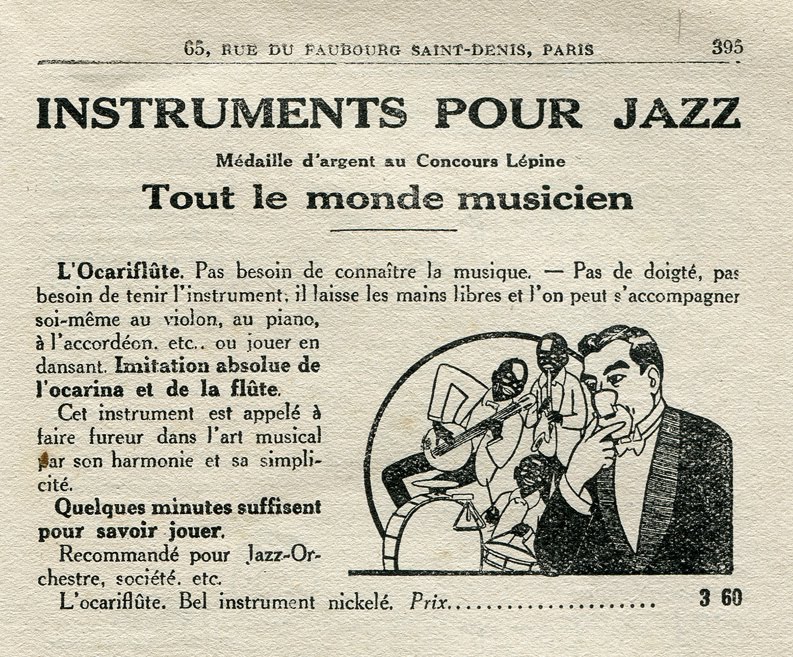 Earlier, another (or the same...) instrument called Oclariflûte, with a "L" after the "C", had appeared in the catalogue of the Manufacture générale d'Instruments de Musique (unkn. date). It is classified as a Jazz instrument, but also as a toy ("Jazz-Jouets"). It is proposed through several versions: tin, nickel plated or luxus, for jazz. 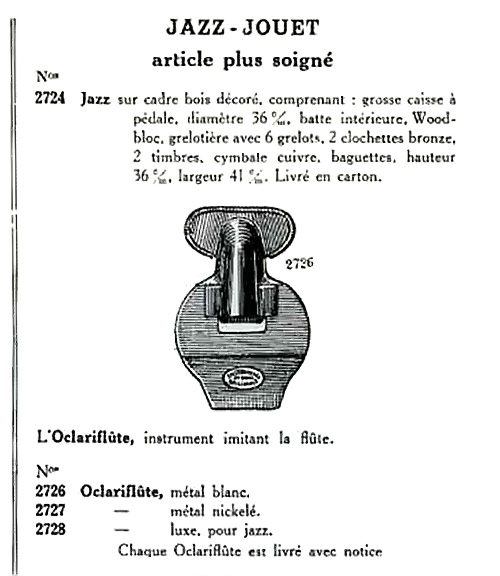 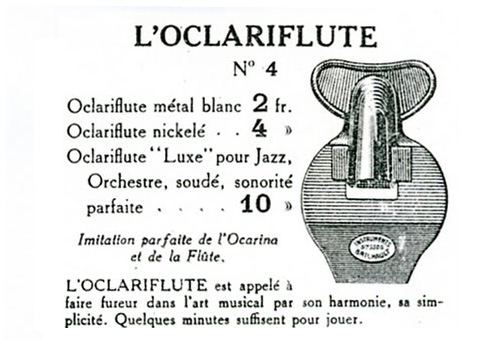 On this lastad, we can clearly read on the flute: "Instruments Brilhault" and in-between the 2 words: "BT. SGDG", abbreviation of "Breveté Sans Garantie du Gouvernement" (patented with no government warranty). So, the baby was patented (but I found no trace of its file).

The instrument looks like a regular metal nose flute, with one specificity: the shape of its mouth shield which, contrarywise to almost any other flute, is not rounded at its bottom, but presents a kind of square heel.

There is no doubt that the Ocariflûte and the Oclariflûte were the same instruments.

On the first ad, one can guess the shape of the Oclariflûte heel... 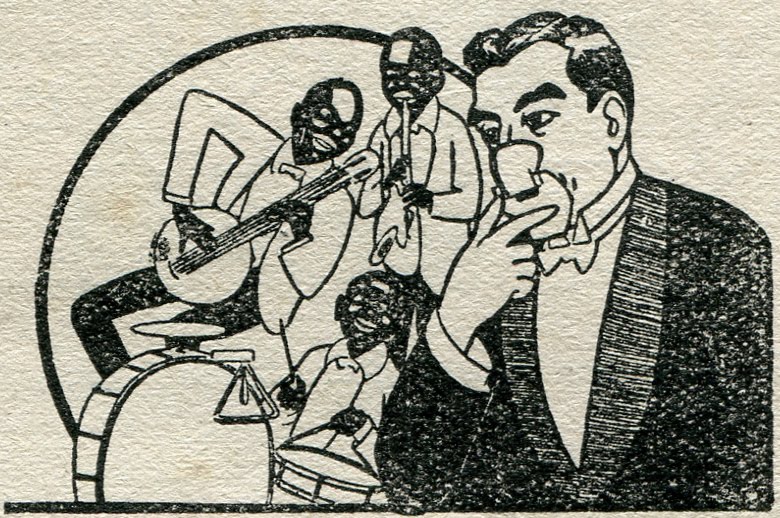 But more: here is an newspaper article published Sep. 27, 1923, in the Figaro and about the famous Concours Lépine (inventions contest). The paper says: « L'Oclariflûte. This sensational novelty still gets a huge success at the Concours Lépine. It is very difficult to approach this booth, where the crowd makes a real rampart to listen to this little instrument. Everybody will become a musician with this novelty, unique in its type. Nickeled instrument, 6 francs, nickeled copper, 8 francs, and grand luxus item, 12 francs, in a case with user manual...» 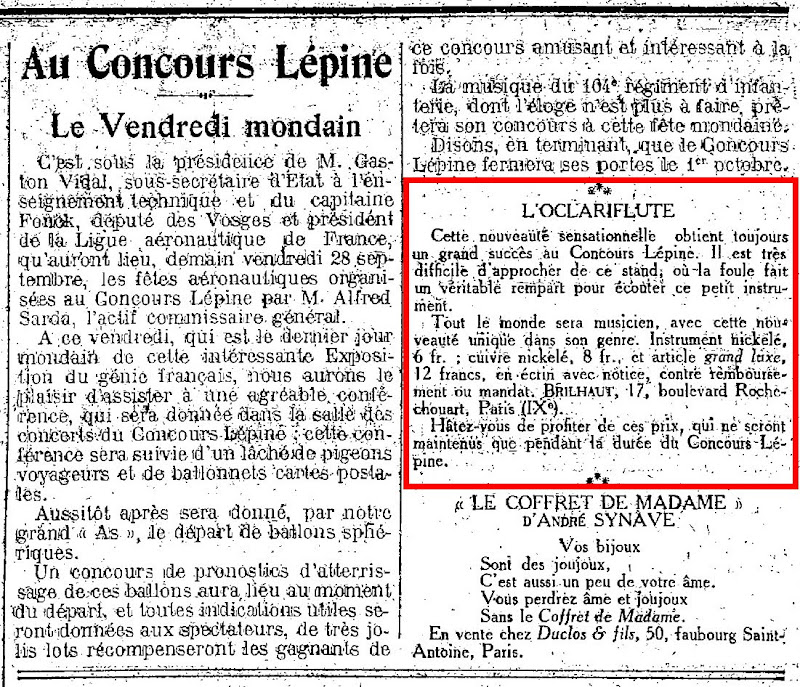 And if you look back at the first advertisement, you'll notice the title is underwritten by « Médaille d'argent au Concours Lépine » (Silver medal at the Lépine Contest). I think this is a definitive evidence that Ocariflûte and Oclariflûte were the same.

So, a nose flute got a silver medal at the Concours Lépine, in Paris, 1923!
For sure, I contacted the current Lépine contest organization to ask if they could find something in their archives (a name, an address, an occupation... for the inventor). Unfortunately, I haven't got an answer yet.

But we know the name of the company who sold (and probably manufactured) the Oclariflûte: Ets. Brilhault, 17, boulevard Rochechouart, Paris IX. (The Figaro made a spelling mistake in the name, writing "Brilhaut" instead of "Brilhault", missing the "L").

Now, why the two names, with or without a L?

I am quite sure this came from a trademark issue. The nose flute was named Oclariflûte in 1923 (at Lépine Contest). Maybe the inventor wanted to name his nose flute without the L"... but there was already a wind instrument called Ocariflûte! It was metal ocarina shaped like... a flute, and patented by another musical manufacture in Paris, the Ets. Mathieu. 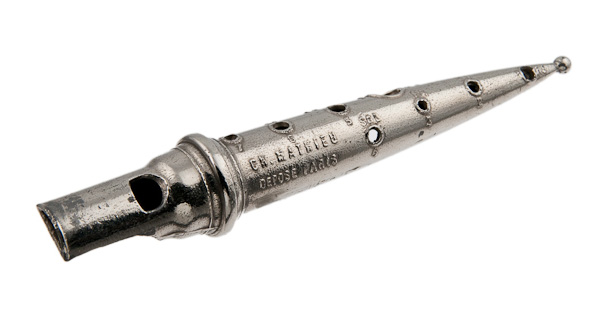 But in the 1930 catalogue, the nose flute is called Ocariflûte. Were the rights over the name Ocariflûte over? Or did the Ets. Mathieu sell the brand to Ets. Brilhault?

It seems that the Mathieu's ocarina was sold from the early 1890's until the beginning of the 1900s. But I also found that the brand Ocariflûte had been registered in 1901 and 1916 by:

Ch. & J. Ullmann were instruments makers and big distributors: in 1907 their catalogue is composed of 13 volumes! ... and they are the successors of Lecomte & Mathieu Co. The same Mathieu who invented the Ocariflûte-ocarina. In the 1907 catalogue, 9th part (Toys intruments), one can see the Mathieu's ocarinas, but for sure, no nose flute (they have not appeared in France yet). 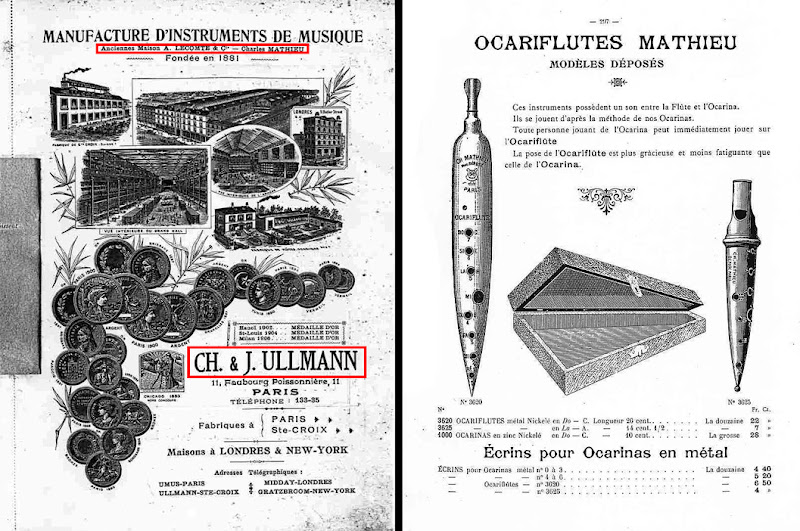 So, the brand was owned by the Odeon company in 1916, but I don't know if it was registered only for recordings or also for musical instruments. Anyway, it's more than likely that the name was still registered in 1922-23, when the nose flute by Brilhault was issued.
Publié par UkeHeidi à l'adresse 11:51 AM