It's a long time I've been wanting to experiment with casting nose flutes. As a model, I chose a Bocarina™, because I love those babies, because they are easy to disassemble and because they are produced by ABS injection... in a mould.

My goal is not to forge a Bocarina™, and certainly not to make a market with that (anyway, moulding and casting is much more expensive that buying the original nose flute!). Chris Schuermans had authorized me to experiment with a mould. Indeed, my goal is purely recreational.

Melted pewter turns purple, then brownish when it's time to remove this oxydized layer and cast. 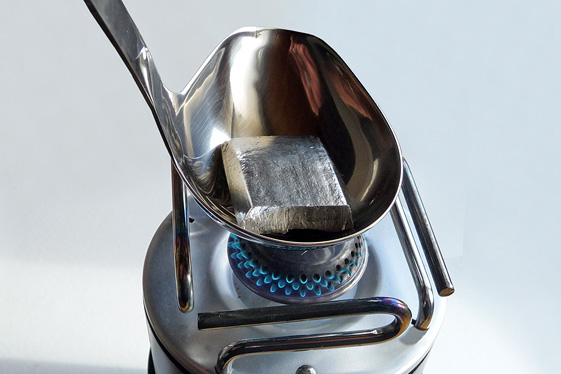 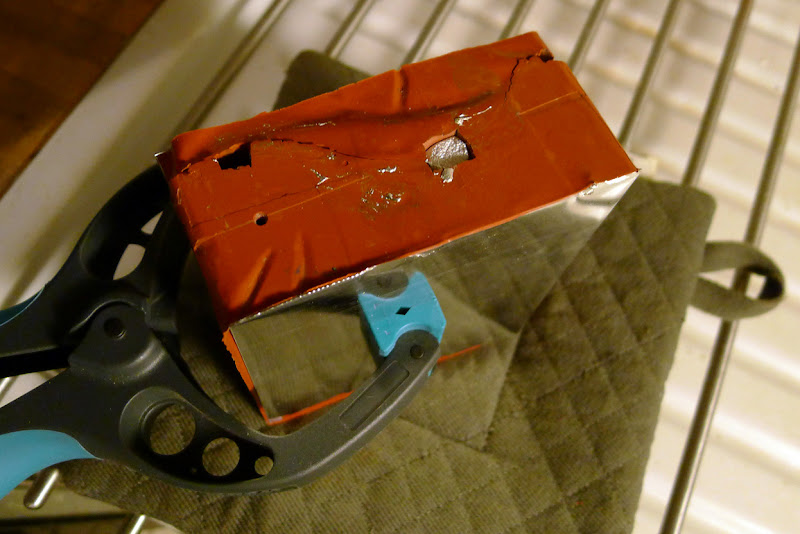 That's how I got my Pewterina! 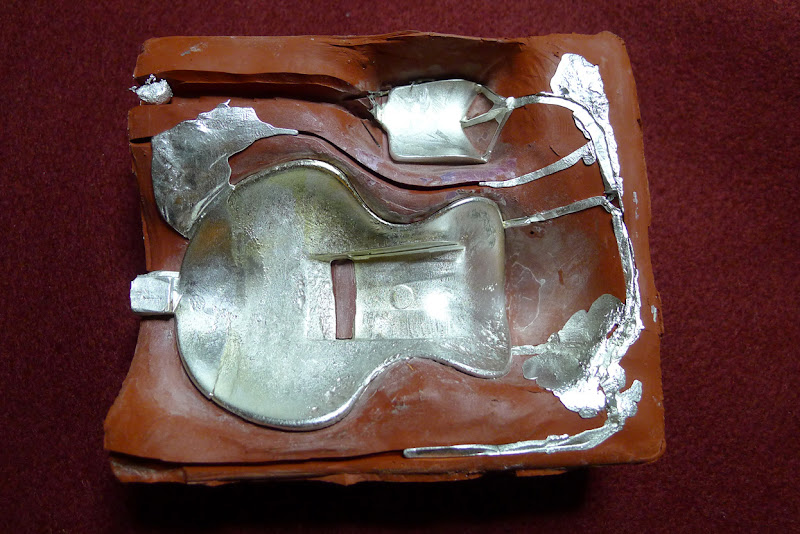 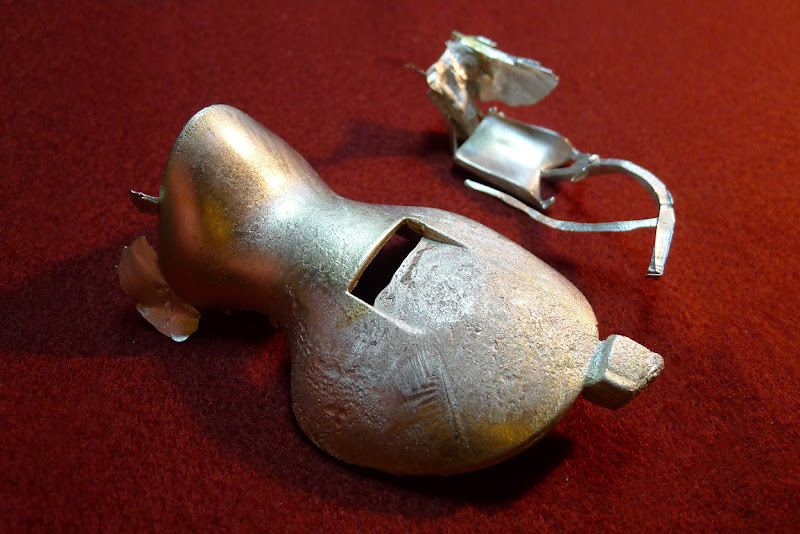 After some cleaning, deburring and sanding, I got a huge piece. Rather smooth at the top and covered with little craters on the shield, probably due to a bad cooling off. However I found it funny like that and didn't melt the nose flute for a retry. 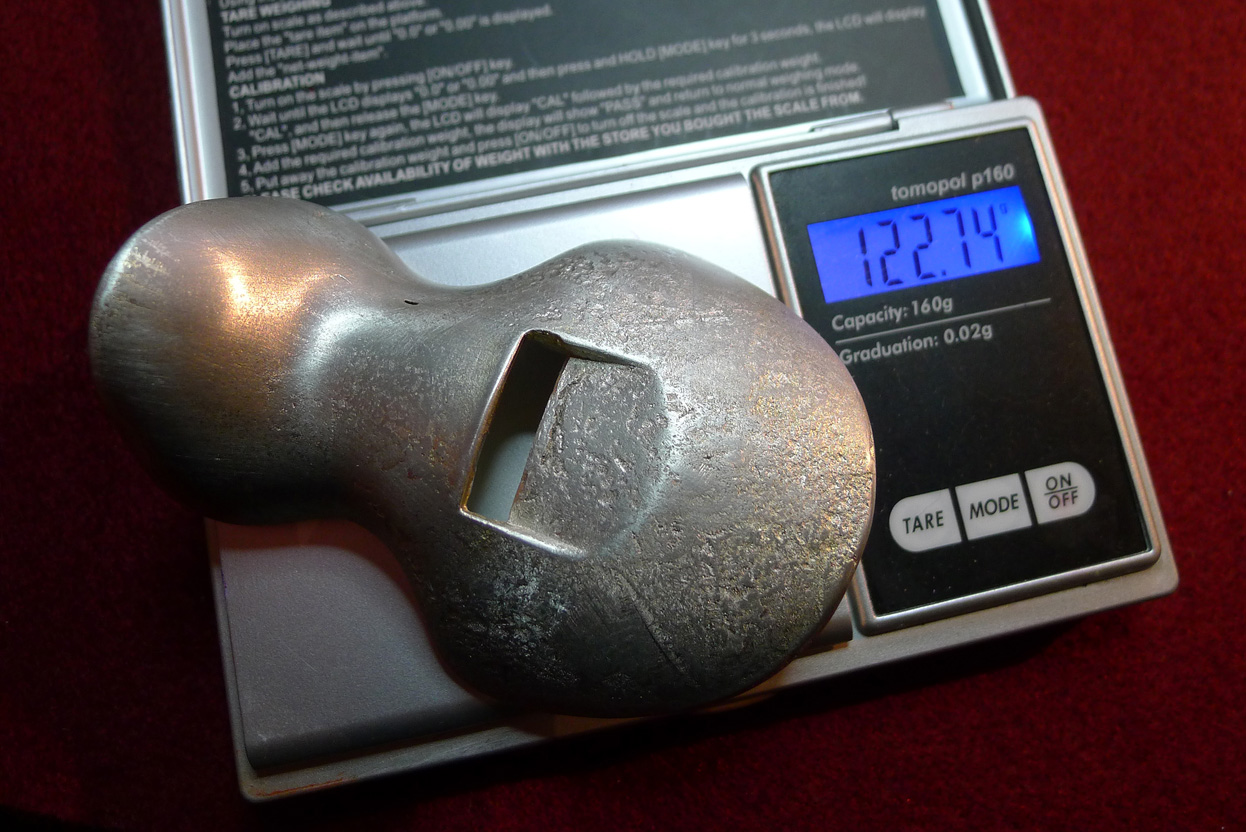 And here is the Pewterina in the sun: 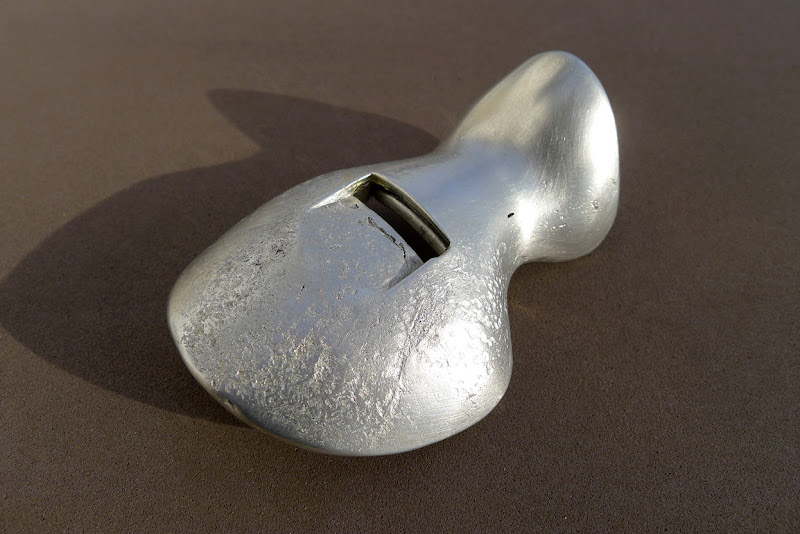 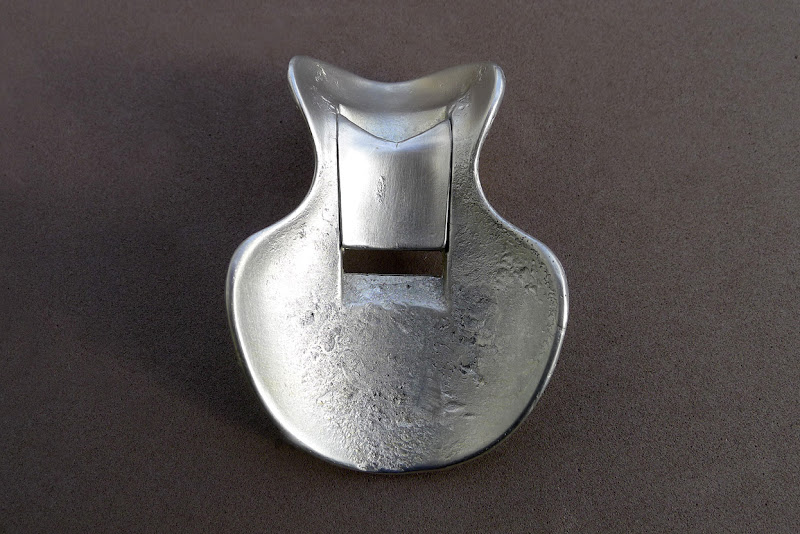 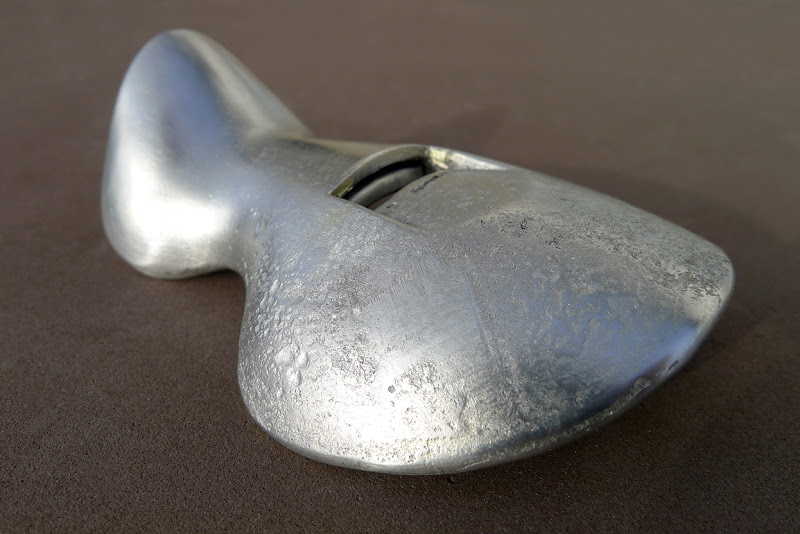 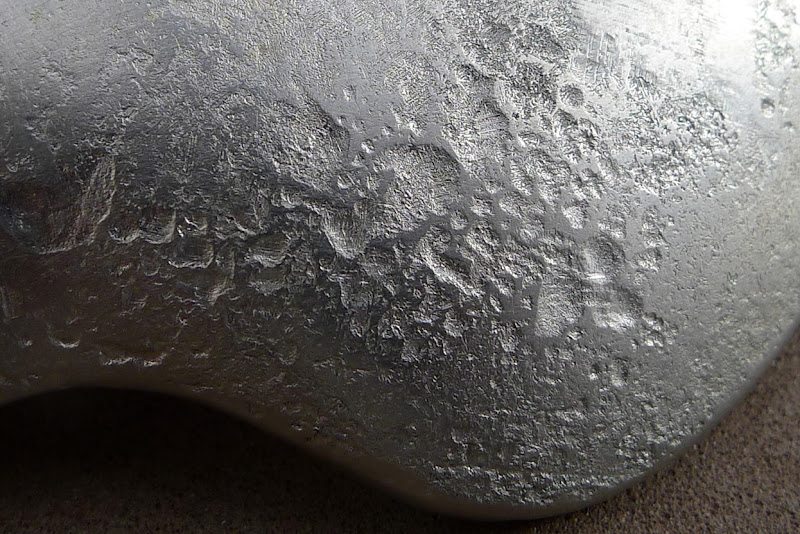 That what not enough. I remembered I had somewhere a Cerrosafe ingot. The Cerrosafe is a low fusion point alloy, mainly used in armory to take the imprint of the inside of a rifle barrel. Indeed, this alloy retracts a little bit while hardening, providing the possibility to get the imprint out of the barrel. But what is interesting is that the Cerrosafe has a 70-88°C (158-190°F) fusion point. It means that you can melt it by dipping a bit in hot water!
The problem with Cerrosafe is that it is a hazardous alloy. It notably contains 37.7% of lead, and worst, 8.5% cadmium, which is a real poison: "The most dangerous form of occupational exposure to cadmium is inhalation of fine dust and fumes, or ingestion of highly soluble cadmium compounds. Inhalation of cadmium-containing fumes can result initially in metal fume fever but may progress to chemical pneumonitis, pulmonary edema, and death." You see? And it kills the kidneys, etc. Check this for fun.
Well, I decided to sacrifice myself for nose flute cause. 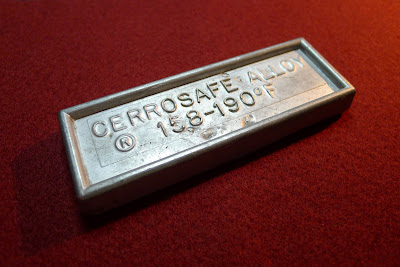 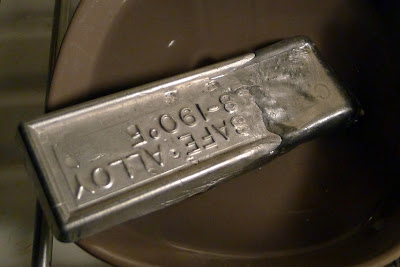 But it is obviously easier to cast the alloy while melted with fire, so I managed like I did with the pewter. 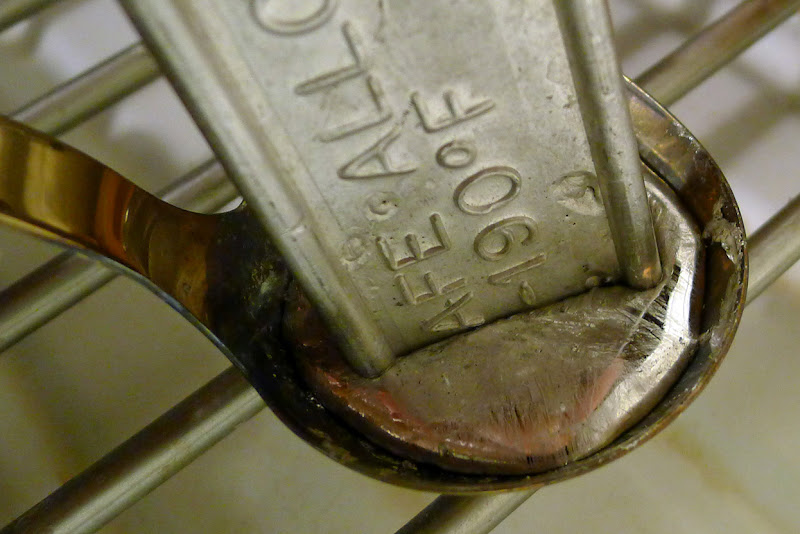 I unmoulded the flute, and immediately named it Borgiarina, the poisonous. 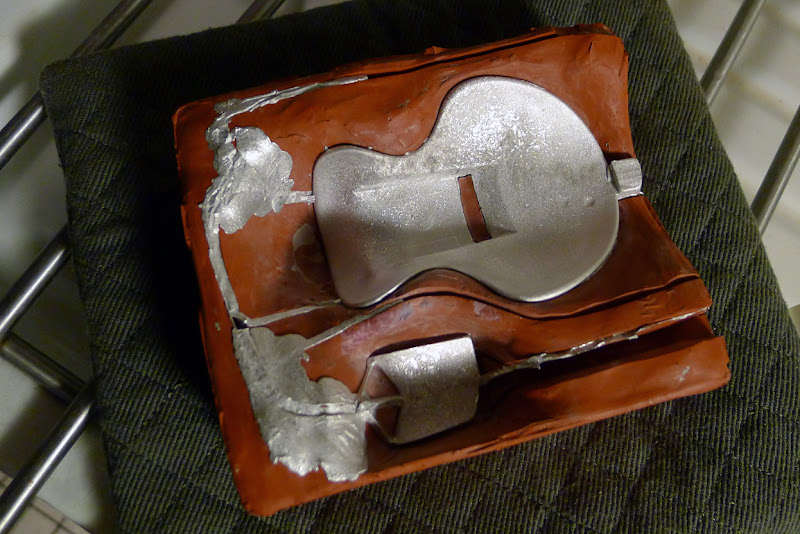 I had the wonderful surprise to discover that during the hardening phasis, the alloy had literally crystallized in a concretion of zillions of incredible tiny needles! Absolutely outstanding!

The Borgiarina weights tons! My precision scale is over loaded, and the postal scale indicates 170 g (6 oz)! 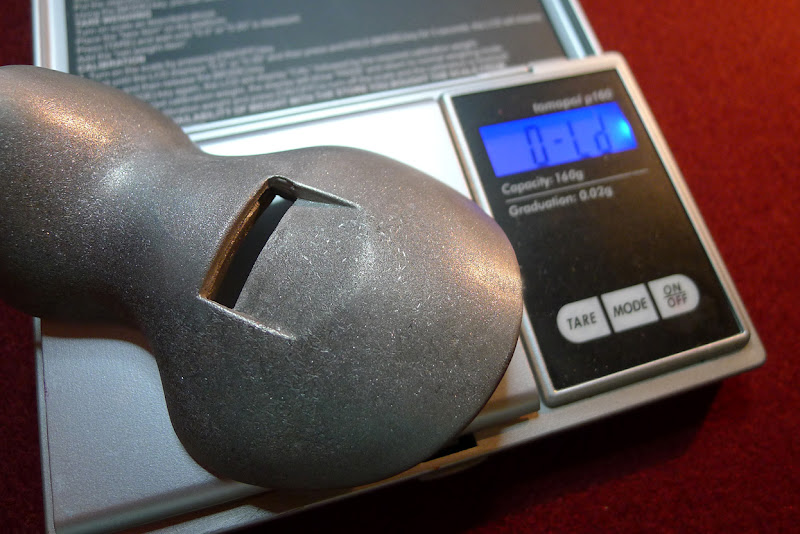 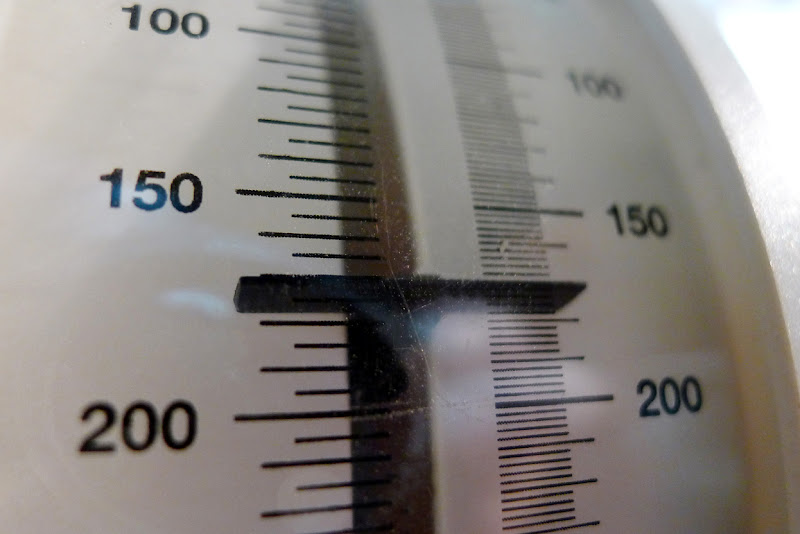 And the killer in the sun, with it sparkling needles: 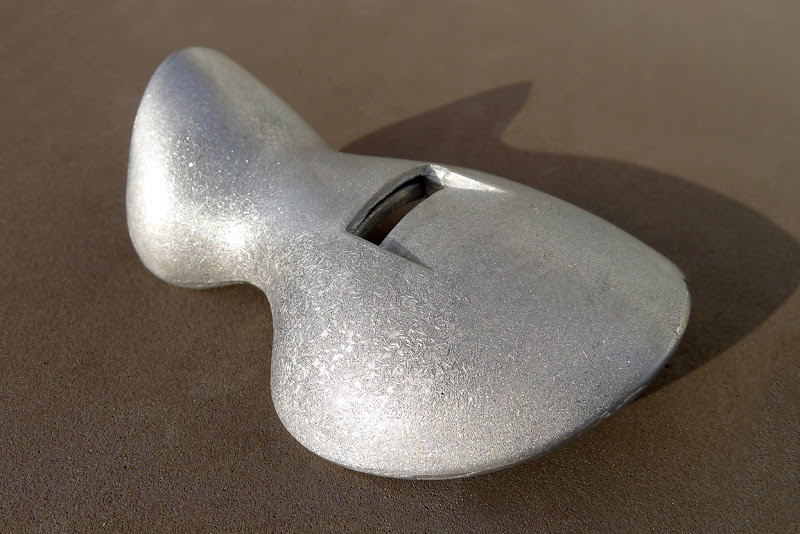 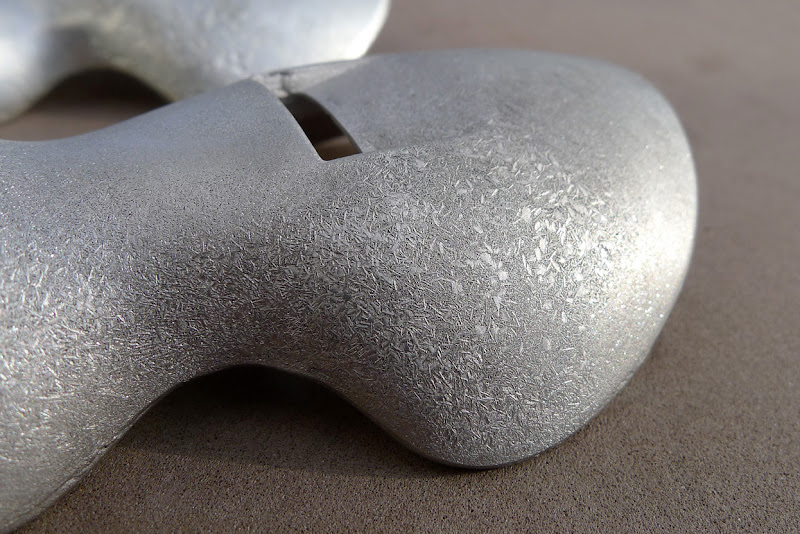 I coated both the Pewterina and Borgiarina with a thin varnish, just in order not to get a lung cancer and kidney lesions before the end of this post.

Then I made a sound test.

Wowowowow! both alloy babies are incredible. The great Boccy sound... plus huge power! Really incredibly loud sound (really had to lessen the usual input level on my Zoom recorder). Precise, quick with attack, and huge!

Here is a sound sample recorded with the Borgiarina:

And just for the eyes, 300 grams of nose flutes: 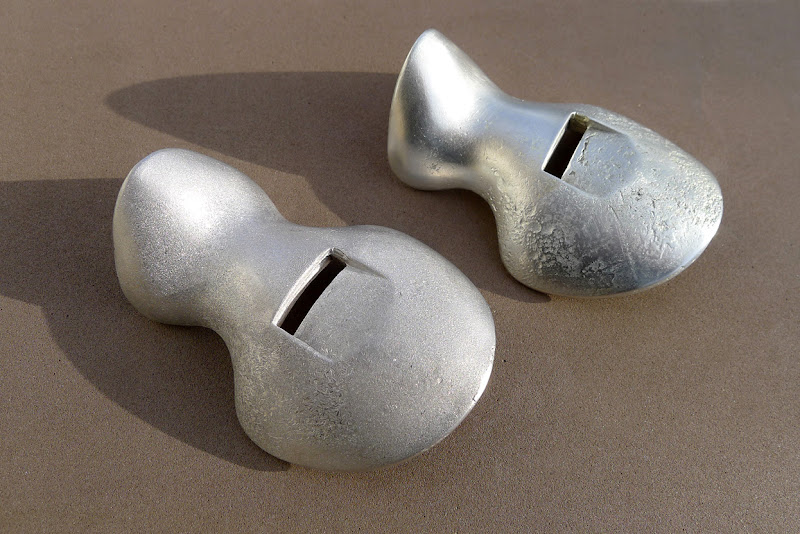 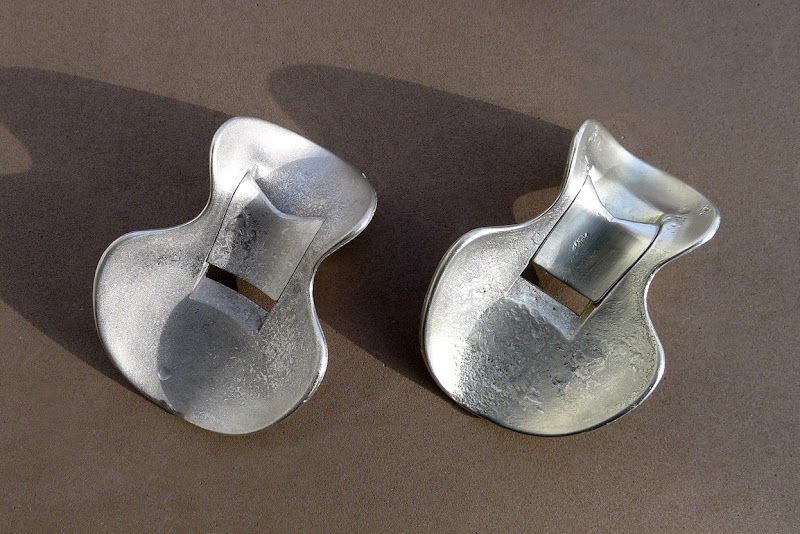 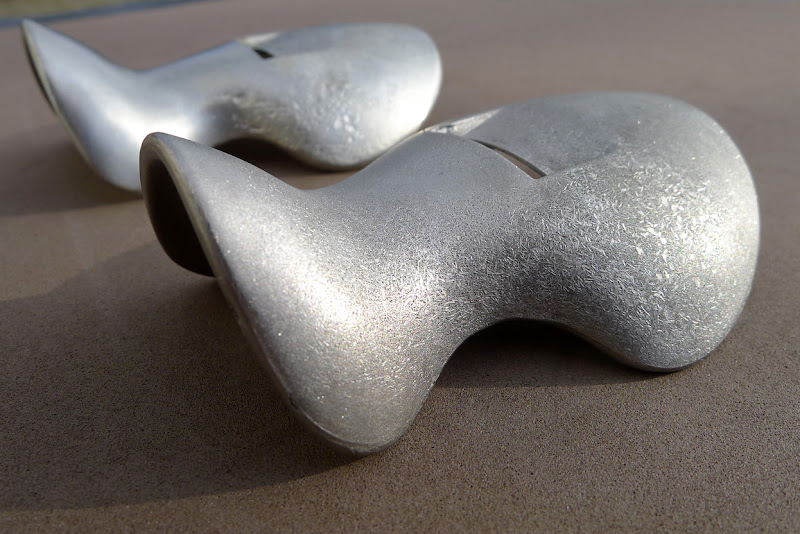