The Swan logo is the "second most famous" nose flute in the world, just after the Humanatone. However, "nobody" knows exactly when it was launched, and even... it's name!

Several days ago, a very fine Austrian man, Mr. Christian Steinbrecher, contacted me because he was interested in a 1911 music instrument catalog I had bought. We discussed a bit and had a very good relation through e-mails. Christian is a mandolin lover, and conducts historic researches about his favorite instrument. I told him that my quest was nose flute oriented, and he sent me a file, adding « Probably you know this but for being on the safe side, I attaché it! »

The file was the Swan patent. Dear Providence! 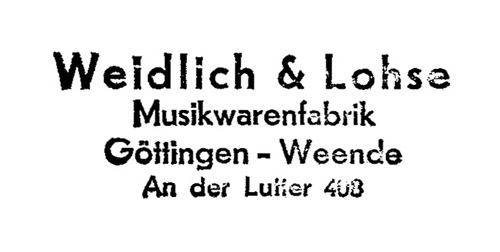 Weidlich und Lohse were based in Göttingen, precisely in Weende (just besides the Göttingen University). The company was specialized in the production of plastic musical instruments, but also in repairing accordeons. I have not been able yet to find more info about Weidlich & Lohse, but I found (thanks to Mr. Steinbrecher), 3 other patents published by this manufacturer. All of them four were filed within 2 months.

The first one is a "Druckzylinder mit Stimmen und Federeinsatz als Sockel für Figuren mit beweglichen Teilen als Spielzeug", which can be translated in "Pressure cylinder with voices and spring use as a base for figures with movable parts as a toy". The item is a funny plastic duck which, according to the drawing, opens his mouth and has his hat jumping when the springed base is pressed.
The second one is a "Flaschenverschluss", that is, a simple bottle cap.

Then, Weidlich & Lohse filed 2 patents on the same day. Both are small musical instruments : the Nasenflöte, and a "Kreisrunder Hohlkörper zun hineinsingen aus Plastik" ("Circular hollow body item for humming, made in plastics"), let's say a circular kazoo, which was called the "Summophon". 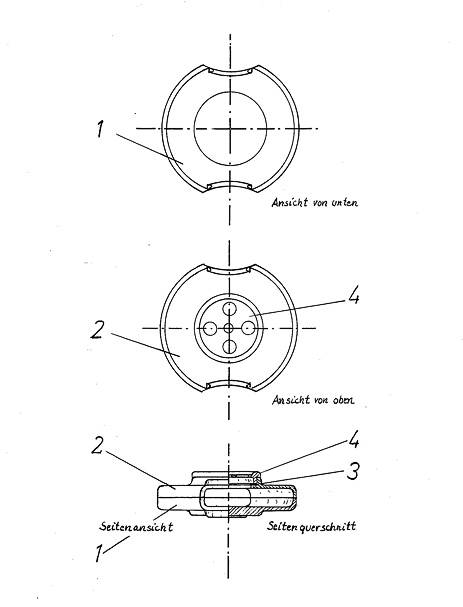 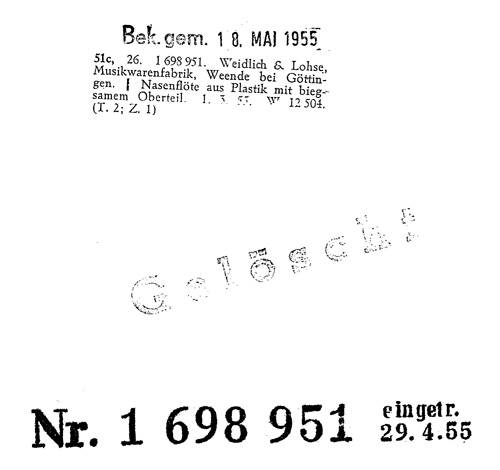 What is interesting is the object of the patent. For sure, Weidlich & Lohse wanted to patent a nose flute, but above all the new feature it provided : a flexible nose cap. Indeed, the title of the patent file is "Nasenflöte aus Plastik mit biegsamem Oberteil" ("Plastic Nose flute with flexible top part")

That is, approximately: "The subject to be registered is a nose flute. The flute is made of plastic, and it must in any case be blown with the nose. Above all, it comes with this instrument that the upper part (nose piece) is flexible. Thus, the technical innovation is characterized."

This innovation is provided "so that in each case, the opening is hermetically sealed.":

Very interesting, because as far as I know, there were no "Swan" nose flute with a particularly flexible nose cap...

Some technical drawings are provided after the description, and we can recognize the "Swan" flute as we know it : 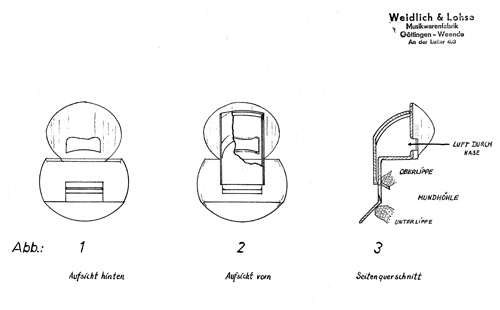 Identity and dates have been unveiled! Do not say "Swan from the 50s" anymore, but "Weidlich & Lohse, Göttingen, 1955". However, all the questions about this nose flute have not been answered yet. Notably regarding the current Chinese production.
And when did the Weidlich & Lohse Musikwarenfabrik stop its activities? When exactly did someone decide to relaunch the production? Who was that? Was it first in Germany, then in China, or immediately abroad?